In this action-packed sequel to Alien, Sigourney Weaver returns as Ripley, the only survivor from mankind's first encounter with the monstrous Alien. Her account of the Alien and the fate of her crew are received with skepticism - until the mysterious disappearance of colonists on LV-426 lead her to join a team of high-tech colonial marines sent in to investigate. Personally supervised by director James Cameron, this special edition includes scenes eliminated prior to the film's 1986 release which broaden the narrative scope and enrich the emotional impact of the film.

Hot off the success of 'The Terminator,' James Cameron directed a follow-up to Ridley Scott's film and took the storyline in a slightly different direction. Making it completely his own, while still maintaining its roots as a direct sequel, Cameron injected a heavy dose of action and adventure. In fact, 'Aliens' pretty much raised the bar in that area, which is a striking contrast to the intense horror elements of the original. The movie is also vastly unique and distinct from the 'Star Trek' and 'Star Wars' movies many were cheering for at the time. Much like its predecessor seven years earlier, this sci-fi feature surprised audiences everywhere, using standard genre tropes and then defying them. Living up to its tagline, "This Time It's War," 'Aliens' is a brash, bare-knuckle display of frenetic action and grandiose violence that, surprisingly, is just as good as Scott's film.

If the first movie can be described as "Jaws in space," as O'Bannon once put it, then Cameron's sequel is essentially "Rambo in space." Instead of a commercial freighter crew battling one vicious monster, a gung-ho, trigger-happy Marine Corps will face off against an entire horde. Part of the excitement comes from watching the soldiers interact aboard the warship Sulaco, their aggressive and combative attitudes being a big focus of the first half. Led by the inexperienced Lt. Gorman (William Hope), the colonial marines refuse to show any fear or apprehension before landing on LV-426. They display a disregard for Ripley's caution and a lack of respect for the danger they're about to encounter. But both Ripley (Weaver) and the audience understand the seriousness, which creates tension and concern. Once they meet their enemy, and most of the team is killed in a matter of minutes, the mission of those reminaing is suddenly one of survival, rather than the seek-and-destroy attitude seen earlier.

What ultimately works best — that is, other than the exciting action — is Cameron carrying over and expanding on many of the same themes explored in Scott's amazing work of horror. In 'Aliens,' the Weyland-Yutani Corporation is given a personhood through talking head Carter Burke (Paul Reiser), a guy who immediately rubs us the wrong way. Whereas the first film only mentions human life as expendable and preserving an alien specimen as priority, this follow-up now turns it into a focal point of soulless corporate greed. Amid all the death and chaos, the company seeks to protect its investment and sees potential profit in the biological weapons area. In this gloomy and miserable future, even the military has been privatized for further commercial opportunities. Ripley is once again forced to battle two types of monsters and helped by Corporal Hicks (Michael Biehn), Vasquez (Janette Goldstein) and Hudson (Bill Paxton). 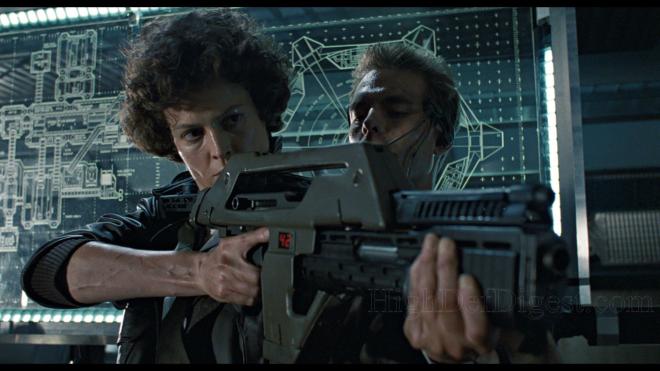 By placing our tough heroine in the middle of this harsh reality, Cameron is also able to expand on Ripley's character as a strong female voice. Just as in the previous film, she is compelled to prove herself as a woman within a masculine society, which is in sharp contrast to Vasquez's just-one-of-the-boys appearance and posture. In introducing little Newt (Carrie Henn) to the storyline, Ripley takes on a larger, more powerful role, readily accepting a maternal place without leaving behind those characteristics we've already come to admire in her. Indeed, this new attribute of protecting the child — who later eventually calls her "mommy" — from the other violent, monstrous mother, makes her more of a determined and confident hero than the soldiers. Ripley's relationship with Hicks and Bishop (Lance Henriksen) shows a masculine presence that can live peacefully alongside her, listen to her, and work as equals.

And just as in Scott's horror masterpiece, Cameron's 'Aliens' can be enjoyed for the intense action and suspense alone. But for someone like myself, it's these aspects and qualities of the film which make it a well-crafted classic of science fiction. The 1991 Special Edition cut of the movie retains this same feel, if not actually making it more apparent to viewers. Most of the extra seventeen minutes in fact seem to add depth and motivation to the Ripley character, such as an early scene with Burke where the two talk about her daughter. It is later mentioned during an intimate moment with Newt, and the idea provides weight to their emotional hug at the end. Other scenes are neither here nor there, information that fans can do without, like Newt's family discovering the alien spacecraft and Hudson's "state-of-the-art" speech. Either way, both cuts are equally enjoyable in my book, and the theatrical version is a classic sci-fi actioner with brains.

20th Century Fox Home Entertainment brings the awesome sci-fi sequel to Blu-ray as a single-disc standalone, as part of the film's 30th Anniversary celebration. The Region Free, BD50 disc is housed inside a blue, eco-cutout case with a code for downloading a Digital HD Copy.

It arrives an attractive and sturdy side-sliding slipcover made of a hard cardboard material with glossy artwork. The package is joined by ten shiny postcards and a 24-page booklet featuring awesome artwork from Dark Horse Comic's Aliens comic book series. At startup, viewers are taken directly to an interactive screen with the usual menu selection along the bottom on top of a faux computer screen displaying various layouts and schematics in connection with the movie.

The classic sci-fi actioner assaults Blu-ray with the same, somewhat controversial AVC-encoded transfer as the one seen in 2010's Anthology box set. Exhibiting plenty of natural film grain throughout, the stunning and spectacular 1080p picture shows astounding resolution and clarity in the clothing, weapons and exposes intricate, distinct lines in the architecture of the Hadley's Hope colony. Facial complexions display amazing lifelike definition and texture. Blacks are deep and penetrating, often rich, while contrast levels are crisp and precise. The balance is so good, in fact, that early sequences in space can easily serve as demo-material for calibration purposes. Shadow details are also superb and revealing. Colors are deliberately limited, but accurately rendered, especially in the primaries, with strong variation in the palette.

The one major caveat in the entire presentation is also a rather significant change from all previous home-theater releases, something Cameron mentioned in an interview while touting this new restoration. Of course, the application of some digital noise reduction and sharpening is a considerable alteration for fans and purists, as it is quite noticeable in a couple scenes. However, it's not obtrusive or distracting enough to ruin the movie. The issue here is with the change in color timing, from warmer redish hues with a strong blue push to an obvious green-teal appearance with orange hues. This is most apparent when characters arrive on LV-426 in Chapter 9 and at the beginning of Chapter 11 when the team walks around the research lab.

Nevertheless, since this was scanned from the original camera negative, the high-def transfer is beautiful and remarkable on Blu-ray.

As with the video, James Cameron's follow-up to Scott's horror landmark lands with the same excellent DTS-HD Master Audio track that appears, for the most part, faithful to the original design.

This is understandably a front-heavy presentation with great fidelity and acoustical presence. Dialogue reproduction is terrific, even amid the loudest moments. Channel separation and movement feels expansive and convincing, creating a spacious and engaging soundstage. Sharp, room-penetrating dynamics exhibit plenty of clarity detail, keeping things lively and entertaining, while the low-end packs a clean, responsive wallop during explosions. Rears are not always active, but subtle ambient effects are employed on occasion to enhance the soundfield and can envelop the listener satisfyingly. James Horner's musical score receives the biggest upgrade by spreading to the background evenly, adding to the imaging and pulling viewers into the action persuasively. Overall, 'Aliens' sounds terrific on Blu-ray.

Providing fans with more buying options, 20th Century Fox brings 'Aliens' as a single-disc package, a separate standalone from 2010's impressively attractive six-disc box set. James Cameron's sequel is arguably the best and most impressive follow-up, delivering a suspenseful thrill-ride of action and adventure. It's a rare treat to enjoy a sequel that's as good as its predecessor and still hopes up after four decades. To celebrate the film's 30th anniversary, the Blu-ray arrives with the same, excellent audio and video presentation as the one seen in the aforementioned box set. With a good set of bonuses and a cool interactive feature, the overall package is recommended for those who decided to wait for a standalone release.