"No Bill, I don't think I ever will get married," confesses popular advice columnist Kathy Ferguson (Barbara Stanwyck). "It's propaganda. Not for me." But Kathy's mindset quickly changes when she falls hard for police detective Bill Doyle (Sterling Hayden) and marries him with every expectation of being a devoted and supportive wife.

At first, Kathy enjoys her new role of suburban homemaker, but before long she tires of her mundane existence which is exacerbated by Bill's lack of ambition. To fix her dilemma, Kathy schemes to further Bill's career by any means necessary. Her plans are soon thwarted, however, when an expected promotion for Bill doesn't materialize and causes her to take matters into her own hands… in the form of a gun.

To many in the 1950s, suburbia was nirvana. Safe neighborhoods with modest homes, manicured lawns, wholesome families, and an air of comfort and security represented both the attainment of the American Dream and a Never Never Land for those who survived the Depression and World War II. Yet the tranquility and contentment of that environment, which advertising and TV sitcoms ceaselessly promoted, wasn’t as homogenous as we were led to believe, especially for women. The notion of the “happy housewife” may have been popular and prevalent, but was it realistic?

Crime of Passion, a slick little film noir from director Gerd Oswald (A Kiss Before Dying), incisively questions the cozy ideal of suburbia and exposes the vapid values and asphyxiating constraints that can drive intelligent, ambitious women insane. Though the film eventually devolves into an hysterical melodrama, it delivers a heavy dose of social criticism and takes an aggressive feminist stance, both of which make it more relevant than other movies of the period in its class.

Kathy Ferguson (Barbara Stanwyck) is an aggressive, confident career woman who’s used to living life on her own terms. As a successful newspaper reporter with a San Francisco daily, Kathy goes after what she wants and is willing to fight and finagle to get it. Men don’t intimidate her, and she enjoys competing in their rough-and-tumble arena, despite the pervasive sexism and misogyny. “Your work should be raising a family and having dinner ready for your husband when he gets home,” an indignant policeman sneers at her after she confronts him about an investigation. Yet while other women might wilt in the face of such withering condescension, tough-cookie Kathy just turns the other cheek and forges ahead.

Quite unexpectedly, the femininity Kathy has long suppressed resurfaces when she falls under the spell of average-joe cop Bill Doyle (Sterling Hayden). After a whirlwind courtship, she impulsively chucks a dream job to marry Bill, and for a brief spell, enjoys playing the part of the “little woman” who’s pampered and protected by her big, strong husband. All too soon, however, that role becomes stale, and she refuses to remain compliant and complacent like her all-too-accepting and subjugated girlfriends to whom she feels vastly superior.

Unwilling to sublimate her personality, dumb herself down, indulge in frivolous pursuits, and endure endless hours of idle chatter, Kathy focuses all her energies on escaping the small-minded suburban life and elevating her husband to what she believes is the stature both of them deserve. She pressures Bill to make something more of himself, and when he seems ambivalent, she brazenly grabs the reins and stops at nothing to manipulate situations to his advantage. Yet her dream is not his dream. And when Kathy transfers her insatiable ambition to Bill and becomes obsessed with shoving him into a mold he can't abide, all so she can attain a higher level of stature and move to a nicer address, she puts her marriage and future in jeopardy.

The relatable themes of Crime of Passion hit home and Jo Eisinger’s screenplay thoughtfully presents them, but the contrived plot often dilutes their impact. While Kathy’s motivations and attitude shifts are well depicted, her rash actions and abject desperation rarely seem credible. Women on screen will do almost anything to protect their children or gain affection, but the lengths Kathy goes to and risks she takes simply to secure her husband a promotion go far beyond the realm of reality. And as a result, the titular and climactic crime of passion doesn’t pack the punch we expect.

Yet Stanwyck, as she so often did throughout her long and legendary career, saves the day. Middle-aged actresses of her era often had to settle for subpar vehicles, and Stanwyck was no exception. Crime of Passion is a perfect example of a film that’s not worthy of her talents, yet you’d never know it from her full-throttle, no-holds-barred performance. Ever the consummate professional, Stanwyck always gave 110%, and in one of her last leading lady roles she puts herself through the wringer. Raw intensity and a confidence that borders on ballsiness instantly grab attention and hold it for the film’s duration. Few stars are as authentic on screen as Stanwyck, who here combines feminine wiles with a masculine toughness to craft a multi-faceted portrayal that rings true even when the character’s actions don't. Though Kathy makes an unnecessary mess of her life, Stanwyck comes through it all unscathed.

Hayden specialized in playing rumpled, steel-jawed macho men over the course of his career, and (somewhat uneasily) starred opposite such other aging divas as Bette Davis and Joan Crawford. He and Stanwyck make a more comfortable pair, and even though she too is almost a decade older than he, the age difference doesn’t feel quite as pronounced. Hayden’s low-key acting style complements and tempers Stanwyck’s high-energy line readings, and the same can be said of Raymond Burr, who shares a couple of electric scenes with the star. Fay Wray of King Kong fame and Virginia Grey also perk up the proceedings in small but pivotal parts.

Oswald lends the film a noirish tint, nicely employing shadow patterns and efficiently depicting Kathy’s mounting frustration and desperation. Though his style may lack panache, he’s a good storyteller who keeps Crime of Passion rolling and on track from the first frame to the last. The film has its faults, but the actors make it entertaining, especially the silver-haired Stanwyck. It’s her passion that makes Crime of Passion come alive. 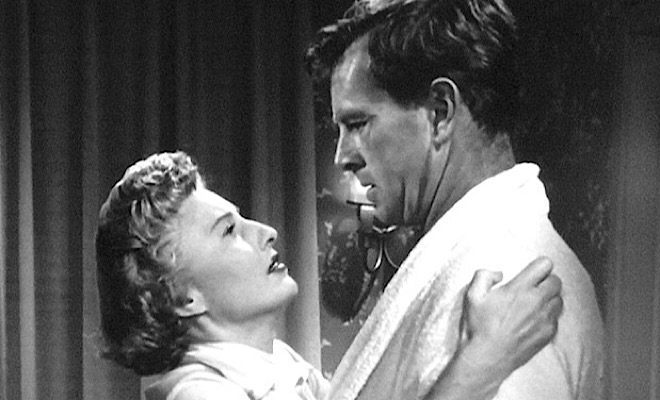 Crime of Passion arrives on Blu-ray packaged in a standard case. Video codec is 1080p/AVC MPEG-4 and audio is DTS-HD Master Audio 2.0 mono. Once the disc is inserted into the player, the static menu without music immediately pops up; no previews or promos precede it.

Nine-time Academy Award nominee Joseph LaShelle was one of Hollywood's elite cinematographers (he won his sole Oscar for 1944's Laura), and another sterling transfer from Classicflix appropriately honors his stellar work. The 1080p/AVC MPEG-4 rendering features solid clarity and contrast, a seamless grain structure that maintains the feel of celluloid, and a nicely varied gray scale that enhances details and provides a palpable sense of depth. A few scenes look a tad soft, and some stray nicks and marks dot the print from time to time, but none of the imperfections distract attention or detract from the overall excellence of the presentation. Blacks are rich, whites are bright, patterns remain stable, close-ups highlight facial features well, and the all-important shadows appear sharp and clean. Without question, this is the best home video transfer of Crime of Passion, and that's good news indeed for fans of Stanwyck, film noir, and classic Hollywood.

The DTS-HD Master Audio 2.0 mono track supplies clear, well-modulated sound. Some of the dialogue sounds a bit ragged around the edges, but all the tense exchanges are easy to comprehend. Subtleties, such as footsteps, are distinct, while sonic accents like gunfire and revving car engines nicely perk up the soundscape. A wide dynamic scale handles all the highs and lows without any distortion, and no age-related hiss, pops, or crackles intrude.

Sadly, no supplements are included on the disc.

Crime of Passion may not be one of Barbara Stanwyck's better known films, but this tidy, engrossing film noir showcases the type of natural, intense performance that defined the legendary star's career. Though Gerd Oswald's portrait of frustration, ambition, jealousy, and manipulation features finely drawn characters and explores stimulating themes, its formulaic plot never quite makes the grade and winds up deflating an otherwise admirable production. Classicflix once again delivers a strong video transfer and solid audio, but the dearth of supplements is disappointing. It's always a good day when a Stanwyck title hits Blu-ray, and those who admire this versatile actress - and one of Hollywood's great film noir heroines - will certainly appreciate her emotional workout in this underrated drama. Recommended.

Sale Price 37.95
Buy Now
3rd Party 37.95
In Stock.
See what people are saying about this story or others
See Comments in Forum
Previous Next
Pre-Orders
Tomorrow's latest releases