He had looks, charm... and killer instinct! Beneath his clean-cut looks... was a cold-blooded killer. Robert Wagner (Hart to Hart, The Pink Panther) gambled with his clean-cut image to play the ruthless, conniving killer in this unrelenting thriller co-starring Jeffrey Hunter (The Searchers), Virginia Leith (Fear and Desire), Joanne Woodward (Three Faces of Eve), Robert Quarry (Madhouse), George Macready (Gilda) and Mary Astor (The Hurricane). Based on the novel by suspense master Ira Levin (Rosemary s Baby, The Stepford Wives), A Kiss Before Dying is riveting, sure-fire entertainment you can't miss. Wagner is Bud Corliss, a darkly handsome college boy so obsessed with wealth that he d do anything to get it. When his rich girlfriend gets pregnant and is threatened with disinheritance, Bud stages her suicide, sending her plummeting from the roof of a high-rise. It's the perfect crime... until the dead girl s sister begins to unravel Bud's deadly scheme. Beautifully shot in cinemascope by the great Lucien Ballard (The Wild Bunch, The Killing) with top-notch direction by veteran Gerd Oswald (Crime of Passion).

"Haven't you heard, love conquers all."

Remember the Preppie Murder Case in the 1980s? The one where that filthy rich, despicably smug college dropout, drug addict, and sociopath brutally murdered one of his teenage hook-ups during supposed rough sex in Manhattan's Central Park? It was a sad, disgusting episode that shined a beacon on the most horrific aspects of humanity, and showed how wealth and privilege often foster an exaggerated sense of entitlement that poisons and corrupts our nation's youth.

Well, more than three decades before that heinous crime, author Ira Levin ('Rosemary's Baby') wrote a similar - and eerily prescient - story that won wide acclaim, as well as the Edgar Award for Best First Novel. And though the 1956 film adaptation of 'A Kiss Before Dying' omits a few notable episodes from Levin's book, it remains a surprisingly frank and uncompromising portrait of a ruthlessly ambitious social-climber who will stop at nothing to get what he wants.

And what he wants oh so desperately is money. Lots of it. A decorated war veteran blessed with dashing good looks and charm to spare, Bud Corliss (Robert Wagner) comes from a modest background, but his insatiable desire for the good life leads him to pursue Dorothy Kingship (Joanne Woodward), the unsuspecting daughter of a tough copper mining magnate (George Macready of 'Gilda'). As the film opens, Dorothy informs Bud she's pregnant. (The "p" word caused quite a stir in 1956 and was actually cut out of the movie for a Chicago preview.) She, of course, wants to get married at the earliest possible moment, but Bud is afraid her father will be so disgusted by the circumstances, he will disinherit her. Dorothy is willing to take the risk, but the last thing Bud wants is to be saddled with a wife and baby and live on poverty row. Though he feigns concern for Dorothy's well-being, Bud now sees her as an inconvenient woman who has foiled his master plan, and without a hint of soul searching, he decides to eliminate her as quickly and efficiently as possible.

Bud concocts an elaborate scheme to make Dorothy's death look like a suicide, but a couple of obstacles threaten its success. When he at last accomplishes the deed, he thinks he's home free. (He always made Dorothy promise to keep their relationship a secret, so no one suspects him.) Yet Dorothy's sister Ellen (Virginia Leith) can't come to terms with Dorothy's tragic fate, and after discovering a few intriguing clues, she enlists a police intern (Jeffrey Hunter) to help her investigate what she believes to be a murder.

Levin was known for sprinkling jaw-dropping revelations and ingenious twists into his novels and plays, and 'A Kiss Before Dying,' though a bit predictable by today's seen-it-all standards, contains its fair share. Bud's culpability, however, is never in doubt, and it's morbidly fascinating to watch this attractive, beguiling killer ply his trade, usually with an ingratiating smile on his face. Few movie villains up to that time were so suave and romantic, yet also cold and calculating, and Wagner deliciously plays against type, astutely tarnishing his wholesome, pretty-boy image and embracing unvarnished evil. Though Wagner is best remembered for his television work in 'It Takes a Thief' and 'Hart to Hart,' 'A Kiss Before Dying' offered him arguably his finest movie role, and like the slick character he portrays, he glides through the film with deceptive ease.

In its initial stages, 'A Kiss Before Dying' seems to blatantly mimick George Stevens' 'A Place in the Sun,' in which a conflicted social-climber (Montgomery Clift) considers bumping off his pregnant girlfriend (Shelley Winters) so he can continue wooing a drop-dead gorgeous debutante (Elizabeth Taylor). Director Gerd Oswald is no Stevens, but in his first feature film he builds tension well, supplies a few notable jolts, and never sugarcoats the grisly storyline. Gore is absent (an effective choice), but the shock quotient is fairly high for a film of that period. And though 'A Kiss Before Dying' predates 'Psycho' by four years, it's tough not to think of the Hitchcock horror classic during the movie's second half when Dorothy's sister Ellen - shades of Marion's sister Lila in 'Psycho' - teams up with a hunky hero to try and solve the crime.

And much like Janet Leigh's Marion, Joanne Woodward's doomed Dorothy is a far more interesting character than her rather stiff sibling. Surprisingly, Woodward would later refer to 'A Kiss Before Dying' as her "worst picture," but the young actress - a year before earning an Oscar for 'The Three Faces of Eve' - makes a significant impression despite an unflattering hairdo that brings to mind Hayley Mills in 'The Parent Trap.' As Ellen, Leith is attractive but bland (it's no wonder her film career never took off) and she creates little chemistry with Hunter (best known for his starring role opposite John Wayne in 'The Searchers,' released the same year), who dons horn-rimmed glasses and often resembles Clark Kent from 'Superman.' It's a thankless, somewhat boring part, yet Hunter does what he can with it.

Far better than the absurd 1991 remake with Matt Dillon and Sean Young, the original version of 'A Kiss Before Dying' occasionally strains credulity, but remains a well-constructed, engrossing thriller. The location shooting in Tucson, Arizona lends the film an edgy authenticity that heightens suspense, while the lush color photography of Lucien Ballard ('True Grit') nicely counters the plot's noirish accents. Though it can't compete with more renowned genre entries, 'A Kiss Before Dying' is a nifty little excursion into the dark side of the human psyche that still has the power to shock and appall its audience. 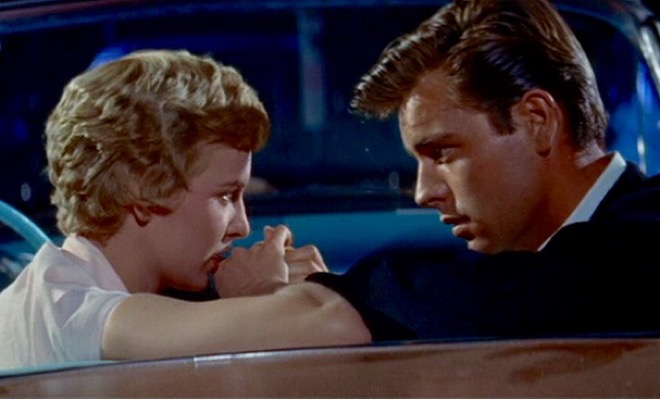 The 1956 version of 'A Kiss Before Dying' arrives on Blu-ray packaged in a standard case. Video codec is 1080p/AVC MPEG-4 and audio is DTS-HD Master Audio 2.0 mono. Once the disc is inserted into the player, the static menu with music immediately pops up; no previews or promos precede it.

'A Kiss Before Dying' is a rare example of Technicolor noir (okay, the film was actually shot in single-strip color by DeLuxe, but you get the idea). It should look lush and sumptuous, but unfortunately a ragged source print riddled with flaws saps the picture's luster and sabotages Kino Lorber's 1080p/AVC MPEG-4 transfer. At first glance, the image appears vibrant and well modulated, but it quickly degenerates as a veritable kitchen sink of problems rises to the forefront. A flurry of nicks, specks, and occasional blotches assault the picture, and at one point a couple of reel change markers rear their ugly head. A few missing frames around the 1:26:00 mark are quite jarring, and the color timing consistently misses its mark. Hues tend to bleed and stray in various parts of the image where some fading has set in, and bluish tinting sporadically dyes portions of the picture, undulating in and out with annoying regularity. Blue splotches even pop up in the actors' hair. Primaries are strong, however, and deep blacks lend the transfer some welcome weight and stability. A couple of sequences exhibit heavier than normal grain, but otherwise the levels remain within acceptable boundaries and help render a film-like feel. Contrast is slightly muted (another symptom of print fading), but close-ups are sharp enough, patterns are rock solid, and background details are relatively easy to discern.

Kino Lorber has given us some terrific classic transfers of late, but sadly 'A Kiss Before Dying' can't be added to the list. Only a full-scale restoration could solve all of the issues afflicting this very disappointing transfer that calls far too much (negative) attention to itself and consistently takes us out of the movie.

Unfortunately, the audio is on a par with the video. The film boasts a Lionel Newman score that's arranged by industry giants Billy May and Nelson Riddle, but the DTS-HD Master Audio 2.0 mono track never does the music justice. Right from the start, the sound exudes a hollow flatness that doesn't improve even with volume adjustments, and weak fidelity prevents the audio from filling the room. Quite noticeable surface noise afflicts a few portions of the track, as does some prominent hiss, and dialogue can be a bit muddled and difficult to understand. A wide dynamic scale handles all the highs and lows with ease, but the tones lack vitality and depth. Though several prime audio opportunities lace the film's soundtrack, most fall short of expectations, and for a thriller, that's a real shame.

The only supplement is the film's original theatrical trailer, which runs a scant two minutes and ominously promises "Robert Wagner will startle you, shock you in this terrifying role!"

As slick as Robert Wagner's good looks, 'A Kiss Before Dying' is a well-oiled thriller that's plausible enough to be ripped from today's headlines. A few surprises, taut direction, and some winning performances distinguish this dark tale of a devious social climber who won't let anything - or anyone - keep him from achieving the wealth and stature he so dementedly craves. Unfortunately, Kino Lorber's Blu-ray presentation doesn't match the film's quality, as subpar video and audio transfers and a dearth of supplements diminish the appeal of this release. Gerd Oswald's film remains a notable noir thriller that's definitely worth a look, but the disc quality should make even diehard fans think twice about a purchase.

Sale Price 11.63
List Price 29.95
Buy Now
3rd Party 12.13
In Stock.
See what people are saying about this story or others
See Comments in Forum
Previous Next
Pre-Orders
Tomorrow's latest releases