An Irish rogue plants a stolen crock of leprechaun gold in the soil near Fort Knox to reap what he thinks will be a rich harvest. In tow are his spirited daughter, a lovestruck leprechaun and a bigoted Southern senator transformed by misbegotten magic.

Once upon a time, Francis Ford Coppola directed a musical. Yes, a musical. (And no, it wasn't Bugsy Malone.) In the summer of his 29th year, the young Coppola cut his cinematic teeth on the classic -- and somewhat controversial -- Finian's Rainbow, one of Broadway's most successful and endearing shows. The tuneful story of an Irish drifter, a stolen pot of gold, and an irrepressible leprechaun might seem anathema to a man who would later become synonymous with bloody Mafia epics, but studio chief Jack Warner made Coppola an offer he couldn't refuse -- the chance to direct a major motion picture starring Fred Astaire. And though no one will ever utter Coppola's name in the same breath as such musical geniuses as Vincente Minnelli and Busby Berkeley, Finian's Rainbow does the director proud, and despite a spotty reputation, remains one of the more engaging and least bombastic musicals of the late-1960s.

With his "borrowed" tub of ore and comely daughter Sharon (Petula Clark) in tow, Finian McLonergan (Astaire) leaves his Irish homeland and arrives in Rainbow Valley, Missitucky with one purpose in mind -- bury the gold and hope it will grow in value, just like the bullion entombed at nearby Fort Knox. Finian, however, doesn't expect Og the Leprechaun (Tommy Steele) to show up in search of his treasure, nor does he count on Sharon falling in love with rugged sharecropper Woody Mahoney (Don Francks). Bigoted senator Billboard Rawkins (Keenan Wynn) further complicates matters by attempting to seize the sharecroppers' land because he abhors their integrated culture. A magical plot twist turns everyone's world upside down, but all is happily resolved in time for the finale -- a contemplative reprise of the beautiful "How Are Things in Glocca Morra?".

It seems amazing today, but for many years Hollywood considered Finian's Rainbow (which premiered on Broadway in 1947) too hot for mass consumption. Although the tale seems innocuous enough on the surface, a number of potent themes percolate underneath. The musical tackles racism, alludes to the Communist witch hunt, and liberally sprinkles economic satire throughout. Yet by 1968, such issues had lost their edge, and though Coppola tries to inject some topicality into the story by tying it to the Civil Rights Movement -- and achieves a degree of success — he can't completely eradicate the show's dated aspects.

Of course, much of the film's appeal must be attributed to Burton Lane and E.Y. Harburg, who supply one of the most memorable and melodious scores ever to adorn the stage or screen. Even Coppola at his most clumsy can't tarnish such gems as "Look to the Rainbow," the aforementioned "Glocca Morra," "Old Devil Moon," "If This Isn't Love," and "When I'm Not Near the Girl I Love (I Love the Girl I'm Near)." Clark handles most of the vocals and utterly beguiles in her American film debut, bringing warmth, spunk, and an earthy sensuality to her role. She works well with Astaire, who, in his final musical role, trades his top hat, white tie, and tails for scraggly secondhand duds. Astaire's grizzled appearance belies a youthful vitality rarely seen in 40-year-olds, let alone someone pushing 70, and although his steps lack complexity, his dances still exude style, grace, and exuberance.

Finian's Rainbow received only a lukewarm box office reception, but the film has aged well and may actually play better today than it did upon its initial release. The picture's contemporary style, distinguished by fluid camera work and fragmented, non-linear musical numbers, doesn't seem as jarring or sacrilegious as it must have in 1968, when it turned off critics expecting a more traditional musical movie. Although bucking established trends was almost de rigueur in 1960s Hollywood, anyone who monkeyed with musicals risked vilification, and Coppola, by his own admission, may have been overly obsessed with modernizing the form. Still, he deserves credit for trying to breathe new life into an old-fashioned genre.

He errs, however, by treating his subject with too much respect. At 145 minutes (and including an intermission), Finian's Rainbow is far too long, with many lengthy dialogue scenes stalling the story and depleting the film's energy. A superfluous subplot (written expressly for the movie) packs on additional heft, but Astaire, Clark, Francks, and Steele perform with enough vigor to keep us entertained and involved most of the time. Faults aside, the film provides a sneak peek at the creative force Coppola would soon become, and lays the groundwork for his second and final foray into musicals - One from the Heart - a dozen years later.

Finian's Rainbow may not be the pot of gold at the end of the musical rainbow, but it's a delightful and surprisingly substantive show, and allows us one final chance to cherish the ageless charm, agility, and elegance of Fred Astaire. Young or old, dapper or scruffy, there's no one like him. 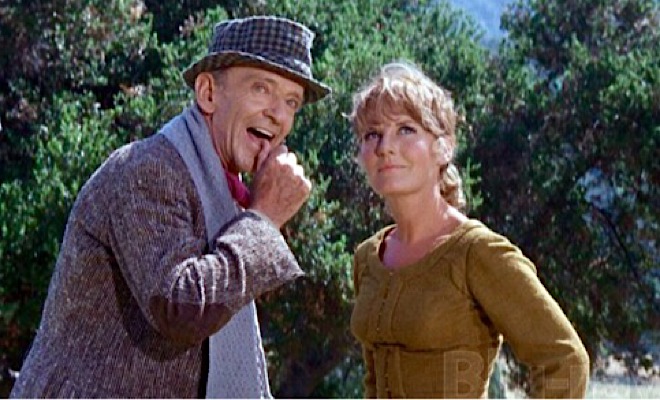 Finian's Rainbow arrives on Blu-ray packaged in a standard case. Video codec is 1080p/AVC MPEG-4 and audio is DTS-HD Master Audio 5.1. Once the disc is inserted into the player, the static menu with music immediately pops up; no previews or promos precede it.

Like a bowl of Lucky Charms, the Finian's Rainbow 1080p/AVC MPEG-4 transfer from Warner Archive is "magically delicious." The 2005 DVD sports a strong image, but this razor sharp rendering at times looks almost three-dimensional and consistently pops with vibrant hues and lush saturation. (Red accents like Astaire's long-johns instantly grab attention.) Such superb clarity makes some of the soundstage sequences appear artificial, but that's okay in a film that features a leprechaun as a main character. Thankfully, much of the action transpires outdoors, and those scenes benefit from excellent contrast and an expansive feel that almost make us forget they were filmed on the Warner back lot. Black levels are rich and deep, excellent shadow delineation keeps crush at bay, and just a hint of grain preserves the film-like feel (although some isolated shots exude noticeable softness). Flesh tones remain stable and natural throughout, patterns are rock solid, and only a stray white fleck here and there mars this wonderful presentation. Fans of the film will be thrilled by another meticulous Warner transfer, and it's impossible to imagine Finian's Rainbow looking more fresh and lively.

The newly remastered DTS-HD Master Audio 5.1 track sounds bright and crisp, and although details don't envelop like we hope they will, ambient effects play nicely across the front speakers. Subtleties like chirping birds, clucking chickens, and footsteps are marvelously distinct, and strong bass frequencies add wonderful resonance to the mix. Dialogue and song lyrics are clear and always easy to understand, and excellent fidelity enhances the musical numbers. For orchestral enthusiasts, Warner also includes the movie's original overture, entr'acte, and exit music, which allows us to further appreciate the lilting beauty of Burton Lane's score. A wide dynamic scale handles all the highs and lows without a hint of distortion, and no age-related hiss, pops, or crackles intrude. Musicals demand top-notch audio, and this vital track hits all the necessary marks.

Introduction and Commentary by the Director - It's always a treat to listen to a filmmaker of Coppola's stature, and the director's honesty and insights add welcome perspective to the picture. This interesting and informative track begins with a four-minute featurette, in which Coppola sings the verse of "Look to the Rainbow" on camera before introducing the film. Rare photos and behind-the-scenes snippets enhance this brief piece, which smoothly segues into the overture and Coppola's feature-length remarks. Often self-critical, the director frankly addresses his mistakes and rues his inexperience, yet still remembers the production — and especially working with Astaire and Clark — with great fondness and nostalgia. He recalls how the studio denied his requests to shoot on location, so he filmed the entire movie on the Warner back lot and on recycled Camelot sets. He talks at length about his family's background in musicals, and how he decided to direct Finian's Rainbow — against his better judgment — "to impress my father and win my credentials in his eyes." He admits he never read the script before accepting the assignment, and found the original book "clunky" and "very dated." As a result, he sought to make the musical more contemporary by grafting the sensibilities of the late-1960s and the Civil Rights Movement onto the show. Coppola candidly (if sheepishly) discusses his disagreements with and ultimate firing of Astaire's long-time choreographer Hermes Pan, and points out how — much to his embarrassment — he occasionally allowed Astaire's legendary feet to dance out of the frame. He tells an amusing story about Jack Warner, confesses he didn't get along with Don Francks, and notes Astaire's disappointment when his former dancing partner, Barrie Chase, was not chosen to portray Susan the Silent. He also remembers when a young nobody named George Lucas visited the set, and how the two became friends and colleagues. The track drags in spots and becomes a little repetitive, but considering it runs almost two-and-a-half-hours, it's easy to forgive any lapses. For fans of Finian's Rainbow, Coppola's commentary is a must, but general film enthusiasts will find much of interest as well.

Vintage TV Special: "The World Premiere of Finian's Rainbow" (SD, 25 minutes) -  Taped prior to the movie's inaugural showing at a New York City theater, this vintage program mixes film clips and some brief behind-the-scenes footage with "red-carpet" interviews with the musical's stars. Fred Astaire, Tommy Steele, Don Francks, Al Freeman, Jr., and Barbara Hancock all chat with host Lee Phillip, while Petula Clark appears on tape from Geneva, Switzerland. The event exudes a modicum of glamour, but despite striving to create an impression to the contrary, it can't compete with the gala Hollywood premieres of yore. Still, it's fun to get up-close-and-personal with the performers (especially Astaire), and see a pre-Godfather Coppola amiably answering questions about the film, his directorial style, and how he became interested in the medium.

One of Hollywood's last memorable musicals, Finian's Rainbow is packed with Irish charm, American spirit, and some of the best songs Broadway ever produced. Astaire, Clark, and Steele energize the whimsical tale, and Coppola's assured and, at times, inventive direction heightens the film's magical feel. To top it all off, Warner Archive supplies a first-rate video transfer, excellent audio, and a couple of solid extras, making this tuneful romp easily recommended.

Sale Price 17.99
Buy Now
3rd Party 12.26
In Stock.
See what people are saying about this story or others
See Comments in Forum
Previous Next
Pre-Orders
Tomorrow's latest releases