The Last Temptation of Christ

Overview - The Last Temptation of Christ, by Martin Scorsese, is a towering achievement. Though it initially engendered enormous controversy, the film can now be viewed as the remarkable, profoundly personal work of faith that it is. This fifteen-year labor of love, an adaptation of Nikos Kazantzakis’s landmark novel that imagines an alternate fate for Jesus Christ, features outstanding performances by Willem Dafoe, Barbara Hershey, Harvey Keitel, Harry Dean Stanton, and David Bowie; bold cinematography by the great Michael Ballhaus; and a transcendent score by Peter Gabriel.
OVERALL
Recommended 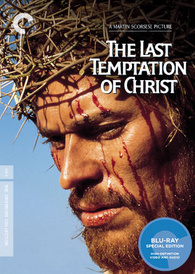 It's a shame Martin Scorsese's 'The Last Temptation of Christ' is most often mentioned for the turbulent firestorm it generated at the time of its release rather than the philosophical and spiritual beauty it's actually meant to portray. Thanks to some furious, adamant critics around the world, the film became a box-office disappointment, was banned in many parts of the U.S. (including the Blockbuster rental chain), and is now notably remembered for its seemingly controversial subject matter. Most recently, Willem Dafoe, who stars as Jesus Christ, made a guest appearance on The Colbert Report where the pseudo-right-wing comedic host made a crack about the actor still not being forgiven for his involvement in the religious drama.

All the hullabaloo is over the portrayal of Jesus, which actually doesn't contradict or dispute His importance as the founder one of the world's widely-accepted religions or his divinity. In fact, much of what is seen on screen and the miracles believed to have been performed are as described in the gospels. With Michael Ballhaus behind the camera, Scorsese admittedly depicts these moments in Jesus' life with a good deal of creative license, such as when He restores a blind man's sight or raises Lazarus (Tomas Arana) from the dead. His meeting John the Baptist (Andre Gregory) for the first time and tearing out His heart after some time in the desert are two particularly impressive and beautiful scenes. None are meant to insult viewers in any way and in effect, appear to reaffirm one's belief.

Based on the equally-controversial novel of the same name by Nikos Kazantzakis, Paul Shrader's ('Rolling Thunder,' 'Taxi Driver,' 'Raging Bull') script simply asks audiences to imagine Jesus as a regular mortal man and not only as the holy, celestial icon He is cherished for. This is not to question or challenge His divine nature. Rather, it makes possible a deeply honest and sincere discussion about His unique role in human history and his relationship with others and the society of the period. This fictional version of arguably the most influential person of all time does stray, of course, from gospel accounts in several respects, though without offense. Most striking is having the story of His philosophical teachings and His crucifixion told from the point of view of Jesus Himself.


In doing this, the filmmakers not only allow Him an individual voice for the first time, but further humanize the man commonly acknowledged as the one true Messiah. The overall theme is that Jesus, as God's only begotten Son, was also made of human flesh and if meant to serve as "the propitiation for our sins," why shouldn't He know what those sins are? As shown by Dafoe and through Scorsese's inspirational vision, Jesus Christ is made more relatable to modern audiences because we're made to imagine him as a real man. His struggle to accept His calling is more compelling, and Judas's (Harvey Keitel) betrayal is more tragic. His relationship with Mary Magdalene (Barbara Hershey) is also a bit more heartfelt because the story expands on it. Moreover, Jesus grappling with the temptations of the body makes His ultimate sacrifice that more effective. It has a greater dramatic impact because we understand Him as a man.

Born into a devout Catholic family, Martin Scorsese hasd always wanted to make a film adaptation of Jesus' life and teachings. After reading Kazantzakis's novel, which Hershey personally lent to him, he thought he'd found the opportunity to do just that from a unique and interesting perspective. Audiences did not openly welcome this fictional view with open arms, and many still refuse to even watch. Somehow, the thought of imagining Him as a man and made of flesh, which He undoubtedly was, is continually perceived as blasphemous, despite the fact the lessons learned from those gospels remain intact, if not more impactful and uplifting. 'The Last Temptation of Christ' is a wonderful telling on the life of Jesus and is a marvelous film from Scorsese, one which even this non-believer views as brilliantly moving and inspiring.

This Blu-ray edition of 'The Last Temptation of Christ' comes courtesy of The Criterion Collection (spine #70) on a Region A locked, BD50 disc and housed in the distributor's standard clear keepcase. Accompanying the disc is a foldout pamphlet and an insightful essay entitled "Passion Project" by culture critic David Ehrenstein. There are no trailers or promos before being greeted by the distributor's normal menu options.

According to the accompanying pamphlet, the 1080p/AVC MPEG-4 encode was struck from a 35mm interpositive with the supervision and approval of cinematographer Michael Ballhaus and editor Thelma Shoonmaker. The results, I must say, are pretty fantastic with several astounding moments scattered about.

Although it may not compare to other releases from the same period or earlier, the picture is likely accurate to its original showing and comes with a nice, thin layer of grain, providing an appreciable film-like quality. Presented in its original 1.85:1 aspect ratio, Ballhaus's photography has a weathered, gritty texture to it, making life in the desert seem that more arduous and unpleasant. Much of the palette is focused on secondary hues with lots of browns and yellows throughout. The few times of bold, vivid primaries on display remind us we're watching a high-def video. Skin tones have a slight red-push, which can be off-putting but not terribly distracting. Overall definition and clarity is excellent, revealing plenty of texture in the faces of actors and distinct fine lines around clothing, architecture and the desert sand.

If there are any complaints about the picture, they're rather minor and negligible, mostly due to preferences. Contrast is a tad dull and flat although it does nothing to ruin the image in anyway and whites are brilliantly clean. Black levels are deep and true, offering a bit of depth in some places, but shadow details are terribly wanting in many scenes with some visible crush in the background. Still, all things considered, the transfer is quite lovably and the best video presentation of Scorsese's religious drama we've seen yet.

Like the video, the often-beautiful sounds of 'The Last Temptation of Christ' make a terrific transition to high-resolution audio, and it was supervised by Academy Award-winning sound designer and editor Skip Lievsay.

Taken from the original six-track magnetic masters, the DTS-HD Master Audio soundtrack is a remarkable improvement to previous releases, feeling much more spacious and broad than before. The front soundstage displays a great deal of warmth with excellent channel separation and a wide image with impressive though very mild off-screen effects. Dialogue is well-prioritized and very precise, showing noteworthy movement across the screen with clear tonal inflections during very passionate conversations between characters. Rear activity is somewhat minimally used, reserved for a few scattered atmospherics intended for ambience. It's very convincing, but satisfying nonetheless.

The clear winner in this lossless mix, however, is Peter Gabriel's award-winning musical score, spreading across the soundstage and lightly bleeding into the rear with satisfying effect. Dynamic range may not be pushed very far into the upper regions, but there's plenty of rich, detailed clarity from the Middle-Eastern singing and within the hauntingly subtle instrumentation. The low-end, too, is quite faint but noticeably present nonetheless to provide some depth and power to the score. It's a marvelous upgrade to a soundtrack which popularized world music.


Very likely due to the adamant backlash received, some of which was violent in certain parts of the world, 'The Last Temptation of Christ' failed at the box-office, despite several positive reviews and favorable word-of-mouth. Martin Scorsese's marvelous adaptation of Jesus' life remains a highly-controversial telling, but should be appreciated for making His teachings and ultimate sacrifice more powerful due to its unique approach of remembering that He was a man. The Blu-ray from The Criterion Collection arrives with a excellent picture quality and a terrific audio presentation. Although it features a somewhat disappointingly small set of supplements, the overall package is recommended for fans.

Sale Price 24.49
Buy Now
3rd Party 19.98
In Stock.
See what people are saying about this story or others
See Comments in Forum
Previous Next
Pre-Orders
Tomorrow's latest releases