The concluding chapter of Michelangelo Antonioni’s informal trilogy on contemporary malaise (following 'L’avventura' and 'La notte'), 'L’eclisse' ('The Eclipse') tells the story of a young woman (Monica Vitti) who leaves one lover (Francisco Rabal) and drifts into a relationship with another (Alain Delon). Using the architecture of Rome as a backdrop for the doomed affair, Antonioni achieves the apotheosis of his style in this return to the theme that preoccupied him the most: the difficulty of connection in an alienating modern world.

'L'eclisse,' the third film in Michelangelo Antonioni's unofficial trilogy on the disconnectedness of the modern world, wastes little time in developing a disquieting tonal sentiment or notion that something quite ominous looms on the horizon. Before the film even begins, sharp, portentous piano chords establish a sense of doom and foreboding, abruptly undoing the bright, jazzy, and almost whimsical music that first accompanies the credits. That uneasy attitude is immediately capitalized upon in the opening scene, in which Anotonioni depicts a relationship coming to an end, after what, it is later established, has been a very long night between now former lovers Vittoria (Monica Vitti) and Ricardo (Francisco Rabal). In effect, the film begins at an ending, which, in turn, ends at the beginning of a new day.

The scene is languorous almost to the point of confusion. Vitti and Rabal stare off into space, as though they're unsure where they are. But it is Vitti, in particular, who exudes a compelling and yet strange detachment throughout the encounter, first by reaching through a picture frame to touch objects she seems unfamiliar with, only to appear quite surprised to find they are real. Soon, the two acknowledge one another and their circumstances are made clearer, though the details remain opaque, as though Antonioni is intent on keeping the audience at the same arm's length (or greater) as the Vittoria keeps Ricardo. It is a challenging opening, one that revels in a need to obscure a narrative, almost to the point of being contemptuous at the thought of needing one at all. And yet, for those who have already seen 'L'avventura' and 'La notte,' that particular sentiment will feel rather familiar: The ambiguity of the scene is tantamount to the indistinctness the characters convey in their reactions to and interactions with the world around them.

And that same ambiguity and indistinctness remains with regard to the rest of the film, hanging like a low cloud over the story that gradually develops around questions of what Vitti's character is looking for – which she keeps hidden behind a wonderfully inexpressive visage – even as the already slight narrative shifts (again, familiarly) focus to explore what drives the fast-living stockbroker Piero (Alain Delon), as he develops feelings for Vittoria, and she, seemingly, for him. And yet, as the film presses on, the feeling that something is wrong, that these two are pressing towards a hopeless relationship becomes more and more palpable, and the ennui that seemed to wrack Vittoria manifests into something far more pressing than mere tedium. 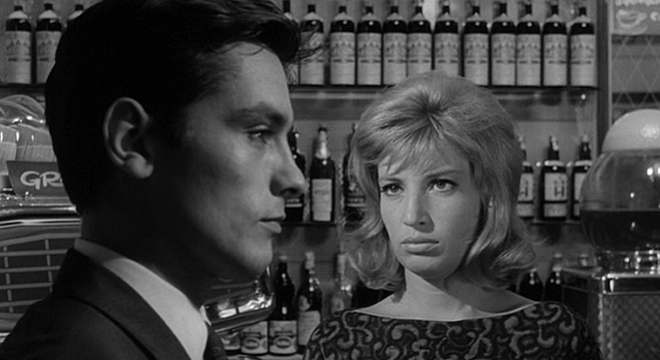 Both Vitti and Delon are fantastic in their roles; their youth combined with their impossible beauty, especially, when on-screen together, feels like nothing short of an extraordinary special effect. The precise milieu of Rome, and its architectural mixture of the ancient and the (then) modern, which Antonioni uses to paint Delon and his frequent muse in a gradually less amusing and wondrous light, simultaneously accentuates and dissolves the effect of physical beauty, as an increasingly pervasive sense of alienation creeps in. That estrangement is underlined in the film's dreamlike quality that is expressed in its abrupt shifts in setting, tone, and even perspective. Entire characters disappear and are seemingly forgotten altogether, while others, like Piero and, in more than one instance, Vittoria herself, are prone to making sudden appearances, usually standing in close proximity to the focalized character of the moment, or placed in some slightly unnatural state, like the middle of a strangely desolate street while a horse-drawn cart jaunts down the road. But although it seems as if things could easily delve into the realm of the absurd, Antonioni stops well short of surrealism, imbuing 'L'eclisse' with a sense of realism that gives the plight of its protagonists and their ill-fated love a far more affecting sense of impending misfortune.

Vittoria spends her days placidly watching others. In one instance, it is her mother at the stock exchange, where people have gathered to gamble in and amongst the minor players of the Italian financial system. Later, she follows a heavyset man after the market experiences a small crash in an attempt to understand – or, more likely, to feel – how he can remain so calm after losing a substantial sum of money. A vague impression of suicide hangs over the moment, furthering the idea of people and their emotions being commodified and easily traded in an increasingly impersonal, futures-driven society wherein the alienation of the working-class is as potent as the disaffection of those amongst the wealthy elite.

Throughout the film, Antonioni expresses separation between all things both visually and metaphorically – which began during the film's opening scene. Later, at their first meeting in the stock exchange, Vittoria and Piero are seen separated by a large stone column in a truly magnificent shot that could easily substitute for a written synopsis of 'L'eclisse.' But, more impressively, is how Antonioni disregards larger narrative or character arcs by concentrating on short, often deliberately truncated moments in time that gradually make up the entire film as a series of occurrences, rather than one long, overarching storyline. This approach allows for moments like the rather unpleasant instance in which Vittoria dresses in blackface and does a vaudeville-like rendition of an African dance. Watched today, the scene is racist and certainly off-putting, but there is an underlying sense that, instead of simply being an act of outright bigotry, the moment is fueled by Vittoria's uncertainty and the indistinctness that defines her, and as such, is literally trying on a completely different life to see whether or not it suits her. It does not excuse the act itself but it at least gives the impression – somewhat ambiguously – there was something more behind it than mere prejudice.

Such ambiguity, or, more likely, deliberate inscrutability, not only gives the movie its unique tone, but also its entire essence. For a film about the seeming impenetrability of human connection in the modern world, 'L'eclisse' itself is also enigmatically and fascinatingly impenetrable at times. 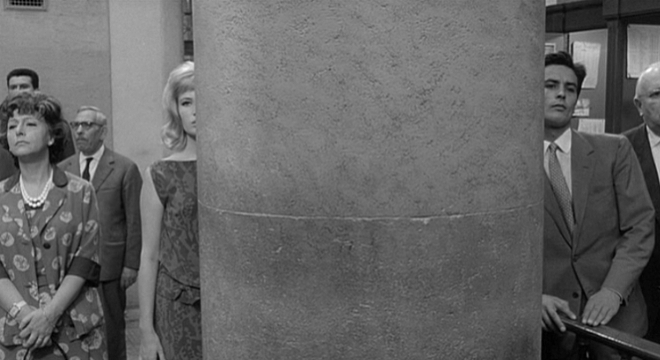 'L'eclisse' comes from Criterion as a 50GB Blu-ray disc + two-disc DVD set in the standard clear, oversized keepcase with spine no. 278. All the special features are contained on both formats, while a booklet featuring essays from Jonathan Rosenbaum and Gilberto Perez, along with portions of Antonioni's own writing about his filmography is also included.

'L'eclisse' has been given a new high-definition digital restoration, resulting in a truly impressive image that is likely as good as this film has ever looked. The stunning black-and-white cinematography of Gianni di Venanzo is on full display here, and is now accompanied by some incredibly high levels of fine detail, the ready appearance of texture in clothing and, more often, building structures and the hard, stone-like materials they are comprised of. Grain has been reduced dramatically, yet there is still a slight presence that lends a pleasant filmic quality to the overall presentation. Contrast is high throughout, resulting in rich, dramatic, black levels that enhance the nighttime sequences very well, while daytime scenes remain bright and detailed. Shadow delineation is very high, and the image is completely free from issues with crush or banding of any kind.

There are a few spots in the image where focus appears to go a little soft, but those are few and easily forgotten. Similarly are the moments when the image is marred by black vertical lines that simply could not be removed. As is usually the case, the picture around them is so strong that the appearance of the lines actually serves to play up the film's age and they become something of a quaint reminder how good the rest of the movie actually looks.

Overall, this is a gorgeous looking transfer that does justice to an equally beautiful film.

The linear PCM mono track is surprisingly deep and dynamic, offering rich dialogue and plenty of atmospheric elements that one might not expect from a monaural track. First and foremost, voices are generally clear and distinct, though there are a few moments in the beginning when dialogue seems to be a touch soft; otherwise everything comes out strong. There is little score to listen to, but what music there is sounds strong and works well with the actors and actions on-screen. Atmosphere is possibly the most impressive aspect of the audio, however. Here, during the tumultuous stock market scenes, the monaural track manages to create a sense of depth and immersion that is very impressive. Addiitonally, the track has been given a thorough cleaning, resulting in a presentation that is free from clicks, scratches, or hissing that might otherwise mar an older audio track such as this.

In the end, the audio here does quite a lot with very little, giving an older film an unexpected amount of depth and richness to its sound.

Audio Commentary with Richard Peña - Recorded in 2004, Peña is the former program director at the film Society of Lincoln Center in New York and a professor at Columbia University. Here, he gives an informed, scholarly look at the film, its use of imagery, and the history of Antonioni's work, as it pertains to how it was initially received as opposed to how it is regarded now.

Michelangelo Antonioni: The Eye that Changed Cinema (HD, 56 min.) – A sweeping documentary produced in 2001 that not only yields some incredibly interesting aspects of Antonioni's life, but also delves into minute detail about his films and the messages behind many of them.

Elements of Landscape (HD, 22 min.) – Produced in 2005, this features Italian film critic Adriano Aprà and Carlo di Carlo – a longtime friend of Antonioni's – as they discuss the filmmaker and, specifically his work on 'L'eclisse.

'L'eclisse' is very much a product of its time. It depicts the anxiety surrounding the notion that the modern world was beginning to feel more and more intrusive and obstructive in terms of how individuals dealt with things like interpersonal relationships and community, and their connection to both. There is a general malaise hanging over many of Antonioni's finer works, and it is utterly palpable here. Both Vitti and Delon are fantastic and although there are moments that can be cringe inducing, they at least reach to find something significant from that unpleasantness. With a great image, very good sound, and informative extras, this one definitely comes recommended.

Sale Price 39.95
Buy Now
3rd Party 29.95
In Stock.
See what people are saying about this story or others
See Comments in Forum
Previous Next
Pre-Orders
Tomorrow's latest releases