December 1944. A civilian victim of the Battle of Bastogne scrounges through garbage to find a scrap of food. "I don't even see those things," a war-numbed GI says. "I want to remember them!" his buddy snaps. Bastogne veteran Robert Pirosh remembers with his Oscar(r)-winning* screenplay for Battleground, a gripping tale of 101st Airborne troops resisting Hitler's fierce, final counter-offensive. Directed by William A. Wellman (The Story of GI Joe), the superb cast includes James Whitmore as a bantam rooster of a Sergeant, and Van Johnson as a wisecracking PFC (as in "Praying for Civilian"). Rugged and unsparing, Battleground - nominated for six Academy Awards(r) including Best Picture - makes sure we all remember.

When producer Dore Schary came to MGM in the late 1940s, he locked horns with chief executive Louis B. Mayer over the studio's future direction. Glossy musicals, light comedies, and heartwarming family films had been MGM's bread and butter for two decades, but Schary, taking his cue from jaded post-World War II audiences who craved more realistic, relatable stories, sought to put a grittier spin on the studio's output. 'Battleground' was one of his pet projects, and this intimate, stark portrait of the Battle of the Bulge - one of the key Allied standoffs in the latter stages of WWII - helped change the face of war movies.

Director William A. Wellman ('The Public Enemy,' 'The Ox-Bow Incident') subtly yet pointedly shifts the spotlight away from propaganda and shines it on a small battalion of cold, hungry, fatigued, yet doggedly determined soldiers, and through their weary eyes he presents a more cynical view of army life and less sympathetic portrait of the brutal fighting on the field. At the time, the no-frills, no-nonsense approach provided a fresh perspective on the men who fought and died for their country. Viewers appreciated the frankness and made 'Battleground' MGM's most popular picture of 1949 and highest grossing film in five years. The movie would also earn Academy Award nominations for Best Picture, Director, Supporting Actor (James Whitmore), and Film Editing, and would win Oscars for its screenplay and cinematography.

Known as the 'Battered Bastards of Bastogne," the members of the 101st Airborne Division found themselves surrounded by Nazi forces in the quaint Belgian village just before Christmas in 1944. Cut off from the Allied supply train and socked in by dense, unrelenting fog, which prevented liberating air strikes, the soldiers hunkered down for several interminable days while impatiently waiting for the weather to break. During that time, German officials asked the division to surrender, to which Brigadier General Anthony McAuliffe famously and defiantly replied, "Nuts!" (The incident is amusingly dramatized in the film.) With rations dwindling and temperatures plunging, the beleaguered men fought on, valiantly battling to hold their position and beat back a tenacious, ever-encroaching enemy.

Though its title promises large-scale war scenes and non-stop action, the scope of 'Battleground' is limited as it examines this historic conflict from the inside out. Sure, there are siege sequences, but they're shot in a confined space, so we can viscerally experience all the chaos, confusion, fear, and agony. The violence may not be as graphic as the uncompromising depictions in 'Saving Private Ryan' and 'Hacksaw Ridge,' but it's equally shocking and impactful. We get the "war is hell" message loud and clear - maybe even louder and clearer, because of the film's unwavering human focus.

One by one, we're introduced to almost all of the "Screaming Eagles," the nickname of the 101st Airborne, and the diverse, down-to-earth comrades-in-arms rib and needle each other like brothers. The characters may lack depth, but they're well defined, and through them we experience the drudgery and boredom of army life, as they dig foxholes, hand out rations and mail, shoot the breeze, play baseball with snowballs, and rejoice over a hot cup of joe and fresh grub. Yet as the film progresses and a sense of urgency clouds the air, frayed nerves, debilitating dread, and mounting frustration with arbitrary orders and a tangled bureaucracy rise to the surface. With refreshing abandon, the soldiers bitch about the food, complain about their duties, share their considerable fear, and express their eagerness to get out of the military for good. Though patriotic, almost all of them would rather be at home in a warm bed or in the arms of their girlfriends or wives than fighting for their country and facing what seems like certain death. That's quite a shift from the selfless, rah-rah heroics that permeate the propaganda films of just a few years before, and a big reason why 'Battleground' doesn't seem as dated as other movies of the period.

Robert Pirosh's screenplay is a tour de force that juggles a dozen or more characters, seamlessly blends action and emotion, features both snappy and sincere dialogue, and remains largely true to history. Such finesse is difficult and rare, and Wellman packages it all with his customary bravado, maintaining a macho tone without shying away from sensitive, revealing moments. Never maudlin or sappy, the film treats war and the casualties that stem from it in a matter-of-fact manner, allowing the images to speak for themselves. Forgoing music, except to bookend the movie, is an especially effective choice. The lack of a soundtrack allows us to become more fully immersed in the life-and-death situations the men face and absorb their triumphs and tragedies the same way they do.

A top-notch ensemble cast, led by Van Johnson, John Hodiak, Ricardo Montalban, and George Murphy, brings the tale to life, but some of the best work is contributed by lesser known actors. James Whitmore, as the tobacco-chewing and spewing platoon leader, files an especially colorful portrayal, and Leon Ames, perhaps best known as the put-upon patriarch in 'Meet Me in St. Louis,' makes the most of his limited screen time as an Army pastor. Marshall Thompson, Don Taylor (who would play Elizabeth Taylor's husband-to-be the following year in 'Father of the Bride'), James Arness, former child star Scotty Beckett, and Guy Anderson (who would later gain fame as the dad in the 'Dennis the Menace' TV series) also serve the story well. Eagle eyes will spot Tommy Noonan (Marilyn Monroe's nerdy millionaire beau in 'Gentlemen Prefer Blondes' and Judy Garland's piano-playing pal in 'A Star Is Born') in an unbilled bit.

Though its promotional campaign tried to downplay the film's seriousness ("The Guts, Gags and Glory of a Lot of Wonderful Guys" was the movie's somewhat misleading and horribly alliterative tagline), 'Battleground' remains a tough, realistic military picture that faithfully honors the brave soldiers who helped the Allies win a critical skirmish in the closing months of World War II. It may not be as raw as more contemporary war flicks, but it rarely pulls any punches. And for a film made so closely on the heels of the events it depicts, that's worth noting and admiring. 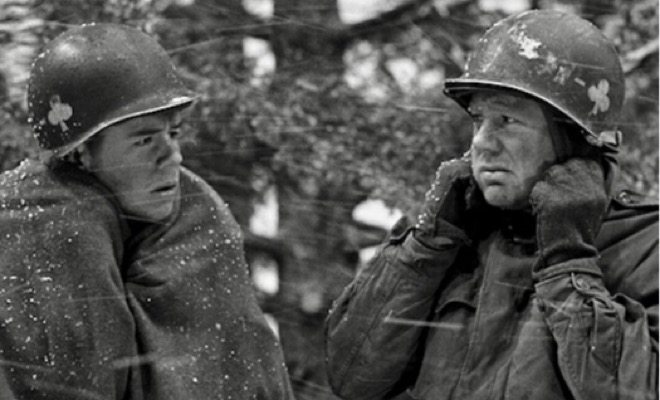 'Battleground' arrives on Blu-ray packaged in a standard case. Video codec is 1080p/AVC MPEG-4 and audio is DTS-HD Master Audio 2.0 mono. Once the disc is inserted into the player, the static menu without music immediately pops up; no previews or promos precede it.

Warner Archive produces another winning 1080p/AVC MPEG-4 transfer of a classic film. Though the setting of 'Battleground' is rather bleak, the picture often looks vibrant, thanks to excellent clarity and contrast, both of which help honor Paul C. Vogel's Oscar-winning cinematography and make the tense action seem more immediate. A couple of sequences appear overly grainy, but most of the time the image is sleek yet very film-like, and no nicks, lines, or scratches sully the pristine source material. Blacks exude a lovely richness, crisp whites keep the snowscapes from blooming, and superior gray scale variance nicely renders the shades in between. The falling snow is especially well defined and the omnipresent fog thinly veils the picture without obscuring any critical details. Close-ups sharply highlight the soldiers' careworn faces and the dirt and grime that often dot them, and any digital anomalies or enhancements escape notice. 'Battleground' may be close to 70 years old, but this stellar transfer masks its age well.

The DTS-HD Master Audio 2.0 mono track supplies clear, well-balanced sound that really puts us in the heat of battle. Sonic accents like shrieks, exploding mortar rounds, the rat-a-tat-tat of continuous gunfire, and the roar of overhead air squads are crisp and distinct, while subtleties like wind and the crunching of boots as they trudge through the snow gently enhance the soundscape. Though Lennie Hayton's rousing music score only plays at the beginning and end of the film, it exudes a robust fullness of tone, and all the dialogue is easy to comprehend. No distortion is present and age-related imperfections, such as hiss, pops, and crackles, are completely absent. War movies often can be a cacophonous mess, but this excellent track strikes all the right notes.

All the extras from the previous DVD have been ported over to this Blu-ray release.

'Battleground' may not feature non-stop action, but few World War II movies better depict the day-to-day life of a soldier, the danger and drudgery a unit continually faces, and the camaraderie that keeps everyone sane. A top-flight ensemble cast led by Van Johnson, John Hodiak, and James Whitmore and assured direction from William A. Wellman help this fine film brandish a realistic edge, and Warner Archive honors it with first-rate video and audio transfers and a couple of vintage supplements. Even if you're not a war movie fan, you'll appreciate the craftsmanship of 'Battleground'  and find it to be an engrossing human portrait of courage, stamina, and grace under pressure. Recommended.

Sale Price 17.99
Buy Now
3rd Party 14.4
In Stock.
See what people are saying about this story or others
See Comments in Forum
Previous Next
Pre-Orders
Tomorrow's latest releases