It was never just a game. Inviting audiences again into the lore of the spirit board, Ouija: Origin of Evil tells a terrifying new tale in 1967 Los Angeles. A widowed mother and her two daughters add a new stunt to bolster their séance scam business and unwittingly invite authentic evil into their home. When the youngest daughter is overtaken by the merciless spirit, this small family confronts unthinkable fears to save her and send her possessor back to the other side.

Sometimes, walking into a production with the lowest of expectations is precisely what is needed in order to be surprised and feel satisfied by a movie that should, by all accounts, be abysmal and utterly terrible. Take 'Ouija: Origin of Evil' as a case in point. Based entirely on the grounds of being a sequel/prequel to the dreadfully stupid 2014 horror feature inspired by the Hasbro board game, this follow-up should not have turned out as frightfully satisfying as it did. In fact, experience has taught us to be wary of sequels because they are rarely as good as its predecessor and almost always worse. However, 'Origin of Evil' goes down as one of those extremely rare instances where the sequel is decidedly superior. And amazingly, the filmmakers take it one step further by making the first movie a completely unnecessary watch, allowing those who suffered it simply out of curiosity to forget its existence. Even those who've never seen the now-pointless 'Ouija' will be more than content with this terrific supernatural chiller.

Much of the film's success should be credited to director Mike Flanagan, who also cowrote the screenplay with Jeff Howard. The two had previously worked together in another surprisingly good but largely ignored psychological horror flick, 'Oculus,' where they proved an excellent and imaginative pair. Flanagan followed that success with one of the best, if not THE BEST, horror movies of 2016 in 'Hush,' which unfortunately, remains unheard of outside of the most devoted horror-hound circles. Considering all that, it would seem he could be one of the most talented filmmakers working in the horror genre, yet he's arguably the least talked about. At the moment, the supernatural fantasy thriller 'Before I Wake,' starring Kate Bosworth and Thomas Jane, has been shelved indefinitely, which is a real shame given Flanagan's current track record. He has exhibited a great eye for generating an involving sense of terror, expertly using the frame and composition to pull his audience into the nightmarish experience of his characters. 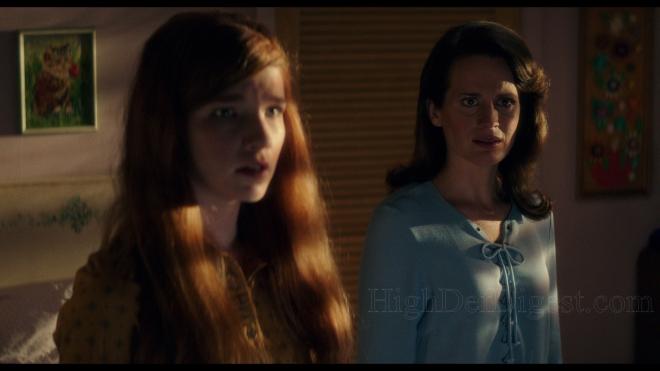 Instead of inundating this low-budget shocker with the usual array of jump scares and ineffectual gore diseasing the genre as of late, Flanagan injects the franchise with classic, moody tropes from the possession horror classics of the 1970s. It's a smart and very welcomed approach for a plot set in 1965 where recently widowed Alice Zander (Elizabeth Reaser) does the best she can to keep her still bereaving family afloat. With unpaid bills and the threat of foreclosure stacked against her, Alice works from home as a spiritual medium, excusing staged séances as helping paying customers through the grieving process. Her daughters, Pauline (Annalise Basso) and Doris (Lulu Wilson), occasionally assist in the hoax. But when she decides to include a Ouija board in the act, she discovers little Doris is a natural, money-making clairvoyant, though she mostly channels the spirit of a mysterious Marcus. For anyone all-too familiar with this setup, the supposedly friendly spirit turns out far more powerful and dangerous.

Staunch, dedicated genre fans will quickly note the premise for 'Ouija: Origin of Evil' vaguely familiar to William Friedkin's 'The Exorcist,' trading Regan and Captain Howdy for the innocent girl simply desiring to communicate with her deceased father. Henry Thomas also makes an appearance as the local priest with a tragic past wanting to help the family through their strife. But rather than being a weakness of the movie, Flanagan and cinematographer Michael Fimognari use it as a source of inspiration, even taking a moment to homage the 1973 classic when Thomas's Father Hogan stands in front of the Zander house similarly to Max von Sydow's Father Merrin. While immersing the mother and the girls with an unsettling atmosphere that slowly grows thicker and more restrictive, the story deliberately progresses more unnerving and chilling. Ultimately, the sequel works and is superior to its predecessor, exceeding expectations, because the filmmakers favor a spooky, creepy vibe over tediously predictable jump scares.

Universal Studios Home Entertainment brings 'Ouija: Origin of Evil' to Blu-ray as a two-disc combo pack with an UltraViolet Digital Copy. The Region Free, BD50 disc sits comfortably opposite a DVD-9, and both come inside a blue, eco-elite case with a textured, lightly-embossed slipcover. After a few skippable trailers, viewers are taken to a menu screen with the usual options along the left side, full-motion clips and music playing in the background.

The surprisingly good sequel plays games on Blu-ray with a fantastic, near-reference 1080p/AVC MPEG-4 encode, made from a fresh, squeaky-clean digital source. Flanagan and cinematographer Michael Fimognari have taken an interesting approach to the material by shooting entirely in soft-focus diffusers. This is intentional to give the story a lulling, starry-eyed appeal meant to remind viewers of the photography of Gilbert Taylor ('The Omen'), Owen Roizman ('The Exorcist'), Fred J. Koenekamp ('The Amityville Horror'), Richard C. Kratina ('The Sentinel') and other such possession movies of the 1970s. The filmmakers even went so far as to digitally add cue marks in the top right corner of the frame, another minor feature giving the production an old-fashioned, dated feel to complement the story.

Beneath the stylized photography, we discover excellent, razor-sharp definition of the little furnishings decorating the Zander household. In spite of all the dark shadows practically showering the inside of their home, even in daylight, tiny objects in the distance are plainly visible and distinct. This is largely thanks to outstanding brightness levels, showing inky rich, stygian blacks while still allowing for delineation to break through the darkest portions. Facial complexions reveal natural, lifelike textures, and the fabric in clothing and furniture are detailed throughout. Contrast is pitch-perfect with brilliant, flowing whites, giving the 1.85:1 image a lustrous, sunny disposition. The deliberate cinematography also permits primaries to brilliantly shine with intensity while secondary hues glow with animated vividness.

Universal Studios decides to furnish the bereaving family with the customary DTS-HD Master Audio soundtrack, which is not a bad thing not is it a point of complaint. However, the movie was released in Dolby Atmos to cinemas, but not home theaters.

Nevertheless, the track makes for an enjoyable listen with plenty of activity and directionality in the rears, generating a satisfyingly spooky soundfield. The surrounds are not always employed, noticeably missing out on a few good opportunities for sending chills down the listener's spine, but still, several ambient effects discretely pan across the room with chilling effectiveness. Like the video, the sound design might also be intentional, largely preserving the action in the front soundstage when a variety of noises move across the screen convincingly. This creates a very broad and expansive soundscape, exhibiting outstanding clarity and detail in the midrange. Even at its loudest, the lossless mix maintains excellent distinction and separation of every footstep, brash bang and the sudden swell of the music. Bass isn't particularly standout, but it delivers a palpable weight and presence to the action and The Newton Brothers's score. All the while, vocals remain precise and well-prioritized amid the family's terrifying ordeal.

'Ouija: Origin of Evil' is one of those rare cases where the sequel exceeds all expectations and is superior to its predecessor with a story that's more involving and deliberately paced to generate the scares. Writer and director Mike Flanagan and his crew smartly rely on mood and atmosphere while essentially doing without jump scares and pointless gore, making it one of the more satisfyingly memorable horror films of 2016. The Blu-ray package arrives with a near-reference video and an excellent audio presentation. Supplements are disappointingly light, but the overall package is well-worth the price for those looking for a genuinely spooky horror flick.

Sale Price 8.78
Buy Now
3rd Party 4.8
In Stock.
See what people are saying about this story or others
See Comments in Forum
Previous Next
Pre-Orders
Tomorrow's latest releases