In Ouija, a group of friends must confront their most terrifying fears when they awaken the dark powers of an ancient spirit board. Stiles White directs the supernatural thriller that is produced by Platinum Dunes partners Michael Bay, Andrew Form and Brad Fuller (The Purge, The Texas Chainsaw Massacre, Friday the 13th) alongside Blumhouse Productions’ Jason Blum (Paranormal Activity and Insidious series, The Purge), Bennett Schneir (Battleship) and Hasbro.

You've gotta marvel at the level of awfulness in a movie that within a span of three minutes sets down some ground rules and immediately breaks them in order to motivate the plot. In 'Ouija,' two girls sit in a darkened room while one explains to the other to never play the game alone or in a cemetery — you know, the sort of instructions not actually expressed or written anywhere except in the rubbish imaginations of the filmmakers. They are silly urban legends used as a plot device, which is then stressed with a completely bogus lyrical rhyme that apparently must be said before playing. After a rather pointless scare about looking through the eye of the small, heart-shaped planchette, we suddenly flash-forward to the present where the girls are now "besties," but the one who expressed the rules earlier is seen playing the game by herself. And later, we find out her house rests above a grave; thus breaking the second rule.

And before anyone yells "Spoiler Alerts," knowing that little tidbit actually doesn't give away anything since apparently, the makers of this terribly generic creeper fail to even acknowledge this dainty morsel — something that would suggest some level of forethought and intention on the part of the writers, of which there are two: Juliet Snowden and Stiles White. Sadly, the fact that the pair, the latter of which is a Stan Winston Studio's special-effects artist alum making his directorial debut, fail to use this story detail or even mention it demonstrates their storytelling skills. (Unless there is some large secret following for the Sam Raimi produced 'The Possession,' their best known effort is the Nicolas Cage vehicle 'Knowing.') It's almost as if they didn't even know they stumbled upon a seemingly clever twist, which is in large part the problem with this production lamely inspired by the popular Hasbro board game. 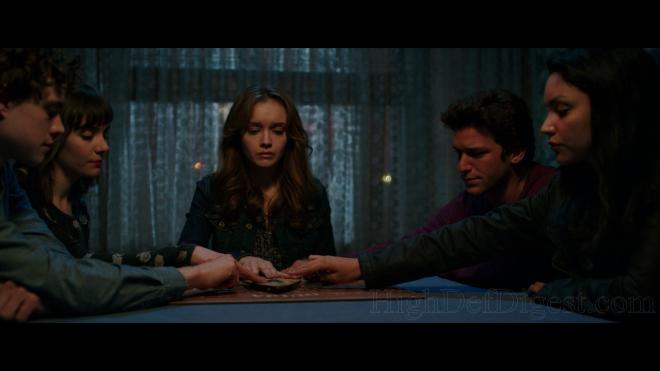 And the fact that the game, based on the spirit board that supposedly allows users to communicate with the dead and popularized during late 19th and early 20th Century séances, has served as a central device to numerous supernatural horror films, most famously in William Friedkin's 'The Exorcist,' also shows a glaringly obvious lack of originality. This extends to a crowd of stale, stereotypical teenagers that can't seem to decide if they are familiar with the game or not, acting as if shocked to see it for the first time and then as if they've known of it all along. The suicide of the opening's solo player (Shelley Hennig) summons five friends together to play and disturb her for understanding her actions. Laine (Olivia Cooke) is the self-imposed leader and her subplot with rebellious sister Sarah (Ana Coto) is an outright nuisance. The other three (Daren Kagasoff, Douglas Smith and Bianca A. Santos) literally serve no purpose other than to have die in later scenes. We don't a care for single one.

An embarrassingly bad, and not in the least bit unintentionally comical sort of entertainment, 'Ouija' relies too much on standard, pedestrian tactics to produce scares. And the in the shameless, inexperienced hands of White, every scare jump and creepy, unexplained noise ultimately feels as if forcefully pleading with the audience to be scared. Where precisely to lay blame is somewhat tricky since the production is low-grade shoddiness all around, starting with the concept itself. Hasbro Studios wanting to adapt the property is surprisingly not at fault because previous efforts ('G.I. Joe,' 'Transformers' and to a lesser degree 'Battleship') have proven enormous success. And as bad as the end product may be, this little flick, it turns out, was worth the risk, swindling gullible moviegoers of their hard-earned cash with its illusions of spirit rapping and table lifting. But in the end, the only real victim in this whole mess is the innocent board game.

Universal Studios Home Entertainment brings 'Ouija' to Blu-ray as a two-disc combo pack with an UltraViolet Digital Copy. The Region Free, BD50 disc sits comfortably opposite a DVD-9, and both come inside a blue, eco-elite case with a shiny, glossy slipcover. After several skippable trailers, viewers are taken to a static menu with music.

The nth iteration of a movie revolving around the popular spirit board debuts on Blu-ray with a highly-detailed 1080p/AVC MPEG-4 encode. Shot entirely on HD cameras, the freshly-minted transfer shows distinct, sharp lines in the foliage and exposes the tiniest object and furnishing in the background. Facial complexions are not the most revealing, likely the result of heavy make-up, but pores, blemishes and wrinkles in older cast members are plainly observable. Spot-on contrast allows for excellent visibility in the far distance, and black levels are full-bodied, providing the 2.40:1 image with very good dimensionality. However, shadow details are less than satisfying, but that could be a deliberate choice for adding suspense. Primaries are lush and vibrant while secondary hues are accurate and warm, making this presentation quite impressive.

Failing to leave a memorable or even frightening experience in the audio department, the DTS-HD MA soundtrack accompanying the supernatural adaptation is nonetheless capable with a few decently effective moments. Although the music of Anton Sanko consistently bleeds into the surrounds to generate an engaging environ, rear activity is reserved for the scares and shocks. Normally, this would be precisely as expected for a horror flick, but in this case, the lack of atmospherics is distractingly noticeable, as if the town was devoid of wildlife or any sign of neighbors. However, discrete effects are employed amusingly for generating a fun and spooky soundfield with satisfying directionality and excellent panning.

The front imaging displays a wide and varied soundstage with detailed clarity in the mids, great separation between the channels and fluid movement across the screen. Low bass is weirdly both weighty and punchy, but at the same time, there isn't much action in those frequencies to really make it standout or add any discerning depth. Nonetheless, with distinct, well-prioritized vocals in the center, the lossless mix pleases and gets the job done for a movie that fails to produce a single scare.

Within a span of three minutes, the characters of a yet-another toy line based film 'Ouija' set some ground rules and immediately break them for the sake of the plot, which is itself laughably absurd. Incapable of even offering the unintentionally comical sort of entertainment, the adaptation is an abysmal failure at conjuring a single moment of terror, relying too much on cliché standards and turning the entire production into a chore. The Blu-ray arrives with an excellent audio and video presentation, but the supplements are easy throwaway material. The overall package is another sad case of good disc, bad flick and those willing to venture on this are better off with a rental first.

Sale Price 25.32
Buy Now
3rd Party 2.47
In Stock.
See what people are saying about this story or others
See Comments in Forum
Previous Next
Pre-Orders
Tomorrow's latest releases