Tales from the Hood: Collector's Edition

Welcome to the 'hood of horrors!

Stack, Ball and Bulldog arrive at a local funeral parlor to retrieve a lost drug stash held by the mortician Mr. Simms (Clarence Williams III). But Mr. Simms has plans for the boys. He leads them on a tour of his establishment, introducing them to his corpses. Even the dead have tales to tell and Mr. Simms is willing to tell them all. And you better listen – because when you're in the 'hood, even everyday life can lead to extraordinary terror.

Adding to the laundry list of fond moviegoing experiences from my youth that began in the mid-80s, Tales from the Hood is another one of those productions that seem difficult to discuss without looking at them through rose-colored nostalgia glasses. I still remember driving with my best friend at the time to our local Edwards Theater and sitting down to enjoy this humorously corny horror anthology. And it is pretty corny and ridiculous because it took a great deal of inspiration from Tales from the Crypt — obviously, duh! — and other such late-night television programs, which were very popular in the late 80s and early 90s.

The twist in this movie from Fear of a Black Hat director Rusty Cundieff and produced by Spike Lee is that each story comes with an urban theme. This collection of spooky tales differentiated itself by highlighting real social issues concerning urban areas, which was another type of film subgenre that was very popular at the time as well: the urban film. Mix the whole thing together with a heavy dose of over the top horror and a dash of comedy for flavor, and we have a strange concoction of fright-filled laughter with an intriguing social-conscious aftertaste.

Setting up this latent comedic tone, Cundieff, who co-wrote the script with Darin Scott, kicks things off with a trio of gang members (Samuel Monroe Jr., Joe Torry and De'Aundre Bonds) arriving at a funeral home. Although we perceive the young men as tough thugs, one is deathly afraid of entering the building while the youngest of the three is fascinated by scary things, but the leader is strictly about conducting business with the owner Mr. Simms (Clarence Williams III). Arguably, the best part of the whole movie is Mr. Williams's performance as the creepily eccentric mortician, playing the role of campfire storyteller much like the Crypt Keeper. Except, Williams wonderfully chews up the scenery as though doing his own impersonation of — perhaps, an homage to — Screamin' Jay Hawkins while delivering every juice line with grotesque, devilish enthusiasm. Understandably, he makes the drug dealers nervous, particularly Torry's Stack, cajoling them with the promise of found narcotics he wishes to sell them while also sharing the tales of his most recent customers' unhappy demises. 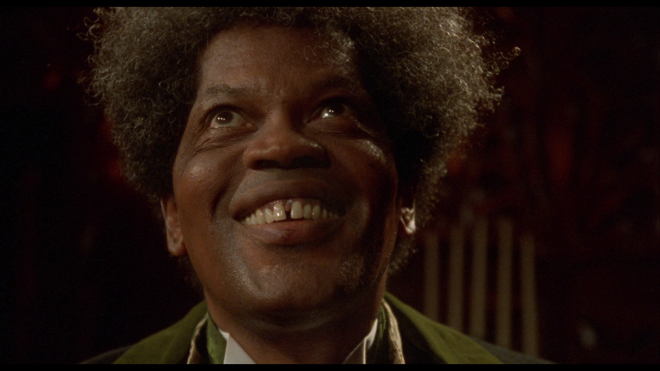 Watching the movie just over twenty years later, I'm both surprised and not surprised that each story remains as timely and relevant today as ever before. And two stories, in particular, will immediately jump out at audiences, signaling that 21st Century society has sadly not progressed enough. The first deals with rookie LAPD officer Clarence Smith (Anthony Griffith) too scared to report fellow cops for brutally injuring and murdering a local civil rights activist (Tom Wright). The subject remains just as touchy and controversial, if not more so in the age of social media and the internet. But aside from the zombie revenge slant, which makes for delightfully wicked fun, the piece is very interesting because the real twist is on the officer too scared to speak up and take action.

The other amazingly germane tale sees Southern senator Duke Metger (Corbin Bernsen) — an obvious allusion to David Duke and Tom Metzger — under heat and scrutiny for his ties with racist groups while in the middle of his campaign for reelection. Using a common fear of antique dolls, the former Klan member has his comeuppance after disrespecting the former slaves that once serviced the former plantation where he now resides. The past will always come to haunt us.

The other two in Tales from the Hood are as equally pertinent and drive home questions about people's roles in urban neighborhoods, specifically a need for change coming from within. David Alan Grier and Paula Jai Parker star in one of the anthology's sadder stories as the parents of a timid boy (Brandon Hammond) who fears the monster that enjoys beating him on a nightly basis. As a concerned teacher tries to investigate and intervene, it quickly becomes apparent this is a cautionary tale of domestic abuse where the boy discovers a hidden talent for battling the monsters in his life. The film ends with a curious, darkly twisted fantasy of a violent gang member (Lamont Bentley) offered the opportunity for rehabilitation after a psychologist (Rosalind Cash) performs an experimental procedure. Essentially, the morality tale is a commentary on urban violence with a rather alarming comparison to a bloodthirsty white supremacist's enjoyment of killing minorities.

It's the final nail on the coffin for a collection of nightmarish stories inspired by the real-life horrors of our contemporary world. And like our gracious mortician host, they may be comically outlandish, but that is just a deceptive ploy for making the reality pill a little easier to swallow.

Shout! Factory brings Tales from the Hood to Blu-ray as a Collector's Edition package under the distributor's Scream Factory line. The Region A locked, BD50 disc is housed inside the normal blue case with brand new reversible cover art and a cardboard slipcover.

At startup, the disc goes to a generic main menu selection along the bottom with music and full-motion clips. Unfortunately, according to the Shout! Factory website, the exclusive, limited edition poster of the newly commissioned artwork has already sold out.

The spooky tales find a new home in the Blu hood with a very satisfying 1080p/AVC MPEG-4 encode, making it a worthy upgrade from its standard-def neighborhoods and fans will want to move as soon as possible.

While it may not be the sort of mansion many would have liked or hoped, the transfer was taken from the best available elements, which appear to be in superb condition and would have benefitted greatly from a more thorough restoration, displaying comfortably bright contrast levels throughout. There are a couple moments where things tend to run a bit too hot with mild blooming, mostly during daylight exteriors but also related to the original photography, but it's nothing too egregious as to be a distraction. Definition and clarity, for the most part, remain detailed with distinct fine lines in the clothing, plainly visible objects in the background and in facial complexions. However, there are also a handful of times when resolution levels noticeably drop, leaving us with several soft and blurry scenes.

Presented in its original 1.85:1 aspect ratio, the transfer definitely feels at home in HD with an improved color palette, showing brighter, fuller primaries throughout while secondary hues are accurately and cleanly rendered. Flesh tones appear natural and healthy. Although shadows could be a tad stronger in a couple areas, on the whole, blacks are fairly rich and true with excellent detailing in the darkest portions of the frame. Awash with a very thin layer of grain, the cult horror anthology arrives with a welcomed and appreciable film-like quality on Blu-ray.

As is customary in Scream Factory titles, owners are given two listening options. However, both are DTS-HD MA 2.0 stereo soundtracks with one labeled "Alternate." I was unable to find specifically what the second Alt track is or where it originates from. Only guess is that it's an unprocessed and untouched version of the original, as it does sound more muted with a very minor bit of hissing noise in the background, which can go largely undetected when casually viewing the movie.

Switching between the two, I found myself enjoying the first stereo option because it sounds cleaner and takes better advantage of the entire soundstage. Imaging feels wide and spacious with an excellent sense of presence, generating a much fuller and more dynamic soundfield than its counterpart. The highs are crisper with better clarity and fidelity while the mids are noticeably detailed. The low-end is also a bit more robust with a slightly deeper punch during the various hip-hop song selections. Added to that, many of the ambient effects lend themselves well to the receiver's DSU function, discretely spreading a few random noises into the other channels while nicely expanding the music into the front heights. The Alt track also does well, but it's not quite as effective. Dialogue, in either option, is well-prioritized and precise, yet the first stereo design is arguably the preferred listening option.

Audio Commentary:  Writer and director Rusty Cundieff rides solo through memory lane down this familiar neighborhood, sharing various anecdotes from the set while explaining some of his creative process, a few technical details and commenting on some of the topical concerns in each story.

Welcome to Hell (HD, 56 min): A collection of cast & crew interviews talking about various aspects of the production, from story conception to the finished product. The people involved look back at the experience fondly and share their individual thoughts on each story's continued relevance.

Tales from the Hood adds to the laundry list of fond moviegoing experiences from my youth, finally hitting Blu-ray, and it's just as corny and ridiculously entertaining as I remember. From writer/director Rusty Cundieff and producer Spike Lee, the horror anthology highlighting social issues concerning urban areas amazingly remains relevant and timely. The Blu-ray moves into the neighborhood with a great audio and video presentation that improves dramatically over previous releases. With a decently satisfying set of supplements, the overall package makes a great addition to the cult library.