In 1962 Hitchcock and Truffaut locked themselves away in Hollywood for a week to excavate the secrets behind the mise-en-scène in cinema. Based on the original recordings of this meeting—used to produce the mythical book Hitchcock/Truffaut—this film illustrates the greatest cinema lesson of all time and plummets us into the world of the creator of Psycho, The Birds, and Vertigo. Hitchcock's incredibly modern art is elucidated and explained by today's leading filmmakers: Martin Scorsese, David Fincher, Arnaud Desplechin, Kiyoshi Kurosawa, Wes Anderson, James Gray, Olivier Assayas, Richard Linklater, Peter Bogdanovich and Paul Schrader.

Poll a smattering of film buffs about their favorite books, and more than likely 'Hitchcock/Truffaut' will be on their list. The transcripts of the extensive 1962 conversations between Alfred Hitchcock and François Truffaut helped elevate not only the reputation of the Master of Suspense, but also the perception of cinema as art. As Hitchcock expounded on the technique, philosophy, and visual chicanery that produced such classic thrillers as 'Psycho,' 'Rear Window,' 'North by Northwest,' 'Notorious,' and 'The Man Who Knew Too Much,' millions of movie fans got an unfiltered, intimate look into a visionary's mind and the creative process that inspired and obsessed him. 'Hitchcock/Truffaut' remains a top-selling film book, and the excellent 2015 documentary of the same name incorporates excerpts from those legendary audio tapes as it meticulously examines Hitchcock's film canon, the two men's historic tête-à-tête, and how both directors' personalities and experiences influenced their respective work.

Most notably, Kent Jones' film also shares the unique and fascinating perspectives of 10 renowned international directors, including Martin Scorsese, David Fincher, Peter Bogdanovich, Richard Linklater, Paul Schrader, Wes Anderson, Arnaud Desplechin, and Kiyoshi Kurosawa, who dissect Hitchcock's movies, analyze his methods, and candidly relate how Hitchcock continually inspires and dazzles them. Dozens of film clips illustrate their points, but unlike other celebratory documentaries, 'Hitchcock/Truffaut' delves beneath the surface of several Hitchcock films, taking an almost academic tack as it focuses on the multitude of factors that contribute to mood, heighten tension, and produce memorable and innovative images.

Scorsese calls the 'Hitchcock/Truffaut' book "revolutionary" and Bogdanovich says it "conclusively changed people's opinions about Hitchcock," forcing them to at last regard the director as a serious artist. Truffaut, who greatly admired Hitchcock from the time he was a young boy, immersed himself in the project, treating it with as much importance as one of his own films. According to the documentary, both men "lived for and through the cinema," and because Truffaut felt Hitchcock freed him as an artist, he sought to free Hitchcock from his reputation as a light entertainer. And he spectacularly succeeded.

As does this documentary, which further cements Hitchcock's standing as one of the premier auteurs of cinema. Though it sadly skips over most of his early British films, 'Hitchcock/Truffaut' examines in detail two of Hitchcock's most famous and influential American movies - 'Vertigo,' where he favors "poetry over action," and 'Psycho,' in which one story bleeds seamlessly into another that veers off into a decidedly different direction. With insight and cohesion, the documentary - and the contemporary directors who populate it - delineate the thematic and stylistic philosophies that guided Hitchcock over the course of his five-decade career and the often innovative techniques he coined and implemented. We learn how his unorthodox use of space and size impacts various scenes, and how both his expansion and contraction of time and focus on key objects heighten tension and suspense. We also see examples of the dream-like quality that pervades his work, his clever use of rear projection, silence, and silent film techniques, and how he depicts moral dilemmas, subconscious yearnings, and gut-wrenching guilt on screen.

While Hitchcock respected talent, he never allowed his performers to get in the way of his film. He clashed with Montgomery Clift on the set of 'I Confess' over Clift's constant assertions about character motivation, and that experience led him to make the famous - and controversial - statement to Truffaut: "All actors are cattle." Hitchcock worked with some of the best, but rarely regarded them as anything special. To him, they were simply part of the overall mise-en-scène, a cog in a larger creative machine that served a specific purpose. Cary Grant and Ingrid Bergman thought it silly when Hitchcock directed them to walk across a room while kissing in 'Notorious,' but Hitch told them it didn't matter how awkward it felt, it would look terrific. And it did.

My major gripe with 'Hitchcock/Truffaut' is that it isn't long enough. Eighty-one minutes just isn't enough time to comprehensively examine this legendary director's work. (Humor, a huge element of Hitchcock's style, is all but ignored.) I also wish more films were individually dissected in the manner of 'Vertigo' and 'Psycho.' I would have loved to get under the skin of 'Foreign Correspondent,' 'Rear Window,' 'North by Northwest,' and 'The Birds,' among many others. In addition, it's a shame more of the movies aren't identified. The clips often come at a rapid pace, and though Hitchcock nerds like myself will be able to name almost all of them, neophytes will be in the dark...and those new fans need to be cultivated.

Like the book, 'Hitchcock/Truffaut' is a documentary for the serious film fan, and if you're serious about Hitchcock - and to a lesser extent Truffaut - you won't be disappointed. Hitchcock is an indisputable icon of cinema, and this superior tribute makes his genius accessible. The vast assemblage of clips and cogent analysis combine to create a full-bodied portrait of a dedicated and innovative craftsman who changed the way we watch movies. And that's no small feat. 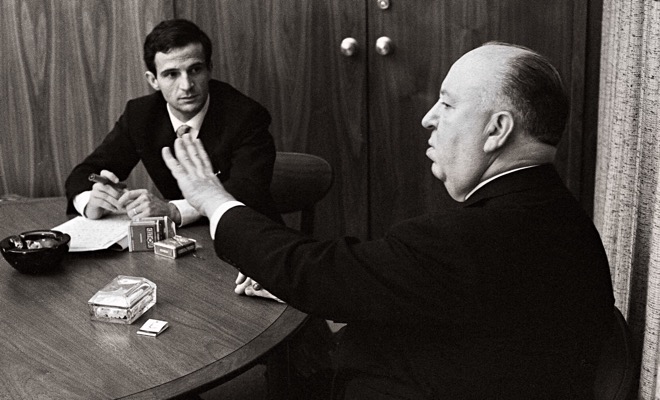 'Hitchcock/Truffaut' arrives on Blu-ray packaged in a standard case. Video codec is 1080p/AVC MPEG-4 and audio is DTS-HD Master Audio 5.1. Once the disc is inserted into the player, a promo for "the best of Alfred Hitchcock" on Blu-ray and previews for 'In a Valley of Violence' and 'A Tale of Love and Darkness' precede the static menu with music.

Documentaries about vintage Hollywood movies often pose transfer issues due to the multiple film stocks and varying source materials the director chooses to use. But thanks to the meticulous preservation of Hitchcock's cinematic legacy, the 1080p/AVC MPEG-4 rendering of 'Hitchcock/Truffaut' is a joy to behold. Whether we're watching full-frame silent snippets from the 1920s, lush Technicolor scenes shot in CinemaScope, or contemporary interview sequences, the image is always well defined and distinguished by eye-popping contrast. All the film clips look spectacular, with each sporting an appropriate degree of grain for its respective period. The clips from 'Vertigo' exude a glorious lushness, with intense color saturation heightening the dream-like mood, while the stark black-and-white photography of 'Psycho' and Truffaut's 'The 400 Blows' looks crisp and clean. The interviews with modern directors blend seamlessly into the fabric, and no digital hiccups or print defects disrupt the film's flow. Both Hitchcock and Truffaut fans will be very pleased with this spic-'n'-span transfer that appropriately honors the timeless work of both craftsmen.

The DTS-HD Master Audio 5.1 track supplies clear, well-modulated sound that makes up in presence and depth what it lacks in surround elements. Excellent fidelity enhances both original Hitchcock film music and Jeremiah Bornfield's score, which cleverly pays homage to various Hitchcock themes without copying them. All the comments from Scorsese, Fincher, Linklater, and other contemporary directors are easy to comprehend, as are the excerpts from the original Hitchcock-Truffaut tapes and various vintage films. Despite the array of sound sources employed, levels remain fixed, so no volume tinkering is necessary. A wide dynamic scale handles all the highs and lows without a hint of distortion, and no age-related defects plague the film clips. Documentaries aren't generally audio showcases, but thanks to Hitchcock's interest in and respect for sound, this track is potent enough to impress.

A few supplements nicely round out the disc.

Though it can't replace the book upon which it is based, 'Hitchcock/Truffaut' is an essential companion piece that expands upon the text by integrating impressions, evaluations, and unbridled praise from an array of top contemporary directors. Classic clips abound in this thoughtful, reverential, and always fascinating tribute to two masterful moviemakers whose visions helped shape and expand the art of film. Universal's Blu-ray presentation seamlessly weaves together the vintage and contemporary material with top-notch video and audio transfers, and a few interesting supplements delve deeper into the technique and personalities of both men. Though too brief for my taste (I could watch detailed analyses of every single Hitchcock movie back to back and not get tired), 'Hitchcock/Truffaut' captures the essence of the Master of Suspense and fosters an even greater appreciation for both his artistry and impact. If you're a Hitchcock fan, you've gotta get this disc. Highly recommended.

Sale Price 13
List Price 22.98
Buy Now
3rd Party 8.73
In Stock.
See what people are saying about this story or others
See Comments in Forum
Previous Next
Pre-Orders
Tomorrow's latest releases