A newly discovered 36-foot gorilla escapes from a freighter off the coast of Korea. At the same time an American actress is filming a movie in the country. Chaos ensues as the ape kidnaps her and rampages through Seoul. 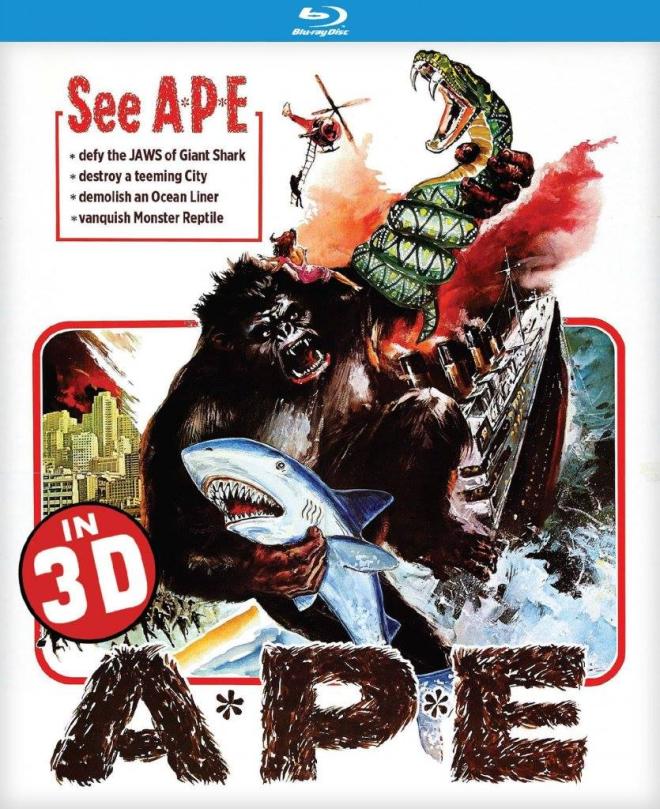 "Have you ever heard of an oil man shutting down a well that promises to produce 100 barrels a day? We don't live in that kind of world!"

I've mentioned in previous reviews how imitation can be a form of flattery. Well, sometimes that flattery can lead to a joke. A big, hairy, mammoth, joke of a movie that is so bad that it's actually honored as one of the Razzie Awards 100 most watchable terrible films of all time. I am of course referring to the hysterically terrible 1976 film 'A*P*E* - Attacking Primate monstEr - from schlock writer and director Paul Leder. With less than $25,000 and a rush to get the film finished ahead of John Guillermin's 'King Kong' reboot, Leder managed to create a riotous monster movie that makes Ed Wood's films look like visions of cinematic competence.

When a recently captured gigantic 36-foot-tall gorilla escapes from a cargo troller bringing it to Disney Land, South Korea is put on high alert as the monster reaches the mainland. With terrorized farmers fleeing the countryside, the South Korean army is at odds with their American counterpart Colonel Davis (Alex Nicol) about what to do with the creature. The South Koreans want to keep it alive and put it on display and reap the profits. The Americans want to blow it up ASAP. When the big ol' ape spots the beautiful American actress Marilyn Baker (Joanna Kerns), the fuzzy creature will destroy everything in its path to capture her and keep her for himself. As Marylyn's reporter boyfriend Tom (Rod Arrants) races to rescue his love, the combined American and Korean armed forces will have to decide whether or not it's worth saving the poor woman if it means they can bring down the monster and stop the destruction once and for all.

Don't let my five-star rating of the film fool you, this is a bad movie. It's terrible. Inept in virtually every respect as the titular monster is just a cheap party suit. The model work looks great until the creature starts breaking things and you can see the popsicle sticks holding everything together. The editing is shoddy with shots that frequently fail to match up to one another. The audio is a mess sounding as if the dialogue was recorded through a string and tin cans. It's just a terrible cheap 'King King' knockoff…and I loved every single silly minute of it! This is the perfect party movie. You grab your friends, get some good food and a ton of drinks, pop on the 3-D glasses and just go to town mocking this movie.

Yes it was shot in South Korea on a meager budget in 3-D with the actual South Korean military and apparently some U.S. troops, but when you see that poor sad actor "dancing" in the middle of a field as toy helicopters and bottle rockets fly by while slinging styrofoam rocks on strings at the camera, you're gonna need to sling some jokes in between taking a shot or two. I mean, how else are you supposed to respond after our titular monkey smacks down a flaming toy helicopter and then flips the camera the bird? Coupled with some real groaners like "He was just too big for a small world like ours" or when Joanna Kerns busts her clean persona as the mom on 'Growing Pains' by trying to seduce the monkey with a "Be gentle big guy," as she lays splayed out in his hand - you absolutely must laugh at it. Laughter is the only way you'll survive.

In point of fact, my first introduction to 'A*P*E*' was by slinging jokes at it. In my early college years, I helped one of my production buddies produce and air a riff show in the vein of 'Mystery Science Theater 3000' on the campus T.V. station. For the life of me, I wish I could remember the name of the show but I had some great memories helping out on it. In this case, my buddy was the primary host and one of his usual co-hosts got sick on the shooting day and I filled in without seeing the movie or knowing what it was. As it turned out, we got to knock around 'A*P*E*' for 90 minutes. Even in 2D, the film is a blast offering up plenty of riffing material, but now that I've seen it in its original 3-D presentation thanks to some impressive restoration work by 3-D Film Archive, I can't imagine watching it any other way. While the 3-D is effective and well staged - especially during the climatic "battle" - the cheap goofy effects work just makes this movie a hilarious watch and somehow completes the experience.

Make no mistake, this may be a terrible and hilarious film (whether intentional or otherwise), but I do have to point out that the late great director Paul Leder managed to do a lot with very, very little. $25,000! That was it. He shot in stereographic 3-D in Korea with actual military extras. Sure it's a cheap monster movie with a bad gorilla costume you can sometimes see the actor's wrists under the sleeves or a neck flap that hangs open, but damn it all, it's a fun flick. A bad one for sure. But a fun one. You don't care about the characters. You don't even care about the monster really, but the goofy inconsistent tongue-in-cheek tone and the overly dramatic pontificating by some of the actors makes the whole thing a gas. If you're a lover of schlock cinema, 'A*P*E*' should be in your wheelhouse. You're in for a great time if you just give yourself over to the lunacy as you would for 'Plan 9 From Outer Space' or 'The Creeping Terror.' I truly hope there are more "gems" like this one out there in the world waiting to be rediscovered and brought to Blu-ray.

'A*P*E*' arrives on Blu-ray courtesy of Kino Lorber and their Studio Classics label. Pressed onto a Region A BD-50 disc, the disc is housed in a standard sturdy Blu-ray case. The disc loads directly to a static image main menu with traditional navigation options. If you have a 3-D enabled television, the 3-D menu presentation automatically loads with the option to switch to a 2-D presentation.

To preface this review, I need to again mention my previous experience watching a terrible region-free DVD import of the film for that school T.V. show. 'A*P*E*' never looked good. It's always been choppy, with hair and debris were stuck in the gate when they filmed it. The flaws were so numerous to the point that I had no idea what sort of restoration I was about to witness when I loaded up this Blu-ray. While the presentation is still inherently problematic due to the film itself, 3-D Film Archive has fought the good fight and brought together a rather pleasing and solid transfer for this schlock wonder. Details are crisp and well defined. Film grain is present and only ever problematic during the opening night scene. Colors have plenty of bright primary dominance and healthy flesh tones. Black levels - aside from the crushed and near completely black opening - are solid allowing for a real appreciation of depth. That said, that opening night scene on the toy boat looks pretty terrible and that's because the production was flat broke and they were shooting the scene in a pool with a flashlight. Daylight scenes look great and you can really appreciate the toy tanks and helicopters as they take down the poor actor stuffed into a gorilla costume.

The 3-D presentation is wonderfully entertaining and just adds to the fun. The Left/Right eyes are synced well without any serious cross talk or ghosting effects. In fact, there are some pretty impressive out-of-the-screen moments as well as some deep and distant background depth to appreciate. There is a rockslide effect that was particularly fun and the numerous shots of people running around South Korea are a real gas. There are a couple bits where the filmmakers chose some questionable camera setups that cause some slight right/left eye conflict but thankfully it's only minor and doesn't ruin the experience as a whole. All around I'm incredibly impressed with this effort considering the cheap quality of the production and the reputation of the movie as a whole. This is much better than I could have ever expected for this film.

Presented with an English DTS-HD MA 2.0 mono track, 'A*P*E*' has the sort of audio quality one would expect from an amateurish no-budget production. Dialogue tends to have a soft almost lifeless quality to it at times or a harsh tinny sound to it mainly due to the fact that the filmmakers had next to nothing resembling a post-production budget. You can tell a number of lines weren't looped later and were recorded on set so there is some odd background noise every now and again. The few lines that were looped were done so poorly the actors are clearly way off script. But that's a baked in effect and not an issue with this transfer. If anything this transfer makes the dialogue intelligible as the copy my friend and I had to riff off of was so soft we would go long stretches without making jokes simply because we couldn't hear what was being said. Hiss is present through some of the run but thankfully nothing too distracting. There is an occasional pop here and there and some drop-off, but nothing serious - especially when you take into account you're watching a movie called 'A*P*E*.' In spite of the flaws, levels are well tuned so once you've got your volume at a setting you can enjoy, you shouldn't need to adjust the volume.

Audio Commentary: This commentary features Chris Alexander of Fangoria fame along with historian Hillary Hess. This is a hilarious and often entertaining commentary track that is loaded with facts and riffs about the action on screen!

'A*P*E*' may not be the 8th wonder of the world, but it's an entertainingly schlocky delight! While director Paul Leder may not have had the best production values, effects, costumes, or budget, he still managed to pull together a movie that is at the very least, one of the funniest things you're going to see. Watch it for the toys. Watch it for the cheap gorilla suit, from which you can see the actor's T-shirt poke through the holes. Especially watch it for the 3-D. In 2-D it's just fun, but in 3-D it's a real riot as all of the cheap effects and silliness come together to create a parade of cinematic schlock. Lovers of bad cinema will be well within their element with this one! Kino Lorber has done another terrific job with this release. The restoration by 3-D Film Archive is another in a growing catalog of examples of how they're a leader in restoring classic stereographic films to their former glory. While the extras package may be slim, the Chris Alexander commentary is a riot and well worth listening to. It may be needless to say at this point but I'm calling 'A*P*E*' Highly Recommended - for a great time with friends and family who love to torture themselves with terrifically bad movies in 3-D!

Sale Price 19.99
Buy Now
3rd Party 12.72
In Stock.
See what people are saying about this story or others
See Comments in Forum
Previous Next
Pre-Orders
Tomorrow's latest releases