The Flash: The Complete Third Season

Struck by the supercharged fallout of a particle accelerator explosion, forensic scientist Barry Allen becomes the fastest man alive: The Flash! With his newfound time-warping speed and help from the S.T.A.R. Labs team - Caitlin Snow, Cisco Ramon and Harrison Wells - and his adoptive family, Detective Joe West and Joe's daughter Iris, the Scarlet Speedster runs circles around other metahumans set on wreaking havoc in Central City, while traveling between alternate universes and protecting our world from otherworldly threats. Last season, new dangers arrived from a parallel earth known as Earth-2, under the direction of an evil speedster named Zoom. In Season Three, Barry faces the unknown, as he irrevocably alters the timeline by saving his mother from the clutches of the Reverse-Flash. The only question now is - as he wrestles with the consequences of his own Flashpoint Paradox, including the wrathful Speed God Savitar - will he be able to find a way out?

"I always wanted to be a Jedi!"

By smartly tackling a storyline about the consequences of being a hero as well as a human, The Flash: The Complete Third Season sidesteps a major landmine that hobbled Arrow and remains solid comic book entertainment while proving it still has room to run and grow.

Tired of living in a world of loss where his loved ones die, Barry Allen (Grant Gustin) travels back in time to prevent his mother's death at the hands of Reverse Flash (Matt Letscher). While the new timeline allows Barry to enjoy the love and warmth of a life with his living mother and father, this Flashpoint has had some unforeseen consequences that must be fixed. When Barry must undo his mother's prevented murder - things don't go back together as they should have. Things have changed. Iris (Candice Patton), Joe (Jesse L. Martin), Wally (Keiynan Lonsdale), Cisco (Carlos Valdes), and Caitlin (Danielle Panabaker) and the happy supportive Team Flash they once were. Barry's actions changed each of their lives in surprising and in some cases, devastating ways.

To add insult to injury, Barry returns to this fractured present timeline learning he has a new colleague Julian Albert (Tom Felton) at Central City PD's CSI unit who has a particular dislike for metas like The Flash and the enemies he faces. If trying to make peace with his friends and family weren't hard enough, a mysterious villain known as Alchemy and his master, the god of speed Savitar. When Barry accidentally travels to the future and sees Savitar kill Iris, the race is on to find a way to save the love of his life while defeating his most difficult foe yet. 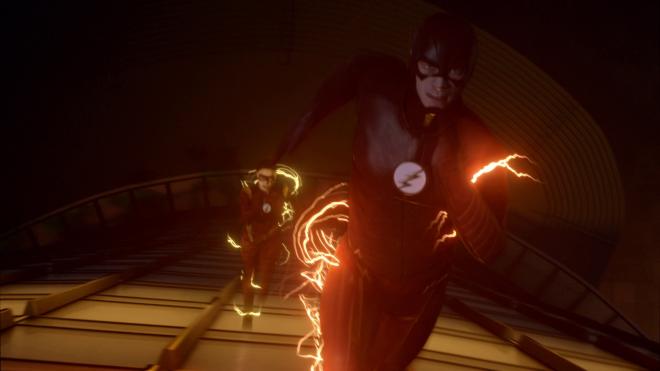 Throughout the run of The Flash thus far, the show has always had a sort of family-friendly police procedural vibe to it. There is an overarching storyline to give the show a direction while Flash outruns and knocks out a Meta-of-the-week supervillain. We get to enjoy the return of Gorilla Grodd, Captain Cold (Wentworth Miller), and a few other choice bad guys from previous seasons while we are given tantalizing snippets of Alchemy and his master Savitar. While Barry may struggle to find a solution to his troubles, you can always count on him and Team Flash to concoct a crazy scheme to win the day. It's fun, predictable, lighthearted and up to this point had been relatively consequence-free.

As the third season tends to be the make or break point for most shows, The Flash: The Complete Third Season wisely doesn't completely upend the apple cart while also making a slight course correction in tone. The show still feels somewhat light and fun most of the time, this season takes a bit darker turn as the main theme of the season is about consequences. Every time Barry tries to do the right thing by either traveling back through time or across dimensions, there is a negative and unavoidable consequence of that action. Sometimes that means someone gets hurt, other times it means losing the trust of a friend. It's about living with those consequences and still trying to do the right thing and suiting up to be a hero that Barry has to learn about with this season.

Not every episode may be a winner, at 23 episodes there are more than a few cast off bloat bits, but the show never fails to lose focus and move forward. It establishes a new human foil for Barry with Tom Felton's welcome addition as Julian while also introducing a new fearsome villain. Unfortunately, where the show stumbles is with Candice Patton's Iris West. As the love of Barry's life and his primary motivator, once it's learned she's Savitar's target, she has little to do but sit there and not die. The previous seasons had Iris act like a spunky take-no-crap reporter who wasn't afraid of a little danger. For most of this season, she's reduced to the unfortunate helpless woman cliche. Hopefully, this gets fixed for next season as there isn't any excuse for Iris to be this much dead weight.

Taken as a whole, this is a very satisfying outing. After Season Two sorted out a lot of the rather repetitive material about the definition of family, the show was finally allowed to explore some darker thematic territory without making things too dour or without fun. On top of that, we got to enjoy the emergence of Keiynan Lonsdale's Wally West as Kid Flash as well as Violett Beane's outing as Jesse Quick. Why have one hero speedster when you can have three? Toss in some cameo appearances from The Arrow, Supergirl, and The Legends of Tomorrow and you have a nice little television expanded universe. That isn't to say this season was flawless, I am getting tired of the show finding ways for Barry to travel back through time again and again, but overall I dug this season and can't wait for Season Four to arrive. The cliffhanger ending of this round is no place to stop!

The Flash: The Complete Third Season arrives on Blu-ray courtesy of Warner Bros. in a 4-disc + Digital HD set. All 23 episodes of the show are pressed onto four region free BD-50 discs. Each disc opens directly to a static image main menu with traditional navigation options. Each disc also offers its own selection of bonus features. Also included in the set is a booklet containing brief episode recaps. Episodes can be viewed one at a time and accessed at the main menu or through an automatic "play all" feature for binge watching.

The Flash: The Complete Third Season zips onto Blu-ray with a terrific 1.78:1 1080p transfer. After three seasons now, the one aspect of the show I'm always impressed with is the visual flair. This is an action-packed, colorful show with tons of practical and CGI effects. Costuming is intricate and impressive and throughout the show remains bright and colorful. Details are strong throughout allowing fans to appreciate fine facial features as well as their favorite superheroes impressive costuming. Colors are bright and bold with plenty of primary activity - especially reds, yellows, and blues. As more heroes and some of our supporting characters have gotten powers they also get their own color schemes making the show very vibrant. Black levels are also on point with deep blacks giving the show a nice sense of three-dimensional depth. If there is one detraction I have is when there is an excessive amount of CGI. This show's episode to episode budget just isn't enough to pull off cinema-quality effects and the results, unfortunately, show at high resolution. The "Attack on Gorilla City" episode, in particular, is a very effects heavy one and at times the CGI can have a flat weightless quality. But that is my only gripe for an otherwise stellar visual presentation.

The Flash: The Complete Third Season runs away with a terrific English DTS-HD MA 5.1 audio mix for each episode. Dialogue, music, and effects sound terrific and feature a hell of a layered presentation. There is plenty of space around the elements giving each scene a notable sense of space and dimension. Dialogue is clear and intelligible throughout without any interference. Imaging is fantastic - especially during action sequences - as there is plenty of constant surround activity to make the show engaging and immersive. Levels are also spot on, so once you have it at a comfortable level you shouldn't need to monitor things any. About the only way the audio for this show could get better is if they started producing Atmos tracks - I know that's not likely to happen anytime soon, if ever, but a nerd can dream.

If there's ever been one bright spot with the Blu-ray releases of The Flash it's the bonus feature package. There are a ton of bonus feature content packed into this set allowing fans of the show plenty of behind the scenes access as well as some meaty deleted scenes. This package isn't as robust as previous seasons, but it's no slouch either. Considering the Netflix Marvel shows like Jessica Jones or Daredevil: The Complete Second Season doesn't offer any bonus features of any kind, this selection is a positive boon. My only complaint about this set is that it didn't feature the complete Invasion! storyline that crossed between Arrow, Legends of Tomorrow, and Supergirl. That would have been nice to see without having to purchase each individual season in order to enjoy the full special.

Borrowing Problems From the Future (HD 1:15) 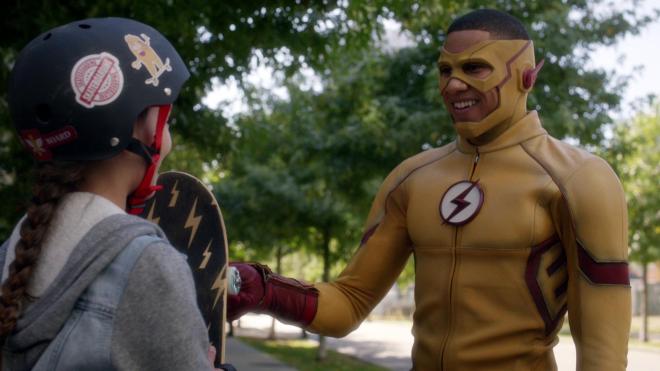 A Conversation with Andrew Kreisberg and Kevin Smith (HD 3:55)

At this point, you're either on team Flash or you're not. I for one am 100% on board with The Flash. No, not every episode is a winner and each season has suffered from an amount of bloat that comes from a 23-episode order. However, I'm not going to complain much because when the show is good, it's damn exciting and The Flash: The Complete Third Season delivers the goods. It's a welcome darker turn for the show and its characters while never forgetting to have a little fun. A couple of cameo appearances with Supergirl took care of that! Warner Bros. has once again done a hell of a great job bringing The Flash: The Complete Third Season to Blu-ray. The A/V presentation is top notch and a couple hours worth of bonus features should keep fans busy as they wait for season four to start up in a couple weeks. Needless to say, The Flash: The Complete Third Season is highly recommended.

Sale Price 16.96
List Price 29.98
Buy Now
3rd Party 7.07
In Stock.
See what people are saying about this story or others
See Comments in Forum
Previous Next
Pre-Orders
Tomorrow's latest releases