Triggered by a series of earthquakes on the West Coast of the United States, a massive tidal wave circles the globe and—in a prolonged and spectacular special effects sequence—wipes out New York City. Sidney Blackmer stars as a man who, separated from his family, must begin to rebuild civilization in the wake of the catastrophe. For decades, Deluge was a lost film of almost mythical status, until horror/sci-fi archivist Forrest J.

There are few greater joys for classic movie fans than learning of the rediscovery of a "lost" film. Back before motion pictures were considered an art form, not much care was taken to preserve them, and as a result, countless films fell through the cracks, vanishing from circulation and crumbling from decay. The 1933 end-of-the-world drama, 'Deluge,' was one such movie, but the discovery of a dubbed Italian print in the early 1980s gave film fans hope that one day the original American release might be found. And just last year, it was. Lobster Films has lovingly restored 'Deluge,' and thanks to Kino Lorber's Blu-ray release, this quirky, often fascinating rarity can be reexamined and enjoyed anew.

One of the first disaster movies to grace the silver screen, 'Deluge' predates such better known genre entries as 'The Last Days of Pompeii,' 'San Francisco,' 'In Old Chicago,' and 'The Hurricane' by a couple of years, and its special effects look strikingly primitive by comparison. Yet despite a shoestring budget and plenty of technical limitations, director Felix E. Feist manages to craft impressive and ambitious scenes depicting Mother Nature's violent wrath. Destroying New York City is no easy task, but Feist pulls out all the stops, employing earthquakes, tidal waves, and howling winds to create a dazzling cataclysmic spectacle. Sure, some of it is laughable, but it's impossible not to respect the vision and ingenuity of the film's creative team.

'Deluge' dives right into the action, opening just before disaster strikes. An unexplained meteorological phenomenon signals a doomsday scenario, and soon civilization begins to crumble, buckling under the weight of violent storms and massive seismic shifts. California collapses into the sea, and after a series of earthquakes, rising tides engulf New York City, erasing it from the map. Only a handful of hardy souls weather the carnage, one of whom is Martin Webster (Sidney Blackmer), who believes his wife Helen (Lois Wilson) and their two young  children have perished. Martin becomes a survivalist, stockpiling food, weapons, and supplies, and soon meets Claire (Peggy Shannon), one of the few women in the area, who's fleeing the clutches of two thugs. A bond develops between them as they try to forge a life amid the devastation. Meanwhile, a new town begins to sprout nearby, and the residents start enacting laws to keep anarchy at bay. Tensions mount, and soon Martin and Claire are sucked into the maelstrom, leading to new revelations and difficult choices.

Clocking in at a mere 66 minutes, 'Deluge' is as brisk as the destructive winds that flatten Martin's house. Feist favors action over nuance, often leaving his characters to fend for themselves. And because the apocalypse comprises the movie's first third, most of the story focuses on its aftermath and the rebirth of civilization. That's a lot of ground to cover in little more than an hour, so it's not surprising the plot often feels disjointed and rushed. But the themes of perseverance and rebirth hit home. Both 'Lord of the Flies' and the 2012 tsunami film 'The Impossible' come to mind while watching 'Deluge,' which helps it remain relevant despite its rather primitive presentation.

Even diehard classics fans might not remember Peggy Shannon (I had never heard of her before watching the film), but her beauty and sincerity serve 'Deluge' well. She's far from a great actress, but she's got presence and potential that sadly never would be realized. (Bad breaks, an abusive relationship, and alcoholism would send her burgeoning career into a tailspin and hasten her death from a heart attack eight years later at age 34.) Though his character may lack depth, Blackmer - who's perhaps best known for his final role as Ruth Gordon's husband in Roman Polanski's 'Rosemary's Baby' - attacks his part with appropriate vigor. Virile, resourceful, and relatable, he embodies the everyman thrust into extraordinary circumstances and forced to face myriad challenges.

'Deluge' was a box office failure when originally released, but today it's an intriguing curiosity that merits attention due to its rare nature, inventive (if primitive) special effects, and interesting doomsday perspective. As one of the first disaster films, it sets the stage for decades of destruction to come, and as a recently discovered lost film, it reminds us yet again just how precious our film heritage is. 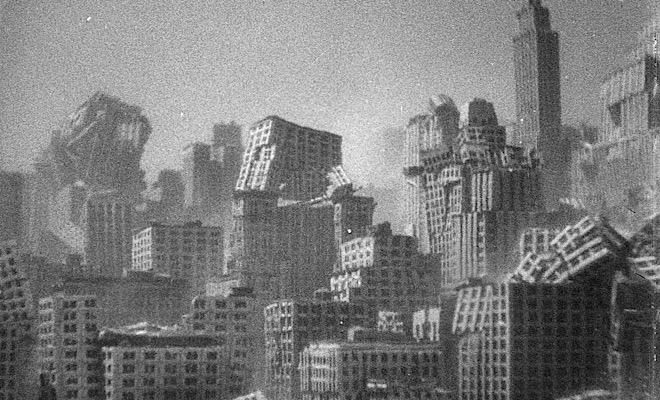 'Deluge' arrives on Blu-ray packaged in a standard case with reversible cover art. Video codec is 1080p/AVC MPEG-4 and audio is DTS-HD Master Audio 2.0 mono. Once the disc is inserted into the player, the static menu with music immediately pops up; no previews or promos precede it.

Expectations can't run very high for a film that was deemed "lost" for several decades, but Kino Lorber has managed to muster a darn good transfer of 'Deluge' - struck from a recent 2K restoration - that almost makes us forget its troubled past. If you're looking for clean, you won't find it here. The print is riddled with marks, scratches, vertical lines, missing frames, and features a couple of tears, but all that should be easily forgiven, as we're lucky the film still exists at all. Heavy grain afflicts several scenes, but several others look quite clear, and the numerous montage sequences flaunt a surprising amount of detail. Contrast is fair, but rich black levels lend the image necessary weight. Whites are crisp, shadow delineation is quite good, and decent gray scale variance adds depth and vibrancy to the picture. Flaws notwithstanding, the underlying image is quite watchable, and classics fans should be pleased with this admirable rendering of a rare film.

The DTS-HD Master Audio 2.0 mono track amazingly exhibits few deficiencies. Some hiss is noticeable, but no age-related pops and crackles are present. Sound quality is fairly anemic, but the crumbling buildings, howling winds, and crashing surf during the disaster sequence are clearly reproduced. Sonic accents like gunfire, fisticuffs, and shrieks are distinct, and though the music score lacks much presence and depth, its dramatic strains nicely underscore the action without overwhelming it. Some of the dialogue in the early part of the film is a bit difficult to comprehend, but once the destruction of New York City is complete, the conversations become clearer. This is hardly a stellar track (few early 1930s tracks are), but it certainly suffices, especially when considering the dilapidation of the source material.

A couple of noteworthy supplements enhance the appeal of this rare classic title.

Disaster fans, rejoice! The once lost 'Deluge' comes back with a vengeance on Blu-ray, and though this apocalyptic tale of destruction and renewal pales when compared to more sophisticated genre entries, it remains an intriguing specimen. The special effects may be laughable by today's lofty standards, but they're quite impressive for the period, and the preposterous story is distinguished by plenty of action, suspense, and romance. Kino Lorber's Blu-ray presentation honors the film's existing elements as best it can, and spices up the release with an informative audio commentary and a second full-length feature starring Peggy Shannon. Classic film fans who relish rarities will especially want to check out this forgotten relic, which despite a fair share of deficiencies earns a solid recommendation.

Sale Price 18.59
List Price 29.95
Buy Now
3rd Party 14.49
In Stock.
See what people are saying about this story or others
See Comments in Forum
Previous Next
Pre-Orders
Tomorrow's latest releases