Haunted by his turbulent past, Mad Max (Tom Hardy) believes the best way to survive is to wander alone. Nevertheless, he becomes swept up with a group fleeing across the Wasteland in a War Rig driven by an elite Imperator, Furiosa (Charlize Theron). They are escaping a Citadel tyrannized by the Immortan Joe (Hugh Keays-Byrne), from whom something irreplaceable has been taken. Enraged, the Warlord marshals all his gangs and pursues the rebels ruthlessly in the high-octane Road War that follows.

Thirty years after the last installment in the 'Mad Max' franchise, and another thirty-six since the first that started it all, George Miller returns to his apocalyptic vision of the future in the high-octane bombast that is 'Fury Road.' And like the films which preceded it, this fourth entry in the series is a spectacular display of humanity barely surviving on the brink of extinction. When all four features are watched in sequence, this is merely another glimpse of a society slowly reverting back to greedy, animalistic instincts — a twisted progression of devolution. In Miller's wretchedly dystopic yet action-packed nightmare, those base natures give rise to power-hungry megalomaniacs and madness. In the opening moments, Max Rockatansky (Tom Hardy), seen staring out into a lifeless desert abyss and munching on raw mutant lizard, announces that crazy is the new norm in a wasteland created by the careless pillaging of Earth's natural resources and atomic wars.

As if finally tired of doing family-friendly fare with tales that followed an optimistic pig and a dancing penguin, Miller opens this brilliantly spectacular motion picture with the loud sounds of engines revving. As soon as Max explains he exists somewhere between the dead and the living, the Australian-born filmmaker kicks it into high gear, tightly gripping the back of the audience's neck and doesn't let go until the last final minutes. For nearly two hours, Miller takes us on what could be the most insane road movie ever produced, once again setting the former MFP officer and widower in direct opposition to a lawless maniac. As in the previous films, our reluctant antihero has already given up hope of a new civilization, a lone scavenger driven purely by survival, and Hardy does a marvelous job stepping into the role that made Mel Gibson a worldwide star. He's now a wounded soul of very few words, on the verge of cracking, continuously haunted by visions of those he was unable save in the past. 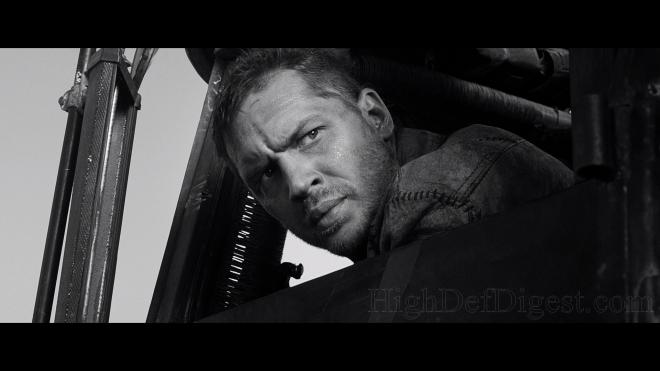 In a script Miller co-wrote with graphic novel writer Brendan McCarthy and Nico Lathouris, the plot follows Hardy's Max through the Australian outback, grudgingly assisting the tough-as-nails Imperator Furiosa (Charlize Theron in her best role in years) escape the tyrannical clutches of the messianic Immortan Joe (Hugh Keays-Byrne, best remembered as "Toecutter" from the 1979 original). Driving an armored tanker truck filled with water, gasoline and Joe's most prized possessions — five young women forced into breeding his children — the disease-ridden leader chases after them with his army of white-painted War Boys and with the aid of his equally insane brothers' war parties from Gas Town and Bullet Farm. What ensues is basically an extended scene of the road battles from 'Road Warrior' and 'Beyond Thunderdome,' and Miller saturates the screen with one breathtaking action sequence after grippingly stunning action sequence, each leaving a memorable impression.

It's visually striking choreography of live-action stunts seamlessly blended with CG wizardry, and it's sometimes difficult to tell the difference where one begins and the other ends. As though Miller were directly commenting on the current state of action movies, he demonstrates how to properly make an action film while harkening back to the days of good-ole fashioned practical special effects. Carefully working with cinematographer John Seale, Miller uses the full frame in dazzling fashion to immerse his viewers. He composes beautiful extreme wide shots to give a majestic sense of space and distance, and then spruces things up with medium shots and close-ups to heighten the suspense. Each one allows for the action to play out on the screen without the confusing rapid-fire edit cuts and lingers on the many expressive faces of the cast. With the highly-talented production designer Colin Gibson constructing the Frankenstein-like vehicles — one porcupine-like gang of marauders awesomely alluding to Peter Weir's 'The Cars that Ate Paris' — Miller succeeds on every level, delighting the senses as so few have in years. 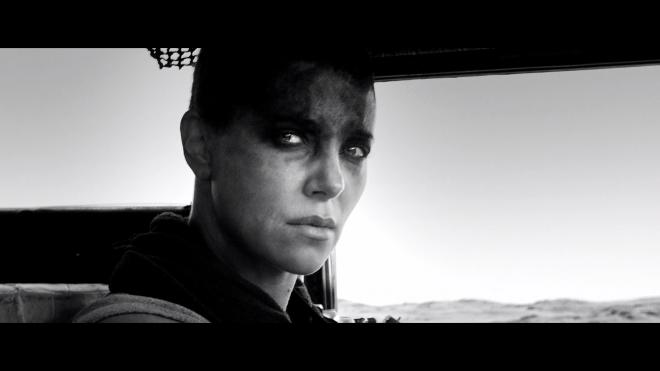 Like the previous installments being inspired by current events, this fourth entry also boldly speaks to contemporary concerns about individuality and moral depravity, and Miller explores these ideas by alerting our eyes to a new action hero for the 21st Century, one we've been sorely missing for the last couple decades. Max may be understood as the plot's central figure, but this is actually Furiosa's show all the way, and Theron is a beautifully furious heroine that can tussle with any man. The film's title even suggests this is her journey, and Max is simply tagging along for the ride. Immortan Joe and his two brothers wield their oppressive power over the wasteland like a family dynasty with corporate reign over life-given necessities like water, implicitly referred to as "Aqua Cola." They also rule over everyone with an antiquated belief system that has young soldiers like Nux (Nicholas Hoult) welcome death with the promise of reward in the afterlife and view women as property without a say or right over their own bodies. Lead by Rosie Huntington-Whiteley and Zoë Kravitz, the five wives chant, "We are not things! We are not things!"

Sequels are traditionally seen as bigger and louder extensions of their predecessors, and 'Fury Road' is ultimately no different, taking the insanity that has been building over the course of three movies to gloriously thrilling heights. However, there is an ingenious theme brewing beneath all the bedlam, as if deliberately contradicting Jean Baudrillard's sentiment of a modernity with more information but less meaning. The film is a chaotic, anarchistic spectacle of punk-metal havoc that on the surface appears like a pandemonium of disorder, feeling like random ideas that were conjured on the spot, but it is a surprisingly articulate, straightforward tale that keeps audiences on the edge of their seat from start to finish. In spite of it being a sequel to a larger story, the production somehow feels wholly original because the visuals and stunts are dementedly elaborate, feeding to many of our childhood fantasies of playing with Hot Wheels toys. With so much in its favor, 'Mad Max: Fury Road' already steals my vote for the best action movie, if not the most satisfying film, of the year. Perhaps, even the best action movie of the decade!

'Fury Road' goes ballistic with a brand new 1080p/AVC MPEG-4 encode, created from a fresh remaster that was color graded to achieve the proper grayscale. In all honesty, watching the movie in black and white is really nothing more than a gimmick, especially since the picture quality of previous Blu-ray editions is a gorgeous sight to behold, awash in a sumptuous array of colors. Thankfully, the video presentation turns out to be a wonderful ride to Valhalla, standing gloriously next to the Immortan and feasting with the heroes of our time!

The spellbinding, expert camerawork of George Miller and cinematographer John Seale looks absolutely beautiful and other-worldly. Black levels are true and inky rich, providing the image with a great sense of depth, while shadow delineation is strong throughout. Contrast is pitch-perfect, displaying crisper and slightly brighter whites that never bloom or overpower the rest of the picture. The audience can better take in the landscape and see far into the wasteland. Only areas that don't really gain much from the change are the massive dust storm and the nighttime sequences, which frankly, look far more satisfying with the dark bluish tint.

However, the 2.40:1 image benefits most in terms of clarity and definition. Shockingly, the presentation seems more detailed and razor-sharp in most scenes so that viewers can plainly make out every aspect of each insanely designed car. Most impressive of all are the facial complexions exposing the most miniscule blemish, the tiniest bead of sweat and every pore in the faces. Close-ups of Immortan Joe, Furiosa and Max, in particular, standout by revealing every fine line and wrinkle while the unique rock formations show distinct lines.

Unfortunately, the video reveals some very mild and largely negligible banding in a couple scenes, but all in all, the craziest road movie ever looks fantastic in black and white.

Miller and his crew rev their engines and roar onto the screen with the same superb, demo-quality Dolby Atmos soundtrack that we heard on previous Blu-ray releases.

Right from the instant when the Warner Bros. logo is shown, the room fills with the sound of supped up motors spreading across the entire soundstage, immediately establishing a broad sense of space. When the action starts, it explodes with a huge wall of sound, showcasing excellent movement between all three front channels and the two front heights. This creates an awesome half-dome effect that feels as though the insanity was reaching over and above. Amid the mayhem, vocals remain distinct and precise so that we can hear every emotional conversation and even Tom Hardy's muddled lines. The low-end is definitely one of the design's highlights, packing serious oomph and power to every explosion, gunshot and gas-guzzling engine that growls across the screen, digging deep into the lower depths on a few occasions (Bass chart).

It seems as though the rears are continuously active although, of course, during the softer, intimate conversations, they don't exactly play a significant role. Nevertheless, subtle atmospherics are still present to provide a sense of space and maintain an amusingly immersive soundfield. The best moments, without a doubt, are the astounding action sequences, utilizing every speaker in the room to stunning effect. Cars and motorcycles screech overhead, flawlessly panning from behind, above and to the front without a hitch. When cars explode, debris flies everywhere as though pieces of metal were raining down into the living room. The bodies of War Boys screaming to their deaths also move smoothly through the overhead speakers and land behind the listening area, creating an enveloping dome-like effect that really pulls viewers into the action. From start to finish, much like the film itself, the Dolby Atmos is incessant and relentless, delivering a remarkable 360° soundscape fans will absolutely love and will probably repeatedly listen to.

The same collection of supplements are ported to this edition but only available on the regular Blu-ray disc.

Thirty years after the last installment in the 'Mad Max' franchise, and another thirty-six since the first that started it all, George Miller returns to his apocalyptic vision of the future with the high-octane 'Fury Road.' Starring Tom Hardy and Charlize Theron, the film is a chaotic, anarchistic spectacle of punk-metal havoc that on the surface appears like a pandemonium of disorder, feeling like random ideas that were conjured on the spot, but it is a surprisingly articulate, straightforward tale that keeps audiences on the edge of their seat from start to finish. The new "Black & Chrome" Blu-ray arrives with an awesome black & white video and the same reference audio presentation. Supplements are sadly on the light side, but the overall package is nonetheless recommended and a must own for devoted fans of the franchise.

Sale Price 19.99
List Price 29.98
Buy Now
3rd Party 13.03
In Stock.
See what people are saying about this story or others
See Comments in Forum
Previous Next
Pre-Orders
Tomorrow's latest releases