A wandering supernatural felines adventures provide the linking story for Stephen King's Cat's Eye-- a dead-on thrillogy scripted by King and directed by Lewis Teague (Cujo). The staff at Quitters Inc. promises to help nicotine fiend Dick Morrison (James Woods) kick the habit. Next, a luckless gambler (Robert Hays) is forced into a bet involving a stroll around a building on the five-inch ledge encircling the 30th floor. Finally, our wayfarer kitty rescues a schoolgirl (Drew Barrymore) from a vile, doll-sized troll.

Although I've seen 'Cat's Eye' many times over the years since its theatrical release, it's been over a decade since the last I saw it. And I've completely forgotten how much fun it is. From a script by Stephen King paying homage to the E.C. horror comics of his youth, similar to what he did with 'Creepshow' a couple years earlier, the horror anthology is crowded with the snarky, delightfully demented personalities who take great pleasure in tormenting others with sneering sarcasm while forcing them into some twisted game of death. You know, the sort only King can concoct in his gleefully deranged imagination. The back and forth between the crazed scumbags and their intended victims have always been a satisfying highlight of King's best film adaptations. And in this small collection of terror tales, two of which were based on his short stories while the third is original to the production, come with a few more jabs to tickle the funny bones of the most loyal King fans. Some are obvious allusions to adaptations he personally liked while others are subtle, blink-and-you'll-miss-it gags.

The jovial opening sets the tone for the rest of the production — an oddly upbeat, lighthearted type of horror flick not really meant to scare as much as be amused by dark tales of comeuppance. A green-eyed tabby escapes the rabbid clutches of a bedraggled St. Bernard and is nearly run over by a cherry red '58 Plymouth Fury. Aside from being obvious yet funny references to two adaptations King was happy with, the lack of four particular films ('Carrie,' 'The Shining,' 'Children of the Corn' and 'Firestarter') is telling of his feelings of them, ranging from lukewarm to downright despising. Later, when the cat ends up in the hands of the somewhat sadistic clinic counselor Dr. Vinnie Donatti (Alan King), we're given our first tale in cigarette smoker Dick Morrison (James Woods) accepting the dangerously experimental methods for quitting his addiction. On his first night without smoking, a fidgeting, agitated Morrison is watching David Cronenberg's 'The Dead Zone' and yells his disapproval at the screen. This is funny because the criticism is meant sarcastically since King has admitted the film's narrative was an improvement over his book. 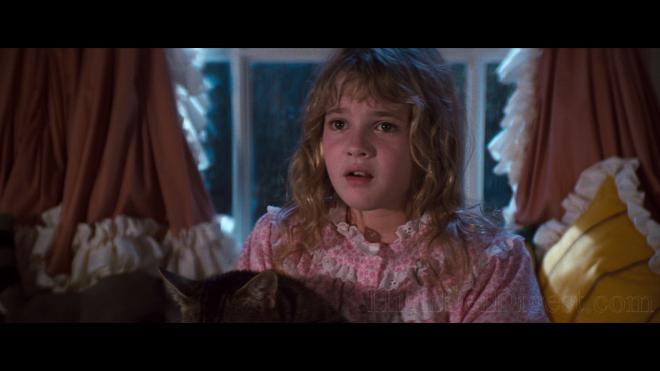 For the rest of the story, Morrison's struggle with his addiction runs its course like a suspense thriller, resulting from threats and the uneasy thought of always being watched. It's really more akin to a 'Twilight Zone' episode with the inevitable twist right before Rod Sterling delivers his closing monologue. It's not a bad segment, but the next one with Robert Hays and Kenneth McMillan is better and arguably the best of the three. While the same Tabby is shown simply watching from the sidelines, Hays's Johnny Norris is forced by McMillan's crime boss Cressner to walk the ledge of a hotel several stories high. Director Lewis Teague ('Cujo,' 'The Jewel of the Nile') does an excellent job at generating the long walk into a nerve-wracking experience, sure to twist a few sensitive stomachs. As if that weren't enough, Cressner shows up several times to taunt and humiliate Norris with comically twisted pranks meant to push the probability of the adulterer falling to his death. The stupid pigeon only makes matters worse. And as before, Teague and King can't help throwing a couple rib-tickling jabs, like Cressner's promise alluding to a movie starring Hays and the Penthouse magazine being the same issue where this story was originally published.

Much like Hay's Norris, the poor kitty barely escapes with its nine lives still intact, seizing the right moment to run out the door and travel southbound for hundreds of miles. It's determined to find a little girl that, for some unexplained reason, haunts the cat with warnings and frantically urging it to hurry before some mysterious creature catches her. Drew Barrymore plays Amanda, among other roles throughout, with an adorably cute and innocent outlook, immediately believing the cat, which she names General, was destined to be hers. Her parents have other concerns about adopting a feral feline, more so grumpy sourpuss mom (Candy Clark) but supportive, caring dad (James Naughton) doesn't see the harm. Of course, we're meant to side with Amanda while hissing and booing mom because it turns out General was fated to battle a vicious little troll living in the walls of Amanda's room. It's a darkly quirky tale in the tradition of an E.C. horror comic book that's just fun to watch with a couple more elbow nudges in mom reading Pet Sematary and a hilarious death scene to the tune of The Police's "Every Breath You Take." It's a good finish to an altogether amusing flick.

Warner Home Entertainment brings 'Cat's Eye' to Blu-ray on a Region Free, BD50 disc housed inside a blue, eco-cutout case. At startup, viewers are taken to a static menu with generic options.

The horror anthology tells its tales of terror with a nice looking 1080p/AVC MPEG-4 encode that shows the source used has aged well but could still benefit greatly from a full restoration. Much of the picture reveals sharp details in the 80s outfits and the various background objects furnishing a character's house and the business offices. In some scenes, viewers can practically count the bricks and windows of buildings while individual leaves are distinct from a distance. However, the transfer also comes with its share of softer, poorly resolved sequences, likely related to the condition and age of the source, but it's still an upgrade over previous editions.

Presented in a 2.40:1 aspect ratio, contrast is well balanced with crisp, clean whites throughout, but it occasionally runs hots, making highlights bloom in daylight exteriors and the sky look like a giant white blob. Nighttime sequences, on the other hand, are the presentation's overall best aspect with excellent, true blacks, providing the image with appreciable depth, and rich, deep shadows without sacrificing the finer details. Richly saturated primaries give the picture a lively, energetic appeal while secondary hues are accurately rendered and varied.

The silly but fun horror feature arrives equipped with an excellent DTS-HD MA stereo soundtrack, making it another marked improvement over its DVD counterpart.

Dialogue is well-prioritized and distinct in the center from beginning to end while the rest of the front soundstage feels broad and expansive. Off-screen activity moves to the left and right channels convincingly and discretely, providing the movie with a great sense of presence and space. The mid-range is dynamic and surprisingly extensive, exhibiting fantastic clarity and detailing during the loudest sequences, and low bass delivers a palpable weight to the few bits of action and music.

The lossless mix also lends itself terrifically to the receiver's DSU function with the music and several of those aforementioned effects effortlessly spreading into the front heights, creating an engaging half-dome wall of sound.

Written by Stephen King, 'Cat's Eye' is a horror anthology in the tradition of E.C. horror comics, similar to King's 'Creepshow' only without the gore or much of the horror. In fact, we could say the three tales of terror are more akin to a 'Twilight Zone' or 'Night Gallery' collection. Either way, director Lewis Teague maintains an oddly jovial and upbeat quality to each story, making for an amusing watch. The Blu-ray arrives with a great-looking video transfer and slightly better audio presentation, but sorely lacking supplements makes the overall package recommended for fans only while others might give it a rent first.

Sale Price 9.99
List Price 14.97
Buy Now
3rd Party 19.99
In Stock.
See what people are saying about this story or others
See Comments in Forum
Previous Next
Pre-Orders
Tomorrow's latest releases