Geeky student Arnie Cunningham falls for Christine, a rusty 1958 Plymouth Fury, and becomes obsessed with restoring the classic automobile to her former glory. But as the car changes, so does Arnie, and his newfound confidence turns to arrogance behind the wheel of his exotic beauty. Arnie's girlfriend Leigh and best friend Dennis reach out to him, only to be met by a Fury like no other.

At the heart of 'Christine,' the 1983 cult horror favorite based on the Stephen King novel, we find a love story. It's a rather familiar and well-known tragic tale of two lonely souls finding one another at the right, opportune time. Just when they each feel at their lowest and most vulnerable, forsaken by the cruelty of the world, the cosmos perfectly align in order to bring this pair of destined lovers together. And like any typical love story, their love-at-first-sight "meet-cute" is a contrived happenstance that should feel fortuitous, a chance encounter that could have played differently if prior events hadn't placed each other on the proper road for the two to meet. Of course, this story adds one significant twist to the archetypal formula; King's plot, with minor alterations by screenwriter Bill Phillips, is the forbidden love of a boy and his car.

The boy is Arnold Cunningham (Keith Gordon) — about as sweet, innocent and All-American as a name could ever possibly be. He's the stereotypical nerd, a clumsy buffoon with black, thick-rimmed glasses who can't seem to carry a garbage bag without spilling the contents all over the driveway or incapable of even opening his school locker. Mousy, timid and easily frightened, he's the sort of character commonly seen in the background of most high school based movies, the one always being picked on by the popular kids. Not much has changed here, except he's been brought to the forefront as the lead, and Gordon does a splendid job as the nervous, cowardly type who never has any luck with the girls, carrying the entire film with a charismatic presence. That fascination changes as the narrative progresses and Arnie grows darker, yet Gordon remains just as captivating and interesting.

The car is a fiery red 1958 Plymouth Fury named "Christine" by its fragile-looking seller (Roberts Blossom). We're told she's only had one owner since the first day she rolled off the assembly line, but the man had suffered a string of fatal tragedies since the vehicle came into his life. A major difference between the original book and John Carpenter's retelling of it is the car's backstory. Whereas King gives a possible reason for it being possessed, Carpenter leaves the origins of Christine's evilness a mystery. She was simply born that way. In fact, the film opens on the day of her manufacturing, slowly moving along the assembly line behind other similar models while George Thorogood's "Bad to the Bone" plays overhead. Only, she stands out as the lone shiny red beauty. She's also the type of vehicle that demands respect, crushing the hand of one man for looking under her hood and chassis without permission and killing another for dropping cigar ashes all over her new leather interior. 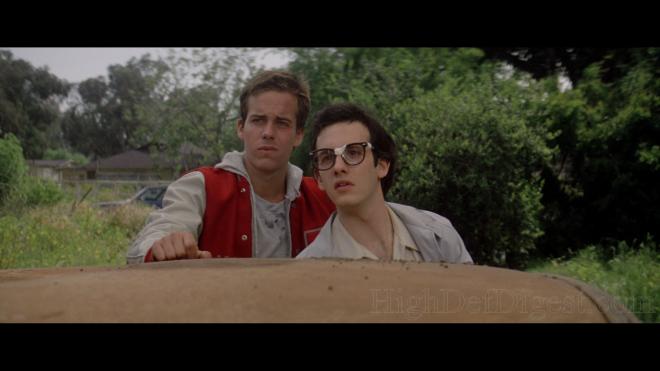 It's an amusing start for a unique supernatural thriller that establishes the car with a menacing personality and a sense of her own independence, but her distinctive temperament doesn't take away from her need to be loved and appreciated. And the fates are in her favor, uniting her with Arnie twenty years later when the two are feeling the least respected and valued. Arnie is coming off the worst first day ever as a high school senior, bullied by the switchblade-wielding Buddy Repperton (William Ostrander) and his gang of hooligans, leading to their expulsion. Christine has also been having a bad day, looking a derelict piece of forgotten junk in the middle of an overgrown lawn, but Arnie notices her and sees her potential, purchasing the car on the spot in spite of his best friend's (John Stockwell) objections. It's love at first sight with the two taking an immediate liking to each other.

The horror of 'Christine' begins soon after. It's not necessarily the sort that delivers chills down the spine as much as it is able to successfully entertain with an admittedly silly supernatural concept supplemented by psychological horror elements. As Arnie restores Christine back to her former glory, he slowly transforms to the surprise of everyone, especially his parents and Dennis (Stockwell), from the twitchy, cowardly nerd to a cheeky, intimidating hood. Meanwhile, Christine grows possessive and protective of her new owner, jealous of Arnie's girlfriend Leigh (Alexandra Paul) and murdering those intending Arnie harm, which attracts the attention of Detective Junkins (Harry Dean Stanton). Although the editing gives the narrative a sometimes distracting episodic feel, Carpenter maintains Arnie's dark progression well-paced and wickedly titillating while creatively making Christine a mischievous monster, from the throaty rumbling of her engine to the cleverly suitable rock tunes which act as the voice of her intentions.

Sony Pictures Home Entertainment lets loose 'Christine' to run wild on Blu-ray with a Region Free, BD50 disc housed inside a blue, eco-keepcase with a code for an UltraViolet Digital Copy and glossy slipcover. At startup, viewers are taken directly to a static menu screen with the usual options and music.

'Christine' is brought back to life and fully restored as if fresh off the assembly line, its polished paint job glistening in the light and its chrome trim sparkling in the sun's rays. The 1080p/AVC MPEG-4 encode is a significant upgrade over its DVD counterpart and the best the movie has ever looked. (Sadly, we don't have the Twilight Time release at hand for comparison.)

Immediately, the film comes to life right from the start, full of bright, energetic colors. Granted, the first few minutes don't look like much, seeming rather soft and dreamy with a brownish, amber palette. But that's intentional and specifically shot on a different stock to give the opening sequence an antiquated feel because it's set in 1957. Afterwards, the toreador red of Christine and the plain red on letterman jackets appear vivid and brazen while greens and blues bring the rest of the picture to life.

Presented in a 2.40:1 aspect ratio, the image is upbeat and ironically spirited with spot-on contrast that provides excellent visibility in the far distance. The 32-year-old film comes with outstanding definition for a majority of the runtime while awash with an ultra-fine layer of natural grain throughout but seems more apparent and slightly denser during some indoor scenes, which is natural. The lettering on signs and books are nicely detailed while the fine lines along the possessed car's interior and exterior are razor-sharp, and facial complexions are often revealing.

A few moments worth mentioning are poorly-resolved and blurry, but easily forgiven due to age and the condition of the source. On the other hand, there appear to some instances of the application of noise reduction, which tend to make faces look a bit waxy, but thankfully, it's not to the point of being objectionable or completely ruining the movie's enjoyment. Blacks are true and accurate for the most part, providing notable depth, but shadows tend to come off a tad strong in some spots, obscuring the finer details in the darkest portions.

The cult horror favorite roars onto the Blu-ray superhighway with all cylinders firing thanks to an excellent DTS-HD Master Audio soundtrack. Although presented in surround sound, the presentation nicely maintains a stereo design that's more faithful to the original elements and very much appreciated.

The front soundstage feels terrifically wide and broad with excellent channel separation. Cars speed across the screen smoothly from left to right and off-screen, creating an awesome sense of space and providing the action fantastic presence. Quieter moments keep things engaging as discrete background activity continuously employ all three channels. Birds are distinctly heard chirping in the distance while the leaves of trees rustle in the wind overhead.

Dynamic range is surprisingly extensive with sharp detailing and separation in the higher frequencies, maintaining notable clarity during the movie's loudest segments. The sometimes nerve-wracking crunch of metal, whether it's crashing or expanding back into place, is intricate and complex without a hint of distortion. The score by John Carpenter and Alan Howarth also enjoys the upgrade into high-def, taking full of advantage of the extra breathing room by delivering every note and instrument with outstanding fidelity, precision and warmth. Low bass adds a great rumbling, palpable effect to the Christine's engine, giving her a scary, menacing weight. With intelligible, well-prioritized vocals, this lossless mix delivers a fantastic joy ride of a beloved horror tale.

At the heart of 'Christine,' the 1983 cult horror favorite based on the Stephen King novel and directed by horror filmmaker legend John Carpenter, is the forbidden love story of a boy and his car. Although the narrative feels episodic, Carpenter does an excellent job of maintaining Arnie's dark progression and Christine's evil murdering rage into devilishly fun ride. The Blu-ray arrives with an excellent video and audio presentation that will surely please fans. Supplements are the same from the 2004 DVD, but it's a nice collection, making this a worthy overall package of a cult horror favorite.

Sale Price 9.96
List Price 19.99
Buy Now
3rd Party 8.49
In Stock.
See what people are saying about this story or others
See Comments in Forum
Previous Next
Pre-Orders
Tomorrow's latest releases