Return of the Living Dead 3

In Return of the Living Dead: Part II, the chemical Trioxin turned people into flesh-eating zombies. Now, the government is trying to control these unstoppable cannibalistic killers in Return of the Living Dead 3. When a young man uses the chemical to bring his girlfriend back to life after a motorcycle accident, she is driven to eat the only thing that will nourish her...human brains! She tries to stop her own feeding frenzy but a chain reaction has already begun, as hordes of undead are unleashed from their graves!

Sometimes, I enjoy reading the anonymous comments and revisions made to a movie's Wikipedia page because they can occasionally offer a different and unique insight to a person's perception of said movie, which ironically can often be the reason for never trusting such websites in the first place. For the page dedicated to 'Return of the Living Dead 3,' the movie is described as a "romantic horror film," which paradoxically is funnier than anything seen in this production. Part of what makes that description funny is that there is nothing romantic in a plot that doesn't differ all that much from its previous two predecessors, except that filmmakers abandoned the comedic tone set by those two for a more serious take. If this second sequel to the intentionally silly zombie series is considered romantic, then first and second installments should be relabeled "romantic comedies." Military action! Toxic chemicals which reanimate the dead! Oozing icky gore and pandemonium! It's the perfect date night flick.

Adding to the humor of associating any aspect of this production to romance is director Brian Yuzna's attempt for a straightforward horror feature inadvertently resulting in a silly comedy. It's the sort of guilty pleasure — and it is, given that I still get a kick out of it — many tend to justify as so bad it's good. And I must admit, I understanding exactly what that person was thinking when typing the word "romantic" on the movie's page. Yuzna, who's arguably better known for serving as producer to 'Re-Animator,' 'From Beyond' and 'Honey, I Shrunk the Kids,' makes the star-crossed romance of Curt (J. Trevor Edmond) and Julie (Melinda Clarke) as the central plot. After dying from a motorcycle accident, a grieving Curt breaks into the military base where his father (Kent McCord) has been experimenting with the Trioxin gas to revive the grunge corpse of Julie. As the two deal with her addictive desire to munch on some tasty brains, the pair explore the kinkier side of their relationship while ignoring the elephant in the room: Does making-out with a conscious but still very much dead Julie make Curt a necrophiliac? 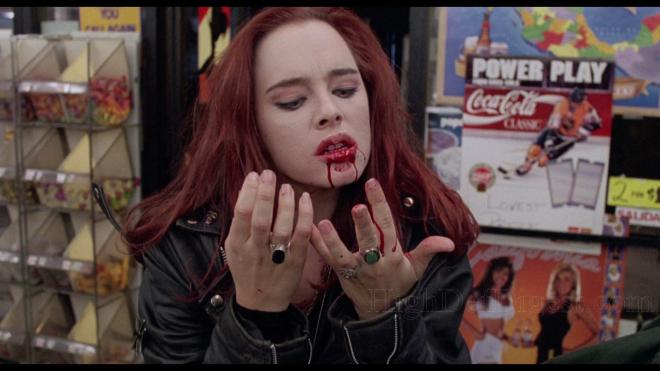 Perhaps, the movie would be less (unintentionally) goofy and viewed a more credible romance if not for the story's wackier, more histrionic areas meant as deadly serious drama. Clarke does reasonably well portraying Julie's hunger for flesh as an addiction or suffering withdrawal pains, which she tries to remedy by masochistically cutting herself and extensive self-inflicted body modification. Although at times gruesome and gory, the idea is interesting and worthwhile in the hands of better filmmakers. But the possibilities are undermined by the boyfriend's hysterics and delusional fantasies of a happy conclusion to the violent mayhem he created. Plummeting the premise even further into complete daffy hysteria is a quartet of gang members chasing after our doomed couple because Julie had a hankering for some spicy Mexican food. And honestly, these hardened street thugs provide little consequence to the overall movie or Julie's plight, serving as generic fodder and a source of urgency to move along the plot, which doesn't work.

However, if there's any legitimate reason for watching — or coming close to recommending — 'Return of the Living Dead 3,' it's in the hilarious notion of seeing zombie cholos (slang for Latino gang members). I can't think of any other horror flick that features tough gangsters as the walking dead, one of which walks around with his spine exposed! (Cholos, however, are already equipped and read for the zombie apocalypse!) It's total absurdity and could never be taken serious. But that doesn't stop Yuzna and company from trying. The movie's highlight comes with Julie transforming — or better yet, disfiguring — herself into a more ruthless killing machine. A rock tied to one hand for smashing heads, a knife protruding from the palm of the other for stabbing, sharp wires bulging from under her fingernails for tearing apart the flesh. As if unable to figure out a more satisfying ending, the story does a complete 360°, finishing back where it all started. And so, the moral of the story, assuming there is one, is that young love triumphs and conquers all, even in the reanimated dead?

Lionsgate Home Entertainment brings 'Return of the Living Dead 3' to Blu-ray as a Collector's Series under the distributor's Vestron Video line. The Region A locked, BD50 disc is housed inside a blue, eco-cutout case with a glossy slipcover. At startup, the disc goes straight to a static menu screen with a photo of the cover art and music playing in the background.

The dead return to life on Blu-ray with a strong AVC MPEG-4 encode that only offers a marginal improvement over its standard def counterpart. Much of this is likely due to the condition of the source, looking softer than other titles from the same period with a couple noticeably blurry sequences.

However, fine lines and objects are pretty distinct and visible in the background with sharp detailing in the clothing, the bodies of the walking dead and the walls of the army facility and the sewer hideout. Primaries are fairly bright and cleanly rendered, but secondary hues are somewhat lackluster. Although facial complexions can be revealing during close-ups, faces appear pale and sometimes sickly, making the living look almost dead in a few areas. The 1080p video displays good contrast levels, but much of the picture is nonetheless a little faded and flat. Likewise, blacks are deep and true in several spots, but they also tend to be slightly dull and murky while average shadow delineation. Overall, with a thin layer of natural grain, the 1.85:1 image makes a decent upgrade for the most loyal of fans.

Much like the video, the DTS-HD Master Audio stereo soundtrack is good, but not really a massive jump from previous home releases.

Compared to the DVD, the lossless mix is noticeably cleaner with slightly better clarity of background activity and appreciable balance. The mid-range also exhibits better detailing with distinct, precise dialogue reproduction. Low bass offers a bit more oomph to the music and action, but it's not by much, making much of the design seem pretty lacking. As for the rest of the track, various Foley effects, and occasionally even voices, tend to echo in the oddest areas and placement is distractingly misplaced. The overall design is, frankly, weak and somewhat limited, generating a mostly uniform soundstage that feels like a flat line across the screen. There are many instances of hissing, some popping in the background and very mild distortion in the loudest segments.

The Blu-ray edition arrives with a new set of supplements along with others from the DVD.

As the third installment to the silly zombie franchise, 'Return of the Living Dead 3' does away with the comedic tone of its predecessors in favor of a more straightforward horror flick with a good deal of gore. The result is an unintentionally hilarious tale of star-crossed lovers literally running to stay alive while one struggles with her addiction for human brains. The Blu-ray from Vestron Video arrives with a noticeable but still small improvement over its DVD counterpart. But with a new assortment of supplements made for this collector's edition, the overall package is quite tempting for fans and cult enthusiasts.