To Live and Die in L.A.: Collector's Edition

When a notorious, highly sophisticated counterfeiter murders his partner, Secret Service agent Richard Chance (William Petersen) launches a furious vendetta to capture the man responsible. But master counterfeiter Rick Masters (Willem Dafoe) is always just one step ahead of Chance in William Friedkin's thrilling, suspenseful crime drama. With violent shoot-outs and a turbulent chase scene reminiscent of Friedkin's own The French Connection, To Live and Die in L.A. broke with tradition by making the ostensible hero as morally reprehensible as the villain he pursues. Clashing with bureaucratic obstacles, Chance is forced to break the rules in order to procure cash for a sting operation, but the risks he takes snowball into an avalanche of violence and moral repercussions, leading to a morally ambiguous cul-de-sac from which there may be no return.

After the huge success and acclaim of his back-to-back duo of 'The French Connection' and 'The Exorcist', William Friedkin's career took a turn for the worse in the mid 1970s. His ambitious, big budget 'Sorcerer' (a remake of French classic 'The Wages of Fear') was drubbed by critics and ignored by audiences at the time. (The film later experienced a critical re-evaluation, however.) That was followed by a string of commercial disappointments such as 'The Brink's Job' and 'Deal of the Century'. By 1985, the director was in desperate need of a hit. Inspired by the pop culture phenomenon that 'Miami Vice' had stirred on television, Friedkin decided to cash in on some of his 'French Connection' cred with a new high octane crime thriller, 'To Live and Die in L.A.'. Although reviews were mixed, the film was a box office hit and has aged very well over the years.

Between this movie and 'Manhunter', William Petersen really seemed on the verge of becoming a big star in the 1980s. For whatever reason, that didn't pan out until his run on 'CSI' starting in 2000. In 'To Live and Die in L.A.', Petersen stars as Richard Chance, a Secret Service agent on the trail of nefarious counterfeiter Eric Masters (a very young Willem Dafoe). Chance is a hothead and an adrenaline junkie, driven to obsession after Masters has his partner killed. When he and new partner John Vukovich (John Pankow, later Cousin Ira in 'Mad About You') can't requisition suitable funds for a sting operation, Chance formulates a new, ethically dubious plan to raise the money. It doesn't exactly work out as well as he hoped. Events soon spiral wildly out of control as a result.

Some of its less kind critics accused 'To Live and Die in L.A.' of being little more than a big screen 'Miami Vice' knockoff with the sex and violence cranked up to R-rated levels. There's some truth in that. But, frankly, that's very much part of its appeal. The film is a slick, flashy thriller with a dynamic visual style cued directly from 'Vice' and from MTV (back when it was still culturally relevant). As he did in 'The French Connection', Friedkin plows through the plot with propulsive, kinetic energy. The theme song and score by New Wave band Wang Chung may be overused and repetitive, but I'll be damned if those tracks aren't still effective and exciting all these years later. The movie has nudity and gory violence, and plenty of top-notch action.

Yet the picture is more than just an exercise in empty stylistics. It actually has a very strong, tightly-plotted script rich with moral complexity. The characters are all well-realized, and the performances are excellent. In addition to Petersen, Pankow and Dafoe, the cast features very good supporting turns from John Turturro and Dean Stockwell. Friedkin even breaks the rules of the genre with some shocking plot twists that are still quite ballsy and uncompromising. 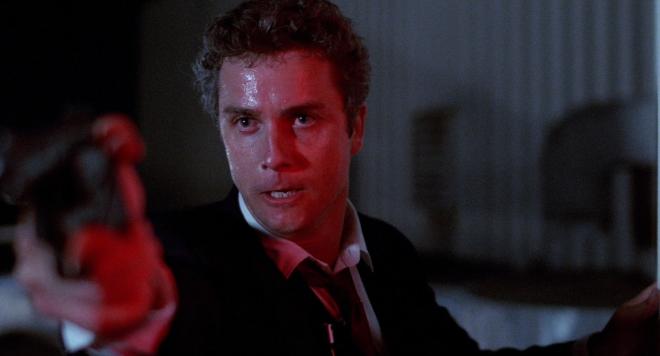 Some younger viewers may watch a movie like 'To Live and Die in L.A.' and call it "dated" because the fashions, music and filmmaking style are so rooted in the 1980s. That complaint doesn't hold much water for me. This is a movie set in a very specific time and place. Its style is appropriate to that setting. The film has endured as a crackerjack thriller with some terrific action, an excellent screenplay, and a legendary car chase veering the wrong way down the L.A. freeway at top speeds. With that frankly insane action sequence, Friedkin even tops his own famous work in 'The French Connection'. It's amazing.

Unfortunately, William Friedkin's career comeback was short-lived. Although 'To Live and Die in L.A.' was a success, the director went on to make some truly terrible movies like 'The Guardian' (the one about the evil tree, not the Coast Guard picture with Kevin Costner, which isn't so great either) and 'Jade'. Later, he lost his marbles a bit and wasted time desecrating his old films by tinting them goofy colors. Arguments can be made that some of his late-career pictures like 'Rules of Engagement' or 'Bug' are halfway decent, and his most recent film, 2011's 'Killer Joe', was fairly acclaimed if little seen. Regardless, 'To Live and Die in L.A.' still feels like the last significant hurrah of a major filmmaking talent just before his regrettable burnout.

'To Live and Die in L.A.' was first released on Blu-ray in 2010 by MGM Home Entertainment. At the time, that disc had a respectable video transfer, though the Blu-ray itself was not authored with any bonus features beyond a trailer. (The other supplements were all found on a DVD that dated back to 2003.) This year, Shout! Factory has licensed the title in order to reissue it under the Shout Select line.

The new Collector's Edition contains just a single Blu-ray disc (no DVD included) that comes packaged in a standard keepcase with a slipcover and reversible cover art. Unlike many recent Shout! Factory and Scream Factory releases, the new artwork (a watercolor impression of Los Angeles that's duplicated on the slipcover and the front side of the case insert) is actually pretty attractive and suits the content of the film well. Nonetheless, if you don't care for it, the flipside of the insert has the movie's traditional poster art.

Once you load the disc, the main menu screen plays only a brief segment of the film's theme song before cutting it short and restarting in a quick repeat loop, which is a little annoying.

For an MGM catalog title dumped on the market with no particular fanfare (and especially for a William Friedkin film released in the immediate aftermath of his 'French Connection' recoloring debacle), the 2010 Blu-ray edition of 'To Live and Die in L.A.' looked surprisingly decent and is still pretty watchable today. Nonetheless, Shout! Factory has put in the effort to remaster the movie from a new 4k scan of the film negative, supervised by the director. Thankfully, Friedkin eventually got over his "pastel" madness and has not imposed any wacky color changes to this movie. I can't be certain that all of the colors are really accurate to the film's 1985 theatrical prints, but most of them look appropriate. Even those I find a little questionable don't do any great harm. There are no glowing purple faces here.

I wouldn't necessarily call the new remaster a night-and-day difference from the last Blu-ray, but its best scenes have a small yet appreciable improvement in clarity and visible detail. Presented in the movie's original 1.85:1 aspect ratio with tiny letterbox bars, the 1080p/AVC MPEG-4 encode offers a very pleasing, film-like image with excellent contrast and black levels, and often striking use of vivid colors. 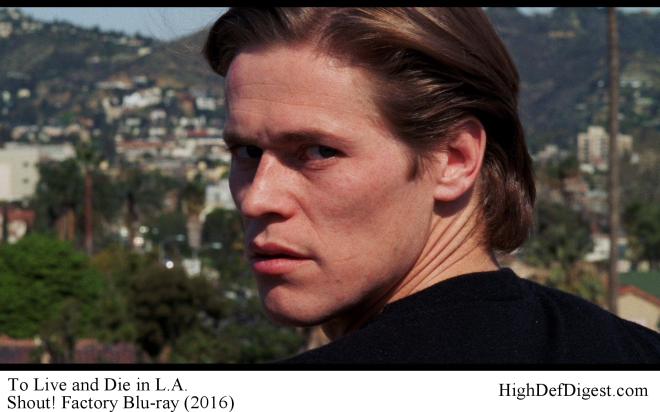 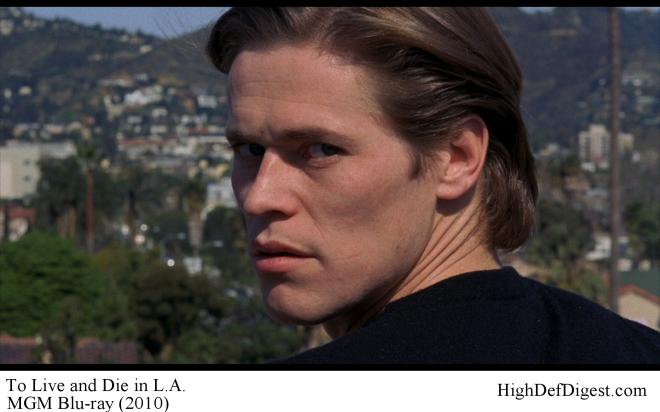 On the other hand, the movie's photography is frequently very grainy, to emphasize the gritty subject matter. As a result, many scenes are limited in how crisp or detailed they can appear. The grain is mostly resolved well, but it comes across as excessively noisy in some scenes.

Color saturation also seems boosted a bit. In my estimation, this works to the movie's benefit during most of its running time. (The '80s were a famously garish time.) However, they may appear oversaturated on occasion, which can lead to some overly orange skin tones. In these instances, the MGM transfer may be more accurate, if duller. Despite this, I still give the Shout! Factory disc a slight edge overall. 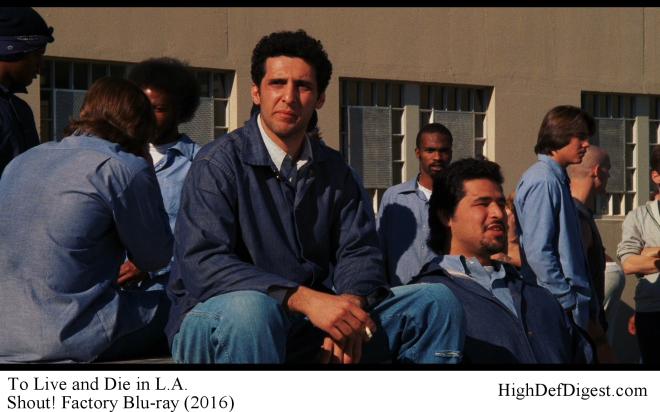 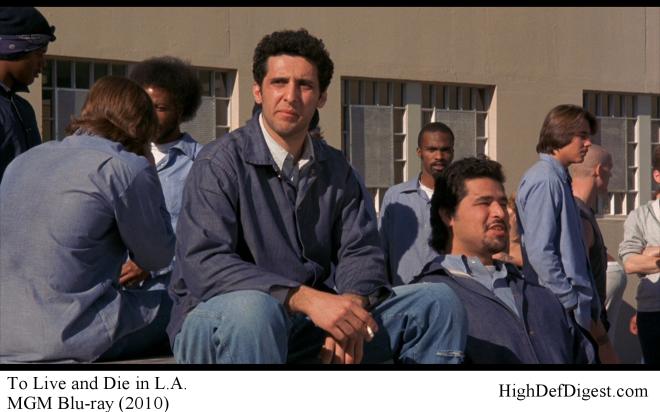 The movie's soundtrack is provided in a choice of DTS-HD Master Audio 5.1 or 2.0 options. In 1985, the film played theatrically in Dolby Stereo format. Arguably, the 2.0 track is intended to replicate that, while the 5.1 version has been sweetened for home theater. The disc defaults to 5.1 and that's my recommendation as well. The remixing is tastefully done and opens up the soundstage without imposing any distracting gimmicky effects.

The Wang Chung musical score has broad stereo separation and benefits the most from bleeding into the surround channels, though the 5.1 track also makes really effective use of ambience and atmospherics. The surround speakers don't call too much attention to themselves, but the famous car chase puts squealing tires and revving engines around the room in a convincing manner.

The soundtrack is not a modern dynamic range powerhouse. Gunshots and other sound effects are crisp, but rarely have much bass kick. The explosion at the start of the film is loud but doesn't dig very deep. Even the music is light on bass. It still sounds very good for a movie of this vintage, though.

The 2.0 track is encoded at a lower volume, so you'll need to compensate for that before trying to compare the two. From the scenes I tested, the music and sound effects seemed to have more presence and impact in the 5.1 mix. In comparison, I favor that. However, the 2.0 option sounds good enough that it's a viable alternative for viewers who consider themselves purists. 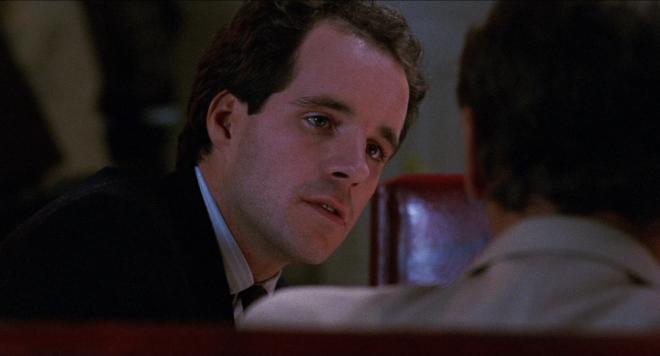 Shout! Factory licensed and has carried over almost all of the bonus features from the 2003 Special Edition DVD. 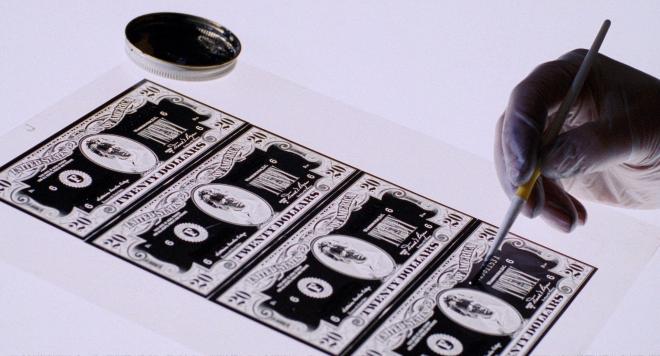 For the Collector's Edition, Shout! Factory has commissioned several new interview featurettes. Although they're all pleasant enough to watch, none of them offers any particularly revelatory information about the movie or its production. The fact that one of the interviews spends nine minutes of screen time talking to an actor who had a 30-second bit part in the movie suggests that the disc producers really stretched to find people connected with the film who were willing and available to talk about it now.

A common refrain in these interviews is that all the participants claim director Friedkin treated them well and was very respectful to them, which was not at all his reputation at the time.

The only thing missing from the 2003 DVD is a teaser trailer, which was rather lame and conventional anyway. 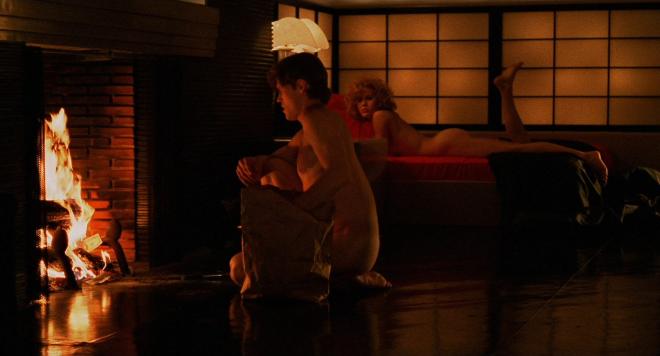 William Friedkin's 'To Live and Die in L.A.' is a hugely entertaining blast of '80s style that still holds up as a damn good crime thriller. The new Shout! Factory Collector's Edition offers a strong A/V presentation and a decent selection of bonus features.

The disc is also a solid upgrade from the 2010 Blu-ray release of the film. I'm not sure that it's a dramatic enough improvement to necessitate a double-dip for those who already own the old disc, but true fans will be pleased, and anyone who doesn't have the movie yet should definitely look toward this copy.