Overview - Tough-talking New York City detective Popeye Doyle and his partner uncover an international drug smuggling ring, but it's Doyle's feverish and relentless pursuit of the suspects that drives the investigation forward.
OVERALL
Better, But Flawed 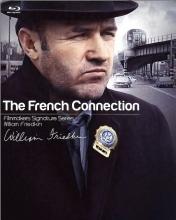 I first saw 'The French Connection' in the mid-'90s at a repertory theater as part of a double-bill with 'Chinatown'. Roman Polanski's period mystery was then and still remains a timeless masterpiece. At the time, William Friedkin's police thriller felt terribly dated, and seemed to me the vastly inferior of the two movies. Ironically, in the ensuing years, so many other cop movies and TV shows have co-opted the film's style and tone that 'The French Connection' no longer feels dated at all. If not for some of the fashions and the clunky old cars, the movie could comfortably be released to theaters today or form the basis for a long-running series on HBO or the FX network.

Of course, familiarity and imitation have dulled much of the impact of 'The French Connection'. In its day, the movie's bracing use of violence and language, and its depiction of morally-ambiguous cops whose working methods were just as dirty as the criminals they chased, were pretty shocking. The film was raw, urgent, and very much of-the-moment. Despite a frankly thin story, the movie was a sensational hit and won a bunch of Oscars, including the coveted Best Picture.

Gene Hackman and Roy Scheider star as Jimmy "Popeye" Doyle and Buddy "Cloudy" Russo, two New York narcotics detectives who've wasted too many years shaking down nickel-and-dimers. Popeye's abusive behavior and flagrant racism are seen as assets to his job, and Russo isn't far behind. With little support from their superiors, the pair discover that a major drug shipment is coming in from Marseilles. Popeye and Cloudy believe that taking down the French kingpin behind the smuggling operation will be the big case that makes their careers. Thus they tail the man in order to ferret out his base of operations.

Although some of the specific details of the plot are a little confusing, that's really all there is to the story. They identify the man, they track him down, and they try to bust him. There isn't much complexity or character development. Popeye's a hot-headed, racist jerk at the beginning of the movie, and a hot-headed, racist jerk at the end. What makes the film so exhilarating is its style. Friedkin directs with a gritty freneticism. He uses handheld cameras, jagged editing, and a discordant score to create constant feelings of excitement and unease. In almost cinéma vérité fashion, long stretches go by without much dialogue. The film builds a strong, authentic sense of atmosphere in the seedy neighborhoods and bitterly cold New York winter. And then there's the justifiably-famous car chase, in which Popeye tries to outrun an elevated train. The scene has been endlessly imitated, parodied, and even outdone, but still packs quite a visceral punch.

Truth be told, 'The French Connection' is probably more notable for breaking the mold of previous police thrillers and setting a bold new precedent than it is for being a great piece of storytelling in its own right. In terms of dramatic content, the film has been bettered over the years by TV shows like 'The Wire' and 'The Shield', which adopted its stylistic techniques and explored that thin moral divide between cops and criminals in much greater depth. Still, there's no denying that 'The French Connection' was a landmark film, and deserves its place in cinematic history.

20th Century Fox Home Entertainment first brought 'The French Connection' to Blu-ray back in early 2009. That 2-disc set quickly became one of the most controversial releases on the high-def format due to some bizarre revisionist color-timing decisions imposed by director William Friedkin. The color transfer was so ugly that even the movie's cinematographer spoke out against it.

Three years later, Fox has finally issued a brand new remastered edition of 'The French Connection' as part of the studio's Filmmakers Signature Series collection. At the time of this writing, the disc is exclusive to the Best Buy retail chain, and has slipped onto store shelves with little fanfare or advertising.

Contents of the previous 2-disc set have been consolidated onto a single disc this time. The movie comes packaged in a standard Blu-ray keepcase with slipcover, both sporting the same new artwork that prominently features William Friedkin's signature on the front. The back cover states that the disc has a "new high-definition master supervised by director William Friedkin and cinematographer Owen Roizman."

The disc loads to the main menu with no obnoxious forced promos or trailers. The menu system retains the same basic design as the previous Blu-ray. Indeed, the chapter selections screen and timeline graph still contain thumbnail images from the older color transfer. 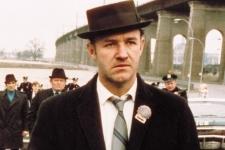 The specifics of what went wrong with the last Blu-ray release are described in some detail in my review of that disc. The gist of it is that William Friedkin came up with the goofy idea that he wanted to give the movie a so-called "pastel" color scheme that essentially made it look like a black & white film that had been colorized. The transfer had cartoonish colors with a pervasive purple tinge, as well as blooming whites and detail clipping due to electronic contrast manipulation. Needless to say, it looked terrible. Nonetheless, Friedkin vehemently defended his decisions, and even engaged in a war of words with Owen Roizman, the movie's original Director of Photography, who called the disc "atrocious."

At the time of that disc's release, Friedkin even claimed in interviews that he planned to give all of his old movies the same sort of pastel makeover, including 'The Exorcist'. Fortunately, the backlash against 'The French Connection' must have brought him to his senses and forced him to reconsider those plans. By the time 'The Exorcist' came to Blu-ray in 2010, the director had mended fences with Roizman. The two men collaborated together on the transfer for that movie, which had perfectly reasonable colors and no pastel nonsense. And now they've gone so far as to address the mistakes of 'The French Connection' as well.

In a supplemental featurette on the old disc (not retained here), Friedkin demonstrated a before-and-after comparison of the raw high-def scan of the original film elements (which had normal colors) with his recolored version. My assumption is that the first scan, prior to the director's tinkering, formed the basis of this new remastered edition. So, the big question now is: Does the movie look better?

Mostly, yes. Keep in mind that 'The French Connection' was always a rough-looking movie that was shot primarily with handheld cameras and high-speed film stock to give it a gritty, raw, "documentary-like" feeling. The new 1080p/AVC MPEG-4 transfer (at the original 1.85:1 theatrical aspect ratio) is frequently very grainy and sometimes quite soft. Detail and grain levels can fluctuate even from shot-to-shot within scenes. This is all normal and fitting for the movie's intended style. The digitization of the grain sometimes looks more like video noise than film grain, but not unforgivably so.

As for the colors… ?

First off, let me say that the new transfer is certainly better than the old one. Not perfect, but better. The worst of Friedkin's misguided changes have been undone. Contrast levels look normal, and no longer bloom or crush detail in whites. Faces don't suffer from an ethereal glow anymore. The "pastel" business is gone. Most colors look "normal," for lack of a better word. However, much like the transfer for 'French Connection II', colors are sometimes oversaturated. Blood squibs are bright red and look quite fake. (Giving the benefit of the doubt, that may have been an MPAA requirement.) The lawn on the National Mall in Washington seems a little too vibrantly green for a scene that's supposed to take place in the middle of winter. Even so, I'm willing to give that a pass.

That crazy purple tint from the old transfer was also removed. Unfortunately, in many scenes, it's been replaced with teal instead. Yes, 'The French Connection' has been teal-ified, to make it look more like practically every movie made in the 21st Century. Blue skies and water are often teal now. Neutral grays, such as the walls of the police station, are shifted toward teal. Whites in things like shirts, eyes and even teeth frequently have a disturbing teal tinge.

This may not be a problem in every scene, but it's a problem in a lot of them. Perhaps most frustrating is how inconsistent the issue is. The degree of teal can vary from shot to shot. For example, in an early scene in Marseilles, the villain Charnier travels by boat. Shots of the front of his face have a teal sky behind, while shots from behind his head have a blue sky. The color of the water also varies from teal to natural blue depending on the shot. I can accept that the original photography may have had some color variance issues, but the teal is clearly a modern revision.

Admittedly, the teal color grading fad is a huge pet peeve of mine, especially when it comes to older movies ('Aliens' being a particularly egregious example) that have been retroactively tealed up. Perhaps this may not bother you as much as it bothers me? What this comes down to is that the remastered Blu-ray is still indisputably an improvement over the last release of 'The French Connection', and I will recommend it as such, but the movie also continues to suffer from frustrating color issues. They're just different color issues than the last time around. 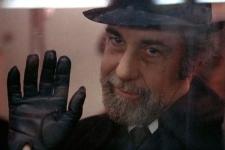 The audio options on the remastered Blu-ray are identical to those on the previous disc, so I'll just repeat what I said about that one:

During its 1971 run, 'The French Connection' played with a monaural soundtrack. The Blu-ray provides the audio in three options, the primary being a new DTS-HD Master Audio 5.1 remix. Also included are a Dolby Digital 2.0 downmix from the 5.1 master, and the original mono mix in Dolby Digital 1.0.

As far as remixes go, the 5.1 track is fairly effective. The score has been opened up, and sounds like it may have been remastered from the original recording elements rather than just processed into fake stereo. The surround channels are used sparingly. The few directional pans are organically integrated without coming across too gimmicky. Individual sounds in the mix are clear and distinct. Gunshots have nice kick.

Of course, the soundtrack still suffers the burden of its age. Dialogue is sometimes muddy. ADR and foley work stand out as artificial. The musical score and many sound effects (during the car chase in particular) are shrill and screechy. Even so, the audio sounds pretty good overall. 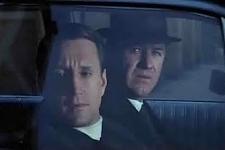 As mentioned earlier, the contents of the prior 2-disc Blu-ray set have been consolidated onto a single disc here. The majority of material has carried over, but not everything.

I really hoped and wanted this remastered Blu-ray edition of 'The French Connection' to fix all of the last, disastrous Blu-ray release's mistakes and be the definitive high-definition version of the film. Unfortunately, I don't think it quite achieves that goal. Although certainly better, the new transfer is still burdened by needless (though different this time) color timing issues. Regardless, this disc is at least watchable, which can't be said of the previous copy. For that reason, and since it seems unlikely that we'll get another remaster anytime soon, I will recommend the disc for purchase, with some reservations.