Written and directed by a 24-year-old Francis Coppola, Dementia 13 centers on the dysfunctional Haloran family, who have converged at Haloran Castle to enact a morbid ritual in remembrance of Lady Haloran’s (Ethne Dunn) deceased daughter, Kathleen (Barbara Dowling). Secrets shroud Kathleen’s demise, and soon there is a mysterious interloper prowling the grounds with a big axe to grind… Genuinely engaging and well-photographed, Dementia 13 is a bone-chilling horror classic sure to thrill horror enthusiasts and Coppolla fans alike.

A legendary filmmaker has got to start somewhere. While there is the occasional instant breakout personality whose first feature film turns out to be a box office success, others need to take their time and cut their teeth on lower budget movies. They need a place where they could learn on the job and still produce somewhat decent content that reaches an audience. For an entire generation of great filmmakers, the best place to do that was under the nurturing eye of Roger Corman. Dozens of filmmakers got their start working for him and in the case of 1963's 'Dementia 13,' Francis Ford Coppola got a chance to craft a lean thriller with a no-frills budget that is effective and creepy to this day.

It was supposed to be just a simple family reunion but everything quickly goes wrong. Louise Haloran (Luana Anders) married into the close-knit Irish family. Her husband John (Peter Read) is her only connection to the family fortune should the matriarch Lady Haloran (Eithne Dunne) pass away. When John suddenly dies of a heart attack while the two are in a rowboat on a lake, Louise must think on her feet if she ever hopes to gain any of the family inheritance. After dumping his body into the water, she fabricates a letter stating John had to go on an emergency business trip to New York. Now all Louise has to do is keep up the ruse of her husband's business affairs abroad long enough for the ailing Lady Haloran to die.

Unfortunately, the Haloran family is marred by tragedy. Seven years earlier the youngest daughter Kathleen drowned in the pond in the back of the house. Every year the Haloran family comes together in memoriam. Richard (William Campbell) and his fiancé Kane (Mary Mitchel), and the youngest son Billy (Bart Patton) are all on hand to support their mother's grief, while also eyeing Louise with a great amount of suspicion. What should be a somber but peaceful time for the family ahead of Richard and Kane's wedding turns deadly when someone starts killing off members of the family with an axe! Only the family physician Dr. Caleb (Patrick Magee) knows the full history of the family and is capable of uncovering the clues to the murderer's identity. 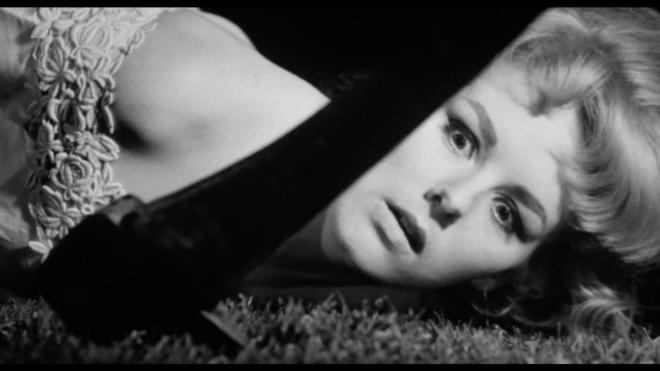 For all intents and purposes, 'Dementia 13' is a brisk and effective 75-minute thriller. The film wastes little time getting itself set up, light the fires, build steam and let the trail roll. Within just a few seconds we see Louise with her husband John, know their marriage is strained, learn the stakes involved, and we see John's untimely death. Because of this efficient setup, we're fully onboard with Louise and her conniving little plot to loot the family's fortune. It's also a great bit of fun that because of her unscrupulous deeds, we're able to deduce she isn't our hero - even though we learn about the tragic and messed up history of the Haloran family through her eyes. I'm reluctant to say what happens next even though this is a well-known movie, amazingly there are people out there who haven't seen it. To that end, I don't want to spoil one of the best scenes of the movie. Suffice to say, this may be a low-budget drive-in toss away thriller, but it works really well.

Like most Roger Corman productions, 'Dementia 13' is hardly a masterpiece of filmmaking, the plot is a little thin, production value limited to the Italian sets used and the acting can be a bit stiff. That said, the final product is pretty good entertainment. While not Coppola's first feature directing effort, it proved to be one of this first breakout moments. 'Dementia 13' didn't put him on the map the same way his screenwriting work for 'Patton' did, but this little thriller shows just how good Coppola was with limited resources and time. Shot in just 9 days, 'Dementia 13' is a showcase of efficient filmmaking and storytelling. Ironically enough that isn't something Coppola would later be known for, but with this film, the young Coppola was in fine form.

'Dementia 13' is as much a success for Coppola as it is for Roger Corman. Corman has long been branded the king of schlock disposable cinema, but you can't really fault a guy for filling a content void and doing it successfully. This is especially true when you factor in that the man is responsible for launching such names as Martin Scorsese, Joe Dante, Jonathan Demme, Jack Nicholson, and James Cameron to name a few. If anything the outcome of 'Dementia 13' is proof positive that Corman had an eye for talent.

Considering its unfortunate state as a mainstay of public domain, 'Dementia 13' is often pegged with a bad rap for being cheap and exploitive. While it is that, it is also actually really good at what it does. It's atmospheric and brooding without calling too much attention to itself. It tells a solid story quickly and gets out of your way leaving some lasting impressions, in particular, the gnarly murders! It'd been a number of years since I last saw this film in earnest and it was a lot of fun reconnecting with it. I'd forgotten that impressive opening scene. I'd forgotten that creepy monkey with an axe toy. I'd forgotten that eerie score and all of it came flooding back in a great way. 'Dementia 13' is far from being a perfect film, but it's still a great little flick and offers up a solid entertainment value.

'Dementia 13' arrives on Blu-ray courtesy of Film Detective. Housed in a standard Blu-ray case, the film is pressed on a Region Free BD-R25 disc. The disc opens up directly to a static image main menu with the only navigation option available to select whether or not you want to watch the film with subtitles.

With a 1080p 1.78:1 transfer, 'Dementia 13' looks about as good as one can expect for a public domain film with flawed elements available. The print sourced for this transfer appears to be in pretty good shape, only some slight jitter during the opening credits and a couple small scratches. The image appears to have been scrubbed with some DNR as there doesn't seem to be much apparent film grain. Detail levels are 50/50. Some moments look great, especially if a character or an object is in closeup, but midranges and wide shots can appear a bit smeary and soft. Of course, that could be a baked in issue and not a fault of the transfer. Black levels are inky and there is a nice amount of shadow separation, but the image never really develops a sense of depth to it. Whites can also appear blown out at times, but again, that could also be due to filming constraints. In all honesty, this is probably the best this film has looked on home video, I've looked at some pretty terrible DVDs and VHS tapes over the years, but fans hoping for a miracle restoration won't find it with this release - if ever.

While the image quality of 'Dementia 13' is at the very least a notable upgrade over previous DVD releases, I wish I could say the same for the English DTS-HD MA 2.0 audio mix. This is a very soupy sounding movie, almost as if everything was being filtered through a plastic cup with a string punched into the center of it. While you can hear the dialogue well enough, there just isn't any presence to it. It's very flat and often tinny sounding. This is especially true when a lot is happening on screen. It helps to turn up the volume so you can at least hear what is being said a little more clearly, but doing so exposes some background hiss. About the only aspect of this mix that comes away unscathed is the creepy score. That music still maintains a jarring presence and helps maintain the mood of the film. It gets the job done, but it's an unremarkable track.

While names like Roger Corman and Francis Ford Coppola seem like an odd pairing today, back in 1963 that was how low budget films like 'Dementia 13' were made. If Coppola hadn't gone on to make films like 'The Godfather,' 'The Conversation,' let alone 'Apocalypse Now,' this film may not be remembered today. As an early feature for a young director, 'Dementia 13' is a tight little thriller that is actually very entertaining and provides some solid shocks. Film Detective brings 'Dementia 13' to Blu-ray with what can only be described as a serviceable A/V presentation. It's pretty good for what this movie is, but this is a title that could use a more comprehensive restoration effort - one that may never happen considering its Public Domain status. Absent of any extra features of any kind, I'm left to call this one for the fans only.