Newly Re-mastered in HD! The Blob returns... more outrageous than ever in this 1972 sequel to the popular sci-fi classic! Plenty of familiar faces, including Robert Walker Jr. (Ensign Pulver), Larry Hagman (Dallas), Sid Haig (Busting), Burgess Meredith (Rocky), Dick Van Patten (Eight is Enough), Godfrey Cambridge (Cotton Comes to Harlem), Cindy Williams (Laverne & Shirley), Carole Lynley (The Poseidon Adventure), Gerrit Graham (Used Cars) and Shelley Berman (You Don t Mess with the Zohan) add to the fun. A geologist (Cambridge) unwittingly brings home an unusual frozen piece of debris from the North Pole. But when it accidentally thaws, the hungrier-than-ever Blob comes to life again, consuming nearly everyone in its path and terrorizing the town. No one is safe as it crawls into a bowling alley, oozes its way across an ice rink, becoming grotesquely bloated with the blood of its victims... can this bizarre creature ever be stopped? TV legend Larry Hagman directed this cult classic, the only feature film he ever directed upon its 1980s re-release, the film was tagged "The Film that J.R. Shot!".

"I don't suppose you've got any identification?"

Nostalgia can be a pretty bitter pill to swallow sometimes. It's tough to realize that a movie you used to have fond memories of was actually coated with a rose-colored veneer. You want to recapture that child-like wonder and excitement you once had, but when you have to own up to the fact that the film isn't as good as you remember - there's no fighting it. You just have to accept things the way they are. Sadly, that has been my experience with 1972's 'Beware! The Blob.' The film struggles with tone as it aims to pay homage to the 1958 original while playing up the humor and the results are less than effective.

If you've seen any horror or science fiction film made within the last sixty years, you know that if you're in the arctic and you find some sort of thing, strange creature, and or frozen goop of some sort that you don't bring it back home with you! Apparently, oil worker Chester Hargis (Godfrey Cambridge) didn't get to the movies much. After finding one such frozen mass of goop, good old Chester brings it home with him to civilization. Unfortunately, his wife doesn't put it right back into the freezer and lets it thaw! Now the flesh dissolving, people eating Blob is on the loose! When Lisa (Gwynne Gilford) discovers the remains of Chester and his wife and witnesses the oozing mass of doom escape, she's got to convince her boyfriend Bobby (Robert Walker Jr.) that the Blob is real. Even the skeptical Sheriff Jones is convinced when the pink ooze attacks the local bowling alley and traps Bobby, Lisa and a bunch of other folks inside a closed down ice skaing rink!

It's actually rather difficult to know where to start with a critique of 'Beware! The Blob.' This movie is just strange and oddly paced. As the first and only feature film directed by Dallas star Larry Hagman, you can see him struggle to figure out what he's doing with the film while the camera is rolling. If you've seen this film, the really awkward opening kitten sequence is a prime example of this. I'm a cat lover, I have two of them myself, and admittedly my brain has a tendency to melt when I see one. This sequence didn't do that, it put me into a state of complete confusion because I couldn't figure out why I was even seeing this little critter. Obviously, you do expect the titular ooze to destroy that cute little fuzzball, but that moment doesn't come - at least not right away. Instead, we're introduced to Chester and his wife and their strange domestic bliss. The rest of the film plods along in just that way. It desperately tries to make stabs at humor and horror but never really manages to accomplish much with either. I'd read a long time ago that apparently Hagman rarely used the screenplay for the film and would just have his cast improvise scenes and dialogue in the moment. If this is true, it shows. There are so many awkward moments where the cast looks like they're just standing there waiting for some kind of direction and when that doesn't happen they just do whatever comes to them. 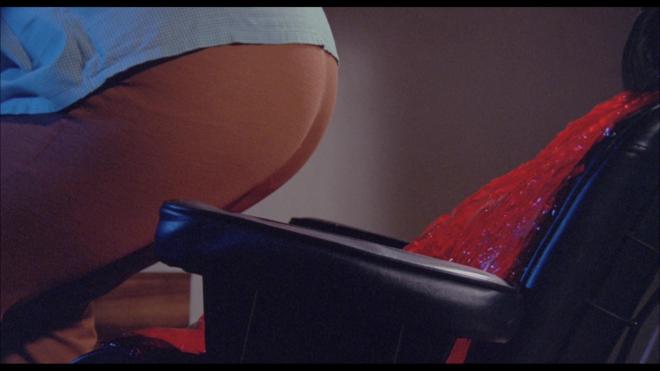 While the front half of the film is clunky, once the Blob starts eating some hippies and hobos, the steam picks up and very nearly saves itself once the people get stuck in the ice rink. By that point, for most audiences, too much stale clunky stuff would have passed for them to care all too much what happens to Walker's Bobby and Gilford's Lisa. That isn't to say this film is a total loss, it's just going to test a lot of people's patience as the film slogs along at a slower pace than its titular monster. There's a pretty good reason why was the late Larry Hagman's only feature film. At this point in his career, he'd only directed a few episodes of 'I Dream of Jeannie' and he seems to have approached this film in the same way - only he didn't have Barbara Eden's charm to fall back on. Even his own cameo with Burgess Meredith and Del Close (who would appear in the 1988 remake) feels forced. The film is more akin to the original film's style of non-horrific horror. Gore is minimal compared to other horror films that were reaching movie screens at the time. The Blob's kills are still inventive and fun, it's the characters and scenarios that slow the film down.

I've been a fan of 'The Blob' since I was a wee little tot. I think I was all of three years old when I first saw the Steve McQueen original and I loved every minute of it. It was scary, but not in a way that gave the little me nightmares. By the time Chuck Russell put out his remake in 1988, I was all in and loved it every time the local TV station would air it - which was actually pretty often. Sandwiched between these two great movies is this clunky film. I remember seeing it when I was little, I can't recall how old I was but I do remember enjoying it quite a bit, but hadn't seen it in probably 25 years. I was really excited for this release because it meant I could complete my "Blob Trilogy." While the collection is now complete, it does come with the bittersweet understanding that 'Beware! The Blob' is just not as good as I remember it. It's still enjoyable, especially the last half hour, but if you're new to the film don't be surprised if you have difficulty getting that far into the film. I honestly wish I could say that it's better than it is. It has moments, but those moments are relatively far between.

'Beware! The Blob' arrives on Blu-ray courtesy of Kino Lorber and their Studio Classics label. The film is pressed onto a Region A BD25 disc. The disc is housed in a standard Blu-ray case and opens directly to a static image main menu with traditional navigation options.

'Beware! The Blob' arrives with a bright and beautiful 1.85:1 1080p transfer. The film has always had that sort of cheap 70s amateur over-lit exploitation film look to it and this transfer does the film justice. Film grain has been retained and offers plenty of detail levels to appreciate. All you have to do is look at that horrendous 70s shag carpeting to appreciate how great the image looks. Facial features, clothing, and even the pick Blob itself all look great. There is some baked in softness here and there but those are all part of the film from the get-go and not an issue with the transfer. Colors are bright and feature those bold 70s primaries with healthy flesh tones. The print sourced for this transfer is actually in pretty decent shape with only a few small scratches and minimal speckling to report. All around a pretty great looking transfer.

As great as the image transfer for 'Beware! The Blob' is, the audio tends to suffer. Part of the problem is that the dialogue isn't all that intelligible. It often sounds like some of the cast are talking with thick mittens over their mouths. I'm willing to bet a lot of these issues are cooked into the audio mix itself and couldn't really be fixed. On that note, some sound effects still come through with a bold natural quality to it like gunshots or the canned screams when the Blob attacks someone sounds great. It's almost as if they didn't have the cast loop their dialogue after filming was complete. Additionally, age has taken its toll as there is quite a bit of hiss and pop to the track giving some extra noise for the hampered dialogue to contend with. You can still watch the film and follow what's going on, but you're going to want to keep a thumb on the volume.

Audio Commentary: Historian Richard Harland Smith flies solo for this commentary. He's well informed and provides quite a bit of production detail about the film.

Alternate Title Sequence: (HD 2:42) This is kind of kitschy fun since that one of the titles they were playing with was 'Son of Blob' and that may have been a better title for this little movie given its nature.

'Theatrical Trailer: (HD 1:45) It's kind of fun to see that they were going with 'Son of Blob' as the title of this movie.

Sometimes it can be fun to revisit an old favorite, other times it can expose your memories as a bit rose-colored. I wanted to love 'Beware! The Blob' more than I did. It's an awkward horror/comedy that can be a slow slog to get through. Thankfully the final act finds its footing but even that may be too little too late for some. Kino Lorber brings 'Beware! The Blob' to Blu-ray with a fantastic video transfer but the audio mix is a bit problematic. Extra features are a decent audio commentary and a collection of other horror movie trailers. At the end of the day, give 'Beware! The Blob' a rent. It's got some fun moments but it may test the patience for some people.

Sale Price 14.99
List Price 29.95
Buy Now
3rd Party 14.24
In Stock.
See what people are saying about this story or others
See Comments in Forum
Previous Next
Pre-Orders
Tomorrow's latest releases