The escape of Bubber Reeves from prison affects the inhabitants of a small Southern town.

You can't judge a book by its cover, so the saying goes, and it's equally ill-advised to make assumptions about a film based on its cast, crew, and title. Take 'The Chase.' With legendary actors like Marlon Brando, Jane Fonda, Robert Redford, Angie Dickinson, Robert Duvall, James Fox, E.G. Marshall, and Miriam Hopkins, a screenplay by Lillian Hellman (adapted from a novel and play by Horton Foote), and direction by Arthur Penn ('Bonnie and Clyde'), why wouldn't we anticipate a stirring, literate, and riveting motion picture? But dim the star wattage and peek under the hood and you'll find a rambling, unfocused movie that travels in fits and starts on a circuitous path that doesn't really lead anywhere. Although some big moments punctuate the story and a motley crew of intriguing characters pique interest, 'The Chase' is hardly the fast-paced pursuit film its title promises. On the contrary, this off-beat, soapy portrait of a small Texas town and the small minds that populate it is often maddeningly inert.

When the residents of a tight-knit community learn no-good trouble-maker Bubber Reeves (Redford) has escaped from prison and might be headed back home, they batten down the hatches and steel themselves for an imminent showdown. Sheriff Calder (Brando), who many believe is beholden to the town's rich, smug banker, Val Rogers (Marshall), combs the area looking for clues that might help him capture the convict, while Bubber's estranged wife Anna (Fonda), who still loves him despite carrying on a torrid affair with Val's son Jake (Fox), tries to sort out her conflicted feelings and loyalties. Other characters peppering the spicy brew include Edwin Stewart (Duvall), who fears Bubber may seek revenge for a prior betrayal; Edwin's promiscuous wife Emily (Janice Rule), who tries to emasculate and humiliate her husband at every turn; Calder's devoted wife Ruby (Dickinson); and Bubber's guilt-ridden and distraught parents (Hopkins and Malcolm Atterbury). As tensions rise, Calder tries to keep the percolating pot from bubbling over, but when the riled up residents go on a rampage, he's powerless to stop them.

With its tangled relationships, eccentric characters, and rural setting, some have likened 'The Chase' to the granddaddy of all potboilers, 'Peyton Place.' 'The Chase' tries to be edgier and more layered even as it depicts a host of tawdry episodes (a violent beat down of Sheriff Calder by a gang of blood-thirsty thugs is especially brutal), but it lacks cohesion and direction. A rebellious, anti-establishment tone that would come to fruition and heavily influence cinema a couple of years later permeates the film, but it's not developed enough to wield the desired impact, and though elements of 'High Noon,' 'The Ox-Bow Incident,' and 'Rebel Without a Cause' - as well as a striking parallel to the Kennedy assassination - also pervade the proceedings, they only further muddy the film's troubled waters.

Hellman was one of America's premier playwrights, and the topics she addresses in her two most famous dramas, 'The Children's Hour' and 'The Little Foxes' - bigotry, greed, class struggles, gossip, hypocrisy, and lack of morality - also turn up in 'The Chase,' where they all simmer beneath the surface and insidiously infect the characters. No one is immune to the malaise, and the effects, characterized by disillusionment and regret, seem terminal. Hellman, however doesn't deserve all of the blame for the choppy, meandering script. Producer Sam Spiegel reportedly disliked her original draft and ordered major chunks rewritten, prompting Hellman, who was not told of the changes, to later disown the film.

Spiegel also clashed with director Penn. When shooting wrapped, Penn immediately began work on another project and Spiegel grabbed the reins of 'The Chase,' editing it without Penn's knowledge or input. His decisions altered the tale's intended rhythm and flattened the performances, inciting a disgusted Penn to also criticize the finished film.

And yet somehow the actors rise above the treatment they receive. Even when subdued, Brando is a mesmerizing presence, and though his portrayal pales when compared to Terry Malloy and Stanley Kowalski, his work remains impressive. Fonda, Redford, Duvall, and Dickinson all file breakout performances in roles that would help shape their respective careers, and old-timers Marshall and Hopkins make the most of their limited screen time. Today, you'd be hard-pressed to find a more star-studded cast, and the big names in front of and behind the camera sustain the film's appeal.

Terrific acting, however, only takes a movie so far. Joseph LaShelle's superior cinematography also enlivens 'The Chase,' but can't save it. Though plenty of bizarre antics hold our attention, their random nature, the film's excessive length and sluggish pacing, and too many narrative tangents that rev up then mysteriously peter out dull enthusiasm and ultimately leave us dazed and confused. 'The Chase' is surely an interesting curio that makes some incisive observations about society and relationships, but it never lives up to its potential, which is especially frustrating given the array of talent involved. 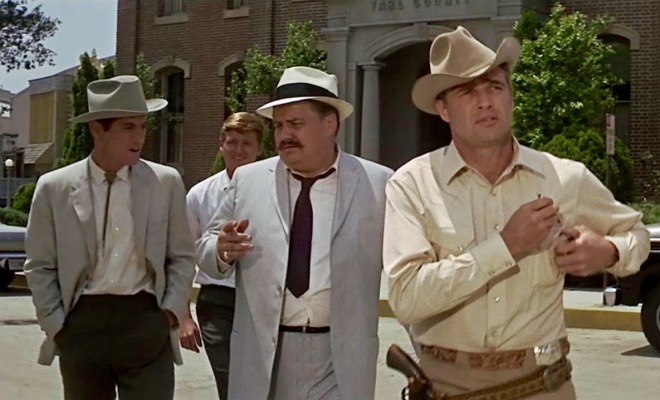 'The Chase' arrives on Blu-ray in a limited to 3,000 edition packaged in a standard case. An eight-page booklet featuring an essay by film historian Julie Kirgo, production stills, and a reproduction of the movie's poster art is tucked inside the front cover. Video codec is 1080p/AVC MPEG-4 and audio is DTS-HD Master Audio 1.0. Once the disc is inserted into the player, the static menu without music immediately pops up; no previews or promos precede it.

Lush, vibrant color was a bit of an anomaly in the 1960s, but cinematographer Joseph LaShelle took great pains to infuse 'The Chase' with sumptuous hues, and Twilight Time's superior 1080p/AVC MPEG-4 transfer beautifully honors his efforts. Primaries, especially reds, pop, and a soothing, warm glow bathes several scenes. Excellent contrast and clarity nicely highlight details and enhance depth, while faint grain provides the picture with critical texture. Black levels are rich and deep, shadow delineation is quite good, patterns are rock solid, and flesh tones remain natural and stable throughout. Close-ups spotlight the beauty of Fonda and Dickinson and really show off the gruesome effects of a brutal beating Brando's character receives midway through the film. No nicks, marks, or scratches sully the pristine source material, and any digital doctoring escapes notice. Once again, Twilight Time (with a big assist from Sony) presents a top-flight transfer of a classic movie, proving why the studio has earned such a stellar reputation.

The DTS-HD Master Audio 1.0 track provides clear, well-modulated sound. Fine fidelity and a purity of tone lend the track presence and depth, and no age-related imperfections, such as hiss, pops, and crackles, intrude. A wide dynamic scale handles all the highs and lows with ease while keeping distortion blissfully at bay, and sonic accents like gunfire, fisticuffs, and revving car engines are crisp and distinct. All the dialogue, even when mumbled by Brando, is clear and easy to understand, and John Barry's music score - his first for an American movie - fills the room with ease. Though rarely challenged, this solid track does its job without any hiccups.

Only a couple of extras are included on the disc.

'The Chase' is a fascinating mess. A damning portrait of small-town life in the turbulent 1960s, Arthur Penn's unfocused, meandering drama chronicles the impact of a prison break on a tight-knit Texas community. Lillian Hellman's adaptation of a Horton Foote novel and play often sputters and stalls, but the amazing cast headlined by Marlon Brando, Jane Fonda, and Robert Redford tries its best to keep the engine humming. Twilight Time's Blu-ray presentation may skimp on supplements, but terrific video and audio transfers often make this puzzling production seem better than it is. Though it probably won't wind up on anyone's favorite film list, the star power in front of and behind the camera makes 'The Chase' worth a look.