From Noon Till Three

After spending 3 unforgettable hours with an outlaw, a beautiful young widow turns her story into a worldwide famous book.

When you watch a movie starring a particular actor, you naturally go in with a certain set of expectations. Equally, if the film in question is of a particular genre, you have an additional set of expectations. When said film is a western starring Charles Bronson, you would easily assume that there would be plenty of gunfire with Bronson playing some sort of brooding anti-hero, after all, he had played that character a dozen times before. Given those expectations, it's a hell of a lot of fun to discover a flick that plays with those expectations and genre conventions and turns them on their head. Frank Gilroy's adaptation of his own novel 'From Noon Till Three' allows the traditionally gruff and tuff Bronson to show his more tender and romantic side while also being something of a convincing romantic.

Graham Dorsey (Charles Bronson) is a member of the ragtag Buck Bowers (Douglas Fowley) gang. Along with Ape (Stan Haze), The Boy (Damon Douglas) and the Mexican (Hector Morales), Graham was all set to join in on their latest bank heist scheme. When he should have been dreaming about riches beyond count, Graham has the worst nightmare of his life. Rather than go through with the heist, he does what he can to get out of it - by leading his horse into a prairie dog hole and forcing the poor animal to go lame. Without a horse, Graham can't exactly go along with the plan. When the gang stops off at the home of a rich widow named Amanda (Jill Ireland), Graham stays behind. With three hours to kill, Graham and Amanda slowly get to know each other. At first, they despise one another, but quickly they learn they're exactly what they each needed in their lives. With so little time together, their love blossoms into a thing of legend - a legend Graham will never be able to live up to.

Anytime you have the opportunity to roll a Charles Bronson film, you become jaded to the fact that the man himself was never really at all like his onscreen counterparts. If you read enough about him, the real life Charles Bronson was an honest, quiet man with a sly sense of humor and a big heart. However, if you grew up watching movies like 'Death Wish,' 'Once Upon A Time in the West,' or '10 to Midnight,' you expect a quiet-spoken man with a penchant for delivering six rounds of street justice with a gigantic revolver. If you're at all like me, you're not used to seeing a friendly side to the man with the mustache. It's moments like this that make films like 'From Noon Till Three' a real joy to discover. Not only that your favorite tough guy is starring in something more akin to a romantic comedy, but also that he pulls the material off so well. 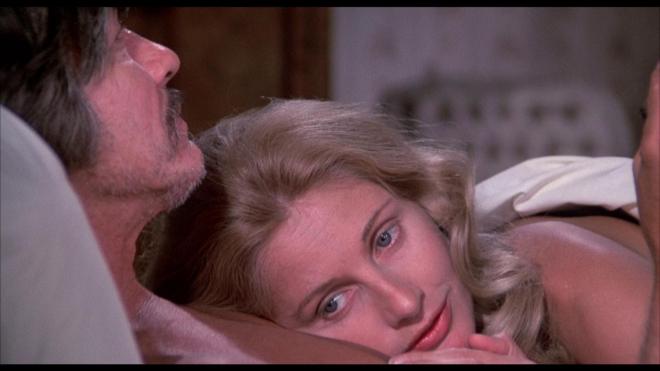 Part of why Charles Bronson's Graham Dorsey is so convincing is his frequent leading lady co-star Jill Ireland was also his real-life wife. By the time this film was released, the pair had been married eight years and starred in twelve films together! Their personal chemistry carried over into the making of this show and it's evident they were at ease with each other and knew how to play excited lovers in the throws of unchecked passion. In many cases, Bronson's best films wouldn't be the same without Jill Ireland standing in there somewhere, and having them together in a romantic farce such as 'From Noon Till Three' is a real treat. From the first time their respective characters meet you want them to find happiness in one form or another.

Helping matters is the fact that the film is also a hilarious deconstruction of myth and legend. So often a small story gets blown up and becomes a bigger fiction than the facts can ever possibly live up to. Men who were once without character or cowardly who finally do one brave act become known only as men of honest integrity. Watching Bronson's Graham cope with the legend that springs up about him is where the best comedic moments of the film come from. It's actually how I picture most celebrities who have to live with having their faces constantly splashed over tabloid covers in supermarkets. It doesn't matter what the reality is, the fiction is what people want to know and believe. Perhaps this is the same reason that I always believed that Bronson played simple everyman tough guys who could churn out a reliable one-liner when necessary. I didn't peg Bronson for a romantic or a guy who could pull off solid comedy, but 'From Noon Till Three' proves to be a great find in that arena. Another solid entry in my ever-growing collection of Charles Bronson flicks. If you've never considered sitting down to 'From Noon Till Three,' it's time you booked an appointment and gave it a try.

'From Noon Till Three' arrives on Blu-ray courtesy of Twilight Time. Pressed onto a Region Free BD50 disc, the disc comes housed in a sturdy clear standard Blu-ray case. Also included is a booklet containing stills from the film as well as an essay from Film Historian Julie Kirgo. The disc opens directly to a static image main menu with traditional navigation options.

Considering this film reached its 40th anniversary this year, 'From Noon Till Three' is provided a bright, colorful, and well detailed 1.85:1 1080p transfer. Much of the image plays to Western genre conventions with plenty of dusty browns and variations on the color tan, but there is a pleasing amount of primary pop throughout the run of the film that keeps the color pallet vibrant and lifelike. Skin tones look natural, albeit a bit pink in some instances, but nothing to suggest that reds have been pushed too heavily. Film grain is apparent and stable throughout without any appearance of DNR or other smoothing filters. Details are strong allowing for plenty of facial and costuming details as well as the impressively intricate set design work of Amanda's home to come through. Black levels and shadows are nice and strong, perhaps a bit pale in some scenes, but overall there is an appreciable sense of depth and dimension to this image. Print wear and tear is at a minimum with only a slight scratch or two and some very mild speckling apparent.

'From Noon Till Three' comes packed with a nice and lively English DTS-HD MA 1.0 mix. For a mono track, I was impressed by the sense of space and atmosphere in some of the bigger scenes, most notably during the opening dream shootout and the later chase sequence. There is some nice layering to the audio elements so that sound effects, dialogue, and Elmer Bernstein's playful score. Given its mono nature, imaging is obviously at a minimum, but there is still a sense of direction to certain sequences. Dialogue comes through clean and clear without any issue. A very good track for a fun little film.

'From Noon Till Three' turned out to be an unexpected delight. As a long time Bronson fan, this was one that I'd only heard of but never sat down to take a look at. If you're like me and haven't seen it yet, it's time to clear 90 minutes from your schedule. Bronson always had a sharp wit to him but seeing him play the comedic romantic was a nice change of pace from all of his tough guy roles he's so well known for. Twilight Time has delivered a solid Blu-ray release for 'From Noon Till Three' with a fantastic A/V presentation. Extras are a bit on the lean side, but the isolated score track is a great listen. If you've never seen Bronson play nice, 'From Noon Till Three' is well worth the time. Worth a look.