A LAPD detective is on the trail of a very handsome young man who had been seducing and slashing many young women to death.

"Jerry, I'm not a nice person. I'm a mean, selfish son of a bitch. I know you want a story, but I want a killer and what I want comes first."

The hardboiled cop thriller sub-genre has some sterling examples including films like 'Dirty Harry,' 'Serpico,' and can even be applied to films like 'The French Connection.' These are the movies where our hero is about as dirty and unethical as they come, but they're applying their particular brand of law enforcement for the betterment of society. By cutting through bureaucratic red tape, and working around little things like personal rights, the law, and ethics, the rough and tough cop is able to cut down the bad guys and take out the trash - permanently. 1983's '10 To Midnight' starring Charles Bronson is an attempt to combine the best elements of 'Dirty Harry' with Bronson's own 'Death Wish' franchise.

Leo Kessler is a man who has seen it all. As a veteran cop, he's worked homicide far too long and has had to solve some pretty tough cases using the best methods of ethical law enforcement. But when a killer, a handsome madman named Warren Stacy (Gene Davis) starts stalking women in the nude and then butchering them with a knife, Leo's tether to the law becomes increasingly strained. The evidence is all there linking Warren to the crimes, the only problem is everything is circumstantial. Every time the evidence points towards Warren, an alibi miraculously pops up and slightly points the case in a different direction. But Leo knows a rat when he sees one.

When Warren starts making illicit prank phone calls to Leo's daughter Laurie (Lisa Eilbacher), the final straw has fallen on the camel's back. Leo fabricates some evidence that will condemn Warren to life behind bars before he reaches hell itself. The only problem is Warren's wily lawyer Dave Dante (Geoffrey Lewis) can see the scam. When Leo's fresh-faced partner Paul McAnn (Andrew Stevens) is put in the position of having to testify against his partner, Leo comes clean.

By admitting to fabricating the evidence, not only does Leo get himself fired, but Warren is allowed to go free. Leo's only hope is that the prospect of life behind bars put the right amount of fear of God in Warren's heart to put an end to his lethal desires. Only one sick and perverted phone call is all it takes to prove to Leo that Warren has no intention or desire to quit, and in fact, is now emboldened to be far more brazen with his methods. Stripped of his badge and all legal responsibility, Leo is now free to carry out his own brand of justice to take this scumbag down - but can he do it before Warren strikes again? 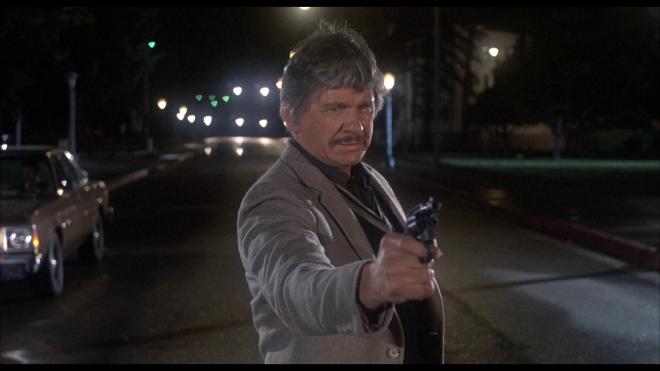 Directed by J. Lee Thompson of 'Firewalker' fame, '10 To Midnight' is about as good as it gets when it comes to enjoying a campy over-the-top Cannon Films thriller. That isn't to say that this movie is necessarily "good" in the traditional sense, but it is a good bit of early 80s action movie exploitation fun. The story isn't all that original, I mean as I mentioned at the outset, this flick is basically 'Dirty Harry' with the heavy hand of Charles Bronson applied to it. For the most part, it works but then it is very familiar. Part of the problem facing this film is that it feels like it was made about 10 years too late to truly resonate. The atmosphere of the film is designed to work with that 70s-style paranoia and government distrust while also falling into the realm of the everyman standing up as a lone warrior for society. '10 To Midnight' works but in that special Charles Bronson sort of way.

Performances for '10 To Midnight' are solid and J. Lee Thompson does a good job of getting some strong genuine emotions out of his actors, in particular, Andrew Stevens as the stressed out partner of Charles Bronson. He knows the man he's working with is a loose cannon just waiting to go off. Wilford Brimley does a decent enough job as Captain Malone, but he doesn't do much more than sigh heavily and sound exacerbated while sitting in a chair behind a desk. Charles Bronson is Charles Bronson because only Charles Bronson can do what Charles Bronson does. The man is the embodiment of "heavy" and he's in his element with this film. Lisa Eilbacher does what she can, but really the meat of her role amounts to being the stereotype damsel in distress. That's okay because it gives Charles Bronson enough reason to go full badass. To that effect, Bronson wouldn't be able to do his thing if it wasn't for the rather brave performance by Gene Davis as the madman killer. He's fully committed to being as crazy as he can be - even if that means running around fully nude with a knife.

Overall '10 To Midnight' is a great bit of campy trashy fun done the Cannon way. No one makes a movie like Menahem Golan and Yorum Globus. These guys were in their heyday through the 1980s and they're responsible for some of my favorite movies. If you're a Charles Bronson fan, this movie is for you. If you dig the Golan-Globus brand of cinematic canned cheese this is the movie for you. If you love movies featuring tough guys being gruff and tough with more than a little graphic violence, harsh language, and a smattering of tasteless nudity - this is the movie for you. If none of those things appeal to you, this ain't the movie you're looking for. Order some pizza, grab a beer, invite some friends over and enjoy '10 To Midnight' tonight!

'10 To Midnight' arrives on Blu-ray thanks to Twilight Time. Limited to a run of 3000 copies, the disc is printed on a Region Free BD50 disc. Housed in a standard clear plastic case, the disc opens directly to the main menu. Also included is a booklet featuring a fantastic essay by Julie Kirgo.

Considering the film's age and standing, I wasn't expecting much - just something better than the version I saw heavily edited for TV. Thankfully the 1.85:1 1080p transfer Twilight Time was supplied with is in pretty darn good shape. Fine film grain is retained, allowing for pleasing detail levels. All you have to do is look at Bronson's gruff, mustached face to get a feel for the detail quality. Colors are fairly accurate overall, reds feel like they were tweaked a little and can push some flesh tones into the pinks, but given the bloody nature of the movie it works well because the fake blood has a little extra pop to it. Black levels are rock solid, even during the film's darker moments, night shots, and the film's big climax - the film avoids heavy crush tendencies and allows for a pleasing sense of depth at all times. The print sourced for this transfer is in very good shape, free of any serious nicks or scratches, the only damage comes in the form of some extremely mild speckling. All around this is a pretty fantastic looking film on Blu-ray.

'10 To Midnight' arrives on Blu-ray with a strong DTS-HD MA 1.0 audio track. Even for a mono presentation this track gets a lot of extra kick. Keeping to the midranges, the film's score dips nicely into the lower registers giving a nice creepy vibe to the film. Levels are perfectly balanced so there shouldn't be any need to ride the volume button. Dialogue comes through crisp and cleanly - the only trouble spots are when Bronson doesn't feel the need to speak up, but that's not the fault of this track. Imaging is pretty one dimensional considering its presentation, however, there is plenty of space around the audio elements to give a nice sense of area and dimension. The real kick of this track is the 80s action score from Robert O. Ragland as it works to set up some of the thrills and really comes to life during the film's climax.

Audio Commentary: Producer Pancho Kohner, Casting Director John Crowther, and film historian David Del Valle keep this commentary track light, but informative. Right out of the gate this is an amusing track with the story how the movie was sold at Cannes with only a title and Bronson attached to star, the story hadn't even been worked out yet!

Radio Spots: (1:33) I love radio spots for movies. Considering film is a visual medium, I'm always fascinated by radio advertisements and how they have to go fully over the top with the marketing to sell it.

Original Theatrical Trailer: (HD 2:13) A great piece of early 80s movie marketing. It basically gives away the whole show, but it still works.

When it comes to Golan-Globus movies, '10 To Midnight' is probably one of their better, more serious efforts. Even taking the material seriously, the film is a great bit of exploitation camp featuring the one and only Charles Bronson doing what he does best by taking the law into his own hands. Twilight Time has done a pretty solid job bringing this Blu-ray presentation together with a strong A/V presentation and a great audio commentary and isolated score track to pump up the extras. I'm definitely calling this one Recommended.