An action-packed thriller starring Charles Bronson as Jack Murphy, a cop who is running to stay alive long enough to even the score with his wife's killer.

When you've got a solid reliable actor and an efficient and skilled director who actually like working with one another, you've got one heck of a great partnership. With nine films over the course of twelve years, tough guy Charles Bronson and action director J. Lee Thompson had an incredible working relationship. Bronson's rough-around-the-edges everyman style blended perfectly with Thompson's no-frills quick take shooting style. With 1986's 'Murphy's Law,' the pair bring all of their best assets to create a simple bare-to-the-bone thriller with a sly comedic edge.

Life for Detective Jack Murphy (Charles Bronson) is about as sour as it can get. His wife Jan (Angel Tompkins) has left him so she can become a stripper and marry her manager. If that wasn't bad enough, Murphy has a bit of an alcohol problem that keeps him up late, makes him sleep in too long, and forces him to show up to work looking like he got run over by a cement truck. With his career as a cop and his personal life in the toilet, an old case is about to make things worse. Joan Freeman (Carrie Snodgress) has a bad bone to pick with Jack, and she's out to make his life a living hell. Killing Jan and her new boyfriend, Joan frames Jack for the murder. With the whole police force and his own lawyer convinced of his guilt, Jack has no choice but to go on the lam to clear his name. The only problem is he's handcuffed to the fast-talking car thief Arabella McGee (Kathleen Wilhoite). When Joan kills off more of Jack's associates, the cops think she's in on the murders. If they're ever going to clear their names, Jack and Arabella will have to work together to solve the case - if they don't kill each other first.

As soon as that legendary Cannon Films logo flashes across the screen, you already have a solid idea of what you're in for with this goofy spin on the buddy cop action movie trope. With ample shares of bloody explosive violence, some 80s era sexism, plenty of foul language, and Bronson's traditional deadpan delivery style, 'Murphy's Law' is probably one of the better action/comedies to borrow a page from the '48 Hours' playbook. You've got the straight man Charles Bronson playing of the fast-talking Kathleen Wilhoite comedy relief and the results make them a solid little action odd couple. 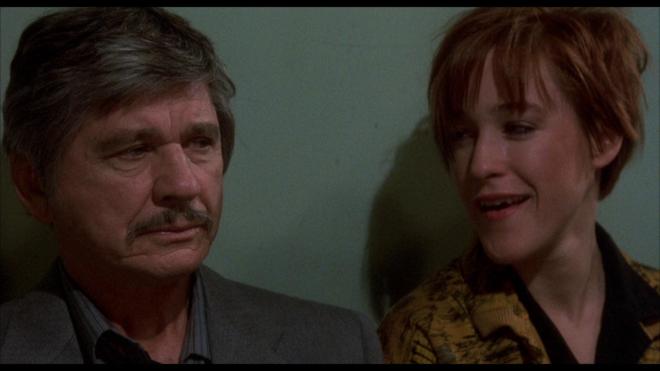 With most of his late 70s and 80s appearances, Charles Bronson was a reliable and effective presence. He pretty much had only two characters to play during this stretch of his career, the everyman pushed too far or the jaded police detective who has too much. With 'Murphy's Law,' he plays a lighter version of the jaded cop. This time around, his one-liners are amply upstaged by the foul-mouthed Arabella played by Wilhoite. Her character may not have much of an arc to follow, but her comedic bits certainly offer up their own trajectory. One could almost make a drinking game out of 'Murphy's Law;' take a shot every time Wilhoite delivers a joke. However, if you actually played that game you'd probably be dead before the film's inciting incident passed. Her jokes come fast and furious to the point they stop being funny and become a bit annoying. But then when you think you can't stand to hear one more joke from her, she slings out another zinger and the tiresome bit becomes funny all over again.

On top of the interesting pairing of Bronson and the then-newcomer Wilhoite, you have Carrie Snodgress as a rare sort of ultra-violent femme fatal. If I have one complaint with the film and her character Joan in particular, her motivation is entirely too simple. As she picks off Jack's buddies and close friends one by one stacking the evidence of guilt against him, one would have thought her motivation was something more clever than it ultimately was. I won't divulge it here, but it was an honest letdown. Her murders were so intricately plotted and so violently executed that I couldn't help but feel the need for more substance. Something that pegged off a core emotion, something to make her crimes worth all that effort. But then again, this is an 80s Cannon film we're talking about. Substance was in short supply at that studio. In spite of that shortcoming, 'Murphy's Law' is a sly and entertaining little thriller. It isn't as straight and narrow as '10 to Midnight,' nor is it an action ballet of blood and guts like 'Death Wish 3,' but it's still a great watch - especially if you're a Bronson fan!

'Murphy's Law' arrives on Blu-ray courtesy of Twilight Time. Pressed onto a Region Free BD50 disc, the disc is housed in a sturdy clear standard Blu-ray case. Included is a booklet containing stills from the film as well as an essay by Film Historian Julie Kirgo. The disc loads directly to a static image main menu with traditional navigation options.

Much like the release of Bronson's own '10 to Midnight' from Twilight Time, 'Murphy's Law' arrives with a solid 1.85:1 1080p transfer. Film grain may appear a bit pronounced in a few spots, especially in some darker sequences, but at least it doesn't appear to have been scrubbed in any way. Details come through clear offering up plenty of fine facial details. Colors are of that typical 80s style where they're either bright and loud or dark and drab depending on what a particular character is wearing. There are some wonderful outdoor daylight scenes that feature some rich and natural color saturation. If there is a complaint to be had it is that reds appear pushed a bit hard and flesh tones can appear too pink and blood a tad too bright in some spots. But that's a minor beef. Black levels are solid allowing for inky blacks with nice shadow separation without any crush issues - which is important during the big finale. The source print is in fine shape with only mild speckling. All around a great transfer.

Even with a simple English DTS-HD MA 1.0 track, 'Murphy's Law' has plenty of audio oomph. Dialogue comes through crystal clear without any interference from the over the top 80s style sound effects and the score by Marc Donahue and Valentine McCallum. You can detect that some of the one liners that Wilhoite slung out were do-overs and were looped in post; it makes me wonder what the original lines were in those instances. Gun shots have that extra loud cannon sound effect to them and they rattle the mix nicely. Imaging is on the lighter end, even with the bigger action moments, the mix sounds very front and center without much directionality to it. Age-related wear and tear like hiss or scratches aren't an issue as the track sounds clean and clear. All around an effective mix for this flick.

Audio Commentary: Film Historian Nick Redman and actress Kathleen Wilhoite keep this track lively, entertaining, and informative. Wilhoite has some great stories to share, especially within the context of being a young actress starting her career and working alongside Bronson.

It's a Charles Bronson movie. It's a Cannon film. Put those two together and 'Murphy's Law' delivers some wild entertainment. It's 80s through and through, but it's a heck of a good time. Twilight Time brings the film to Blu-ray in great shape with an excellent A/V presentation, a nice audio commentary with an isolated score track to round out the extra features. Fans of the film should be satisfied by the HD upgrade and Bronson obsessives should have a blast with this release. Worth a look.