Tales from the Crypt: Bordello of Blood

A wickedly funny motion picture complete with all the hackcitement anyone could axe for! Dennis Miller, stunning supermodel Angie Everhart and Erika Eleniak join every bodies' favorite cutup, the Cryptkeeper, in a hip frightmare of sly humor, sex appeal and go-for-the-juglar special effects.

Madam Lilith and her lucious cohorts run a most unusual bordello on the edge of town. They don't just take your money for services rendered-they bleed their customers dry! But wisecracking private eye Rafe Guttman is on the case, and soon he must battle not only a den of scantily clad vampiresses, but also the Reverand Jimmy Current a slick televangelist with an all-powerful talisman.

The thrills and chills come so fast you'll never know where this tale will beheading next.

'Bordello of Blood' speaks to the truth of the human condition like no other horror comedy ever has before or since. Tickling the funny bone while gently stroking the viewer's intellect, it digs deep into the soul of man and exposes his most inner dark secrets for all the world to see. Okay, so none of that is anywhere remotely true of this second installment in a planned trilogy meant to translate the 'Tales from the Crypt' series into a movie franchise. And I doubt anyone in the world would speak so highly of it. That is, unless one finds it surprising to discover the male mind is ultimately littered with nothing more than breasts, voluptuous libertine women, lots of gory action, and a treasure trove of juvenile humor. If so, then yes, this movie reveals men's most darkly held secret: they are obsessed with sex and a nice slobbering of blood and guts on the side. But, for those of us living in reality and not blinded by rose-tinted glasses, the movie is a goofy hodgepodge of silliness and nothing more.

And frankly, the story about a small-town brothel run by vampires is all the more enjoyable for not striving to be anything more than what it actually is. Again, this is a movie about a vampire whorehouse. How could anyone expect more from such a simple premise sure to attract a specific target audience with the occasional underage kid sneakily hidden in the far back row, giggling with excited over oodles of beautiful naked women. Granted, this is nowhere near as funny and entertaining as the show's first foray into feature-length features, 'Demon Knight.' It ultimately fails to muster the same level of gory humor or even maintain audience engagement with the same high-spirited energy. The script, which was co-written by director Gilbert Adler, largely feels episodic and disjointed, as if many scenes were being added and rewritten as they were filming the rest, and the editing is odd with several disordered ramblings that look as if taken from reshoots many months later.

However, what the zany scare picture lacks in competency and entertainment it makes up for in its self-awareness, coasting to the finish line with referential jabs, several amusingly quirky one-liners and its tendency for madcap absurdity, making the delightfully grisly debacle just bearable. And then for the few slobbering gawkers itching for the next boob shot, there is also much to ogle and drool at. But, while we wait for another blatantly lewd display of the female form, moviegoers have to stomach the witty, jocular stylings of Dennis Miller, which is said with all the cynical sarcasm one can imagine whilst reading the words. As the continuously acerbic and sneering private investigator Rafe Guttman, he does fine, which is about as nice a compliment I could come up. In truth, he delivers just enough derisive quips with excellent timing to make himself watchable in the lead but not enough to ever want see him do it again, and thankfully, he hasn't since. 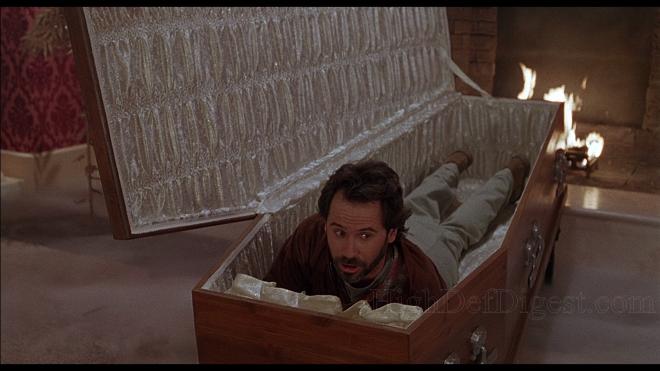 To his credit though, the character harkens back to the noir P.I.s, quick on his feet and ready with snappy comebacks that he probably memorized and stored away, waiting for just the right moment and context to blurt them out with grinning smugness. (And boy, does Miller grin a lot.) Rafe is where much of the movie's self-referential air originates from, starting with the whole "private dick" attitude, a smart-alecky tough guy hired under suspicious circumstances but soon discovers a dark, sinister underbelly that's way over his head. Employed by Catherine Verdoux (Erika Eleniak) to locate her delinquent brother Caleb (Corey Feldman), many of his asides point to several of the plot's silly concepts, such as a funeral home disguising as a brothel, breasts jokes and at one point even stating he weirdly feels as if in a 'Tales from the Crypt' episode. The mildly effective humor makes it clear the filmmakers knew what they were doing and were perfectly content making a bad B-movie.

If for nothing else, 'Bordello of Blood' should be given some credit for at least this much and then running with the gag, never apologizing or making excuses. It's a silly, raunchy good time, the sort guys watch with other guys while drinking a few beers and eating pizza. Not that a guy would ever need justification for pizza and beer, but at least, this movie adds some humor into the mix. For the more astute viewer out there, the manager of the brothel is also the "Mother of all Vampires" called Lilith (Angie Everhart having a devilishly good time in the role), a name with roots in Jewish mythology that complements Everhart's performance and the character's personality. I'd like to imagine there's some deliberateness in choosing that name and giving more weight to her inevitable showdown with televangelist J. C. Current (Chris Sarandon), another name with comical intentions, making for a pleasing enough finish. Oh, and did I mention they show lots of nudity throughout?

Shout! Factory resurrects 'Tales from the Crypt Presents Bordello of Blood' to Blu-ray as a Collector's Edition under the distributor's Scream Factory line. The Region A locked, BD50 disc is housed inside the normal blue case with brand new reversible cover art and a cardboard slipcover. At startup, viewers are taken to a screen with options along the left side, full-motion clips and music.

The vampire queen is resurrected for Blu-ray's righteous cause with a 1080p/AVC MPEG-4 encode that doesn't quite reach the level of 'Demon Knight,' which sadly isn't saying much. Nevertheless, the overall presentation is strong and offers an upgrade to previous home video editions.

Part of the problem is that much of the picture appear overly processed. Several sequences come with an odd ringing effect though it doesn't seem like the result of digital tampering or boosted contrast. Rather, I would venture a guess the folks at Shout Factory were simply given an old, dated master but did the best they could to clean the elements. Other moments fall on the softer side, much of which is due to the optical special effects and the photography style of the period. Amazingly, the transfer retains a very fine grain structure, providing a welcomed film-like appeal, and it's fairly sharp, with pleasing definition in the clothing and facial complexions can be quite revealing. Contrast and brightness are well-balanced, allowing for good clarity and visibility even the darkest portions; however, much of the video appear flat and somewhat dull with many shadows coming off a bit murky. Colors are cleanly rendered and accurate with reds and greens looking particularly bright.

Lilith is sent back to the fiery pits of hells "from whence" she came thanks to an excellent pair of DTS-HD Master Audio soundtracks — in 2.0 stereo and 5.1 surround sound. And as is often the case to the ears of this purist, the stereo track is more satisfying although the latter is sure to please many fans out there. The surrounds are very well employed throughout, delivering plenty of activity with good, discrete directionality, and the music of Chris Boardman does most of the leg work by keeping the soundfield engaging and lively. However, the front soundstage is riddled with a good amount of audible air and voices seem as though stretched across the screen, creating several moments that sound too bright and harsh to the ears, while low-frequency effects feel somewhat exaggerated and more booming than what we'd expect from a feature of this age.

On the other hand, the original stereo design while using the receiver's DSU function is ultimately the best way to enjoy some vampire brothel mayhem, generating a wide and spacious soundstage that feels more natural and appealing. With vocals crystal-clear and precise in the center, off-screen action pans across the screen with flawless movement while the mid-range maintains excellent detailing during the loudest segments. Than again, those same moments don't exactly display a wide, extensive range between the frequencies, mostly keeping to about the same decibel levels throughout. It makes for a somewhat unexciting presentation when all the action sounds about the same, and distinct differences can't be easily distinguished. Bass also appears more natural and healthier, providing the right amount of depth and punch we'd expect.

If for nothing else, 'Bordello of Blood' should be given some credit for at least a few amusing referential jabs and a couple amusing jokes from an otherwise grating Dennis Miller. However, this isn't enough to save this second installment in a planned 'Tales of the Crypt' trilogy because it's just plain bad, and a largely humorless production that's beneath the brand of the beloved TV series. Nevertheless, Scream Factory has done an admirable job with this Blu-ray edition of the movie, arriving with a strong audio and video presentation that will please most loyal fans. Supplements may not look like much, but the new half-hour, surprisingly good retrospective makes this a very tempting package, sure to entice fans to consider upgrading.

Sale Price 32.49
List Price 34.93
Buy Now
3rd Party 25.49
In Stock.
See what people are saying about this story or others
See Comments in Forum
Previous Next
Pre-Orders
Tomorrow's latest releases