Tales from the Crypt: Demon Knight

A mysterious drifter known as Brayker (William Sadler) possesses the last of seven ancient keys that hold the power to stop the forces of darkness and protect all humanity from ultimate evil. But the human race is safe only so long as Brayker can evade the demonic Collector (Billy Zane) who has gathered the other six keys.

In his obsessive quest for the key, the Collector rallies an army of ghastly cadavers against Brayker and the inhabitants of a run-down hotel. Armed with automatic weapons, sacred blood and sadistic humor, Brayker and the strong-willed Jeryline (Jada Pinkett-Smith) must lead the other guests in a gruesome battle against the Collector and his evil horde of ghouls.

In the zany, only half-serious horror comedy 'Demon Knight,' the show doesn't really commence until Billy Zane, who for the first ten minutes dons a cowboy getup that makes him look like the leader of a posse, suddenly doffs the silly giddy-up garb and lets loose his true inner freak. Up to that point, the story seemed a fixed cops-and-robbers mystery, but Zane revealing he is, in fact, an irked, wisecracking demon turns the whole event into outrageous hilarity. Looking back at the movie twenty years later, this particular moment is ironically noteworthy because it not only works narratively as the script's catalyst but also as an opportunity for the actor to broadcast his talents as a wry, flippant prankster. Prior to his memorable performance as The Collector, a role for which he continues to be best remembered by many to this day, Zane was arguably best known as the villain in 'Dead Calm' and for his appearances in the first two 'Back to the Future' films, 'Tombstone' and as John Wheeler in 'Twin Peaks.' And there's also the fact audiences would see him for the first time without hair, which is now his trademark look.

This scene, in which he bleeds fluorescent green goo and splatters it on the ground outside a decommissioned church to raise an army of ghoulishly demonic freaks, can be enjoyed today as a turning point in Zane's career, one where he's given free reign to be at his silliest, most sarcastic and more importantly as the top-billing headliner. And why not? He's fantastic as some undisclosed head-honcho demon, spitting smart-alecky remarks and facetious quips with the sort of forked tongue swiftness we'd expect from such a boastful, egomaniacal narcissist. In a movie with a large ensemble cast that includes Dick Miller, Jada Pinkett Smith and Thomas Haden Church, we want our an evil conjurer to stand out from the rest and be equal to William Sadler's "The Chosen One" hero, who we already know is ultimately destined to defeat the demon horde. And Zane not only does that with effortless magnetism and charm, but he outshines them all, commandeering the spotlight as some sort of darkly twisted genie — Zane's words — and becoming the whole reason for watching. 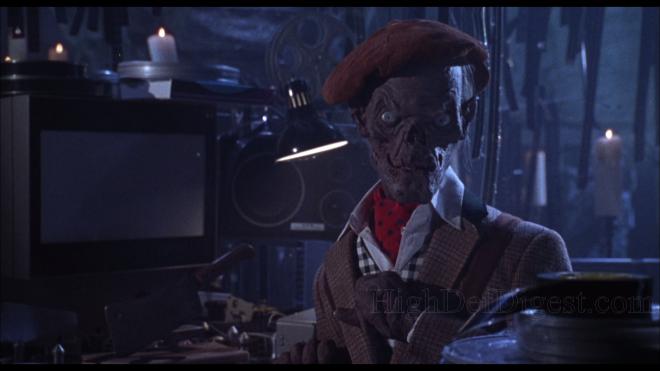 Of course, that's not to suggest the rest of the cast is forgettable or any less memorable. For cult B-movie enthusiasts, Miller is another highlight as the town's local drunk Uncle Willy, a kindly old codger who never shies away from a stranger's company and indulges in the occasional temptations of the bottle and wicked thoughts. In all honesty, Sadler isn't particularly notable as the lone stranger Brayker, but the character actor is nonetheless good as the ruggedly tenacious immortal guardian of a sacred, blood-filled key, which is the reason for Zane's demon creating hellish pandemonium. And to be fair, his steely-eyed leadership is ultimately for the purpose of passing on the torch to Pinkett Smith's jaded and bitterly angry work-release convict Jeryline, whose tough exterior hiding a self-doubting, fearful woman allows for a nice turn of events in the third act. Haden Church does a great job of making the audience despise his cowardly misogynist jerk Roach, satisfying the comeuppance theme expected from The Tales from the Crypt cable series. Rounding out the cast is C.C.H. Pounder as the owner of the church turned boarding house, Brenda Bakke as the heart-of-gold prostitute and Charles Fleischer as the lonely, misunderstood postal clerk.

In truth, each of the characters, including the take-command sheriff (John Schuck), his bumbling deputy (Gary Farmer) and the wandering orphan needing to be protected (Ryan O'Donohue), are really only playing various personality stereotypes and familiar tropes, which is all part of the intentional fun. Director Ernest Dickerson, best known for his cinematography collaborations with Spike Lee, instills the delectably gruesome gory visuals of creature creator Todd Masters with a tongue-in-cheek deliberateness while the script throws in knowingly absurd jabs at its own logic. If viewers are not laughing at the over-the-top bloodletting, lurid violence and excessive carnage, then Zane should at least bring a few chuckles and smiles, especially when clownishly remarking about some of the plot's more cockamamie aspects. By purposely calling attention to the many implausible plot developments and Zane's demon self-deprecatingly pointing out the script's narrative flaws, the filmmakers smartly defy any moviegoer's harsh judgment, laughingly and proudly announcing they are perfectly content with making a low-grade feature of B-movie proportions.

Shout! Factory beckons 'Tales from the Crypt Presents Demon Knight' to Blu-ray as a Collector's Edition under the distributor's Scream Factory line. The Region A locked, BD50 disc is housed inside the normal blue case with brand new reversible cover art and a cardboard slipcover. At startup, the disc goes to a menu screen with options along the left side while full-motion clips and music plays in the background.

The Crypt Keeper summons 'Demon Knight' from the B-movie depths and dresses it with a great AVC-encoded transfer that easily surpasses previous home video releases. The presentation may not be much of a looker at the start, looking pretty blurry and poorly resolved. Several other softer sequences remind viewers the movie is now celebrating twenty years of roaming for the key, with the worst moments coming from the optical effects and the composite shots. Understandably, these scenes are forgiven as products of their time because the rest of the elements appear to have aged quite well. Then again, contrast seems to run hotter than normal throughout, making the highlights bloom and create some mild posterization.

Still, the picture is comfortably bright and fairly well-balanced, allowing for excellent detailing for much of the runtime. Facial complexions appear natural and revealing while overall definition of the finer lines is distinct, even during the darkest, poorly-lit sequences, which is pretty much the entirety of the movie. Brightness levels are accurate, and colors are cleanly rendered with the primaries looking particularly bold and animated. With a consistently thin but quite visible layer of grain from start to finish, the 1.85:1 image arrives with an appreciable film-like quality loyal fans will surely love.

Billy Zane and his horde of demon monstrosities descend upon the decommissioned church with a pair of DTS-HD Master Audio soundtracks — in 2.0 stereo and 5.1 surround sound. And as is per usual, the former better satisfies the ears of this purest although the latter is actually not half bad with decent directionality and activity in the rears. Most of the time, it's the musical score that spreads into the back speakers and maintains a satisfying soundfield. However, the front soundstage can at times feel as though stretched thin and comes off much too bright during the many loud action scenes while the low bass seems much louder and aggressive than is normal for a movie of this age.

By far, the better of the two is the original stereo design, which creates an actively engaging and expansive soundstage while lending itself nicely to the receiver's DSU function. Dialogue is well-prioritized with excellent channel separation and balance. Off-screen effects are convincing, and movement between the fronts and sides is flawless. The mid-range exhibits crystal-clear clarity and exceptional detailing in the upper frequencies. This is most apparent during sequences with music, action and ear-piercing thunder where we can clearly make out each individual sound with very little strain. The low-end is healthier and more appropriate, providing the lossless mix with appreciable weight and a great sense of depth.

In the zany, only half-serious horror-comedy spinoff of the classic cable TV series Tales from the Crypt, Billy Zane turns in one of his most memorable performances as the irked, jesting 'Demon Knight.' In a movie with an ensemble cast that includes Dick Miller, Jada Pinkett Smith and Thomas Haden Church, Zane is a standout in this knowingly fun and deliberately over-the-top B-picture absurdity. The Blu-ray arrives with an excellent audio and video presentation that surpasses previous home video releases, and with a small but amusing set of supplements, this Collector's Edition from Scream Factory is sure to please loyal followers who've waited patiently for the return of The Collector's wisecracks.

Sale Price 19.3
Buy Now
3rd Party 22.51
In Stock.
See what people are saying about this story or others
See Comments in Forum
Previous Next
Pre-Orders
Tomorrow's latest releases