Now that Mac (Seth Rogen) and Kelly Radner (Rose Byrne) have a second baby on the way, they are ready to make the final move into adulthood: the suburbs. But just as they thought they'd reclaimed the neighborhood and were safe to sell, they learn that the new occupants next door are a hard–partying, out-of-control sorority, led by Shelby (Chloe Grace Moretz). Mac and Kelly are forced to team up with their charismatic ex-neighbor and nowsecret weapon, Teddy (Zac Efron), since the ladies of Kappa Nu aren't going down without a fight. It's parenthood vs. sisterhood when the new neighbors assert their right to party just as hard as the boys.

If the box office receipts weren't enough to tell people that the summer of 2016 was a pretty rough season, all you have to do is look at the slate of releases. Few films brought in big audiences as they were intended, and even fewer big blockbusters managed to make back their bloated production budgets. But big blockbusters weren't the only underachievers, smaller comedies, and dramas designed to pull in summer moviegoers looking for a break from superheroes and invading aliens failed to ignite. One of these films that failed to live up to expectations was the woefully unnecessary 'Neighbors 2.' While the first film was hardly an example of witty dialogue and comedic hijinks, it was at the very least, good for a laugh or two. This sequel, on the other hand, struggles to find a purpose for existence and when it can't do something clever and unique, it falls back on crude uncomfortably unfunny base humor to try and eke out any noise resembling a laugh.

Mac (Seth Rogen) and Kelly (Rose Byrne) somehow managed to survive the partying wrath of Teddy Sanders (Zac Efron), his buddy Pete (Dave Franco) and the rest of their fraternity. The neighborhood has been quiet for a long time now. Their little daughter Stella (Elise Vargas) is getting older, talking, and getting into mommy and daddy's assortment of "personal items." When the Radner family learn there is another little one on the way, they decide it's time to kick off to the suburbs. All they have to do is sell their house. With their current home in escrow, they just have to keep things clean and neat and quiet for the next 30 days and then their prospective buyers can't back out.

Unfortunately for the Radners, things aren't going to be that easy. College girls Shelby (Chloë Grace Moretz), Beth (Kiersey Clemons), and the brash Nora (Beanie Feldstein) are starting their own off-campus sorority, Kappa Nu. The only place they could party it up, get high, or drink as a sorority without having to go to frat houses makes the empty rental property next to the Radners very appealing. But how are they going to start their own sorority and be able to pay rent? Teddy Sanders may have some ideas about that! As Teddy has been forced to move out of his own apartment because Pete is getting married, Teddy decides to take these young ladies under his wing and guide them to sorority party glory. When their partying ways run afoul of the Radners, the battle for the neighborhood turns into all out war. 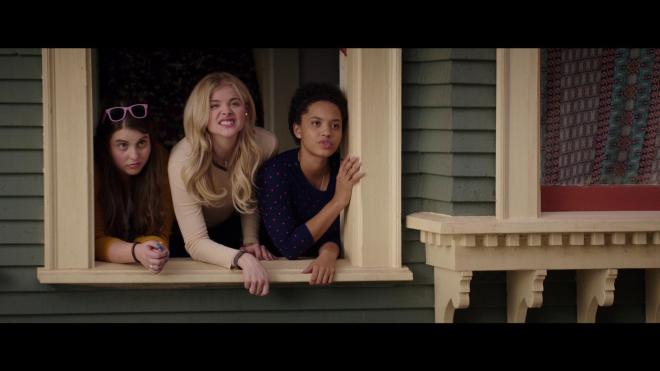 The opening awkward sex scene between Seth Rogen and Rose Byrne is pretty much the perfect litmus test for audiences. If you think you can withstand the barrage of body fluid humor after Byrne throws up on Rogen's face while having romantic relations, well, then I think 'Neighbors 2' is right up your alley. Because in all honesty, these moments involving vomit, fecal matter, and used tampons as projectiles are just about the only sources of humor for this contrived and desperate comedy. Considering the success 'Neighbors' was in 2014, one really shouldn't have been too surprised by the presence of this sequel. After all, in Hollywood, the mindset is "if it worked once, let's do it again and if that fails we'll do it ten more times." To put it simply, there is no reason for this film to exist beyond milking more cash out of the scenario. On top of that, it half-heartedly tries to force a statement about male and female equality by making the girls just as gross and disgusting as the guys - if not worse in many instances. The problem is this isn't the sort of statement that should be made. Is "we can be just as vile and gross as frat boys" really the kind of female empowerment statement we should be celebrating? I never really went in for "bro" humor to begin with so it's even more difficult to sit through a move so intent on lowering an already bottomed-out bar.

While Chloë Grace Moretz and Kiersey Clemons offer some fun and Beanie Feldstein provides a couple damn hilarious moments, the rest of the film feels forced and trite. Rogen and Byrne are just going through the moments and Effron just looks bored. I've never been much of a fan of sequels to comedies, especially when all they're doing is the same film all over again with only a little tweak here and there. The well for 'Neighbors' was never very deep to begin with and by the time the main plot of this film gets going, it'd long gone dry. I wasn't much of a fan of the first film, it was a one and done viewing as I thought it was funny but not enough to warrant a second viewing. Nicholas Stoller is a creative and energetic director and so at the very least, his movies have been somewhat entertaining. Here, along with co-writers Andrew Jay Cohen, Brendan O'Brien, Evan Goldberg, and Seth Rogen, Stoller just feels like a creative force that ran out of energy. Perhaps he spent it all on the upcoming 'Storks' and just had nothing left in the tank for this one? While 'Neighbors' had some funny moments, the "Batman off" still makes me laugh as a comic nerd, 'Neighbors 2' doesn't offer anything nearly as strong. It's just one awkward contrived joke setup after another and when that joke fails to stick the landing some random body fluids pop up because that's all that's left to laugh at. I already had pretty low expectations going in to 'Neighbors 2' and this movie didn't even measure up to that benchmark. Just another lame unnecessary sequel in a summer stuffed full of them.

'Neighbors 2' arrives on Blu-ray courtesy of Universal Home Video in a two-disc Blu-ray and DVD set. Pressed onto a BD50 disc, the disc is housed in a standard 2-disc Blu-ray case with identical artwork. The Disc opens with trailers for upcoming Universal releases before arriving at a static image main menu with traditional navigation options. Also included with this set is an Ultraviolet Digital HD voucher slip.

'Neighbors 2' moves in with a solid 2.40:1 1080p transfer. Digitally sourced, this image is sparkling clean and clear and lets the audience revel in all of the grotesque bodily fluid detail. Colors are bright and beautiful with warm and natural primaries. The color scheme favors golden yellows and earth tones to nail down that quintessential average American neighborhood look, but thankfully flesh tones aren't affected. Black levels are rich and inky throughout most of the film. Some of the night time party sequences use a lot of black light and other lighting effects and can lose a bit of depth, but otherwise black levels and shadows provide a strong sense of three-dimensional depth through most scenes. During the big tailgating action scene some handheld cameras were used while the camera operator tooled around on rollerblades. During these few brief moments, the image can look a little noisy and some motion blur creeps in, but the rest of the movie looks just fine.

'Neighbors 2' also comes packed with an aggressive English DTS-HD MA 5.1 audio mix. Dialogue comes through just fine throughout most of the film and keeps to the front/center channels. Where the track can get a bit iffy is during the several party scenes as dialogue can be drowned out by the background music. The background party music feels mixed a bit too loud so it's kind of irritating to have to turn the volume up to hear what people are saying when the moment is already really loud. Granted, these bits of dialogue aren't always important, but still, when you're watching this movie at 11:00 at night like I did, you run the risk of irritating your own neighbors. Imaging is pretty standard for a comedy like this. There is plenty of channel movement but nothing altogether spectacular. Levels, like I said, may need some adjusting here and there, but overall the mix is pretty even. All around this is a solid audio track that serves the brash nature of the film.

Audio Commentary: Writer/Director Nicholas Stoller and Producer James Weaver provide a pretty decent commentary for this film. If you're at all interested in this feature, the main highlight is hearing them talk about their approach to making a sequel to a comedy.

Deleted Scenes: (HD 24:14) This movie already felt long at 93 minutes, it's amazing there are this many deleted scenes. Some of it tries to be meaningful, but it's also accompanied with some really bad jokes.

Nu Neighbors: (HD 8:09) This is a pretty typical EPK bonus feature with cast and crew interviews.

The Prodigal Bros Return: (HD 5:01) This is a pretty standard cast interview extra feature with all of the guys from the first film.

The Ultimate Tailgate: (HD 5:09) This is a pretty fun look at the big "action sequence" of the film.

I wasn't really much of a fan of 'Neighbors' when I first saw it and never really felt compelled to see it again. After watching 'Neighbors 2,' the chances of me seeing the first one again are even less likely. I just didn't like this movie. I'm willing to chalk it up to not being my brand of humor but even for gross-out humor this movie was pretty nasty. Universal brings 'Neighbors 2' to Blu-ray with a rock solid A/V presentation and a decent assortment of bonus features. If you were a fan of the first film, this one may be worth checking out. If you didn't like the first there's nothing here to change your mind. If you must see it, I'd say give it a rent first. Try before you buy is a good mindset to be in.

Sale Price 6.2
List Price 14.98
Buy Now
3rd Party 8.21
In Stock.
See what people are saying about this story or others
See Comments in Forum
Previous Next
Pre-Orders
Tomorrow's latest releases