By all appearances, new parents Mac (Seth Rogen) and Kelly Radner (Rose Byrne) are living the American Dream, complete with an adorable baby girl and a beautiful new starter home in the suburbs. Still, the early-thirtysomethings want to believe that they have a modicum of coolness left within them. So when they discover that their new next-door neighbors are none other than dozens of Delta Psi Beta fraternity brothers led by charismatic president Teddy Sanders (Zac Efron), they try to play along and make the best of an awkward situation. But when the frat's parties grow increasingly more epic, both sides of the property line begin to fend for their turf. The neighbors' relentless sabotage escalates into outrageous one-upmanship, beginning an epic Greek war for the ages.

For all intents and purposes, Seth Rogen has made a career out of being immature. From his breakthrough role as a tatted-up twentysomething in 'The 40-Year-Old Virgin' to the youth-approval-seeking negligence of a rookie cop in 'Superbad,' and even (or perhaps especially) the meta commentary on fame and his own Hollywood persona in 'This is the End,' Rogen's characters exude a unique kind of irresponsibility that renders them likeable, in spite of their seemingly stunted maturity.

That particular formula has worked so well for him so often, it seems like the good times might never end. But Rogen's creative instincts as a writer, director, and actor are usually quite savvy (take for instance his roles in the dark and bizarre 'Observe and Report' or the sexually frank 'Take This Waltz'), and his role in 'Neighbors' – which he also produced – helps prove that in a way that is different without steering violently against type.

Directed by Nicholas Stoller ('Forgetting Sarah Marshall' and 'The Five-Year Engagement'), 'Neighbors' is a raucous comedy the likes of which Rogen's fanbase will be very familiar with. What makes it more than a juvenile back and forth between a group of beer-swilling, testosterone-charged frat boys led by the oft-shirtless Zac Efron and the nascent suburbanite couple next door is the way the film explores the very Peter Pan complex on which Rogen's career is grounded, and how it understands that, as a narrative device as well as an actual way of life, the antics of perpetual immaturity often return to a well destined to run dry.

As such, the throughline of the otherwise simple plot, in which the two houses find themselves at war with one another, becomes more about two seemingly disparate groups of young people unknowingly at war with their own encroaching adulthood. 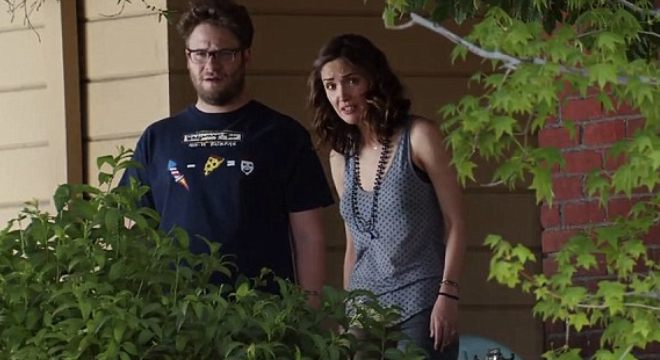 Rogen stars as Mac Radner, an early-thirtysomething embarking on a journey with his wife Kelly (Rose Byrne) into the expectations parenthood, suburbia, and the American Dream. There is a quiet sterility to their life that is obviously more frightening to them than the demanding prospects of being parents. This is exemplified in Mac's efforts to smoke weed at work with his buddy Jimmy (Ike Barinholtz of 'The Mindy Project'), and the dire boredom Kelly faces on a daily basis when Mac leaves for work.

Beyond the four walls of their suburban starter home, the young couple acts with the pretense of reliable adults, responding gleefully to the prospect of a gay family moving into the vacant house next door. And yet the fiction they have created for themselves – that they are, in fact, responsible individuals ready to take on the challenges of adulthood – is quickly dispelled when Efron's Teddy turns the house next door into the Delta Psi Beta fraternity. For Mac and Kelly, the omnipresent threat of loud, obtrusive frat parties is as objectionable as the idea that they have become the obnoxious old people looking to ruin everyone else's good time.

The paradox created by Mac and Kelly's situation and unspoken desires to refuse the responsibilities of adulthood gives 'Neighbors' a surprising depth it otherwise wouldn't have had. The film could easily have ridden to success on the odd couple pairing of Rogen and Efron – which doesn't require them to take their shirts off in order for the comparison to be funny, but it certainly doesn't hurt when they do – and yet the script by Andrew Jay Cohen and Brendan O'Brien – for whatever other faults it may have – takes things further by illustrating and zeroing in on the internal conflict of those faced with the never-ending responsibilities of parent and adulthood, especially when the pleasures of youth are so readily available right next door.

And that is primarily how 'Neighbors' defines its conflict. On the surface it is a battle between two diametrically opposed groups of people, but the trick is in the way the film reveals how they're not that different from one another at all. In fact, the only thing keeping Mac and Kelly from partying with the brothers of Delta Psi Beta – which includes Dave Franco in his best performance to date, Christopher Mintz-Plasse, and the very funny Jerrod Carmichael – is the societal expectations that come from being a parent and having existed on the planet for longer than three decades.

Along with Mac and Kelly's attempts to grapple with adulthood, 'Neighbors' is also free to utilize the would-be antagonists of the film in an unexpected way. As fraternity president, Teddy is preoccupied with having a good time, drinking, and having his final year in college memorialized by throwing an epic party worthy of the house's enormous party plaque. But through his conflict with Mac and Kelly, Teddy becomes increasingly aware of the future that awaits him, and the fact that it is not necessarily a bright one.

Amidst all the filthy humor, and the revenge-based plotting between the brothers of Delta Psi Beta and the Radners, the narrative carries a strange but effective weight that suggests the freedom of immaturity and youth needs to be appreciated in the moment, as it will vanish in the blink of an eye. In that sense, the film's biggest and funniest visual gag of the fraternity turning Mac and Kelly's airbags into booby traps turns into an apt metaphor for the lack of security some have in terms of the impending collision with the realities of adulthood.

To the film's credit, it constantly aims to be more than the simple binary of young versus old; it plays with convention by introducing interesting departures from archetypes, which is perhaps best illustrated in Mac and Kelly's confrontation about gender expectations when it comes to accepting the responsibilities of being a mature individual. The worrisome mundanity of adulthood may seem like it is no laughing matter, but 'Neighbors' succeeds in dispelling the dreariness of maturity by questioning the value of perpetual immaturity. 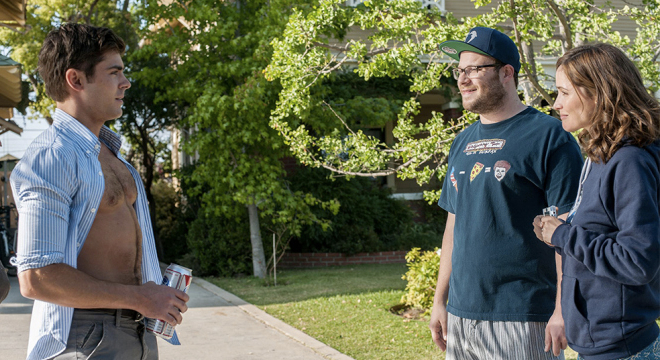 'Neighbors' comes from Universal Home Entertainment as a 50GB Blu-ray disc + DVD + Digital Download in the standard two-disc keepcase. The Blu-ray offers additional extras that the DVD doesn't – in case you were wondering how a DVD could be made even more superfluous than it already is.

'Neighbors' comes with a gorgeous 1080p AVC/MPEG-4 encoded transfer, giving viewers a strong image that is consistently filled with fine detail in everything from facial features to clothing textures to background elements. The overall image is bright, which helps to showcase the level of fine detail that is on display, but not so bright that the picture appears sterile.

Party sequences are handled nicely, as the image is frequently awash in bright colors, accentuated by the obligatory black light college party that brings offers a series of interesting highlights that augment the overall look and feel of the film without drastically altering its otherwise sensible palette. Contrast also plays a large role during the party scenes by making sure shadows produce an inky blackness that is free from banding or crush, while also keeping other elements from looking blown out or too hot. The same can be said for the day and nighttime sequences that don't involve crowded interiors or neon colors.

Overall, although the look and feel of the film is fairly basic and straightforward, the clarity and precision of the image elevates it and makes it one of the nicest releases from Universal this year.

Even though this is a situation comedy that relies primarily on dialogue, the DTS-HD Master Audio 5.1 mix is routinely put through its paces. For starters, dialogue sounds very good throughout; it is clear and distinct and is generally balanced rather well during loud party scenes as well as any moment that is underlined with music in one form or another. Along with the balance is a good but not great sense of directionality that can help enhance certain moments, but occasionally feels as though it has lost the focal point.

Atmosphere strongly favors the party sequences, where plenty of ambient noise can be detected throughout the channels, but there are some subtle moments throughout the film that make for a surprisingly immersive listening experience. Rear channels manage to capture some of the muffled noises of frat boys hanging outside the Radners' living room window, giving a greater sense of the invasion the protagonists are dealing with. LFE helps to enhance all the party sequences as well, by giving the throbbing bass some additional power that is also nicely present during the final confrontation between Rogen and Efron.

This is a strong audio mix that enhances the feel of the film with some great sounding music and atmospheric effects.

An Unlikely Pair (HD, 6 min.) – Rogen, Efron, and a handful of other actors discuss the odd chemistry of the leading men and why seeing them on-screen together is so funny.

Partying With Neighbors (HD, 7 min.) – A closer look at the party sequences of the film.

'Neighbors' was one of the biggest hits of the summer and certainly one of the funniest, but in addition to being very funny, the film takes a smart, well-rounded look at the similarities experienced by the characters, despite their more obvious differences. While it feels as though some of the characters get short shrift in terms of arcs or development, the film helps to adjust for those faults by breaking with archetypes in a way that helps make those characters less stereotypical or perfunctory. With great image, good audio, and some fun extras (that really could have used a commentary) 'Neighbors' comes recommended.

Sale Price 3.86
List Price 10.55
Buy Now
3rd Party 9.99
In Stock.
See what people are saying about this story or others
See Comments in Forum
Previous Next
Pre-Orders
Tomorrow's latest releases