Bruce Campbell reprises his role as Ash, the stock boy, aging lothario and chainsaw-handed monster hunter who has spent the last 30 years avoiding responsibility, maturity and the terrors of the Evil Dead. When a Deadite plague threatens to destroy all of mankind, Ash is finally forced to face his demons - personal and literal. Destiny, it turns out, has no plans to release the unlikely hero from its Evil grip.

The cast also includes Lucy Lawless as Ruby (Parks and Recreation, Spartacus franchise, Battlestar Galactica, Xena: Warrior Princess), a mysterious figure who believes Ash is the cause of the Evil outbreaks, Ray Santiago as Pablo Simon Bolivar (In Time, Raising Hope, Dexter, Meet the Fockers), an idealistic immigrant who becomes Ash's loyal sidekick, Dana DeLorenzo as Kelly Maxwell (Impress Me, A Very Harold & Kumar 3D Christmas), a moody wild child trying to outrun her past and Jill Marie Jones as Amanda Fisher (Sleepy Hollow, Girlfriends), a disgraced Michigan State Trooper set to find our anti-hero Ash and prove his responsibility in the grisly murder of her partner. 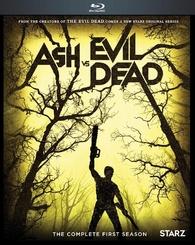 Ever since the mid 90s, which was when I was introduced to Bruce Campbell and ‘Army of Darkness‘, I’ve chosen to live a life that has both of these elements in them. I have a variety of artwork, books, props, and every home video release of the ‘Evil Dead‘ trilogy sitting on my shelf, not to mention clothing and other movie artifacts. I even named my comic book store and media outlet ‘Boomstick Comics‘, which you might have visited. Needless to say, this movie franchise has definitely had a profound effect on me.

After ‘Army of Darkness‘ came out more than twenty years ago, each and every Bruce Campbell and ‘Evil Dead‘ fan have asked about a fourth installment. It became a running joke at Q&A’s and comic book conventions, in that Bruce would get up and introduce himself, followed by a statement that said, ‘Don’t ask about ‘Evil Dead 4‘, because it’s not happening. This went on for a number of years, until the studio wanted to remake ‘The Evil Dead’ back in 2013. Unfortunately, this was a remake that featured a similar story line, but none of the previous characters or crew, although Bruce, Sam Raimi, and Rob Tapert were all heavy handed producers.

The 2013 ‘Evil Dead‘ was actually pretty damn good, full of horror and blood, and stood on its own, but there was definitely something missing. It was the wit, charm, and silliness of Raimi and Campbell that made the original trilogy so memorable, which transformed into one of the biggest cult classics ever to be put on the big screen. Still, there was no word on Bruce reprising his role as Ash for a sequel, until about a year ago, where Starz made a deal with Bruce, Raimi, and Rob to create a sequel in the form of a TV series, called ‘Ash vs. Evil Dead‘, which would feature an older Ash again fighting the demons.

If you’re like me, and you loved the ‘Evil Dead‘ films along with the impressive ‘Army of Darkness‘, you should have a certain expectation set for this new series. There has to be a perfect balance of comedy, horror, and gore to make this show work like the films did, which is fairly difficult work. I’m here today to tell you that whatever expectations you had for this series have not only been met, but have been exceeded to the tenth degree. Any fan of the films will be more than happy with this series, at least with this first episode, as it covers all of its basis. We get the throwbacks to the old films, a bit of updating on what’s been going on with Ash for the past thirty years, gore, new characters, and a ton of laughs and brilliant moments where all your stored up geek rage and joy for ‘The Evil Dead‘ will be released upon the world.

This first episode is titled ‘El Jefe‘ and starts out with Ash getting himself together (with one hand) to go out in his small town. His reason for going out is simple. Drink and have sex with whoever is closest to him at the bar. During the day he still works at an ‘S-Mart’ type of place, where he still isn’t clearly the manager. At least one of the younger people look up to him, named Pablo (Ray Santiago). Soon enough though, Ash starts getting visions of deadites and is clearly spooked about it.

Meanwhile, a local state trooper named Amanda (Jill Marie Jones), responds to a call at a house where she comes in contact with some deadites first hand (no pun intended), which tells us, this evil is back in a big way. It soon makes its way to find Ash, which is where we see Ash suffer from a bit of PTSD after all of these years. Don’t worry though, it only lasts a couple of seconds, before he is opening trap doors for guns, knives, and a chainsaw, and effortlessly takes out any bad guy with the help of his co-worker Pablo. This first episode is a huge set up for what’s to come and only makes you scream louder with joy that you want to see more.

Sam Raimi directed this pilot episode, and every intense camera moment is spot on, and on par with the last three films. It’s classic Sam Raimi. Not only that, Bruce has tons of great one-liners, and there are several easter eggs from the other films that make it into this first episode. I’ve never had so much fun watching a television show in my life. The gore is 100% there. Part of it is CG, which definitely looks fake, however about 80% of the gore is real, practical, and thrown at full force on the actors. It was fantastic to see this return to form for Sam and Bruce again here. You’ll love this show even if you’ve never seen the movies before, and that is indeed ‘Groovy’!

'Ash vs Evil Dead' Season One comes with two 50GB Blu-ray Discs from Starz/Anchor Bay and are Region A Locked. There is no digital download code insert here, but there is an insert of promos for other Starz series. The discs are housed in a hard, blue plastic cast with a cardboard sleeve. 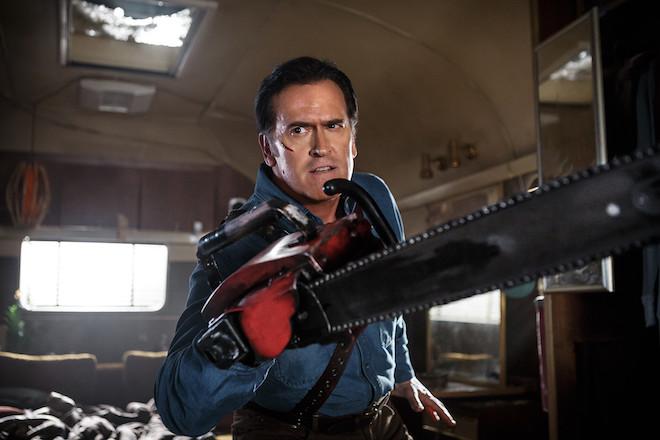 'Ash vs. Evil Dead' Season One comes with a great 1080p HD transfer and is presented in 1.78:1 aspect ratio. The image here looks great on all levels. We are used to our 'Evil Dead' movies coming with a very filmic look with tons of debris, dirt, warps, and an overall very aged look. That is not the case here with this new TV series from Starz. This is a digitally shot show and looks very crisp, clean, and clear.

Detail is very sharp throughout, even in the darker lit scenes. Closeups reveal every scar and chin hair on Ash's face, as well as all the gory and excellent practical makeup effects on all the deadites, not to mention the other actor's faces. Every crease and fold in the guts and intestines also stand out nicely. Wider shots are smooth as well and never soft, even in the darker scenes. Colors are fairly bright and vibrant throughout, even though there are warmer colors in the interiors.

Ash's blue denim button down shirt pops as does every tiny ounce of blood. It looks fantastic. Black levels are deep and inky and the flesh tones are natural on the living. All this being said, the video noise is prominent and sticks out like a sore thumb in almost every episode. Other than that problem, there is no other issue with this video presentation, leaving it with high marks. 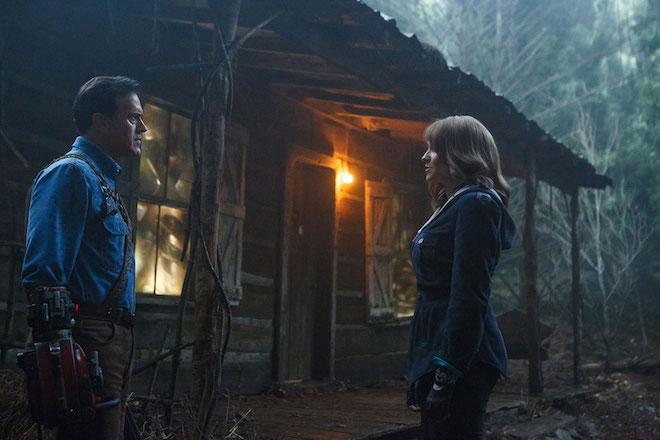 This release comes with a perfect Dolby TrueHD 7.1 mix, which might be one of the best audio presentations on Blu-ray. With all of the gun blasts, stabs, swings, chops, and screams in this show, the sound design has perfectly balanced each sound effect and ambient sound that never feels overly-done or underwhelming. It simply is perfect.

When Ash revs his chainsaw, you'll every mechanic and chain clink as it hits the various targets, whether it be flesh or another object. The boomstick blasts are forceful and pack a great punch that has quite a bit of bass that will rumble you to your core. The evil that zooms past cars and people is a really immersive experience with all speakers coming full force to make you think that you are about to become a deadite yourself. Ambient noises of nature and people chatting in bars or on the street are well balanced at all times.

The music is full of energy and always adds to the suspense and comedy of each situation. All of these sounds have great directionality as well. The dialogue is always crystal clear and easy to follow, even with all of the carnage that is being displayed on screen. Furthermore, there are no instances of any pops, cracks, hiss, or high shrills. This audio presentation is one of the best I've heard. 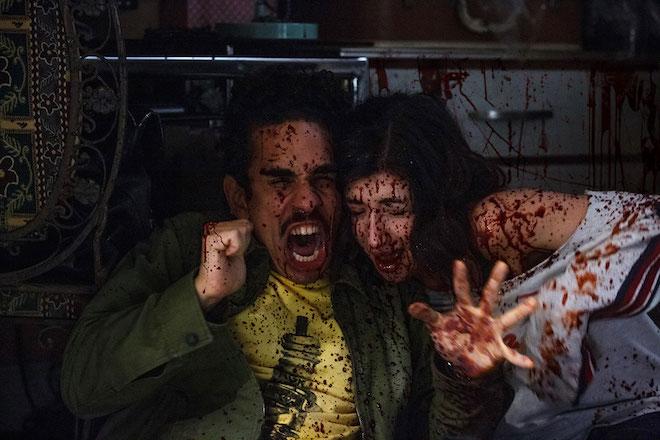 Audio Commentaries - Every episode has an excellent commentary track with the cast and crew. Bruce Campbell lends his iconic and hilarious commentaries to eight of the ten episodes. Everyone discusses coming back to the franchise, the gore, the blood, the story, and fun anecdotes from set. Sam Raimi and Ivan Raimi even show up here. All of these are a must-listen.

Ash Inside the World (HD, 16 Mins.) - This is a great and energetic bonus feature that looks through each episode of the first season, touching upon all aspects of making the show, from gore, to the actors, to the script, and more.

Best of Ash (HD, 2 Mins.) - A quick montage of Bruce Campbell's best moments from season one. 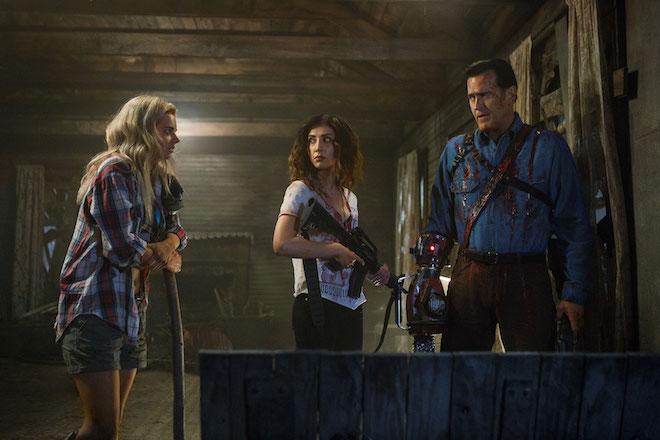 'Ash vs Evil Dead' nails every aspect of the show. Fans have been clamoring for years and years for Bruce Campbell to come back and reprise his role of Ash and kill deadites. After many times of being told "no", the powers that be got together and greenlit a sequel to the 'Evil Dead' films. We didn't get just a two hour movie sequel, we got a big ass television show that might last seven seasons. The big names involved all came back to make the series, including Sam Raimi, Ivan Raimi, Bruce Campbell, and Rob Tapert. The gore, acting, script, story, and characters are all just so perfect and blend in with what we have fans have wanted for years. Not to mention, it has opened up a new world for a new generation to experience all that is 'Evil Dead' and Bruce Campbell. The video presentation looks excellent and the audio presentation is probably one of the best mixes I've ever heard. Plus, you get the legendary Bruce Campbell commentary here on most episodes and a bit of behind the scenes features. Must-Own!