Forced to lead a makeshift Dark Ages army against the demonic Deadites, who possess all the deadly magic of hell, the shotgun-toting, chainsaw-armed, reluctant 20th century time traveler Ash must save the living from the dead, rescue his medieval girlfriend and get back to his own time.

It's not often you mention slapstick and horror in the same sentence when describing a movie. Rarer still is it to find a plot that incorporates Medieval knights, ancient warfare, an army of demons, and a horde of zombies. Oh, and what about a hero who works in the housewares section of a Kmart knockoff? 'Army of Darkness' has all these elements and manages to turn them into a gloriously loony and hilarious travesty. This final installment in the 'Evil Dead' series (which also produced a comic book franchise) relies more on humor than the previous two, and it succeeds thanks to Bruce Campbell's comic timing and some imaginative visual special effects.

The movie starts with a brief recap of the events from 'Evil Dead II,' only now the girlfriend is played by Bridget Fonda in the best performance of her career. All two minutes of it. Using the wild, frenetic camera movements director Sam Raimi is known for, Ash's (Campbell) first encounter with the Book of the Dead ends with him being sucked through a portal. Later, we find our one-handed hero landing in the Middle Ages --- his Oldsmobile in tow. Captured by Lord Arthur (Marcus Gilbert), he is sentenced to death as one of Duke Henry's men. Amidst this chaos, Ash makes good use of his dimwitted, fast-talking, machismo-dripping signature style, while attempting to win the sort of this alternate world's primitive people.

It's not until after he defeats two pit monsters with his modified-chainsaw appendage and "S-mart's top of the line" Remington shotgun (or "boomstick"), which conveniently never runs out of ammo, that he gains the people's trust. Afterwards, a Wiseman (Ian Abercrombie), looking like a Gandalf the Grey reject, explains that Ash must retrieve the Necronomicon if he wishes to return home. But being the dimwitted hero he's made out to be, lines are forgotten and words mispronounced, awakening the Army of Darkness instead. What ensues is fairly routine material, but still works well, as long as Ash keeps his flip remarks coming. 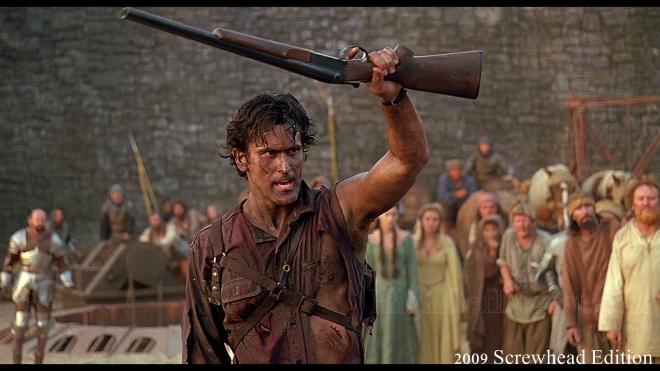 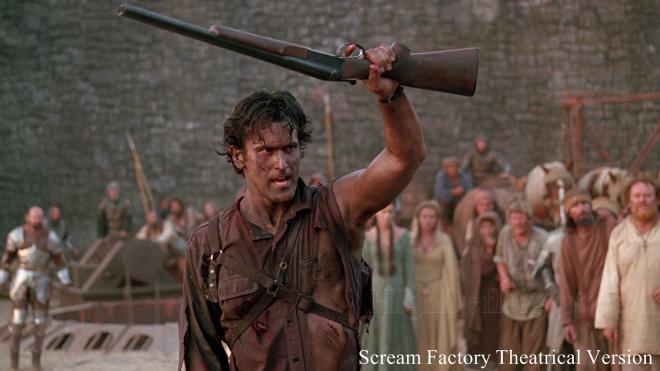 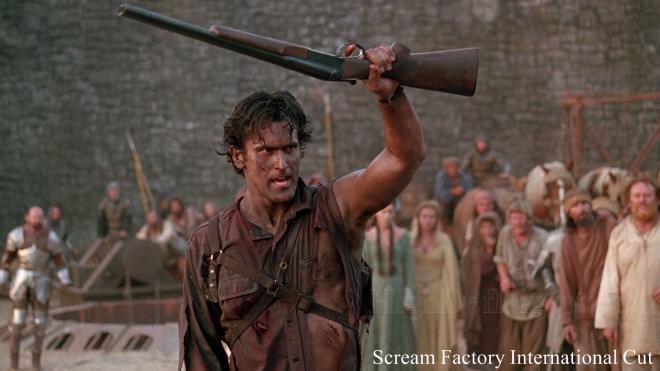 As if given full rein to create the most ridiculous and outlandish comic book ever, Sam Raimi devises a boisterous story that blends clownish incompetency with amplified manly heroics. (Editor's Note: Sadly, he used this same technique when writing the script for Spider-Man 3.) It's a smorgasbord of the popular director's wildest childhood inventions, full of medieval magic and fantasy, horror and tasteless violence, as well as a celebration of The Three Stooges. Even Bruce Campbell, quite possibly the most underrated physical comedian of our time, in all his swagger and chin-action looks chiseled straight out of the comics, while employing just enough magnetism to win us over, along with the film's damsels in distress.

The oddball, campy masterpiece that combines Twain's A Connecticut Yankee in King Arthur's Court and Swift's Gulliver's Travels is a hyperactive and fun-as-hell addition to the horror genre. The special effects team led by Gregory Nicotero, Bob Kurtzman and Howard Berger spice things up with props and visual optics that look like Ray Harryhausen hand-me-downs. As cheesy and over-the-top as they may be, they only add to the film's humor. Rapid editing and effects are poorly done, but both deficiencies seem blatant enough to suggest that this is meant to be a self-mocking schlock-fest of the strangely macabre.

Clocking in at a speedy 81 min., the story moves from on silly gag or one-liner to next ("Well, hello, Mr. Fancy Pants.") without losing the audience or its own genuine spirit of sheer outrageousness. There's never been a better mixture of fantasy, slapstick comedy, and horror.

Shout! Factory summons the dark forces to bring Sam Raimi's 'Army of Darkness' to Blu-ray as a three-disc Collector's Edition under the distributor's Scream Factory line, featuring all four official versions of the cult film. Missing is the rare fan-made extended bootleg cut. All three Region A locked, BD50 discs are housed inside the normal blue case with brand new reversible cover art and a cardboard slipcover, and the first two sit comfortably on either side of a center panel.

The first disc contains the original 81-minute theatrical version, and the second comes with the 96-minute "Director's Cut" containing the infamous apocalyptic conclusion and a few alternate sequences. The third comes with the "International Cut" of the movie, arguably the best version of the bunch, which incorporates the Ash and Sheila love-making scene, and the same disc includes the extended television cut. At startup, the first disc goes to an animated menu screen with music and full-motion clips while the other two commence with a static but amusingly animated screen with the usual options and music. Also, if you buy direct from Shout! Factory, fans can get an exclusive, limited edition poster of the newly commissioned artwork with their purchase! 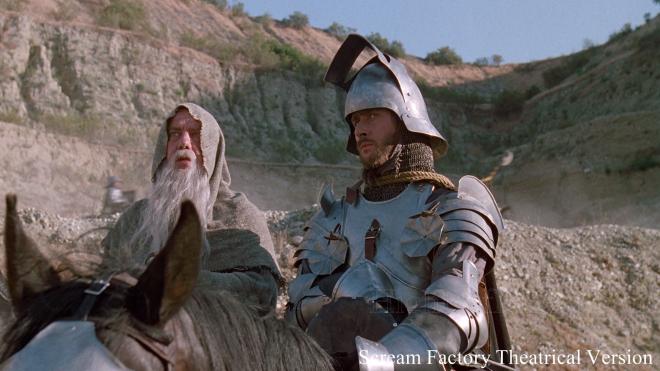 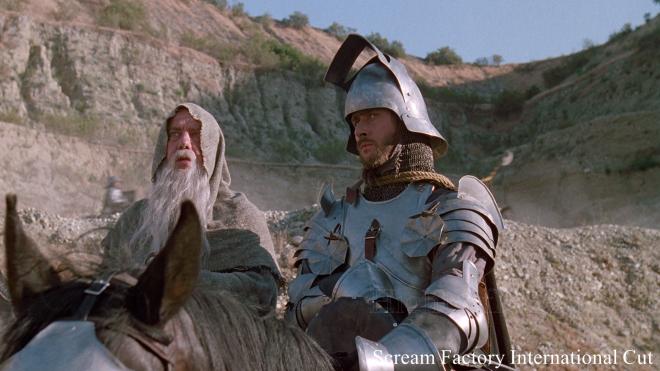 Ash is thrust into heroism against the army of deadites with a trio of strong looking 1080p/AVC MPEG-4 encodes that die-hard fans will enjoy. The biggest complaint against Universal's Screwhead Edition from 2009 was the somewhat heavy use of edge enhancement in many sequences. Sadly, this newest Blu-ray edition isn't a massive upgrade over the previous release as it still shows a bit of haloing in the same spots as before. However, it is a satisfying improvement nonetheless and back-and-forth comparisons reveal an attempt to correct the damage by adjusting contrast a tad lower. It's not perfect, as the digital tampering is not as egregious or distracting, but the same disappointing problem still persists. A brand new master from the original camera negatives surely would have yielded better results, but, of course, the folks at Scream Factory had to work with what they were given by Universal, still the results will likely make some happy. Also, the director's cut is on par with this version.

Thankfully, collectors are given three versions from which to choose, and of them, I find the international cut the most appealing. The difference may not be as apparent in a few sequences, looking very much as if taken from the same cloth the other two, but there are several moments where this brand new 4K scan of the inter-positives offers an improvement and can be argued as the best available presentation of the cult classic. There isn't any visible haloes though there remains some very mild ringing around the edges of a few objects; however, it doesn't appear to be the result of digital tampering but the effect of shooting in high-contrast photography. Still, the high-def transfer is well-balanced and comfortably bright throughout, which is also another area some viewers will note minor differences, such as the pic of Sheila and the Flying Deadite. Also, the following links compare the same shot and the level of edge enhancement versus natural ringing: Screwhead, Theatrical, Director's and International.

Nevertheless, the one thing all three share in common is the excellent definition and overall resolution. Naturally, they come with their share of fairly soft and blurry scenes, but each is easily forgiven as the product of the source's age, condition and the cinematography. Added to that, the film's low budget origins and extensive use of optical effects (pre-CGI) will probably never allow for the best quality possible or could ever compare to other productions of the time or since. On the other hand, the video is still nicely detailed with sunny exterior shots taking the cake, revealing clean defined lines in the armor, the coarse fabric in the costumes and the stone walls of the castle. Colors are much brighter and better resolved than previous versions while flesh tones appear more natural and now border on the cooler side. Black levels are deep and accurate with surprisingly good shadow delineation, and a consistently stable and ultra-fine grain structure washes the 1.78:1 image of all three, providing each with lovely and appreciable cinematic quality. 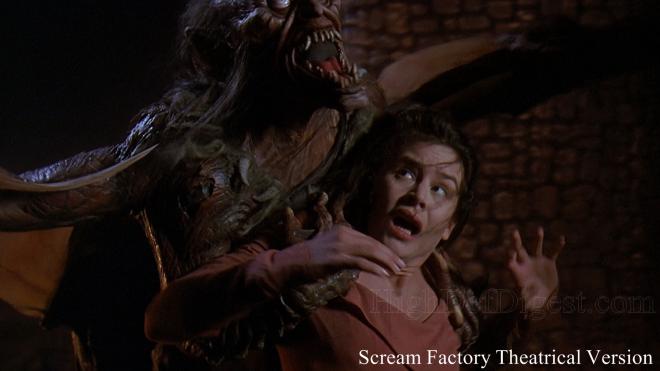 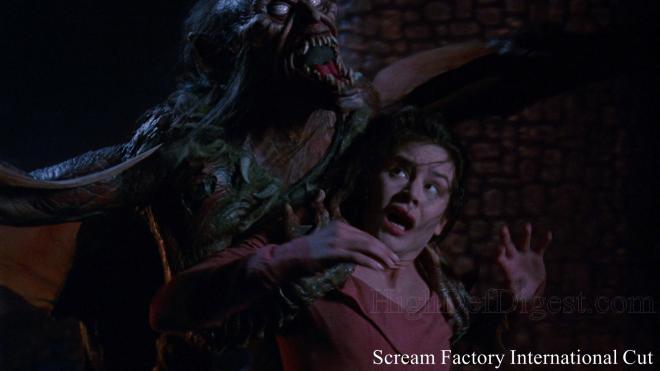 In the audio front of this deadite battle, the dogs of war howl their way towards victory with a pair of satisfying DTS-HD MA soundtracks on each film. And as is often the case, one format feels better suited to the movie than other, which doesn't automatically imply one superior to the other.

To start, back and forth comparisons between this theatrical version and the Screwhead Edition, which is a 5.1 surround track, reveal they are par with one another: one doesn't deliver a better experience than the other. Rear speakers are mostly reserved for musical bleeds to extend the soundfield, but activity finally picks up during the climactic battle sequences, with discrete effects filling the room and surrounding the listener. However, much of the excitement and commotion seems a bit thinned out and feels slightly forced in a few segments. Ultimately, as in many of Scream Factory's releases, the 2.0 track is more engaging and satisfying because it's more faithful to the original recording, and the company should be commended offering loyal fans the listening option.

Interestingly, similar to the video, the international version also sounds better than the theatrical and director's cut, even in the 5.1 format, which perhaps has something to do with being derived from a new master of the inter-positives. Still, I found myself preferring the 2.0 stereo soundtrack — for obvious reasons — and when applying the DSU option on my Denon, it easily bested the native surround soundtrack available on the disc. Much of the action still remains fixed in the front soundstage, but it feels spacious and often sprawling thanks to an excellently clean dynamic range, broad imaging, and terrific separation between the channels. Off-screen activity is convincing, creating a lively, animated presentation. Most impressive is a musical score that bleeds into the rears with an amazing sense of naturalness, nicely filling the room, engaging the listener and providing the film with a great deal of whimsical charisma. Several atmospherics discretely and flawlessly pan between the speakers, generating an awesomely satisfying and immersive soundfield. Screams, wails, and Ash's wisecracks are clearly heard in the center of the screen, and the low-end is a bit more responsive and full-bodied than in the other two versions or any previous editions, making this the best presentation available. 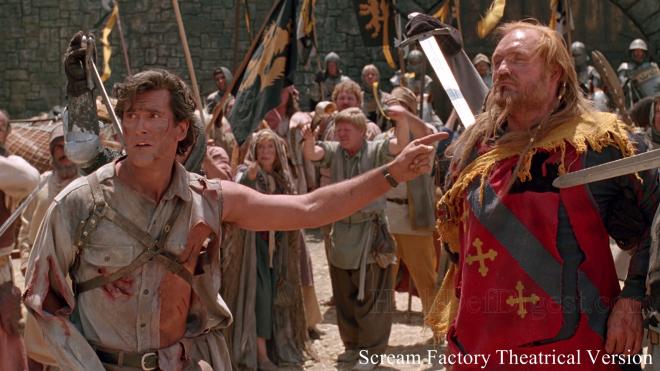 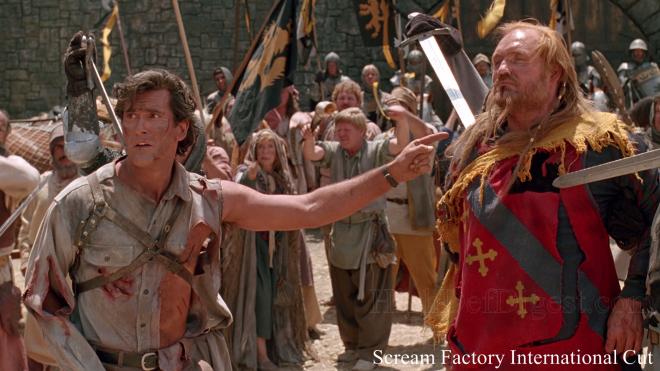 Scream Factory has summoned many supplements from the corpses of the numerous DVD reincarnations of the movie, making this package the definitive version available in HD. 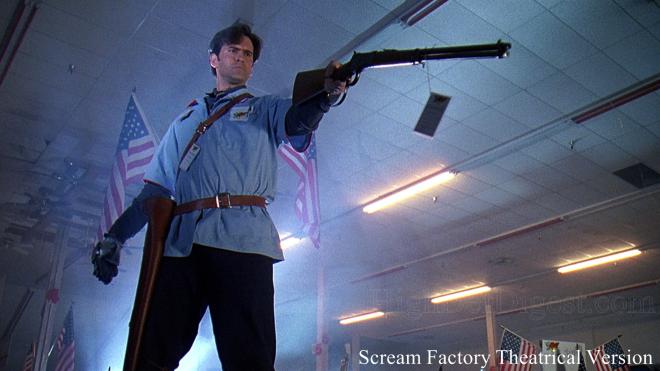 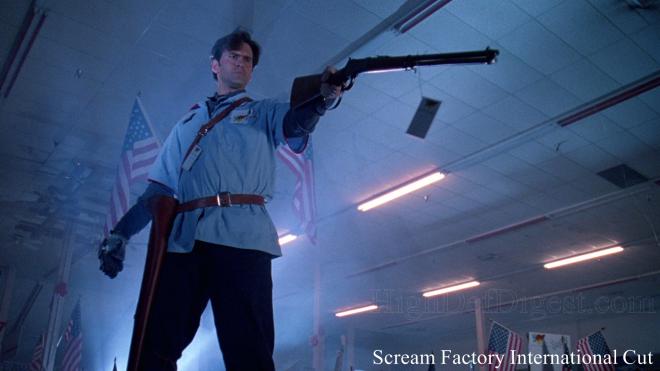 The intentionally campy 'Army of Darkness' remains a cult classic. Thanks to Bruce Campbell's perfectly-timed performance and the wacky visual effects referencing Ray Harryhausen, the horror-comedy continues to scare the laughs out of you while offering a fun ride. The three-disc Collector's Edition from Scream Factory unleashes the dogs of war with an improved picture quality and satisfying audio tracks with the "International Cut" offering the best AV presentation of all three. With an excellent assortment of supplements sure to keep owners busy, this is the definitive HD version every die-hard fan should proudly display in their cult library.

Sale Price 22.99
List Price 34.99
Buy Now
3rd Party 17.85
In Stock.
See what people are saying about this story or others
See Comments in Forum
Previous Next
Pre-Orders
Tomorrow's latest releases