Based on real-life reporter Kim Barker’s revealing and funny memoir about covering the war beat in the Middle East, WHISKEY TANGO FOXTROT is a sharp and savvy film that critics are calling “boldly entertaining” (Stephanie Zacharek, Time).  A satirical take on combat journalists and an illuminating story of self-discovery, the film follows Kim (Fey) as she decides to shake things up by taking a dangerous assignment in Afghanistan.  There, in the midst of chaos, Kim discovers her true strength as she risks it all to find the next big story.  The film features an all-star ensemble cast including Margot Robbie (The Wolf of Wall Street, Suicide Squad), Martin Freeman (The Hobbit: An Unexpected Journey), Billy Bob Thornton (“Fargo”), and Alfred Molina (Spider-Man 2).

Tina Fey demonstrates her ability to take on a more serious dramatic lead in 'Whiskey Tango Foxtrot.' The SNL alum has proven herself to be a thoughtful actress here and there, but those sentimental moments have usually been quickly followed by bits of comedy. This can be seen most recently in the disappointing 'This is Where I Leave You' where Fey reveals a tenderhearted, potentially tearful side but is sadly overshadowed by the wackier performances of other cast members. In this biographical war dramedy, however, the filmmakers allow their star plenty of freedom and range where her quick on her feet sardonic remarks produce more giggles than a surge of laughter. What ultimately raises a somewhat pedestrian, run-of-the-mill plot is Fey's usually neurotic personality faced against the certainty of mortality.

Based on the memoir The Taliban Shuffle by Kim Barker, in which the TV journalist recounts her time spent in Pakistan and Afghanistan during war time, the adaptation goes through the usual motions and is largely a predictable popcorn piece. Fey's Baker accepts the assignment at the onset of a mid-life crisis and immediately faced with the customary challenges of fumbling her assimilation to a drastically different culture. She's berated by Afghan women for not wearing her headscarf correctly or for holding hands in public, and Margot Robbie shows up for pretty much no other reason than to remind her she can be the main course in a dinner party serving only cocktail weenies. Along with also having to adjust to military conduct while on the field, these moments make up the majority of the comedy, but of more interest is how the script by Fey's long-time collaborator Robert Carlock ('30 Rock,' 'Unbreakable Kimmy Schmidt') gives Fey the opportunity to bring that fragile, vulnerable performance forward. And she's a joy to watch, using her quirky cynicism as a defense mechanism while struggling to redeem herself from one misstep after another. 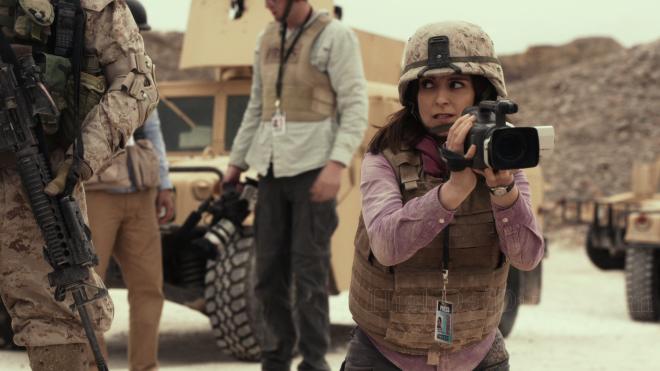 Although she frequently stumbles and falls, Baker is a woman in search for a better version of herself, and that journey of self-discovery takes place in a foreign land caught doing much of the same. Like that country's bumpy trek back to normalcy, Baker must navigate a treacherous road occupied and largely commanded by men. The man partially leading the charge in Afghanistan's reconstruction is Alfred Molina as Ali Massoud Sadiq, a government official who's not so subtle sexual advances serve as evidence to Robbie's early advice. Billy Bob Thornton also stars as General Hollanek, providing the sort of resistance and disapproval Fey needs for her character to progress. Both men build a friendship with her from opposing views: one thinks her a sexual conquest whose best move is simply unveiling a hidden bed in his office while the other mostly sees her as a nuisance to the mission. Serving as the obvious gentleman that grounds her to reality is Martin Freeman as Scottish photographer Iain MacKelpie and Christopher Abbott rounds out the cast as Baker's driver and cultural intermediary Fahim Ahmadzai.

'Whiskey Tango Foxtrot' is, for the most part, a familiar story with the same reliable outcomes. The film doesn't bring anything new to the table — and doesn't seem to want to — but the biggest challenge for the filmmakers is not to screw it up while also staying clear of the hackneyed landmines they could easily have tripped on. Duo directors Glenn Ficarra and John Requa, the writing team of 'Bad Santa' known for their collaboration on the pleasantly surprising 'I Love You Phillip Morris' and 'Crazy, Stupid, Love,' handle Baker's journey with an expert eye, guiding each episodic situation with just the right tone of humor and absurdity to never distract from what's really at stake. By the time, Baker finds what she's looking for, we can almost imagine a star-spangled banner with the words "Mission Accomplished" hanging behind her. The film provides a glimpse, however minor and perhaps trivial, into the challenges faced by war journalists, from the real fatal dangers to the strain of producing newsworthy stories. It can feel a bit choppy at times, but the film is a heartwarming tale with a splendid performance by Tina Fey.

Paramount Home Entertainment brings 'Whiskey Tango Foxtrot' to Blu-ray as a two-disc combo pack with a flyer for an UltraViolet Digital Copy. The Region Free, BD50 disc is housed inside a blue eco-vortex case with a DVD-9 on the opposing panel and a glossy slipcover. After a few skippable trailers, viewers are taken to a static menu screen without music but the usual options along the bottom.

The war dramedy debuts on Blu-ray with a first-rate, reference-quality 1080p/AVC MPEG-4 encode that shows exceptional definition and resolution from beginning to end. Every pebble and grain of sand is distinct while the tiniest pockmark in the various rock formations can be individually made out, giving the New Mexico landscape an exotic, faraway feel. Even in the far distance, the most unique rock groupings and patterns are plain to see. Lifelike complexions, especially during close-ups, reveal every pore, scar and blemish with superb clarity. Each hair is sharply rendered, every thread and stitch in clothing discrete, and every smudge and dirt on vehicles is well-defined. The combat uniforms of Marines show some wear and tear, and the humvees are littered with tiny scratches, nicks and abrasions of battle with outstanding detail. On several occasions, each fibre and loose strand of fabric in the women's headscarves are razor sharp and incredibly realistic.

Presented in a 1.78:1 aspect ratio, the freshly-minted transfer, which was taken directly from a digital source, arrives with an excellent but deliberately stylized contrast balance. Daylight sequences intentionally run hot with whites slightly blooming in a few spots, but surprisingly, they don't clip or wash-out any surrounding details. At night and during poorly-lit interiors, of which there are many, the video remains stunningly crystal-clear with exceptional visibility of the smallest background information, such as the decorations and tapestries inside the home of the journalists. Blacks are luxurious and inky rich with remarkable gradations and cavernous shadows, providing the image with an appreciable cinematic appeal and outstanding dimensionality. A great deal of the palette is generally geared towards the warmer yellow-orange colors, but primaries still pop with intensity and energy while the softer hues add variety, making this a splendid high-def presentation.

Despite being a character-driven dramedy, 'Whiskey Tango Foxtrot' lands on hostile territory with a jaw-droppingly good, reference-quality DTS:X soundtrack that will have the house rumbling and erupting into action on several occasions. For those not equipped for the new codec, the track defaults to the standard 7.1 English DTS-HD Master Audio, which is just as strong and satisfying as its object-based counterpart.

As would be expected from a movie of this genre, this is a front-heavy presentation where a majority of the action takes place, but that's not to say it doesn't come with several excellent moments. At first, things start off a bit narrow while Kim Baker lives in the city. But once she arrives in Afghanistan, the screen opens up with a broad amount of activity. Imaging is incredibly expansive and spacious as people litter the busy city streets with chatter, car horns and dust blowing in the wind, and many of these same sounds effortlessly move between the channels and nicely bleed to the top front heights. This is most impressive during the several action sequences when the rumbling of explosions and random debris spread across the entire screen and above, creating an amazing, terrifically engaging wall of sound. Through all this, the mid-range maintains exceptional clarity and definition, exhibiting superb separation between the mids and highs even during the loudest segments, of which there are many. Vocals remain distinct and precise throughout, never overwhelmed by the rest of the action. And the low-end delivers shockingly deep, powerful waves of bass, hitting the lower octaves that will rock the foundation, providing every gunshot, explosion and helicopter engine with awesome palpable weight (bass chart).

Although being a serious comedy, this lossless mix is set to impress much like the story's heroine, taking full advantage of the new audio format in surprisingly the same way an action flick would. In fact, this object-based track might even give some bang-bang shoot'em ups a run for their money since it doesn't take long before sounds gravitate all around the room, creating a believable three-dimensional space. From the random noise of the Afghan streets to the sudden, unexpected bursts of action, atmospherics continuously echo throughout, keeping things lively and active while nicely adding to a satisfying soundfield. Granted, there are a few pockets of quieter moments, but they're intentional for specific scenes of plot development. Still, the design amazes with the sound of helicopter blades flying overhead and smoothly moving from one corner of the room to the other, bullets that whiz from the screen to the back of the room with convincing effectiveness, and various vehicles zoom from one surround channel to the next with flawless panning and fluid movement. Without a doubt, the scenes with Kim Baker out in the field and on the military base are the stunning demo-worthy moments, creating an astoundingly immersive dome-like effect which audiophiles will instantly fall in love with.

Based on the memoirs of journalist Kim Baker, 'Whiskey Tango Foxtrot' is a war dramedy with heartwarming soft spot and stars Tina Fey in one her best dramatic performances yet. Although a bit choppy and episodic without really taking many risks with its predictable plot, the film, in the end, accomplishes its mission and as intended with several endearing moments that make it somewhat memorable. The Blu-ray arrives with a stunning, reference quality audio and video presentation that should please fans while also winning over those sitting on the fences. Although supplements are rather disappointing, the overall package is recommended.

Sale Price 4.5
List Price 8.99
Buy Now
3rd Party 8.94
In Stock.
See what people are saying about this story or others
See Comments in Forum
Previous Next
Pre-Orders
Tomorrow's latest releases