I Love You Phillip Morris

Overview - I Love You Phillip Morris is the improbable but true story of a spectacularly charismatic con man's (Carrey) journey from small-town businessman to flamboyant white-collar criminal, who repeatedly finds himself in trouble with the law and on the lam, brilliantly escaping from the Texas prison system on four separate occasions - all in the name of love.
OVERALL
Recommended 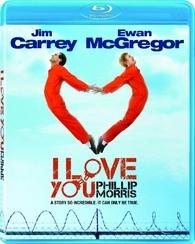 'I Love You Phillip Morris' is not the type of movie I'm supposed to like, let alone praise. And no, it's not for the reasons you're thinking. I have a legitimate, critical perspective from which I write, so you can discard your hate email, full of odious, "well, I've never" revulsion. I'm referring to the actual film and its structure, not the subject matter. Narratively, the plot is all over the place and generally lacks focus. (See, I told ya so) But gosh darnit, it won me over by the end with the craziest tale about a real-life con man and how he finds true love while incarcerated. Just as the tagline promises, the story is so wild and incredible that it could only be based on reality in some form or another.

The movie is the directorial debut of Glenn Ficarra and John Requa, the same writing team that concocted the shockingly uproarious 'Bad Santa' — but keep in mind, they also thought 'Cats & Dogs' was a good idea as well. They open with a hospital death scene and a voiceover that will obviously reflect back on the humdrum details that lead up to the beginning. It's all fairly routine and frankly, stale filmmaking technique, even though the script — also written by the directors — is adapted from a book by Steve Vicker. But something happens and the film takes off like a rocket with an endless barrage of outrageous hilarity. Then suddenly, we slow down and settle into an unfortunate love drama.

The laughs are still there, but they're more tragically funny than side-splitting. Much like the role of Steven Jay Russell, which sees Jim Carrey at his best in some time, 'I Love You Phillip Morris' is not sure what it is or what it really wants to be. It comes out of the gate in colorful, boisterous regalia and swiftly changes pace as the story moves along. As much as I try to avoid enjoying a rather flawed script, I must admit that what makes the film a winner is the characters. Ewan McGregor as Russell's eponymous lover terrifically holds his own in every scene with Carrey, and Leslie Mann plays a small bit as his understanding ex-wife. Rodrigo Santoro ('300,' 'Love Actually') also stars in a minor but equally memorable role as Russell's previous boyfriend.

It's in films like these that Jim Carrey reminds moviegoers he can be an earnest and genuine actor, that he has the ability to pull viewers in with an amazing performance and not just another contortionist shtick of pratfalls. Here, he plays a man known for being a highly-skilled charlatan and for his multiple, ingeniously-devised prison escapes. Not too much of surprise considering he's gone from being a Grinch to a lawyer and from talking with a heavenly creator to playing God himself. Next logical step, I suppose, would be portraying an out-of-the-closet con artist that makes no secret about his lifestyle, but remains somewhat of a laughing matter through most of the dramedy.

After a while, we start to realize that the audience is in for one last swindle from Russell, thanks to Carrey's not-seen-often-enough acting chops. Despite its flaws, the script draws viewers in with the characters and the bizarrely laughable events occurring around them. Same way Russell smooth-talks his way into people's money and robs them blind, 'I Love You Phillip Morris' cons us with an indelible sweetness and heart, and slowly reveals a drama with situations that are coincidentally comedic. I'm not really supposed to enjoy the company of someone like Russell or be entertained by a film with so many faults. But in Carrey's capable hands — when he genuinely surprises — it comes with such great charm and humor that it's very much entertaining and enjoyable. I don't feel cheated of 90-minutes of my life, just like any really good con should make its target feel.

Lions Gate Films Home Entertainment brings 'I Love You Phillip Morris' to Blu-ray on a Region A locked, BD25 disc and housed in a blue eco-case. At startup, the disc greets viewers with a series of skippable trailers. Afterwards, it goes to the standard menu selection while stills from the movie pop-up in the background.

Maybe it has something to do with the lighting and photography, but 'Phillip Morris' doesn't leave much of an impression on Blu-ray for a new release. That's not to say it looks bad or anything. In fact, the 1080p/AVC MPEG-4 encode is quite good with great clarity and resolution. The transfer displays excellent definition of fine lines in clothing, jewelry and the prison cells. Facial complexions appear healthy and show revealing texture, especially in close-up. Primaries are glamorous and leap off the screen with flamboyancy (pardon the puns; they're my lame attempt at comedy), while the other hues are energetic and bright.

Overall, the video comes with many positives, but it's not all hunky-dory from beginning to end. Granted, daylight exteriors look terrific, but shadow details tend to suffer somewhat in the interiors. Although consistent from beginning to end, contrast levels seem a bit weak and bland, giving the image a generally flat and boring appearance. Blacks are generally deep and accurate, but they also falter in several scenes, often looking murky and dark gray. There are a few times as well when the picture isn't quite as detailed as its better parts.

All things considered, 'Phillip Morris' isn't all bad, but it's not anything special either.

The dramedy also arrives with a DTS-HD Master Audio soundtrack that shows a bit more panache than the video.

The front soundstage is wide and welcoming with well-balanced channel separation and smooth pans. Vocals are plain and intelligible, allowing for those Southern drawls from the two leads to come through clearly. The mid-range is clean and expansive, though it never seems to be pushed very far except for a couple, minor action sequences. Bass doesn't put on much of show either, but lower frequencies are responsive and appropriate for this type of genre. Ambient effects, like birds chirping, the chatter of prison halls and certain song selections, are employed effectively to enhance the soundfield.

This is a fun high-rez mix that works nicely for the movie.

For this Blu-ray edition of the Jim Carrey dramedy, Lions Gate offers a small collection of supplements that don't delve too much into the production.

From the writers of 'Bad Santa,' 'I Love You Phillip Morris' is a surprisingly entertaining dark dramedy with Glenn Ficarra and John Requa making their directorial debut. Jim Carrey leads the way with a greatly funny performance and a terrific supporting cast in a story about the crazy things a man will do for true love. The Blu-ray arrives with a very good video presentation and fine audio, but the bonus features leave much to be desired. Overall, it's a good package for fans and recommended for those wanting to enjoy a bizarre comedy based on the story of real-life con artist Steven Jay Russell.

Sale Price 9.99
List Price 14.99
Buy Now
3rd Party 4.9
In Stock.
See what people are saying about this story or others
See Comments in Forum
Previous Next
Pre-Orders
Tomorrow's latest releases