A man impersonating a woman on stage? Piece of cake. But a woman whose livelihood depends on pretending to be a man who pretends to be a woman? Now you've got problems! You've also got laughs when Julie Andrews plays Victor and Victoria in this clever delight from filmmaker Blake Edwards boasting a marvelous Academy Award-winning score by Henry Mancini and Leslie Bricusse.

Gender-bending comedies have always appealed to the moviegoing public, even as far back as the 1930s, when the nation's attitudes about sexual identity were way more close-minded than they are today. Yet over the past three-plus decades, Hollywood has churned out innumerable tales of men and women crossing gender lines for a variety of daffy reasons, and 'Victor Victoria' helped fuel the craze. Writer-director Blake Edwards' 1982 period farce may not be the genre's poster boy (or girl?), but it proudly honors its subject by crafting a funny, intelligent, romantic, and tuneful story of a woman pretending to be a man pretending to be a woman. That sounds complicated - and it is - but the confusion only adds to the fun. As light as a soufflé, but with a sprinkling of substance, 'Victor Victoria' is a charming, entertaining testament to personal truth and universal acceptance - and those messages never get old.

Victoria Grant (Julie Andrews) is literally a starving artist trying to catch a break as a singer in Depression-era Paris, but her coloratura soprano voice and prim demeanor don't wow the proprietors of the city's swanky clubs. Gaunt and weak from hunger, she turns to Toddy (Robert Preston), a cabaret performer who's just been sacked by the ritzy Chez Lui after inciting a brawl over the betrayal of his gay lover. Toddy recognizes Victoria's talent, and with his help (and a bit of arm twisting) she agrees to masquerade as a man and promote herself as a female impersonator. The guise works, and she gets a gig at - where else? - Chez Lui. Her debut is a smashing success and "Victor" instantly becomes the toast of Paris.

Vacationing Chicago mobster King Marchand (James Garner) witnesses the performance and becomes infatuated with the onstage Victoria, much to the chagrin of his floozy girlfriend, Norma Cassidy (Lesley Ann Warren). But when "Victoria" reveals herself to be "Victor," King becomes confused by his feelings for the magnetic and attractive artist, and a strange obsession results. His affair with Norma hits the skids, and soon - in true madcap fashion - everyone's sexuality is examined and tested, as are the traditional societal roles of men and women. Amid the gags and musical numbers, we're left to ponder, "What does being a man - or a woman - really mean?"

Like Edwards' '10' and, to a lesser extent, 'S.O.B.,' 'Victor Victoria' deftly weaves potent statements into its comic framework, making points about feminism, pride, the mechanics of relationships, and coming to terms with who we really are. All the characters are well drawn and, despite their over-the-top antics, exude a natural essence that nicely balances the story's farcical elements. (Edwards' screenplay earned an Academy Award nomination - surprisingly, the only Oscar nod the acclaimed writer-director ever received.) It's no secret Edwards loves slapstick (he directed eight 'Pink Panther' movies, and one of the characters in 'Victor Victoria' delightfully resembles Inspector Clouseau), but he's careful not to overplay it or let it impede his narrative. Some scenes recall Keystone Cops and Mack Sennett silent comedies, but they're also emblematic of Edwards, which make them easier to embrace.

'Victor Victoria' was inspired by a 1933 German film that took place in Berlin, and though the Paris locale (recreated on London soundstages) comfortably fits the 1982 version, it's tough not to believe the backdrop of the decadent and free-spirited Weimar Republic would better serve the story. The musical numbers often evoke Bob Fosse's 'Cabaret,' and when she dons a tuxedo, Andrews' androgynous character brings to mind Marlene Dietrich, who often wore the costume.

Andrews may not be very believable as a man, but comedies like these rely more on illusion than reality, and she certainly embraces the role. Her spirit, sincerity, and, most of all, her pipes win us over, especially during the movie's signature number, 'Le Jazz Hot,' a steamy and exhilarating tune by the great Henry Mancini that's impeccably staged and executed. It's the musical high point of the film and shows off Andrews to perfection.

Garner doesn't say much, but his wonderful reactions speak volumes, while the energetic Preston embodies the flamboyant Toddy, filing one of his best screen portrayals. Alex Karras, John Rhys-Davies, and a number of reliable Edwards stock players assert themselves well, but it's Lesley Ann Warren who steals the show with her brassy, bawdy take on a gangster's moll. A delightful mix of Jean Harlow and Lina Lamont, Warren's work always provokes a smile or guffaw, and was justly rewarded with a Best Supporting Actress Oscar nomination. (Jessica Lange, who had to deal with Dustin Hoffman's gender deception in 'Tootsie,' took home the award.)

In all, 'Victor Victoria' garnered seven Academy Award nominations, including ones for Andrews as Best Actress (she lost to Meryl Streep in 'Sophie's Choice'), Preston as Best Supporting Actor, art direction/set decoration, costume design, and song score, which Mancini won. Though it drags a bit toward the end, the superior production values, intricate plot, and captivating performances of 'Victor Victoria' keep us engaged. And while its message hardly seems revolutionary today, it's still worth noting and heeding. 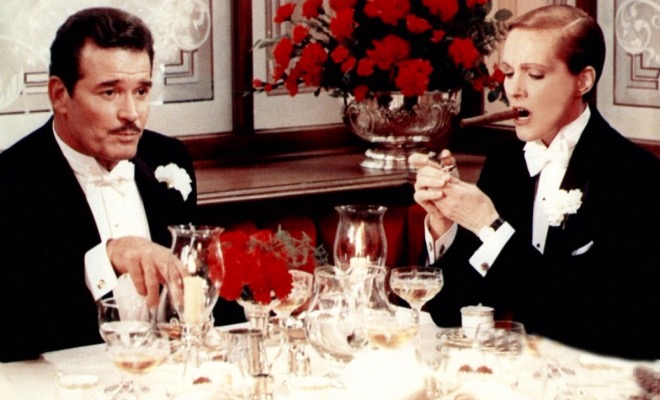 'Victor Victoria' arrives on Blu-ray packaged in a standard case. Video codec is 1080p/AVC MPEG-4 and audio is DTS-HD Master Audio 5.1. Once the disc is inserted into the player, the static menu without music immediately pops up; no previews or promos precede it.

Crisp, lush, and free of any age-related nicks, marks, or scratches, 'Victor Victoria' looks terrific on Blu-ray. Warner Archive's 1080p/AVC MPEG-4 transfer combines exceptional clarity and contrast with a pleasingly muted grain structure to produce a vibrant, film-like viewing experience. Primary hues look beautifully sumptuous, black levels are rich and inky, and whites are bright but never bloom. The film was entirely studio shot, and the enhanced detail levels call greater attention to the artificiality of "exteriors," but it's a small price to pay for such a well-composed image. Background elements are easy to discern, shadow delineation is good, and close-ups burst with fine details, accenting the loveliness of Andrews and brassiness of Lesley Anne Warren. No banding, noise, or other digital issues afflict the transfer, and any enhancements escape notice. Once again, Warner Archive has breathed new life into a catalogue classic, producing a high-quality rendering that will please fans and cinephiles alike.

The DTS-HD Master Audio 5.1 track supplies wonderfully full-bodied sound that exudes a lovely richness and depth of tone. Though surround activity is limited to the scoring, the lush strains of Henry Mancini's music fill the room with ease, while a wide dynamic scale effortlessly handles all its highs and lows. Andrews' peerless voice sounds full and pure, and the expertly mixed songs showcase it to perfection. Audio effects nicely punctuate the soundscape, and all the dialogue is clear, well-prioritized, and easy to comprehend. Best of all, no age-related defects, such as hiss, pops, or crackles, or any distortion intrude. Fans of musicals in general and Andrews in particular will be thrilled with this vibrant and nuanced track.

Only a few extras are included on the disc, all of which were ported over from the 2002 DVD release of the film.

One of the better gender-bending comedies that also employs a solid musical backdrop, 'Victor Victoria' can't compare to 'Some Like It Hot' or 'Tootsie,' but it remains a clever, cogent, and entertaining romp fueled by the multi-talented Julie Andrews. Directed with panache by Blake Edwards, and peppered with a few of his trademark slapstick gags, this topsy-turvy tale of a woman pretending to be a man pretending to be a woman tempers its madcap humor with insightful bits of substance that perhaps resonate more today than they did almost 35 years ago. Warner Archive's Blu-ray presentation skimps on supplements, but features lusciously upgraded video and excellent lossless audio, both of which heighten the film's impact and enhance the viewing experience. Recommended.

Sale Price 21.99
Buy Now
3rd Party 17.99
In Stock.
See what people are saying about this story or others
See Comments in Forum
Previous Next
Pre-Orders
Tomorrow's latest releases