Just Desserts: The Making of Creepshow

In 1982, author Stephen King and director George A. Romero collaborated on a feature-film tribute to the controversial EC comics of the 1950s. Told through five jolting tales of terror, Creepshow has become a celebrated horror classic over the past three decades. With an all-star cast, and featuring groundbreaking special effects by genre legend Tom Savini, Creepshow stands as a horrific and hilarious tribute to the stories that helped influence (and corrupt) a generation of writers and filmmakers. Now the tales behind the creation of this chilling masterpiece can finally be told!

Featuring rare behind-the-scenes footage and photographs, Just Desserts: The Making of Creepshow also contains over a dozen interviews, including George A. Romero, Tom Savini, Adrienne Barbeau, Tom Atkins and many others. These are the terrifying stories behind the film that promised you... The Most Fun You'll Ever Have...BEING SCARED!

If we're going to be perfectly honest, 'Just Desserts,' a detailed documentary on the making of George A. Romero's cult favorite 'Creepshow,' would really be better suited as a bonus feature for some special anniversary collector's edition Blu-ray. This is not to suggest theres anything particularly wrong with the piece. Only, that much of the film is of a lesser quality than would be expected of a full-length, standalone documentary that exhaustively looks at a production which didn't face major problems or difficulties. Granted, with a limited budget and a small independent crew, the filmmakers were met with several challenges that had to be overcome, such as when it came to working with some very uncooperative cockroaches for the "They're Creeping up on You" piece with E.G. Marshall. So, without a serious controversy that ideally would threaten the completion of the movie or some type of behind-the-scenes quarrel making it a laborious, problematic production, this movie is frankly not up to the caliber of, say, something like 'Hearts of Darkness,' 'Jodorowsky's Dune' or 'Overnight.'

Still, that does not mean fans can't glean some interesting and worthwhile factoids about the 1982 horror anthology classic, which this documentary certainly provides. Life-long devotees will be familiar with most of the information shared by the cast and crew, who show a great deal of love for how the film turned out and enthusiastically reminiscence on the time they spent making it. But even I found myself surprised by a few tidbits here and there, certain aspects of the production I was not aware of, and was pleasantly surprised by some of the comments. For one, I didn't know Tom Savini, gore-effects maestro whose special FX wizardry made 'Day of the Dead,' 'Maniac,' 'The Burning' and 'Friday the 13th' into cult phenomenons, used toilet paper as part of his bag of tricks, which only proves his creative genius and elevates his work into some of the best in the business. The purpose was in making the dead faces of Ted Danson and Gaylen Ross appear to bleed more naturally when shot by Leslie Nielsen in "Something to Tide You Over." Savini used the same trick for when the roaches suddenly burst out Marshall's chest. 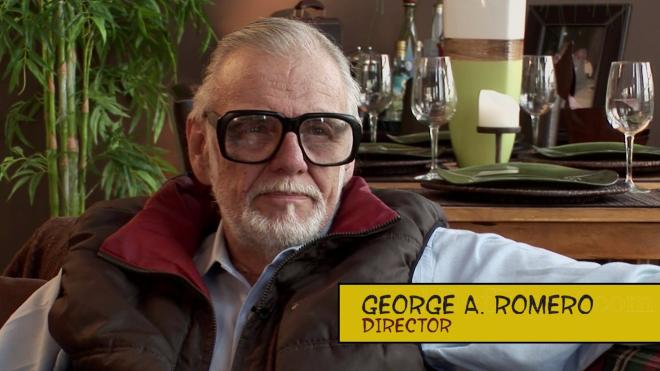 Directed by Michael Felsher, an independent filmmaker who's made a career of making entertaining behind-the-scenes featurettes, which explains this movie's quality and format, the documentary traces the entire production, from initial inception to its completion. Though we sadly don't hear much about the finished product's reception, those interviewed take a minute to mention how Romero and producer Richard P. Rubinstein secured distribution rights with Warner Brothers and the fact that 'Creepshow' remains Romero's only number one box-office hit. It's also pretty cool hearing the two men talk about meeting with horror legend Stephen King and originally discussing adaptations for 'Salem's Lot' and 'The Stand.' Obviously, those talks fell through, but their time spent together was also filled with nostalgic conversations of the E.C. horror comics of the 1950s, which lead to this horror-comedy sleeper hit. This brought back memories of me as a kid discovering similar comics, like 'Midnight Tales,' 'Weird Mystery Tales' and 'Monsters Unleashed,' when the genre received a small boom in the late 70's and early 80s. When the original film hit VHS, I instantly loved it primarily for that reason.

Although 'Just Desserts' isn't up to the quality of better-made documentaries about movies, making it odd to justify it as a standalone feature rather than a bonus supplement to Romero's film, Felsher's documentary is not without some value. Its greatest strength, aside from talking about Savini's special makeup effects and some discussion on the artwork by Jack Kamen and Bernie Wrightson, are the various anecdotes and antics from the production. Although interviews from King, Leslie Nielsen and Ted Danson are noticeably lacking — throughout, I kept wanting to hear from them directly — the stories and memories shared are nonetheless amusing, especially hearing how Marshall, Hal Holbrook, Fritz Weaver and Viveca Lindfors were very much game to making the movie. Best part was hearing about the late-great Nielsen acting the nonstop clown both on set and off, carrying a fart machine with him everyone he went. And this is only topped by more discussion on the roaches and the entomologists doing their best to get the best performances from the creepy crawlies. In the end, the documentary is an amusing watch, offering fans of 'Creepshow' plenty to admire and love of the production.

Synapse Films unleashes 'Just Desserts' from its crate to Blu-ray as a Region Free, BD50 disc inside the standard blue, eco-elite case. The disc goes straight to the main menu with music and full-motion clips.

The documentary arrives on Blu-ray with a good looking 1080p/AVC MPEG-4 encode (1.78:1), but much of the presentation is surprisingly starting to show its age. A good chunk of the show is pieced together from vintage BTS footage and old photographs that were upconverted, so those aspects of the movie understandably don't match the quality of the rest and thus easily forgiven. But many interview segments are a bit on the soft side with some very minor hints of aliasing around the sharpest edges. Still, the transfer is nicely detailed with plenty of distinct definition in the furniture, clothing and the faces of those involved. The video is bright and colorful, especially when shown film clips of what appears to be an HD version of 'Creepshow' where primaries pop off the screen with rich saturation and vivid intensity. Contrast levels, unfortunately, are not as impressive, largely feeling toned down, which in turn makes for a somewhat flat and average presentation. Blacks are strong for the most part, but there are a couple areas where they, too, look a bit murky and greyish. Overall, however, none of these gripes are enough to ruin the movie's enjoyment.

Accompanying the fun and insight is an enjoyable DTS-HD MA stereo soundtrack that isn't quite as impressive as the video, but it gets the job done and is for the most part satisfying. Imaging feels broad for a documentary, displaying good balance between the channels, which is most apparent when music plays in the background. Admittedly, the design feels pretty narrow and restrained to the center for a majority of the time, understandably focused on delivering clean and distinct dialogue reproduction. And with upmixing function of the receiver applied, background music convincingly bleeds to the other speakers without being a distraction, nicely broadening the soundstage. There's isn't a whole lot going on in means of dynamics and acoustics, but the lossless mix exhibits is stable and even with clean distinction between the highs and mids. Low bass is understandably light and fairly lacking, but there's enough low-end to provide the music depth with a decent mid-level punch.

Although 'Just Desserts' isn't up to the quality of better-made documentaries about movies, and would really be better suited as a bonus feature for some special anniversary collector's edition Blu-ray, fans can still glean some interesting and worthwhile factoids about the 1982 horror anthology classic. The detailed documentary on the making of George A. Romero's cult favorite 'Creepshow' is an amusing watch, offering fans plenty to admire and love of the production. The Blu-ray arrives with a strong audio and video presentation, and the overall package comes with a wealth of great supplements, making it worth the purchase for loyal fans of the original film.

Sale Price 17.99
List Price 24.95
Buy Now
3rd Party 17.99
In Stock.
See what people are saying about this story or others
See Comments in Forum
Previous Next
Pre-Orders
Tomorrow's latest releases