With the preview for the newest installment recently landing, we're looking back at the original Bill & Ted's Excellent Adventure and Bogus Journey, a cult sci-fi comedy franchise that has most triumphantly stood the test of time and remains a hilariously fun ride through history. Shout! Factory celebrates the franchise's 30th Anniversary with a most excellent HD video presentation and righteous DTS-HD soundtracks. With a cool treasure trove of supplements to boot, this three-disc collector's edition is Recommended for the whole family in search of a phone booth full of laughs and fun.

Objectively, Bill & Ted's Excellent Adventure is a highly irresponsible, fallacious, and pretty much downright dumb movie. By all accounts, the plot of two headbanging dimwits with a limited vocabulary — a strange amalgamation of Valleyspeak, surfer and stoner — should not be this much fun, but shockingly, it is a "most triumphant" piece of entertainment. It is most definitely to the credit of Keanu Reeves and Alex Winters for turning the titular characters into a likable pair we don't mind spending time with, playing off one another like complementary halves of the same personality. Threatened with the totally bogus possibility of flunking high school, the Wyld Stallyns are joined by the scene-stealing George Carlin falling from the sky to the Circle K parking lot in a phone booth. This is when the totally bonkers silliness is subverted for a cleverly deceptive commentary on the importance of a good education.

After Carlin recklessly hands over the keys of a time machine to the lovable dolts, Bill & Ted essentially kidnap major historical figures like Socrates (Tony Steedman), Napoleon (Terry Camilleri), Abraham Lincoln (Robert V. Barron) and Joan of Arc (Jane Wiedlin of The Go-Gos) in order to cheat on their final history exam. The script by Chris Matheson and Ed Solomon (Men in Black) isn't concerned with the ramifications of interacting with historical figures. When you're having this much fun, who cares about real-life logic — the butterfly effect, alternate timelines and parallel realities be damned! This suburban fairytale is ultimately about showing that even a pair of clueless slackers can make a significant contribution to history. Enjoyed today as a cult comedy classic, the 1989 movie is a most righteous adventure through history encouraging everyone to be excellent to each other and to party on. 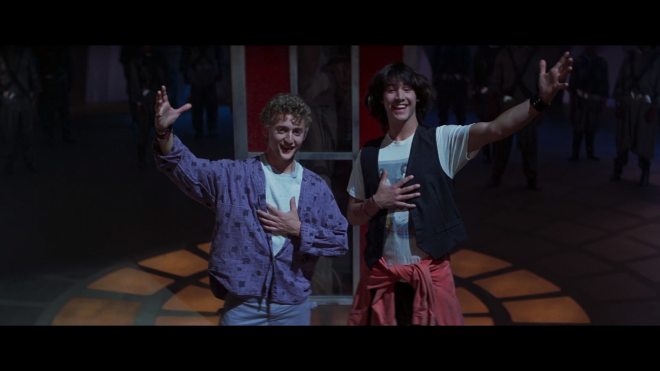 While not nearly the "most excellent" adventure as its predecessor, Bill & Ted's Bogus Journey nonetheless packs a good deal of fun and laughs into the now-iconic vintage phone booth. Franchise creators Chris Matheson and Ed Solomon return with a new story that pits our pair of lovable dimwitted heroes (Keanu Reeves and Alex Winters reprising their roles) in a literal life-and-death game against none other than Death himself (a very memorable William Sadler). Taking unabashed inspiration from Ingmar Bergman's immortal classic The Seventh Seal, some of the movie's more amusing moments are the gullible dolts battling the scythe-wielding Grim Reaper at Battleship and Twister and later ironically dressing the Dark Angel as Little Bo-Peep when asking God's help. Personally, I also enjoyed the cameo appearances of Pam Grier, Faith No More's Jim Martin, Primus, evil Easter Bunny and Michael "Boogaloo Shrimp" Chambers and Bruno "Pop N Taco" Falcon of Breakin' fame.

However, the whole Chuck De Nomolos (a rather bland and squandered Joss Ackland) subplot is as much an ineffectual component to the story as it is contrived. Granted, the 27th-Century sit-up champion turned wannabe fascist dictator introduces the plot's true antagonists: evil robot versions of our titular heroes. But outside of that, the character serves little purpose, setting events into motion at the beginning and reappearing only to bookend the story, wrapping up everything a bit too conveniently. In fact, the eye-rolling conclusion falls somewhat flat and feels undeservedly schmaltzy. But perhaps the biggest travesty in an otherwise decently entertaining follow-up is seeing George Carlin dressed in that hellacious and totally horrendous outfit with the oversized foam shoulder pads and the huge platform boots. The one image seared into memory is the nightmarish fashion of humanity's future. 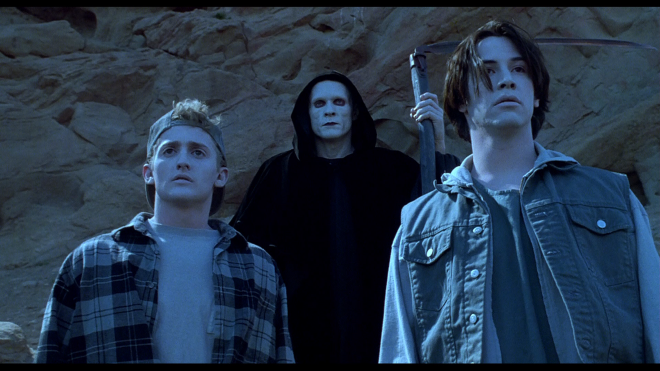 We also have separate reviews for the Limited Edition SteelBook Blu-ray, which you can check out in the following:

Shout! Factory brings the two fan-favorite sci-fi comedies to Blu-ray as a three-disc collector's set dubbed Bill & Ted's Most Excellent Collection. The Region A locked, BD25 disc is housed inside a collectible SteelBook package in a combination of vibrant reds and fiery oranges with the image of the iconic phone booth at the center. At startup, the disc goes to a generic menu selection along the bottom with music playing in the background and a static photo.

The first movie lands on time to Blu-ray with a most excellent 1080p/AVC MPEG-4 encode that dazzles and shines. The 30-year-old comedy is, of course, starting to show its age and a few scenes are a tad softer than others, but for a majority of the time, the picture is in great condition. Fine object and textural details are sharply rendered with clean, well-defined lines in the costumes, foliage and in the various locales through time. Exterior shots come with exceptional clarity and visibility in the distance, and a thinly-layered grain structure gives the movie a welcomed film-like presentation. Colors are bold with rich saturation in the primaries, and skin tones come with a natural hue. Contrast is crisp and vibrant with clean whites, and black levels are accurate with strong shadow delineation. 4/5 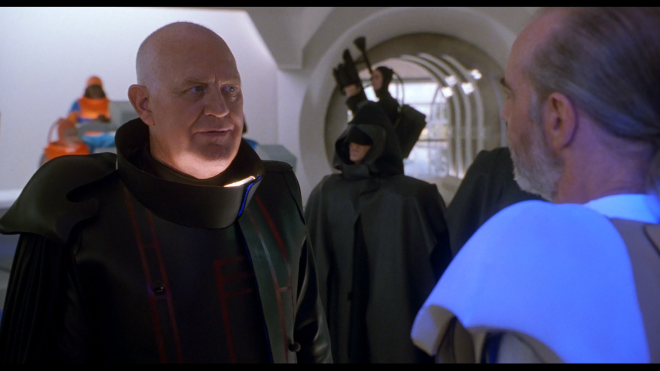 The sequel play a fatal game of wits with Death on Blu-ray, sporting an attractive and overall satisfying 1080p/AVC MPEG-4 encode. Unlike its predecessor though, the elements used are arguably not in the best condition, showing a good amount of softness and rather poor resolution in the visual effects. Nevertheless, the source has aged decently well or at least, enough to show strong definition and good details of background information, thanks in large part to the spot-on contrast and the crisp highlights allowing for great visibility within the hottest spots. For the most part, black levels are true and accurate, providing the 1.85:1 image with appreciable depth, but a few scenes falter and flatten slightly with murky, dark gray shadows. Primaries offer the biggest win, looking very rich and vibrant throughout, especially the reds and greens. Similarly, secondary hues are quite diverse and animated, particularly the mauve and lavender of couple sequences, and facial complexions appear healthy and revealing.

Awash in a consistent fine layer of grain, the HD presentation is ultimately a win and totally not bogus although it would significantly benefit from a brand new remaster of the OCN. 3.5/5

The Wyld Stallyns rock out with a most triumphant pair of DTS-HD MA soundtracks: the original 2.0 stereo track and a 5.1 surround sound alternative. Granted, neither option is the type to push your system to the edge or test its capabilities, but then again, it was never meant to in the first place. Basically, there's not really a whole lot going on in the rear speakers, if anything at all, since the audio has always been more of a stereo track, so you can't go wrong with either choice.

Remaining faithful to the film's original design, this is a very front-heavy presentation with excellent channel separation and balance. Imaging feels very broad and welcoming with convincing off-screen effects and directionality. Music spreads evenly across the entire soundstage with clean acoustics and fidelity. Dynamic range is precise and smooth with plenty of intelligible detail and clarity, providing the movie with an appreciable sense of space and presence. The low-end is not all that aggressive, which is none too surprising, but it's appropriate to the action and accurately responsive. Dialogue is crisp and distinct in the center, making this lossless mix a most excellent presentation of a fun movie. 4/5 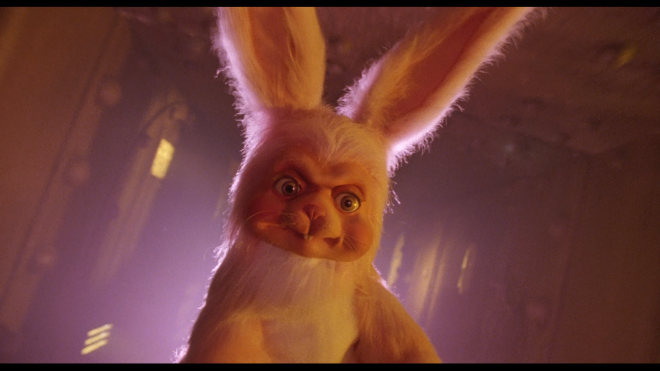 The sequel crash lands to home theaters with a slightly better pair of DTS-HD Master Audio soundtracks. The first is a 5.1 remix that frankly sounds terrible, as the sound effects come in at a higher decibel level than the vocals and noticeably overpower some of the dialogue. Also, the midrange doesn't really have much of a high-end, so the louder segments not only feel pushed beyond their limits but also come off ear-piercingly bright and even clipped in some spots while the low-end falls flat and hollow.

The preferred option is the DTS-HD 2.0 stereo mix, which is much closer to the original sound design, exhibiting massively better clarity and distinction in the upper ranges. Overall, imaging feels broader and more engaging with a great deal of warmth and acoustical fidelity, and the background activity and music spread across the entire soundstage more efficiently and convincingly. The vocals are precise and very well-prioritized, never drowned out by the heavy rock songs while the bass provides a welcomed weightiness and presence. Also, this second lossless mix lends itself well to the receiver's DSU processing, further widening and more effectively expanding the soundfield. 4/5

Bill & Ted's Excellent Adventure and Bogus Journey have stood the test of time, a most triumphantly awesome pair of time-traveling movies. Starring Keanu Reeves, Alex Winters and George Carlin, the cult comedy favorites follow two lovable, headbanging doofuses through history and eternal damnation, a most righteous voyage in a vintage phone booth. Shout! Factory celebrates the franchise's 30th Anniversary on Blu-ray in a three-disc collector's edition, featuring a most excellent audio and video presentation. With a third disc containing a worthy assortment of bonus features, the overall HD edition is recommended for the whole family looking for a phone booth packed with laughs and fun.