With the preview for the newest installment recently landing, we're looking back at the original Bill & Ted's Excellent Adventure, which has most triumphantly stood the test of time and remains a hilarious cult comedy classic. Shout! Factory celebrated the movie's 30th Anniversary with a most excellent HD video presentation and a righteous DTS-HD soundtrack. With a decently cool but small set of supplements, this SteelBook collector's edition is Recommended for the whole family in search of a phone booth full of laughs and fun.

Objectively, Bill & Ted's Excellent Adventure is a highly irresponsible, fallacious, and pretty much downright dumb movie. By all accounts, the plot of two headbanging dimwits with a limited vocabulary — a strange amalgamation of Valleyspeak, surfer and stoner — should not be this much fun, but shockingly, it is a "most triumphant" piece of entertainment. It is most definitely to the credit of Keanu Reeves and Alex Winters for turning the titular characters into a likable pair we don't mind spending time with, playing off one another like complementary halves of the same personality. Threatened with the totally bogus possibility of flunking high school, the Wyld Stallyns are joined by the scene-stealing George Carlin falling from the sky to the Circle K parking lot in a phone booth. This is when the totally bonkers silliness is subverted for a cleverly deceptive commentary on the importance of a good education.

After Carlin recklessly hands over the keys of a time machine to the lovable dolts, Bill & Ted essentially kidnap major historical figures like Socrates (Tony Steedman), Napoleon (Terry Camilleri), Abraham Lincoln (Robert V. Barron) and Joan of Arc (Jane Wiedlin of The Go-Gos) in order to cheat on their final history exam. The script by Chris Matheson and Ed Solomon (Men in Black) isn't concerned with the ramifications of interacting with historical figures. When you're having this much fun, who cares about real-life logic — the butterfly effect, alternate timelines and parallel realities be damned! This suburban fairytale is ultimately about showing that even a pair of clueless slackers can make a significant contribution to history. Enjoyed today as a cult comedy classic, the 1989 movie is a most righteous adventure through history encouraging everyone to be excellent to each other and to party on. 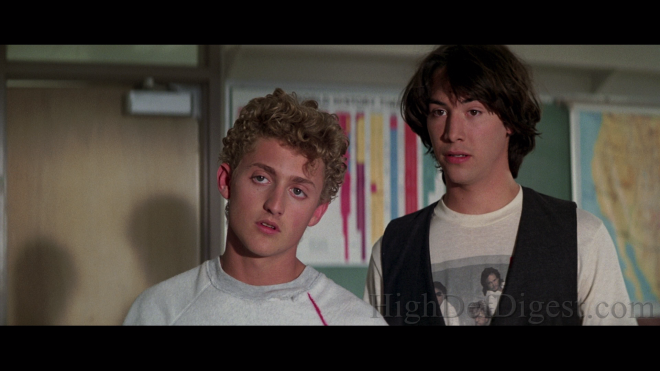 For our take on Bill & Ted's Bogus Journey, you can read our review of the Blu-ray SteelBook Edition HERE.

Shout! Factory brings Bill & Ted's Excellent Adventure to Blu-ray as a 30th Anniversary SteelBook Edition. The Region A locked, BD25 disc is housed inside a collectible SteelBook package in a very attractive combination of purple, violets and whites with the image of the iconic phone booth at the center. At startup, the disc goes to a generic menu selection along the bottom with music playing in the background and a static photo.

Bill & Ted land on time to Blu-ray with a most excellent 1080p/AVC MPEG-4 encode that dazzles and shines. The 30-year-old comedy is, of course, starting to show its age and a few scenes are a tad softer than others, but for a majority of the time, the picture is in great condition. Fine object and textural details are sharply rendered with clean, well-defined lines in the costumes, foliage and in the various locales through time. Exterior shots come with exceptional clarity and visibility in the distance, and a thinly-layered grain structure gives the movie a welcomed film-like presentation. Colors are bold with rich saturation in the primaries, and skin tones come with a natural hue. Contrast is crisp and vibrant with clean whites, and black levels are accurate with strong shadow delineation.

In the end, the cult comedy eans an A for best overall presentation. (Video Rating: 82/100)

The Wyld Stallyns rock out with a most triumphant pair of DTS-HD MA soundtracks: the original 2.0 stereo track and a 5.1 surround sound alternative. Granted, neither option is the type to push your system to the edge or test its capabilities, but then again, it was never meant to in the first place. Basically, there's not really a whole lot going on in the rear speakers, if anything at all, since the audio has always been more of a stereo track, so you can't go wrong with either choice.

Remaining faithful to the film's original design, this is a very front-heavy presentation with excellent channel separation and balance. Imaging feels very broad and welcoming with convincing off-screen effects and directionality. Music spreads evenly across the entire soundstage with clean acoustics and fidelity. Dynamic range is precise and smooth with plenty of intelligible detail and clarity, providing the movie with an appreciable sense of space and presence. The low-end is not all that aggressive, which is none too surprising, but it's appropriate to the action and accurately responsive. Dialogue is crisp and distinct in the center, making this lossless mix a most excellent presentation of a fun movie. (Audio Rating: 84/100)

Bill & Ted's Excellent Adventure has stood the test of time and remains a hilariously entertaining hit that follows a pair of righteous dudes through history. Starring Keanu Reeves, Alex Winters and George Carlin, the cult comedy classic is one of the most triumphantly awesome time-traveling movies, made purely for laughs and flying against the face of logic in a vintage phone booth. Shout! Factory celebrates the movie's 30th Anniversary on Blu-ray in a collector's SteelBook package with a most excellent audio and video presentation. Featuring a pair of new commentary tracks and an engaging retrospective, this is a great HD edition recommended for the whole family looking for a phone booth of laughs and fun.

Sale Price 29.97
Buy Now
3rd Party 29.96
In Stock.
See what people are saying about this story or others
See Comments in Forum
Previous Next
Pre-Orders
Tomorrow's latest releases