"This slam-bang melodrama of troubled love, murder and unique revenge in a sleazy nightclub" (Cue) is a noir classic filled with "suspense" (Los Angeles Time), "dramatic punch" (Motion Picture Herald) and a "macabre demonstration of a wildly jealous man who is bent on ruining two lives" (The Hollywood Reporter).

Jefty Robbins (Richard Widmark) owns a roadhouse near the Canadian border which is managed by his playboy buddy Pete Morgan (Cornel Wilde) and cashier Susie Smith (Celeste Holm). After a trip to Chicago, Jefty brings back Lily Stevens (Ida Lupino), chanteuse with whom he is obviously smitten. At first Pete is loathe to hire another one of Jefty's girls but Lily proves her talent is worth the paycheck. When Jefty goes on a hunting trip with some pals and prepares to ask Lily to marry him, Pete and Lily share some intimate time together and realize they are in love. The news sends Jefty into a psychopathic tailspin. He devises a plan to frame Pete and manically begins a game of endless and brutality, making "the lovers suffer and suffer - until their cup of bitterness runs over" (Daily News)!

Forty-one years before Patrick Swayze bounced into the Double Deuce, another 'Road House' gave audiences a thrill. A relative in name only to the 1989 film, director Jean Negulesco's steamy tale of stormy passions starring the formidable quartet of Ida Lupino, Cornel Wilde, Celeste Holm, and Richard Widmark scorched the screen in 1948. Straightforward in tone, but simmering with interpersonal tension, this 'Road House' maintains a tight focus, and its tough, no-nonsense presentation and strong performances cement its reputation as a high-quality film noir.

Somehow, though, 'Road House' never achieved the popularity it so richly deserves. The movie faded into obscurity after its initial release, and even the hearty praise heaped upon it by film noir scholars over the ensuing decades hasn't enhanced its name recognition. I remember catching 'Road House' on TV quite by accident decades ago. I tuned in because of the stellar cast, but the taut story held my interest. And that climax! Eerie, explosive, and utterly gripping, it ranks right up there with the best finishes in the genre.

The sleepy town where most of the action transpires is the film's only sedate element, and on its dreary outskirts sits Jefty's Road House, a bustling hangout that combines a bar and bowling alley. Two buddies run the joint. The handsome, level-headed Pete (Wilde) is practical and business-like, while the hot-headed Jefty (Widmark) is a romantic dreamer who gets carried away by grand illusions. Outwardly charming, but tough as nails underneath, Jefty knows what he wants and goes after it, no matter the consequences.

And what he wants is Lily (Lupino), a second-rate, chain-smoking lounge singer from Chicago. Jefty impulsively hires the cynical, defiant dame to increase business, and promises her a hefty salary, much to the chagrin of Pete, who tries to pay her off and send her back to the Windy City. But Lily digs in her heels and stays. Jefty falls hard for her and plans to propose marriage, but Lily takes a shine to Pete, who at first rebuffs her advances, then realizes he loves her. And when Pete gets wind of their clandestine affair, he becomes unhinged, and hatches a diabolical plot to make both of them pay for their betrayals.

Distinguished by snappy dialogue and richly drawn characters, 'Road House' quickly draws us into its stifling small-town setting, where heightened emotions steadily percolate until they boil over. And in a performance brimming with a feverish fervor, Widmark leads the charge. The previous year, he made a huge splash in his film debut, 'Kiss of Death,' playing a psycopathic hitman with a maniacal giggle who memorably disposes of a wheelchair-ridden Mildred Dunnock by pushing her down a flight of stairs. Widmark recycles the giggle here to great - and grating - effect, going crazily over the top as he fashions a creepy, pitiable, yet deliciously vicious portrait of broken-hearted vengeance.

Widmark commands attention whenever he's on screen, but so too does Lupino, who, like the film, never quite received the recognition she deserved. Always in the shadow of Bette Davis and Ann Sheridan at Warner Bros, Lupino left that studio seeking juicier roles, and she got one in 'Road House.' Oozing attitude and a sullen sex appeal, she stands up to both Widmark and Wilde, alternating petulance with a hard-knocks sensitivity that makes her been-around-the-block character sympathetic. She also gets a chance to show off her smoky vocals in a couple of half-sung, half-spoken tunes that fit Lily's marginal talent well. As Susie, Jefty's fresh-faced, perky accountant, wryly quips, "She does more without a voice than anybody I ever heard!"

Winningly played by Holm, Susie is the good-hearted glue that tries to hold the splintering trio of Pete, Lily, and Jefty together, despite her unrequited feelings for Pete, who doesn't give her a second look. The part might have seemed like a booby prize to Holm, who had just come off a Best Supporting Actress Oscar win for the anti-Semitic drama 'Gentlemen's Agreement,' but she makes the most of it, instantly garnering our affection and, later, concern when she puts herself in jeopardy to save Lily and Pete.

Though some of the plot points don't ring true, they at least lead up to a memorable finale that allows 'Road House' to make a lasting impression. The last 15 minutes are about as gripping as film noir gets, combining suspense, violence, and a hint of operatic tragedy to create a stunning set piece. 'Road House' may not meet every criteria on the noir checklist, but this highly entertaining, well-executed film is faithful enough to the genre to make a potent statement and warrant its long overdue rediscovery. 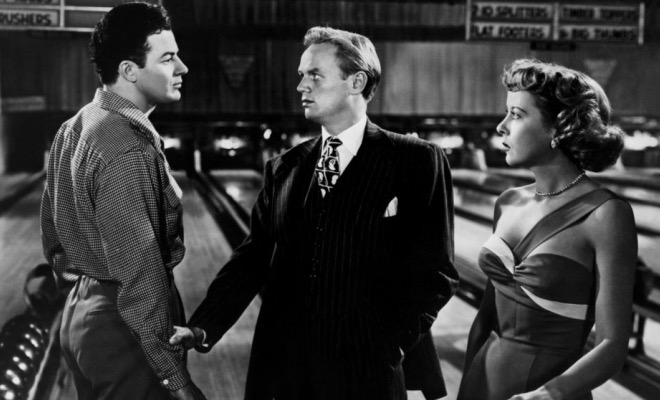 The 1948 version of 'Road House' arrives on Blu-ray packaged in a standard case. Video codec is 1080p/AVC MPEG-4 and audio is DTS-HD Master Audio 2.0 mono. Once the disc is inserted into the player, the static menu without music immediately pops up; no previews or promos precede it.

'Road House' is more of a narrative noir than a stylistic noir, but Kino Lorber's 1080p/AVC MPEG-4 transfer nicely honors the film's straightforward presentation and Joseph LaShelle's naturalistic cinematography. Solid contrast and clarity bring subtle details to the forefront, and a lovely grain structure preserves the celluloid feel while complementing the gritty story. Black levels are rich, yet lack the inky quality that makes the picture pop, but superior gray scale variance helps the image achieve a well-balanced look. Close-ups are wonderfully sharp, highlighting the beauty of Lupino and Holm, Wilde's chiseled features, and Widmark's wild-eyed intensity, and only a couple of errant marks dot the otherwise pristine source material. No crush or noise crop up, even during nocturnal scenes, and any digital tinkering escapes notice. I've seen better noir transfers, but this is a commendable effort that serves this tense film well.

The DTS-HD Master Audio 2.0 mono track supplies clear, well-modulated sound that fills the room with ease. Sonic accents, such as gunfire, revving boat motors, and the clatter of falling bowling pins, are clear and distinct, and a wide dynamic scale nicely manages all the highs and lows while keeping distortion at bay. All the dialogue is easy to comprehend, and the music score by Cyril Mockridge sounds full and robust. Best of all, no age-related defects like hiss, pops, and crackles intrude. Though not incredibly active, the 'Road House' track is clean and efficient, and it nicely complements the narrative without overwhelming it.

All the extras from the 2008 Fox Film Noir DVD have been ported over to this Blu-ray release.

Other film noirs may have more cachet, but 'Road House' remains a tough, often sassy genre entry that features a quartet of strong performances, an involving story, and a humdinger of a climax. Not to be confused with the rough-and-tumble Patrick Swayze flick from 1989 (the title is the only similarity), this hot-blooded love triangle is fueled by sexual tension and brutal confrontations, but a biting cynical edge adds some welcome spice. Solid video and audio transfers and all the supplements from the previous DVD distinguish Kino Lorber's Blu-ray presentation, which revives interest in this underrated and underappreciated film. If you're a noir aficionado, you owe it to yourself to check out this taut, steamy gem. Recommended.

Sale Price 16.49
List Price 29.95
Buy Now
3rd Party 11.44
In Stock.
See what people are saying about this story or others
See Comments in Forum
Previous Next
Pre-Orders
Tomorrow's latest releases