Zoolander No. 2: The Magnum Edition

Derek and Hansel are modelling again when an opposing company attempts to take them out from the business.

Given the goofball absurdity of the first movie, it shouldn't be any surprise that 'Zoolander No.2' delivers much of the same burlesque humor and tomfoolery — a mix of incisive jabs at the fashion industry and cultural references that are just plain stupid. For many, this is precisely the problem with the sequel, either failing to exceed those expectations or underwhelming altogether. However, the devoted fandom of dimwitted supermodel Derek Zoolander — those largely responsible for turning Ben Stiller's 2001 critical flop into a cult classic — will be generally pleased with the outcome. Essentially, it's much of the same but with a couple new twists, verbal wisecracks, elbow to the ribs nudges, and many silly nonsensical cameos — Kiefer Sutherland and Susan Sarandon as participants at an orgy is a highlight. Some of the jokes are a riot while others fall completely flat. Sorry, Billy Zane, but you're irrelevant.

Picking up fifteen years later, Stiller reprises the role as Derek, who's retired from the limelight and living off the grid — or as he refers to it, the life of a hermit crab — after his well-intentioned school collapsed due to poor construction. These opening moments, along with an action sequence involving Justin Bieber dying in front of Sting's house, not only set the tone for the rest of the movie but serve as a viewer's tolerance test. I chuckled my way through most of it and was pleasantly amused. On the other hand, Benedict Cumberbatch's surprise appearance as the long-haired, eyebrowless, androgynous supermodel All will stand as the most outrageous and genuinely memorable bit. 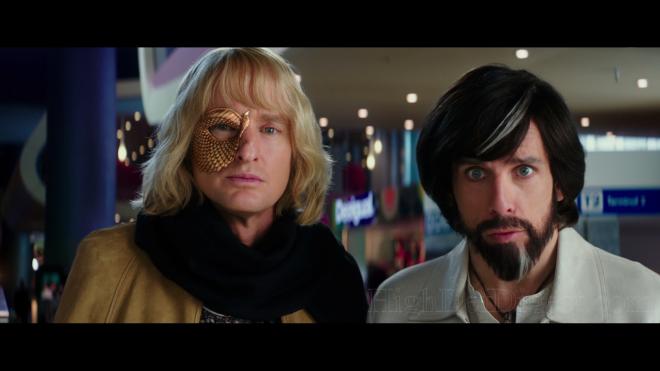 By contrast, Zane's bland and unfunny cameo is purely plot device, the catalyst urging Derek out of hiding and heralding the surly, bearded, but still ridiculously good looking supermodel to his adventure, which entails yet another fashion conspiracy. Only this time, it involves the death of music pop stars from all around the world. Aiding our thick-skulled hero on his journey is Hansel (a very enthusiastic and game Owen Wilson), who also went into seclusion after the accident left him horribly disfigured and wearing a decorative eye-patch, a puerile gag that will have some laughing at the idiocy while leaving others wondering why they are still watching. And just as before, the braindead pair blunder their way to the truth by accident, discovering Mugatu (Will Ferrell) as the mastermind while behind bars — and that's not a spoiler since the trailers already revealed that little tidbit. Penélope Cruz joins the fray as agent Valentina Valencia, a former swimsuit model now working for Interpol in the fashion crime division, and the beautiful Cruz is in on the gag as love-interest eyecandy — and apparently as a floating device.

The plot of 'Zoolander No.2,' which was co-written by Stiller (who also directs) is an overly elaborate and convoluted scheme about the Fountain of Youth. It's a tangled silliness aspiring to the level of a spy thriller in the vein of the Bond films but with the puzzle-solving intrigue akin to 'The Da Vinci Code.' However, it doesn't really make much sense by the film's end, making Cyrus Arnold's character as Derek's estranged son rather pointless aside from allowing jokes about the kid's stocky unattractiveness. Nevertheless, our trio of would-be heroes unravel the mystery only to discover the conspiracy was in actuality a red-herring ruse, jarringly shifting the story into a standard revenge plot that only succeeds at generating confusion, if not frustration from even the most loyal of Zoolander followers. The only characters arguably escaping the lunacy unscathed are Kyle Mooney as a hilarious designer speaking an indecipherable language that sounds like English and a completely unrecognizable Kristen Wiig as a fashion goddess whose continued pursuit of youth at the hands of plastic surgery has rendered her incapable of smiling. In essence, this pair serves as our metaphor for the appropriate reaction to 'Zoolander No.2.'

Paramount Home Entertainment brings 'Zoolander No.2' to Blu-ray as a two-disc combo pack with a code for an UltraViolet Digital Copy. Codenamed "The Magnum Edition," the Region Free, BD50 disc contains the unrated version of the movie, which doesn't add more minutes to the original runtime but shows blood and a bit more vulgar jokes. It sits comfortably opposite a DVD-9 copy inside a blue eco-cutout case with a glossy slipcover. At startup, viewers are taken straight to the usual menu options with full-motion clips and music playing in the background.

Derek and Hansel strut their stuff on the Blu-ray runaway with a really, really, really ridiculously good looking 1080p/AVC MPEG-4 encode, but like the tiny scar beneath Hansel's right eye, the transfer comes with some minor blemishes. Thankfully, some of these largely inconsequential defects are not enough to ruin the presentation's stronger aspects, but it's worth mentioning there a few scenes noticeably softer than others, despite being shot entirely on highly-quality digital cameras. On the whole, the stones and bricks lining the streets and buildings of Rome are sharply defined, revealing the tiniest little crack and imperfection, while the fine lines of clothing, hair and in the faces of the cast remain plainly visible. At times, the picture is so good that one could almost make out where facial prosthetics were glued onto Kristen Wiig and see the wrinkled damage of tanning around Owen Wilson's neck. But compared to that, some scenes suddenly appear softer and don't seem related to any intended photographic style.

Presented in its original 2.35:1 aspect ratio, the freshly-minted transfer displays a wide range of full-bodied colors, which should be expected from a comedy about fashion and modeling. Richly saturated primaries practically radiate and pulse from the screen, giving the entire production a buoyant, energetic feel that's infectious. And the softer pastel hues emanate with brilliance, keeping things in high spirits even during the movie's darkest sequences, like the silly confetti bomb while in Mugatu's underground lair. However, flesh tones appear a tad exaggerated and reddish in several areas, which may or may not be a result of the golden-amber cinematography of Dan Mindel. Spot-on contrast keeps things bright and pleasant with excellent visibility of the objects in the far distance. Black levels are also true and rich with deep, penetrating shadows and outstanding gradational details in many scenes, adding a good deal of depth and providing the film with a welcomed cinematic appeal fans will love.

Speeding up the tempo and confusing poor hermit crab Derek with the latest technological trends is an awesome, highly-quality DTS:X soundtrack that will surprisingly have the house rumbling and cracking up from the silly action. For those not equipped for the new codec, the track defaults to the standard 7.1 English DTS-HD Master Audio, which is just as strong and satisfying as its object-based counterpart.

Granted, being a comedy, the sound design won't exactly wow listeners in the same way an action flick would, but it nonetheless does a great job in breathing some life into the story and there is enough action to take advantage of the new format. The sound of helicopter blades fly overhead and reverberate all around, bullets whiz from the screen to the back of the room with convincing effectiveness, and motorcycles zoom from surround channel to the next with flawless panning and fluid movement. From the jiggling whispers of the people at the humiliating runway show to the faint chirping of birds in the distance, atmospherics echo throughout during the quieter moments, keeping things lively and active while nicely adding to a satisfying soundfield. It's not always consistent, considering the film's genre, but when those bursts of action erupt on the screen, the lossless mix creates an amusing and immersive dome-like effect.

Much of the story understandably takes place in the front soundstage, which still manages to impress on several occasions, generating a spacious and expansive sense of presence that's terrifically engaging. One can easily hear engineers taking advantage of the new codec when distinct, intelligible vocals appear to effortless migrate from one side of the room to the other, such as the conversation between Derek and Billy Zane, establishing a very cool three-dimensional sense of space. Theodore Shapiro's score and the many song selections also benefit with the music subtly bleeding into the front height channels, creating a very welcoming half-dome soundscape that's quite constant and stable. The mid-range is clean and detailed, even during the loudest segments, while effects discretely and convincingly move across all three channels. Best of all is a low-end that's often thunderous and authoritative, providing each explosion, gunshot and action sequence with a rich range of bass and serious oomph (bass chart).

Given the absurdity of the first movie, 'Zoolander No.2' delivers much of the same burlesque humor and tomfoolery, but it will be divisive even amongst the most loyal of fans. It's a mix of incisive jabs at the fashion industry and cultural references that are just plain stupid, along with little bursts of inspired humor undermined by absurd jokes that just fall flat. The Blu-ray features excellent audio and video, but the supplements leave a great deal to be desired. In the end, the overall package will only attract devoted fans of the original, while those on the fence will want to rent before deciding on a purchase.

Sale Price 9.94
Buy Now
3rd Party 5.95
In Stock.
See what people are saying about this story or others
See Comments in Forum
Previous Next
Pre-Orders
Tomorrow's latest releases