Clear the runway for Derek Zoolander (Stiller), VH1's three-time Male Model of the Year. His face falls, though, when hippie-chic Hansel (Owen Wilson) scooters in to steal the latest award. Meanwhile, the evil fashion mogul Mugatu (Will Ferrell) seizes the opportunity to brainwash Derek, turning him into a killing machine that, when triggered, will assassinate the Prime Minister of Malaysia. With the help of the beautiful journalist Matilda (Christine Taylor), Derek races to keep the world safe for male models everywhere.

The release will include new hilarious footage of Owen Wilson and Justin Theroux rehearsing the epic breakdance fight under the direction of Ben Stiller and an alternate version of the brainwashing sequence told through storyboards. The release also includes previously released special features, a collectible Zoolander headband embellished with Derek's world-famous coif, a look at Zoolander No. 2 and Movie Money worth up to $8.00 towards a ticket to see the new film in theaters.

A goofball blend of mild seriousness and over-the-top slapstick parody in the vein of the 'Airplane!' and 'The Naked Gun' movies, 'Zoolander' is a sly, clever melding of satire and spoof where neither comedic style outdoes the other but manages a harmonized balance until the final laugh-out-loud moment. It may not — and likely won't — cater to everyone's particular brand of comedy, anyone who doesn't care for the outrageously absurd, physical gags caused by blundering idiots and the bumbling stupidity of the protagonist. Over the years, since the movie's release in September 2001, I've met plenty who don't see the humor and read scathing articles hating this Ben Stiller-helmed production about the assassination of Malaysia's Prime Minister (Woodrow W. Asai) because he promises to end child labor, most notorious is Roger Ebert's well-intentioned rant. Other concerns point a finger at following an imbecilic supermodel as the central hero who defeats the conspiracy.

As the saying very loosely goes, however, looking at the trees is to miss the forest. Focusing on the intricacies and a dislike of certain details essentially ignores the bigger picture. In this case, that's Stiller and his team using the smaller funny bits — some of which can admittedly feel disjointed and rambling — to construct a larger whole. It's a high-wire act of hyperbolic absurdity, a spectacle of unexpected pratfalls and farcical irony functioning together to bring light to a serious issue. On the surface, the three comedic styles — parody, spoof and satire — seem much too similar to be indistinguishable, often used interchangeably by the public, but they are quite different from each other, especially in their approach to the intended object of mockery. At first, it may seem the filmmakers make light of a troubling problem that negatively affects Third World countries, but the joke is not on the underage labor force. The movie ridicules the tragic, willful ignorance of society, a voluntary, apathetic acceptance of its tragic reality for the sake of being fashionable and trendy.

Here, Stiller, who cowrote the script with Emmy-nominated stand-up comedian Drake Sather and John Hamburg ('Meet the Parents,' 'I Love You, Man'), satirizes the fashion industry's dependency on child labor by exaggerating some truths within the world of high-end fashion while spoofing the conventions of espionage action thrillers. Our hero Derek Zoolander, played by Stiller to hilariously memorable perfection, must be a blundering, incompetent dolt because it serves for a better story seeing him slowly realize he must do the right thing. Granted, as the world-renowned exemplar of male supermodels, choosing to do the right thing is largely due to selfish reasons, mostly that he wants to remain incredibly good looking and continue modeling. But after losing a coveted award and embarrassed by a prominent magazine, Derek displays his big-hearted and well-meaning side in one of the film's most sidesplitting moments where he stupidly confuses a miniature model of his dream charity school for the real thing. To this day, that scene still cracks me up to no end. 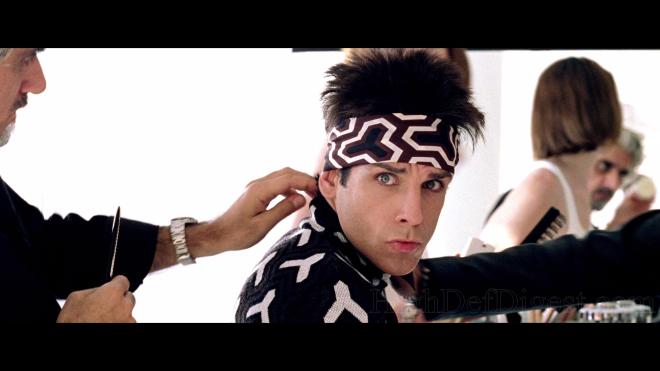 The man responsible for making Derek's dream of building the "Center for Kids Who Can’t Read Good" — which is a hysterical joke on insensitive poor grammar — come true is the flamboyant fashion mogul Mugatu (Will Ferrell). Ferrell not only plays the character as an exaggerated caricature of the industry as a whole, but he makes an awesomely memorable villainous foil behind the assassination plot. In order to take him down, Derek requires the assistance of equally harebrained model Hansel (Owen Wilson) and the ten-times smarter investigative reporter Matilda (Christine Taylor). Much of the dialogue between them all is riddled with rapid-fire puns and various witty remarks, such as Hansel mistaking bulimia for psychic abilities or Derek mispronouncing eulogy. The silly shenanigans and overall nonsense come out of left field, surprising the audience with one gag after ridiculous gag as if always wanting to top the previous joke, never really letting up until the moment when Derek finally unleashes his "Magnum" pose for all the world to see.

'Zoolander' is the sort of slapstick comedy that has just about as many detractors as it does defenders, to which I unabashedly include myself, and it failed to make much an impact at the box office, hitting theaters only two weeks after the events of September 11th. Nevertheless, the dimwitted supermodel hero has found his place in the world within the home video market, garnering a strong cult following that has come to appreciate his unique brand of satirical silliness and over-the-top spoofing. For this fan, Stiller's film continues to induce laughter, replete with several unforgettable side-splitting moments, such as the "freak gasoline-fight accident" sequence made to look like an expensive Tommy Hilfiger advertisement. It's surprising to think what started as a goof of two short videos for the VH1 Fashion Awards ("Derek Zoolander: Male Model" and "Derek Zoolander University") has grown into a cult favorite with a sequel hitting theaters fifteen years later. This fact is about as shocking as seeing an "abo-diginals" become successful male models.

Paramount Home Entertainment brings 'Zoolander' in a really, really, ridiculously good looking steelbook gift-set package with a code for an UltraViolet Digital Copy and a free movie ticket for the sequel valued at $8. Comically dubbed "The Blue Steelbook," the package also includes a headband with spiky hair attached along the top. At startup, viewers are taken straight to the usual menu options with full-motion clips and a modern cover of Frankie Goes to Hollywood's "Relax."

Derek poses for the Blu-ray lens with a strong 1080p/AVC MPEG-4 encode that shows a marked improvement over its DVD counterpart, but sadly, it comes with a few notable issues.

Looking sleeker and more chic than on previous runway shows, the overall picture is brighter and more energetic, which will have some viewers thinking this walk-off possibly coming from a new remaster. However, it soon becomes apparent that it's the same old piano necktie posing as a trendy retro fashion statement. Contrast has been bumped up slightly and generally runs hot in several areas, causing some minor blooming, very mild posterization and some hot spots that sometimes ruin the finer details. This affects brightness levels by making blacks come off stronger than acceptable, creating many instances of crush around clothing and hair while shadows tend to obscure background information. Turning a blind eye to blurriness caused by the editing and optical effects, several moments are also softer than others.

Thankfully, this is not a persisting problem as a good chunk of the presentation appears fairly sharp and well-defined. The 2.40:1 image can be quite revealing in many spots, particularly close-ups of the faces, which expose pores, wrinkles and other negligible blemishes. The overall palette is animated with spirited, richly saturated primaries, which complements the film's goofiness perfectly. Looking a bit tired and aged but not out of the modeling game yet, Derek can surely use a week at the day spa.

Where Derek really shows off his versatility is in the audio department, mostly thanks to a solid, rocking selection of classic songs.

Although a mostly front-heavy presentation, the DTS-HD MA soundtrack is energetic and lively, with lots going on in any given moment. Of course, much of that takes place in the front soundstage where off-screen effects are convincing and move from one side of the screen to the other with excellent panning and directionality. Dynamic range is clean and crisp throughout, creating a great sense of space and presence with appreciably detailed fidelity and warmth. A punchy, nicely responsive low-end provides weight and depth to each song and the many goofy bits of action. The rears are occasionally employed with mild atmospherics that satisfyingly expand the soundfield and fill the room with awesome 80s tunes and the cheers of the crowd witnessing the modeling fiasco.

'Zoolander' is the sort of slapstick satire that has just about as many detractors as it does defenders, to which I unabashedly include myself, but the comedy is an outrageously absurd and hilarious adventure that follows a pair of blundering idiots stopping an assassination plot. Over the years, it has amassed a loyal cult following that a sequel was practically inevitable. For this special Blu-ray edition, the movie arrives with a sure to satisfy audio and video presentation, but supplemental material mostly remains the same. Nevertheless, the overall giftset package is probably more than enough to have fans discover there's more to life than being ridiculously good looking.