It will make your flesh crawl … Executive Producer Eli Roth presents Cabin Fever, a reboot of his instant classic gorefest. Featuring all-new characters and all-new kills, Cabin Fever also includes the featurette “The Making of Cabin Fever” and theatrical trailer as bonus features.  This story is familiar: Just out of college, a group of five friends retreat to a remote cabin in the woods for one last week of partying – only to become snacks for a gruesome, flesh-eating virus. This fresh spin on a horror-comedy milestone stars Gage Golightly (Exeter, Teen Wolf), Nadine Crocker (Deadgirl), Samuel Davis (Machete Kills, Sin City: A Dame to Kill For) and Dustin Ingram (Paranormal Activity 3).

After two failed attempts at establishing Eli Roth's "gore-tacular" contagion flick 'Cabin Fever,' which also marks as his directorial debut, into a profitable franchise, studio heads turn to the current Hollywood trend of remaking/rebooting recent movies. Never mind the original is barely a couple decades old. In this new digital world where information and gossip spreads quicker than a deadly infectious disease, the last decade is very old news, and this is NOW, where perhaps a new — read younger — generation can discover Roth's vomit-inducing horror comedy for the first time. (Again, never mind kids can just as easily rent, stream or torrent the original from practically anywhere there is a Wi-Fi signal.) The last two entries in the series — one, a direct follow-up sequel, and another, a prequel leading to the events of the first — went pretty much unnoticed by horror-hounds and are now all but forgotten. A fourth installment was in the works, but eventually scrapped in favor of kickstarting the entire franchise from scratch. Unfortunately, what came out of that decision is a beat-for-beat duplicate of the original, more likely to induce yawns than a gross-out feeling of upchucking one's dinner.

With Roth now serving as producer, it probably isn't of much surprise little has been altered from the original script. In fact, he and Randy Pearlstein are credited as the writers for this production, suggesting that the same screenplay was used. Only, the story's been updated for today's moviegoers, such as a single-shot rifle changed to a high-capacity assault rifle, the mention of cellphones and the lack of service, making them pointless. The same group of five college kids on spring break — this time played by Samuel Davis, Gage Golightly, Matthew Daddario, Nadine Crocker and Dustin Ingram — travel to a remote cabin when they are exposed to a flesh-eating virus that turns the friends against each other. It reminds of Gus Van Sant's 1998 shot-for-shot remake of Alfred Hitchcock's massively influential 'Psycho.' However, whereas Van Sant defends his film as an experiment to recapture the allure and appeal of the original, this near-identical rehash meanders about without purpose, skipping from one gruesome scene to the next while foolishly substituting blood and gore for suspense and tension. 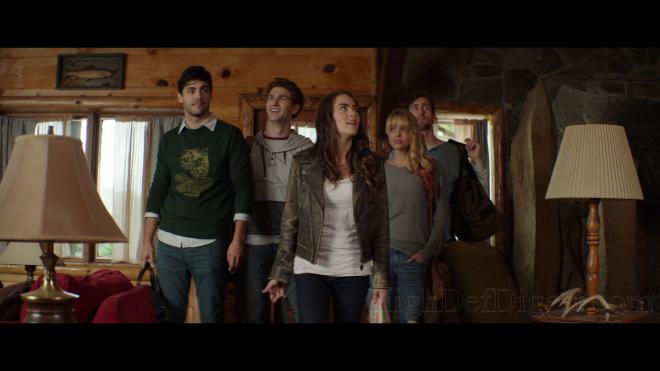 A big part of this movie's failure begins with the fact that the first movie wasn't all that great to begin with, or at least, memorable enough to warrant a remake/reboot. Yet, in spite of working from the same script and with the full support of the original creator, this low-budget production somehow manages to be worse and also weirder than its predecessor and the two awful installments. Why in the world any studio would want to waste money on this is a bigger mystery than the origins of the ferocious virus, which leaves its victims with oozingly repulsive, festering lesions around some of the most cringe-inducing areas of the body. But having to sit through scenes meant to nauseate audiences are of little to no consequence when the characters are so unattractively annoying and obnoxious, which has about as much to do with the actors over-dramatizing every line of dialogue as the way the characters are written. At least in the original, Rider Strong's Paul was the likable virgin, but in this version, Samuel Davis could just as easily be replaced by a cardboard box with a voiceover by David Attenborough and no one would be the wiser.

Directing duties are handed over to relative newcomer Travis Zariwny, who's done nothing of note and whose only notable film credits are as miscellaneous crew in better known projects. It's unknown how or why he landed such an important role, but apparently changing his name to Travis Z because it probably looks cooler and edgier warranted enough reason. In either case, one or two sequences reveal some competency behind the camera, but it's hard to tell sometimes when he appears more intent on simply imitating Roth's camerawork. Or, as in one very obvious instance, he blatantly copies the opening of Stanley Kubrick's 'The Shinning' with similar aerial shots and the same haunting music of Wendy Carlos & Rachel Elkind. Annoyingly, this is a bit of head-scratcher since there is absolutely no point in such an opening other than this would-be director just could and thought it might as cool as his new name. But that's how much of this production goes. It ultimately serves no purpose and doesn't offer anything for moviegoers, let alone genre fans. Ultimately, it's best to quarantine this lame, infected forgery and keep it as far away from every coming in contact with other, far superior horror movies.

Shout! Factory brings 'Cabin Fever (2016)' to Blu-ray under the distributor's Scream Factory line. The Region A locked, BD25 disc is housed inside the normal blue case. At startup, the disc goes to a generic menu with full-motion clips and music playing in the background.

The remake-slash-reboot spews its gory innards all over Blu-ray with a stunning 1080p/AVC MPEG-4 encode, showcasing a number of scenes that could easily serve as reference quality.

Many of those involve beautiful wide shots of the cabin and the lake, capturing it's idyllic sereneness with razor sharp definition in the surrounding foliage. Even from a distance, individual leaves and blades of grass are distinct and can be seen blowing in the wind independently of each other while every thread and stitch in the clothing is detailed and apparent. Facial complexions appear healthy with excellent lifelike textures that reveal each pore, open sore and repugnant boil growing on those darn no-good kids. The high-def transfer is also awash with a rich, sumptuous array of primaries, making the green of trees pop with energy, the blue sky burst with life and the gruesome gore all the more repulsive. Contrast is comfortably bright with brilliant, crisp whites in nearly every scene, allowing for clean visibility of the grisly special effects, but there are a couple minor moments when highlights come off a tad too strong.

Presented in its original 2.35:1 aspect ratio, the one area holding the presentation back from a perfect score is related to the cinematography. Shot entirely on HD cameras, the video lacks texture and character, looking much too sterile and digital, which doesn't work in the movie's favor. There are also a couple instances of minor banding during some of the nighttime sequences. Black levels are, for the most part, full-bodied and inky rich with strong shadow details, providing the image with nice three-dimensional depth, but a couple scenes look a tiny bit faded and flat.

The low-budget production also contaminates home video with a highly-enjoyable and infectious DTS-HD Master Audio soundtrack with several surprisingly immersive moments. With the plot being set out in the wilderness, the surrounds are continuously employed, filling the room with the sound of wind blowing through the leaves. It's a very subtle effect but pretty amusing nonetheless, with other minor atmospherics occasionally joining in. A large oncoming storm in the second half of the movie is the design's strongest and best moment with thunder booming and reverberating all around, awesomely enveloping the listening area. When applying the upmixing function in the receiver, those same moments convincingly bleed into the ceiling speakers as lightning cracks and roars overhead. However, there are a couple times when such scenes also feel a tad forced and somewhat loud, but thankfully nothing too displeasing.

On the whole, the lossless mix is really a front-heavy presentation, generating an engagingly broad and spacious soundstage. Imaging exhibits distinct, room-penetrating clarity throughout thanks to an extensive mid-range that delivers excellent separation in the higher frequencies. The low-end doesn't dig particularly deep, which is apparent during some of the action sequences and the aforementioned thunderstorm scenes. Still, bass is weighty and palpable, providing the high-rez track with a couple appreciable rumbling moments. With intelligible and well-prioritized vocals, the soundtrack offers more to enjoy than the movie itself.

After two failed attempts to make Eli Roth's "gore-tacular" directorial debut into a profitable franchise, studio heads reboot the contagion flick 'Cabin Fever' for a new generation of moviegoers. However, this remake is a beat-for-beat copy of the original that somehow manages to be worse with an even more unattractively annoying and obnoxious group of kids. The Blu-ray from Scream Factory arrives with an excellent audio and video presentation that somewhat makes up for the terrible movie. Offering even less in the supplements department, the overall package is a good disc, bad flick but ultimately, this remake/reboot can be ignored just like the previous two entries.

Sale Price 19.67
List Price 22.97
Buy Now
3rd Party 17.7
In Stock.
See what people are saying about this story or others
See Comments in Forum
Previous Next
Pre-Orders
Tomorrow's latest releases