Jeff, Karen, Paul, Marcy and Bert embark on a vacation deep into the mountains. With the top down and the music up, they drive to a remote cabin to enjoy their last days of decadence after college. Then somebody gets sick. Karen's skin starts to bubble and burn as something grows inside her, tunneling beneath her flesh. As the others try to save her, they look at one another and realize that any one of them could be next. One by one they turn on each other and the rest of the town... realizing that the disease is the least of their problems.

In retrospect, Eli Roth's 'Cabin Fever' isn't all that bad, even displaying a bit of clever wit as it sloppily dissects and almost mocks the very genre to which it aspires to pay homage. After years of endless rehashes, each dreadfully worse than the last, we can look back at Roth's directorial debut with at least the tiniest bit of appreciation. The low-budget flick's use of a common social fear situated in a formulaic plot is somewhat smart and inventive, which is not to suggest that the movie is all that original or greatly entertaining either. Actually, its poor direction, acting, and overt use of horror conventions, make it only slightly above average. The movie is really meant to be enjoyed as a humorously gory and repulsive celebration of the genre and not as pushing any boundaries.

'Cabin Fever' starts off in typical fashion, with our introduction to a really annoying group of young college friends. Paul (Rider Strong) is the reserved, modest guy in love with his childhood friend, Karen (Jordan Ladd), who plays the spunky good girl. Bert (James DeBello) is the crude jokester lacking social manners, who looks like a jock, though it's never clear he plays any sports. Jeff (Joey Kern) and Marcy (Cerina Vincent) are the archetypal college couple: attractive, self-centered and most importantly, sexually active with a freaky side. For added measure (or maybe to just drive the point home), writer/director Eli Roth includes a few local bumpkins, a karate "Pancakes!" kid with a really rocking mullet, and a dimwitted deputy who just wants to party and acts as comic relief.

Once at the cabin, where the happy bunch go to get away from the stresses of higher education, the movie quickly strays from the predictable formula. Lurking in the dark, creepy woods is not some demonic supernatural force from 'The Evil Dead,' a machete or chainsaw-wielding maniac of the 'Friday the 13th' and 'Texas Chainsaw Massacre' series, or some wild, perverse yokels on the dangerous hunt as in 'Deliverance.' Here, the kids encounter a deadlier foe. One that is silent, invisible, and impossible to kill: contamination and disease. Within a couple of days, a horrific, flesh-eating virus spreads amongst the group and divides them into germaphobes, pitting buddy against buddy and boyfriend against girlfriend. Ooh, scary and terrifying isn't it?

Well, no, not really. In fact, it sounds kind of lame for a horror movie. Such concepts work better as a sci-fi thriller like 'Dreamcatcher' or 'Outbreak.' Oh, geez, did I just mention those. What I meant to write was 'The Andromeda Strain' or 'Invasion of the Body Snatchers'. That's really where this sort of plot can be suspenseful and even exciting. In 'Cabin Fever', the notion barely raises tension, but Roth uses it as a departure from the 70s/80s horror style he wishes to evoke. The idea is also a nice setup for some decent scenes of gore and for making viewers' skin crawl, from a crazed hermit spitting blood inside a truck to Marcy strangely wanting to shave her legs. It's these areas of the movie that work well and can be fairly creative -- even funny. But the rest of the movie is unimpressive.

It's pretty clear Roth knows his horror and really loves the genre. But he lacks writing chops and makes all his characters sound like idiots. Granted the order in which folks die, and the choices as to which characters survive, add nice comedic surprises, but the way events play out seem amateur and convenient. The little boy at the market store served no purpose other than some flying kicks and a bite on the hand. What the heck was the director's cameo for? And did Paul and Marcy really have to get it on while all their friends are dying? It's really weird stuff that just feels out of place in all the confusion. Still -- or better yet lamentably and forlornly -- this is a more original and entertaining genre entry than so much of the other garbage released to theaters in the last twelve years. Of course, we've seen better as well, but 'Cabin Fever' has earned its following and remains a cult favorite.

Lionsgate Home Entertainment brings 'Cabin Fever' to Blu-ray on a Region Free BD25 disc. It's housed in a blue eco-friendly keepcase, and the slipcover has the same pic as the poster and DVD. After a quick promo for the studio, viewers are taken to the standard menu option while creepy music plays in the background. For this Unrated Director's Cut, it appears 6 minutes of unseen footage has been added to the 92-min theatrical version. The difference may be noticeable only to fans, but I admit this cut does flow better with a smoother ending and some slight character nuances. 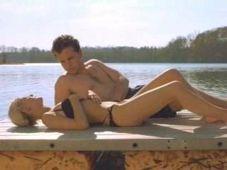 'Cabin Fever' makes its transition to the high definition format with a underwhelming and sometimes disappointing 1080p/AVC MPEG-4 encode (2.40:1). I wasn't expecting to be blown away by the picture quality given its low-budget source, but when compared to its standard definition counterpart, the improvements are minimal at best.

The transfer is not as sharp as we would expect from high-definition video, and resolution is only a slight upgrade, with many scenes looking similar to its DVD equivalent. Delineation is to some extent above average, but background information is often lost to the dark shadows. There are a couple of times when blacks really shine, but for the most part, brightness levels are on the weaker side and look flat throughout. Contrast changes tends to ruin clarity and hurt details in several outdoor sequences. Skin tones waver between healthy and flushed (this is all before the characters start to become sick), and colors are surprisingly anemic and bland, though red is of course rendered vibrantly. Arguably, this is the best Eli Roth's cult favorite has ever looked, which fans are more likely to appreciate, and might even be a good representation of its source. But sadly, 'Cabin Fever' doesn't look much different than if it were upconverted on a good quality DVD player. 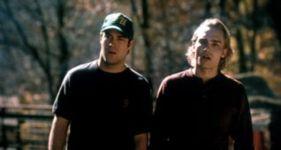 On the audio side, the little horror flick that could makes a better impression, but like the video, the jump to lossless DTS-HD Master Audio is not a significant or resounding success.

From the moment the opening credits roll, viewers are teased with the possibilities within the sound design as flies are heard slowly gathering around until a swarm fills the entire soundscape. Once the movie actually begins, things suddenly quiet down in the rear speakers and they're rarely used again, except when Karen is surrounded by flies in the latter half. The music is really the track's best aspect as it nicely enhances the soundfield into the background. But seeing as how the story is set out in the wilderness, the lack of discrete effects is apparent and disappointing. For a movie with a limited budget, one can't expect much. Then again, atmospherics are also missing within the imaging, which makes for a boring soundstage. For what little movement there is, channel separation is smooth, and dynamic range is pleasantly clear and sharp. Vocals are well-prioritized and intelligible from beginning to end, and low bass is surprisingly deep and effective. In the end, the mix is simply not all that exciting.

For this Blu-ray edition of 'Cabin Fever', the studio is nice enough to port over many of the same bonus materials found in previous DVD releases. The only things missing are "Chick Vision", a Q&A session, and all five original audio commentaries. 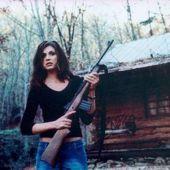 After a few years of sifting through mostly dreadful horror remakes and god-awful reimaginings, Eli Roth's directorial debut isn't looking half bad. At least 'Cabin Fever' has a close-to-original premise that's somewhat humorous while also paying homage to the 70s and 80s horror style. The Blu-ray edition of the cult favorite isn't exactly a leaps and bounds upgrade from its DVD counterpart (or even anywhere near demo worthy of high definition), but it looks and sounds good in its own right. The supplemental package not only comes with some of the extras of previous releases, but also features a couple of exclusives. In the end, this is one movie and A/V presentation that only fans can really enjoy.

Sale Price 12.24
List Price 14.99
Buy Now
3rd Party 12.24
In Stock.
See what people are saying about this story or others
See Comments in Forum
Previous Next
Pre-Orders
Tomorrow's latest releases