Man with the Gun

When a notorious tough 'town tamer' is hired by the citizenry to rid of the gunmen driving them off their land, he finds the local saloon madam to be an old friend.

"Always dresses in grey, black would fit his profession better."

Sometimes all a movie has to do to be successful is tell a simple story effectively. It doesn't matter what genre the storyteller is operating in, if you keep your elements simple, if you have your characters competently drawn out with just enough complication to keep them interesting, the movie should be a rousing success. For 1955's 'The Man With The Gun' starring Robert Mitchum and directed by Richard Wilson, a simple story of a lawman hired to clean up a troubled town is told simply but with visual flair and fine performances from a strong cast.

Life as a "Town Tamer" is a risky line of business to be in for Clint Tollinger (Robert Mitchum). You hitch your post long enough to find out that a town needs your help, get deputized, and when the job is done (should you survive) you hit the dusty trail and move on. While Clint is good at what he does and has found some measure of success at it, his real quest is to locate the long lost love of his life Nelly Bain (Jan Sterling). It just so happens the wild town he has just ridden into is where Stella has decided to set up her stable of entertaining ladies. When young hotheaded landowner Saul Atkins (Emile Meyer) is shot in the shoulder for defending his land from the ruffians hired by local bad guy Dade Holman (Joe Barry), Tollinger learns his services are badly needed.

When the town votes to deputize Tollinger and give him the run of the road to do what is necessary, they're not prepared for the one man war Tollinger is ready and willing to wage for their benefit. By enforcing a local ordinance that all weapons are to be turned into Marshal Sims (Henry Hull), Clint Tollinger now has the power he needs to arrest, and if necessary, kill any of Holman's men who disobey his orders. To help curb in-town violence even further, Tollinger puts a strict curfew in place. While this may help tame some of the rougher elements, it also puts shops and saloon owners in a tough spot - in particular Frenchy Lescaux (Ted de Corsia)

With Holman's armed goons at his front and an angry town counsel at his back, Tollinger has a bigger fight on his hands than he's prepared for. As Nelly tries to keep him safe and encourages him to put down his guns so they can truly be together, Tollinger is going to have to finish the fight. With allies in short supply, every bullet Clint Tollinger fires is going to have to count. 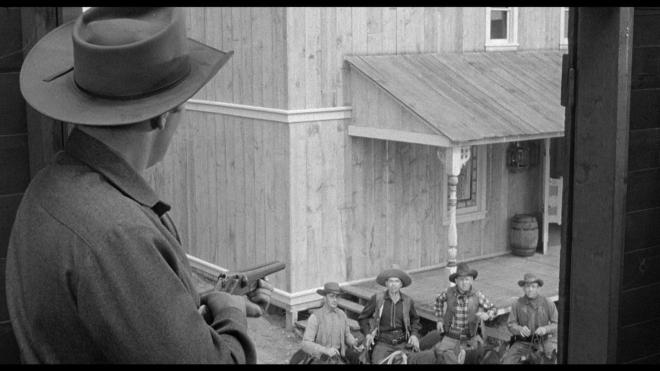 'The Man With The Gun' is a true classic era Western in the best sense. By cribbing elements of the Wyatt Earp legend, the story is able to take place on a bigger stage while keeping the scene small and tight. Director Richard Wilson did an impeccable job setting up scenarios, character development, as well as setting the stage for some thrilling action beats. At a swift 83 minutes, the film doesn't waste time with bloated character setups or needless plot contrivances. The story is simple enough and played out in the most efficient and subsequently most thrilling way possible.

Performances are spot on through and through here. Robert Mitchum owns the role as a heavy hand with a history of using his gun. As a man that has been in this spot before, Mitchum plays it like he knows all the breaks before they happen and that in effect, makes him a lethal leading man. Jan Sterling is strong and reliable as Tollinger's one true love. Their history, as well as Tollinger's job, makes their relationship a bit complicated and Sterling has a wonderful way of showing the pain of their past on her face without using any words. Joe Barry is given the short end of the stick as the town boss Dade Holman. He spends most of the film absent and then when he does show up, he has very little to do. As a human McGuffin, Holman is a bit of a wet blanket, but considering he commands the gang of killers terrorizing the town, he's still an effective threat, even if he doesn't speak a single line of dialogue.

'The Man With The Gun' is a beautifully shot and exciting Western in all of the best ways. My favorite moment is when Tollinger faces down Frenchy in the man's own saloon. Coupled with the tense score from legendary composer Alex North, the film as a whole is a great ride and one that I'm glad to have discovered. Frequent readers of High-Def Digest are probably well aware by now of my love of Westerns and this Blu-ray of 'The Man With The Gun' is a delightful discovery.

'The Man With The Gun' arrives on Blu-ray thanks to Kino Lorber and their Studio Classics line. Pressed on a Region A locked BD25 disc and housed in a standard case, the disc opens directly to a static main menu.

I love beautiful black and white cinematography, especially when it's given one hell of a grand 1.85:1 1080p transfer. Grey scales and black levels are practically perfect allowing for a wonderful sense of three-dimensional space. Black levels are appropriately and pleasingly inky throughout the film without any troublesome dips into crush territories. The real highlight of this transfer is that fine film grain has been retained and detail levels are absolutely fantastic throughout the run. Facial features, wide establishing shots, medium range shots look wonderful. For a film that's 60 years old, this is a near perfect transfer. The only thing holding back my score in the slightest way is the speckling print damage that runs throughout the film. Most of the time you can't really detect it, but when scenes take place at night or in dimly lit areas, you can see the little white flecks quite clearly. Again, considering the age of the film, the speckling is a minor quibble.

'The Man With The Gun' gets a lot of extra oomph out of its English DTS-HD MA 2.0 track. Dialogue is crystal clear and is never a struggle to hear - it shouldn't be because any spoken line is short and to the point and usually answered with gunfire. The film's sound elements including effects, dialogue, and Alex North's fantastic score have plenty of space to breathe and resonate without causing any kind of distortions. Imaging does alright, but for as great as this track is, it can sound a bit flat. The track is also free of any hiss, pops, cracks or drop outs making it a heck of an effective track.

The Wonderful Country  Trailer: (HD 2:56) There's something fun about the way movies used to be marketed, this trailer does a great job of making the movie look fun however it does show a lot of the film's major events so spoilers beware.

Man With The Gun Trailer: (HD 2:24) A classic black and white western trailer that does a solid job of setting up the flick.

Young Billy Young Trailer: (HD 2:15) The trailer does a great job of selling the action and making it look like a fun release.

'Man With The Gun' is an exciting classic Western in all of the best ways. Robert Mitchum is in his element here and gives his role as a lawman for hire plenty of weight while not overplaying his hand. Kino Lorber has brought together a heck of a great Blu-ray release featuring an absolutely stellar A/V presentation. Extras are skimpy featuring the same trio of trailers found on the 'The Wonderful Country' Blu-ray. To that end, as what amounts to a movie only release I'm calling this one recommended. Western movie fans should have a great time.

Sale Price 49.98
Buy Now
3rd Party 49.98
In Stock.
See what people are saying about this story or others
See Comments in Forum
Previous Next
Pre-Orders
Tomorrow's latest releases