You Can't Take It With You

Director Frank Capra titled his acclaimed autobiography 'The Name Above the Title,' and 'You Can't Take It With You,' an adaptation of the Pulitzer Prize-winning Broadway comedy by George S. Kaufman and Moss Hart, marked the first time his moniker appeared in that rarefied position. Capra's undisputed standing as Hollywood's top director during the mid-1930s gave him carte blanche at Columbia Pictures, and he selected 'You Can't Take It With You' as his next project after seeing the play in New York. Studio chief Harry Cohn, a legendary cheapskate, paid the then-princely sum of $200,000 for the play's rights, and with help from collaborator Robert Riskin, Capra revamped parts of the story to fit his social ideology while wisely retaining the madcap humor that made the show such a success.

The result is an intensely human comedy-drama that's quintessentially Capra-esque as it celebrates the common man and his unyielding perseverance in the face of such intimidating forces as big business bullies, a conceited upper class, and the vagaries of life itself. Sandwiched between such Capra classics as 'Mr. Deeds Goes to Town' and 'Mr. Smith Goes to Washington,' 'You Can't Take It With You' is the centerpiece in a formidable triumvirate of socially conscious films that spout timeless themes and enduring values. Though in many ways it's the weakest of the three, the movie earned a distinction the others didn't, winning the Best Picture Academy Award in 1938 and garnering Capra his third and final Best Director Oscar.

A bit dated by today's standards and flaunting an unvarnished innocence that's often difficult to accept in this cynical day and age, 'You Can't Take It With You' loudly preaches a meaningful message that's worth heeding, especially by those who value material possessions and the pursuit of a buck over life's simpler pleasures. The movie's first half embraces all the elements of screwball as it depicts the chaotic existence of the Vanderhof/Sycamore clan, a collection of endearing eccentrics who all march to the beat of a different drummer. Yet as the story progresses, it evolves - like many Capra tales - into something darker and more meaningful, yet still manages to maintain its whimsical, life-affirming nature. That's the essence of Capra, and while 'You Can't Take It With You' may not execute the formula as well as some of the director's later works, most notably 'Mr. Smith' and 'It's a Wonderful Life' (both of which, coincidentally or not, also star James Stewart), it laid the groundwork for them.

Led by benevolent patriarch Martin Vanderhof (Lionel Barrymore), who shucked his career on a whim decades ago because it didn't fulfill him, the free-spirited Sycamore family lives in blissful ignorance in a cavernous Manhattan townhouse coveted by Anthony P. Kirby (Edward Arnold), a ruthless banker who must acquire the residence to complete a lucrative business deal. Unbeknownst to Kirby, his son Tony (James Stewart) has fallen in love with Vanderhof's granddaughter, company secretary Alice Sycamore (Jean Arthur), who returns Tony's affections but fears her family's modest social standing and down-to-earth attitudes won't impress the filthy rich, highfalutin Kirbys. Alice is by far the best adjusted and most normal Sycamore, but her level head can't quell her family's quirkiness.

Grandpa Vanderfhof, who spends his idle days pursuing various offbeat hobbies, lives by the mantra of "don't do anything that you're not going to enjoy doing," and his offspring follow that directive to a T. Alice's sweet yet flighty mother Penny (Spring Byington) writes horrible plays while cheerfully caring for her brood; her father Paul (Samuel S. Hinds) spends most of his time tinkering with fireworks in the basement; and her younger sister Essie (Ann Miller) dances incessantly around the living room while her husband Ed (Dub Taylor) plays the xylophone. How they all survive is a mystery; no one works and they don't pay any income tax because Grandpa doesn't believe in it and doesn't trust the government to use the money wisely...a viewpoint many of us share but are (rightfully) too afraid to practice.

Circumstances, however, force the polaric worlds of the Sycamores and Kirbys to collide, and the resulting fireworks - both figurative and literal - severely impact both families, setting up a rather serious final act that tests relationships, threatens futures, and forces a debate over the proper way to lead one's life. The romance between Tony and Alice, which dominates the film up to this point, takes a back seat to the ideological battle between Vanderhof and Kirby, who struggle to find common ground. In his autobiography, Capra calls the conflict "devour thy neighbor versus love thy neighbor," saying it pits "a bankful of money against a houseful of love" and explores "the viability of a lamb when confronted by a lion." And by shifting the play's focus away from the young lovers and onto the crusty old men, Capra heightens the story's relevance and gives the characters more dimension.

Like many Capra films, 'You Can't Take It With You' explores such topics as taking on the establishment, disillusionment, greed, intestinal fortitude, discrimination, the importance of friends, family dynamics, following one's dreams, and the struggle for individualism in a collective, impersonal society. Sound familiar? In a number of ways, the movie is a warm-up for 'It's a Wonderful Life,' which more incisively tackles these universal themes and features not only Stewart and Barrymore, but also such identifiable 'You Can't Take It With You' cast members (and Capra stock players) as Ward Bond, H.B. Warner, Samuel S. Hinds, and Charles Lane. Both films stress the importance of community and especially family, endorse a less-is-more attitude, and depict how wealth and power corrupt the soul, but the zany elements of 'You Can't Take It With You' occasionally diffuse those vital messages...or maybe Capra's experiences in World War II further crystallized his views and enabled him to express them more powerfully eight years later in 'It's a Wonderful Life.' Whatever the case, Capra seems to relish knocking the upper class off its high horse in 'You Can't Take It With You' and extolling the virtues of average Joes and Janes who value personal warmth and contentment more than the almighty dollar.

Stewart wasn't a widely known actor when Capra tapped him to portray Tony, but his sincerity impressed the director, and his easygoing yet energetic performance catapulted him to full-fledged stardom. The inimitable Arthur, on the other hand, was a seasoned comedienne and Capra veteran (he would call her his favorite actress), and she provides the necessary sanity to anchor the film and make it relatable. Barrymore, whose crippling arthritis forced some script modifications, files a typically colorful portrayal, while Arnold is deliciously smug as Kirby, and Byington is an unqualified delight, nabbing a Best Supporting Actress Oscar nomination for her lovable turn as the perennially chipper Sycamore wife and mother. (She lost to Fay Bainter, Capra's original choice for the role, in 'Jezebel.')

In all, 'You Can't Take It With You' earned seven Academy Award nominations and remains an oft-revived stage play. (The latest Broadway incarnation was mounted in 2014 with James Earl Jones as Grandpa Vanderhof.) Though other films in Capra's canon have eclipsed it over the years, its simple yet important themes continue to strike a chord, and its earnest, winning performances enhance the story's underlying warmth. Many who watch it might detect a hint of Capra-corn, but for the most part, this engaging, often goofy, and occasionally sentimental ensemble piece is honest, straightforward, and wise...all hallmarks of one of the finest directors of Hollywood's Golden Age. 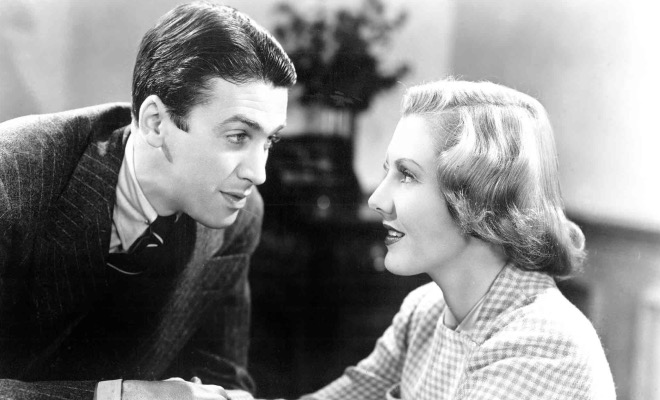 'You Can't Take It With You' arrives on Blu-ray packaged in a handsome 28-page digibook that features an insightful essay on the film's production by Jeremy Arnold; selected filmographies for Stewart, Arthur, Barrymore, and Capra; restoration notes; and a host of rare behind-the-scenes production stills, scene shots, and publicity portraits...all printed on high-quality glossy paper. A leaflet containing the Digital HD with Ultraviolet access code is tucked inside as well. Video codec is 1080p/AVC MPEG-4 and default audio is DTS-HD Master Audio 2.0 mono. Once the disc is inserted into the player, the static menu with music immediately pops up; no previews or promos precede it.

According to the liner notes, the 4K restoration of 'You Can't Take It With You' "proved to be a complicated mix and match of sources" due to the film's horrible state of disrepair and lack of any original camera negative. This 1080p/AVC MPEG-4 transfer, which looks surprisingly cohesive given the less-than-ideal circumstances, was struck from a third-generation nitrate duplicate negative and a corresponding print that contained "safety replacement sections" cut into it. Though it pales when compared to other Capra Blu-ray titles, most notably 'Mr. Smith Goes to Washington' and 'It's a Wonderful Life,' 'You Can't Take It With You' exceeds expectations, sporting a pleasing - if wildly fluctuating - grain structure and gray scale. Much of the image appears a bit faded and worn, but good clarity compensates for the weak contrast, and almost no specks, marks, or scratches dot the source material. Black levels lack the inkiness that distinguish the finest restorations, but still exude a fair amount of weight, and patterns remain stable and resist shimmering. Moments of softness come and go, and - typical of the time - close-ups flaunt a diffused gauzy quality, but considering what the restorers had to work with, this is quite an admirable effort that rightfully honors this Oscar-winning film.

Strangely enough, 'You Can't Take It With You' received an Academy Award nomination for Best Sound Recording, despite the fact that aside from an explosive fireworks sequence the film contains few showy sonic moments. Like the video, the DTS-HD Master Audio 2.0 mono track was also culled from two sources - the 1939 print and a safety fine grain master - and supplies clear, well-modulated sound with a minimum of age-related imperfections. Music is used sparingly throughout, but the long stretches of dialogue remain largely free of surface noise, and effects such as fireworks possess sufficient oomph to make an impression. The cacophony of the Sycamore household occasionally becomes a bit shrill, as does Dimitri Tiomkin's bouncy score, but most of the conversations are easy to understand and the music fills the room with ease. Dynamic range is limited and there's not much resonance to the track, but it serves the material well and does its job without incident.

Just a couple of extras enhance this classy release.

When stacked against 'It Happened One Night,' 'Mr. Smith Goes to Washington,' and 'It's a Wonderful Life,' 'You Can't Take It With You' loses some luster, but this 1938 Best Picture and Best Director Oscar winner showcases the talent and humanistic ideals of Frank Capra, who mixes farcical comedy with such identifiable social themes as individualism and brotherly love with his usual flair. Though its dated humor and inherent staginess somewhat stymie this adaptation of the Pulitzer Prize-winning play, spirited performances from Jean Arthur, James Stewart, Lionel Barrymore, and Edward Arnold keep the movie's engine humming and help the story resonate. Sony dresses up its Blu-ray presentation with slick digibook packaging that complements the movie's 4K restoration. Though the video and audio quality are somewhat lacking due to less-than-ideal elements, the restoration remains impressive, and makes 'You Can't Take It With You' a worthy addition to any film lover's Capra collection. Recommended.

Sale Price 44.43
List Price 75
Buy Now
3rd Party 44.43
In Stock.
See what people are saying about this story or others
See Comments in Forum
Previous Next
Pre-Orders
Tomorrow's latest releases