Tyrone Power stars as 19th century nobleman Don Diego de Vega, whose father, the mayor of Los Angeles, is removed from office by the sinister Captain Pasquale (Basil Rathbone), and a new corrupt "alcalde." By day, the crooked politicians rob the citizenry at every turn, and at night, Don Diego, wearing a mask, defies their laws and avenges the innocents. As he leaves his trademark - the letter "Z" - wherever he goes, he also leaves an impression on the mayor's niece, (Linda Darnell), who can't help but love the hero in disguise.

His calling card was the stuff of legend. Swiftly etched in sandstone or ripped into upholstery by his saber's razor sharp tip, the letter Z struck fear in the hearts of old California's ruling elite. The signature belonged to one man and even today means only one thing — the mark of Zorro.

Draped in a flowing black cape, his identity obscured by a Lone Ranger mask, Zorro was the Robin Hood and Scarlet Pimpernel of his day, single-handedly cleansing colonial Los Angeles of corruption and greed. Douglas Fairbanks Sr. originated the rakish role in a 1920 silent film, and Anthony Hopkins played an aging Zorro who grooms his successor (Antonio Banderas) in a rousing 1998 remake. Yet sandwiched between those portrayals may well be the definitive Zorro. Directed with artistic flair and tongue-in-cheek glee by Rouben Mamoulian, 1940's 'The Mark of Zorro' is a slick, entertaining swashbuckler made all the more memorable by a breakout performance from the dashing Tyrone Power.

Trapped for years in stuffy costume dramas and stiff romances, Power finally earned a chance to flaunt his comedic gifts and graceful athleticism as Don Diego de Vega, who by day flounces about as a pampered fop so he can masquerade as the mysterious and heroic Zorro by night. Power immerses himself in the dual role, relishing its contradictions and subtle humor, and his exhilaration carries the film. For once, the actor's breathtaking good looks don't distract; instead, they complement both sides of his character — soft and glamorous for the prettyboy nobleman, and dark and rugged for the macho bandit. In the action sequences, his deft, energetic swordplay rivals the work of Fairbanks and Errol Flynn. Almost effortlessly, Power makes Zorro his own.

Long considered a creaky melodrama, this version benefits from Mamoulian's spirited direction, which breathes new life into Zorro's story. After leaving school in Madrid, Diego returns home to Spanish California to find his father, Don Alejandro Vega (Montagu Love), relieved of his duties as the colony's leader. In Alejandro's place sits the tyrannical Don Luis Quintero (J. Edward Bromberg), ruthlessly aided by Captain Esteban Pasquale (Basil Rathbone), a sly Svengali who manipulates Quintero like a puppeteer. Together, the duo bleeds the town's residents of funds and hope until Zorro begins his honorable rampage. With flourish and panache, the masked marauder fights for the common folk, stealing from the regime and funneling the booty back to the people, all the while aiming to restore his father to power. Yet like any self-respecting swashbuckler, Zorro still finds time for romance, pursuing Quintero's niece, the shapely Lolita (Linda Darnell), on the side.

Rathbone's clipped speech and angular features make him the perfect foil for Power's elegance, and their climactic sword fight doesn't disappoint. Gale Sondergaard shines as Quintero's spoiled wife who can't hide her attraction for Diego, and the raspy-voiced Eugene Pallette is priceless as the rotund Spanish friar who disseminates Zorro's spoils.

Still, 'The Mark of Zorro' is Power's show all the way, and though he went on to play many other notable roles, he never quite duplicated the energy and unbridled joy he displays here. He and Mamoulian (as well as Darnell) would re-team the following year for a remake of Valentino's bull-fighting classic, 'Blood and Sand.' But while that film ends tragically, 'The Mark of Zorro' is pure fun, the type of entertainment that coined the phrase "Saturday matinee." With a wink and a nod, a swipe of the sword, bright dialogue, and flashy stunts, 'Zorro' will delight movie-lovers of all ages. Olé! 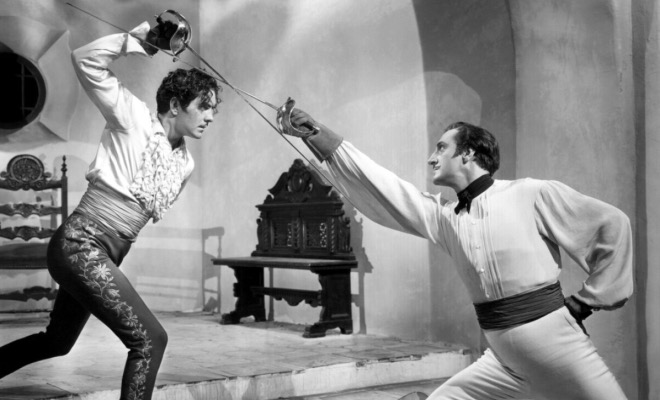 'The Mark of Zorro' arrives on Blu-ray packaged in a standard case. Video codec is 1080p/AVC MPEG-4 and audio is DTS-HD Master Audio 2.0. Once the disc is inserted into the player, the static menu with music immediately pops up; no previews or promos precede it.

The previous DVD of 'The Mark of Zorro' featured a strong transfer, but this Blu-ray release improves on that stellar effort. The 1080p/AVC MPEG-4 transfer sparkles with rich black levels, good contrast, and crisp details, all of which maximize the palpable beauty of Power and Darnell. Light grain lends the picture a complimentary nostalgic glow and solid gray scale variance enhances subtle elements in sets and costumes. Close-ups are sharp, the day for night sequences look realistic, and no crush or noise disrupt the presentation. A few nicks and marks occasionally crop up, but the image instability, fuzziness, and vertical lines that hampered the DVD transfer are not present here. Though this release does not contain the colorized version of the film (a welcome relief!), those who love this lively tale shouldn't hesitate to upgrade.

The DTS-HD Master Audio 2.0 mono track supplies clear, well-modulated sound that nicely showcases Alfred Newman's rousing, memorable score. A wide dynamic scale handles all the highs and lows with ease, and the clatter of dueling sabres, gunfire, and horse hooves nicely punctuate the action. All the dialogue is properly prioritized and easy to comprehend, and though the surface noise that plagued the DVD has been erased, just a slight bit of age-related hiss can be detected during a few quiet scenes. For an antiquated track, the 'Zorro' audio holds up quite well and should please fans of the film.

All of the extras from the previous Fox DVD have been ported over to this release.

A classic swashbuckling tale with plenty of humor and a touch of romance, 'The Mark of Zorro' offers Tyrone Power one of his most memorable roles, and the matinee idol plays the duplicitous part to the hilt. Excellent direction by Rouben Mamoulian, a rousing score, and fine supporting work from a colorful cast enhance this spirited yarn. Kino Lorber's Blu-ray presentation features upgraded video, excellent audio, and all the supplements from the previous DVD. Though it may not eclipse 'The Adventures of Robin Hood,' 'Zorro' remains a genre favorite, and this remastered disc earns a hearty recommendation.

Sale Price 19.99
List Price 29.95
Buy Now
3rd Party 14
In Stock.
See what people are saying about this story or others
See Comments in Forum
Previous Next
Pre-Orders
Tomorrow's latest releases