The Red House (The Film Detective)

Pete and Ellen have reared Meg as their own, ever since she was a baby and her parents took off. Now a teen, Meg convinces her friend Nath to come help with chores on the farm: Pete isn't getting around on his wooden leg like he used to. When Nath insists on using a short cut home through the woods, Pete gets quite agitated and warns him of screams in the night, of terrors associated with the red house. Curious, Meg and Nath ignore his warnings and begin exploring. Meg begins falling in love with Nath, but his girlfriend Tibby has other plans for him. Meanwhile they all get closer to real danger and the dark secret of the red house.

Director Delmer Daves, who later went on to make a name for himself with classic westerns '3:10 to Yuma (1957),' 'Broken Arrow' and 'The Hanging Tree,' takes the film-noir out of the crooked, sleazy underbelly of the city and places it right in the middle of the heartland in this mostly-forgotten psychological thriller 'The Red House.' The 1947 film goes through the standard motions of the genre with various gloomy shadows suggesting the sinister desires of men and women. What sets it apart, and makes it worth remembering, is that this murky story about secrets that eat away at the soul and a madness driven by crazed passion is set in the quiet, innocent community of Anywhere, U.S.A. The idea that even the most seemingly harmless towns can't escape the dark ambitions of the human heart raises the level of creepiness in this wonderfully entertaining motion picture.

Delmer Daves is not a name which quickly comes to mind when discussing classic Hollywood cinema, but he's a respected and appreciated filmmaker nonetheless with an unobtrusive yet striking style that allows an engaging narrative to be the predominant driving force of his movies. Based on the novel of the same name by George Agnew Chamberlain, 'The Red House' is an excellent example of his approach, filling the screen with some amazing but beautifully subtle images which cast a looming shadow of apprehension, even when everything appears so hunky-dory and tranquil. The opening moments fashion a rather utopic sensibility about the peaceful town, but by the end of the first act, the howling winds of an eerie forest nearby hint at something much more sinister writhing beneath it all.

Adding to the darker side of the most perfect little country township ever is the acting of Edward G. Robinson as Pete Morgan. There was no character that brilliant actor couldn't touch without making it the most compelling and memorable personality on screen. And his performance here is no different, turning an ostensibly benign and gentle farmer into a man with terrifying secrets who is capable of horrible things in order to keep them hidden. Daves takes full advantage of Robinson's presence and unique facial expressions to further the plot's endless feel of gloom with amazing shots of the actor's frightful stares. Even our introduction to the character's grim temperament is gorgeously suggested early on with a shot of his cane looking a lot like a baseball bat and continues with a mystery of how he lost his leg in the woods.

Trouble starts brewing for Pete when newly hired hand Nath (Lon McCallister) wants to take a shortcut home through those same woods on a dark, windy night. He tries to steer the brave teen away from the area with warnings of screams and something evil roaming the forest linked to a creepy red house deep inside. Of course, as teenagers are known to do, curiosity gets the better of the kid, and he invites his girlfriend Tibby (Julie London) and Meg (Allene Roberts), whom Pete and his sister Ellen (Judith Anderson) have raised since infancy, to tag along. The melodrama that grows from that triangle insinuates, however mildly, some interesting notions of our base desires fomenting from an early age, especially in the restless sensuality of Tibby finding satisfaction in the overt masculinity of local huntsman Teller (Rory Calhoun).

The surprise reveal at the end is unfortunately not as shocking as filmmakers were hoping it would be, regrettably hampered by a standard narrative that starts to feel a bit overlong, pretty much giving away Pete's terrible secret before he's even ready to admit it to himself. Yet, 'The Red House' remains a wildly intriguing and entertaining film about frustrated passions, stylishly captured in film-noir fashion thanks to the stunning photography of Bert Glennon ('Stagecoach'). Aided by a stirring musical score from legendary composer Miklós Rózsa ('Ben-Hur,' 'Spellbound,' 'Double Indemnity'), director Delmer Daves takes the dark, expressive visual style of the genre and transforms a conventional thriller set in the heartland into a beautifully evocative motion picture worth preserving. 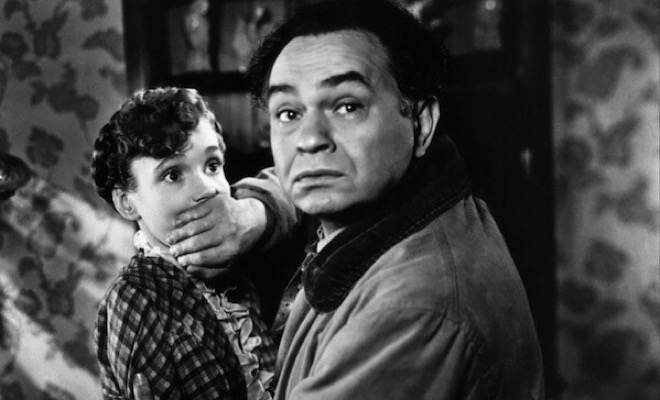 The Film Detective release of 'The Red House' arrives on Blu-ray packaged in a standard case. Video codec is 1080p/AVC MPEG-4 and audio is DTS-HD Master Audio 2.0 mono. Once the disc is inserted into the player, the static menu without music immediately pops up; no previews or promos precede it.

Much like its predecessor, The Film Detective edition of 'The Red House' suffers from source material imperfections and inconsistencies. That's not surprising, because the movie has languished in the public domain for decades and hasn't received any kind of preservational care. As a result, a fair amount of wear and tear afflicts this 1080p/AVC MPEG-4 transfer. Nicks, scratches, overly bright sequences, and a few focus issues disrupt the viewing experience, but lengthy stretches feature pleasing levels of clarity, contrast, and gray scale variance. Grain levels fluctuate, as do the intensity of blacks and whites, but the picture always flaunts a lovely film-like feel and - unlike the previous version, released by The Film Chest - appears to be free of unnecessary enhancements. Day for night scenes come across particularly well, and many close-ups exhibit a beautiful lushness, showcasing the breathtaking glamor of Julie London, the fresh-faced purity of Allene Roberts, and the studly ruggedness of Rory Calhoun, as well as the creases of Robinson's endlessly interesting face. Though not quite as successful as The Film Detective's recent rendering of 'Kansas City Confidential,' this transfer nicely revives a largely forgotten classic. Public domain films are often difficult to watch, but 'The Red House' is a refreshing exception.

The DTS-HD Master Audio 2.0 mono track is also a mixed bag, but for the most part does its job well. Early instances of mild distortion, especially during the scoring, crop up, and intermittent pops and surface noise continue throughout the film's course. At times, the brooding and melodramatic music of Miklós Rózsa exhibits an unpleasant shrillness and overwhelms the fragile track, but in more sedate moments it sounds warm and full. Accents like chirping birds, school bells, and rumbling bus engines are crisp and distinct, and the raging wind that plays a vital role in a key scene possesses plenty of power and presence. All the dialogue is clear and easy to comprehend, and numerous subtleties blend seamlessly into the film's fabric. As classic tracks go, this one leaves a bit to be desired, but considering the film's age and past treatment, it's better than one might expect.

The previous Blu-ray release of 'The Red House' included an audio commentary, trailer, and restoration comparison, but this edition is utterly devoid of supplements.

Rarely does the dirty world of film noir invade the tranquility of rural America, but that's what makes 'The Red House' so unsettling. Delmer Daves' creepy tale of a crippled farmer's shameful secret and twisted obsession may be hampered by a predictable payoff, but the lead-up keeps us intrigued and engaged. Strong performances from Edward G. Robinson, Judith Anderson, and a cast of attractive up-and-comers, as well as Daves' assured direction, heighten the film's impact and help mask the story's deficiencies. The Film Detective's Blu-ray presentation doesn't include any extras, but the video and audio transfers are solid enough to almost make us forget this is a public domain title. If you own the previous Blu-ray edition, an upgrade isn't necessary, but if you don't, and you're a film noir or Robinson fan, you might want to give this provocative rarity a look.