Screen icon Tony Curtis (The Vikings) blends hard-hitting toughness with humor as a Marine who must battle Japanese soldiers, private demons and fellow Marines in this gripping World War II saga. Bristling with suspense and rugged action, Beachhead is a classic war drama that delivers plenty of emotion-stirring heroics. Four Marines embark on a hazardous island mission to verify reports about a secret Japanese minefield. The intelligence comes from a French planter - who may or may not be an Allied spy - and his beautiful daughter. If their story is true, can the Marines outgun their enemies, make it through the treacherous jungle, and rendezvous with American forces in time to prevent disaster? Hollywood veteran Stuart Heisler (The Glass Key) direct this gripping war adventure featuring strong performances by Frank Lovejoy (The Hitch-Hiker), Mary Murphy (The Wild One), Edward Franz (Hatari!) and Skip Homeier (The Gunfighter).Special Features: Trailer Gallery

World War II has certainly spawned a number of action-adventure films over the years. It feels like every few years Hollywood and other foreign studios go back to that well in order to pull up some new cinematic material. Sometimes it's a genuine work of filmmaking where war is shown as a tragic and visceral experience, other times World War II is used as the backdrop for an action-thriller that borders on exploitation - but can be a lot of fun. 1954's 'Beachhead' directed by Stuart Heisler and produced by Aubrey Schenck and stars Frank Lovejoy, Tony Curtis, and Mary Murphy on a daring mission to thwart the Japanese efforts to prevent the American invasion of the French Polynesian islands.

When you're a Marine, no mission is an easy one. After the successful but damaging victory at Guadalcanal, Sgt. Fletcher (Frank Lovejoy) and the survivors of his platoon Burke (Tony Curtis), Reynolds (Skip Homeier) and Biggerman (Alan Wells) know that war is a deadly business to be in. Believing that Fletcher is an inexperienced and therefore dangerous CO to work under, the men are reluctant to go into any fight with the man. Unfortunately, orders are orders and the men are sent on what amounts to a suicide mission behind enemy lines to locate a French Farmer known as Bouchard who claims to know the location of the Japanese minefield.

As the team sets out on their mission, their orders are to avoid the Japanese troop divisions. Unless direct fighting is absolutely unavoidable, they're not to give away their position or risk the success of the mission. However, as they quickly learn, not dying in the line of duty is harder than it sounds. When the last two men standing are Burke and Fletcher, tensions rise as they try to find Bouchard. When they finally locate Bouchard (Eduard Franz) they're shocked to learn the man's daughter Nina (Mary Murphy) is there with him. Along with Bouchard and his daughter, Burke and Fletcher will have to work to set aside their differences and secure a radio in order to ensure that the invasion force doesn't march right into a deadly trap. 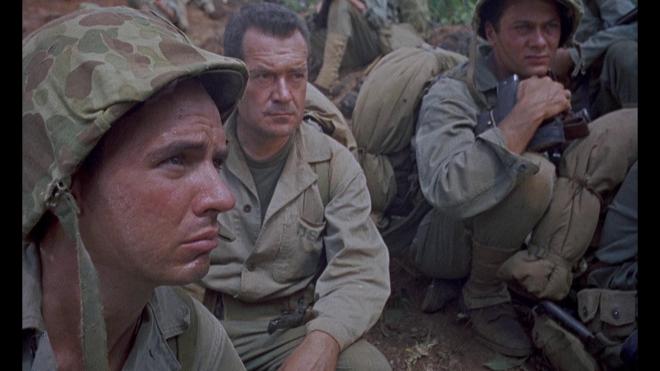 'Beachhead' plays strongest as a tense action-thriller focusing on the strained relationship between Fletcher, Burke and the rest of the men. Burke is a soldier who has seen more than his fair share of death - especially of those who he came to know as friends and comrades. Because they died under orders, it's easy to blame the man who gave those orders as the reason for their death. This dynamic is where 'Beachhead' succeeds, this level of distrust and tension keeps the pace moving. Once Fletcher and Burke meet up with their contact, the film unfortunately, deviates into a strained romantic subtext as both men begin to have feelings for the beautiful Nina. While this bit of plot does manage to add some extra tension to the scenes, it feels like unnecessary padding to what was already a lean and tense film.

Overall 'Beachhead' is an entertaining and enjoyable watch. Tony Curtis delivers a fine performance, even if his perfect hair makes you wonder where he stores his can of Dapper Dan. Frank Lovejoy is perhaps the most nuanced of the pack leading to an introspective performance of a man racked with guilt over past failures and demanding more of himself than is physically possible. Eduard Franz does a fine job in his limited role as Bouchard and Mary Murphy is thankfully not treated as a damsel in distress and is instead a strong woman of action who isn't afraid to pick up a rifle and use it.

Going into 'Beachhead' you may feel like you've already seen this flick - and considering producer Aubrey Schenck essentially remade the film in 1966 with 'Ambush Bay' - this movie is worth the time you put into it. It's not a true war drama but it isn't a cheap exploitation action movie either. 'Beachhead' proves to be a nice little character drama with some decent action beats tossed in to spice things up. If you're a fan of the war genre, put this one on your watch list. I'm pretty confident you'll come out of it entertained.

'Beachhead' arrives on Blu-ray thanks to Kino Lorber and their Studio Classics line. Pressed onto a Region A Locked BD25 disc, the disc is housed in a standard Blu-ray case. 'Beachhead' opens directly to the film's static image main menu with the score playing in the background.

'Beachhead' makes for a decent move to Blu-ray with a 1.66:1 1080p transfer. Overall, the image is pretty good, the print this transfer was sourced from exhibits some age-related wear and tear in the form of mild speckling, but nothing too terrible or distracting. With film grain intact there is a lot of fine details on display, from costuming to the lush Hawaiian location scenery to even Tony Curtis' perfect hair. Where this transfer gets into some rough territory is during the film's numerous day-for-night photography. Black levels during these scenes are inconsistent and the image has a tendency to lose finer details and flatten out. When the sun is out and the scene is properly lit, 'Beachhead' looks pretty great. When things get dark, the grain field gets a little noisy and the speckling becomes more apparent. For a 60-year-old catalogue title, this isn't too bad.

'Beachhead' arrives with a strong DTS-HD MA 2.0 audio track. Dialogue is crystal clear and never an issue to hear. When the action kicks in the track picks up a lot of strength and power and lets the explosions and gunfire kick the lower registers into gear and it sounds powerful. An oddity to the track is that the score from Arthur Lange and Emil Newman tends to sound on the tinny side of things and during big numbers has a slight tendency to overpower the rest of the mix. I'm not sure if this is how the film's always sounded or not, but it does become a bit distracting in some moments. Not a deal breaker by any means, but I thought it worth mentioning. All around this is a fine track and serves the nature of the movie.

'Beachhead' may not be the finest World War II film ever made, but with a solid cast and compelling story, it certainly is entertaining. Kino Lorber brings the film to Blu-ray in fine order with a solid A/V presentation that may show a little wear and tear but isn't bad for a 60-year-old title. Extras are only a set of trailers. The movie itself makes this disc worth a look.

Sale Price 16.1
List Price 29.95
Buy Now
3rd Party 16.1
In Stock.
See what people are saying about this story or others
See Comments in Forum
Previous Next
Pre-Orders
Tomorrow's latest releases