General MacArthur doesn't know it, but he's headed for an ambush. Hugh O'Brian (Ten Little Indians), Mickey Rooney (The Secret Invasion) and James Mitchum (Trackdown) star in this top-notch WWII nail-biter that'll keep you on the edge of your seat with consistent excitement right until the explosive end. A marine patrol secretly lands on the Japanese-occupied island of Siarago. Their mission: to locate a Japanese-American girl with vital information concerning General MacArthur's pending Philippine invasion. What they uncover instead is a Japanese plot to detonate underwater mines as the US fleet enters the bay. Cut off from outside communication, these brave marines must find a way to prevent what could be the worst naval tragedy from ever happening.Special Features: Trailer Gallery

Have you ever sat down to watch a new movie and suddenly felt like you've already seen what's on the screen? I don't just mean that you've gone to see one of the numerous reboots or remakes of fan-favorite flicks, I mean like the plot and the character relationships and story beats are so strikingly similar that you wonder if you're watching a ripoff of another movie. I know this happens a lot as content is regurgitated over and over again, but it was a relatively new experience for me to watch two films back to back that wound up being the exact same movie. Even more startling was learning they were produced by the same person. Ron Winston's 1966 film 'Ambush Bay' is an exciting and often times thrilling WWII action-adventure flick that is a virtual beat for beat retelling of Stuart Heisler's 1954 film 'Beachhead' and both films were produced by Aubrey Schenck. While 'Ambush Bay' may be a very familiar movie, it does enough different to stand on its own and prove to be a solid character-driven adventure movie.

With American forces set to retake the Philippine Islands from the Japanese ushering in the return of General MacArthur, the invasion needs to go off without a hitch. As incoming intelligence from a spy by the name of Miyazaki suggests, the Japanese have mined the strait in which the U.S. Navi intends to pass it's fleet through. If there are mines, that means a number of lives and valuable vessels would be needlessly lost. In order to corroborate this information, a platoon of men lead by Sgt. Corey (Hugh O'Brian) and Sgt. Wartell (Mickey Rooney) must make a stealth incursion onto the Japanese-held island of Siargao in order to find Miyazaki (Tisa Chang) and radio the position of the mines to the incoming fleet. Throwing a wrench into the plan is the presence of the green radioman Pvt. Grenier (James Mitchum). Grenier hasn't seen a day of combat or fired a single bullet in his life - but he's the only man capable of getting the job done on such short notice.

If you've already read my review for 'Beachhead' you're possibly feeling like you've read about this plot already. 'Beachhead' and 'Ambush Bay' are virtually identical in almost every way possible. Aside from a bigger budget and actually shooting on location in the Philippines, there is very little to differentiate the two. Both films explore the character motivations of a commanding officer who is driven to ensure the success of the mission at any cost. Both films feature a female love interest half way into the second act, and both films come down to wire if our heroes are going to succeed with their strikingly similar missions. While you could debate which one tells the story better, I would say it comes down to personal preference. Both films are genuinely fun and exciting works of adventure entertainment in their own ways. 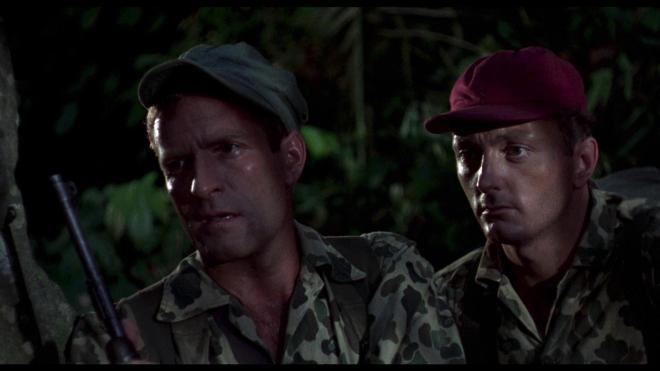 For its part, 'Ambush Bay' stays more focused on the men and their mission at hand. As this movie is seen through the eyes of James Mitchum's character Grenier, we get to know him a little better, hear his thoughts about his fellow marines, and also develop a bit of empathy towards Hugh O'Brian's Corey and Mickey Rooney's Wartell. Corey and Wartell are two men who have already seen a lot of war and are exhausted from it - but they know this mission is vital and its success more important than the lives of a small company of soldiers. So the two men do their duty and expect the soldiers under their command to do the same. We get a lot more character depth with 'Ambush Bay' and having a character like Grenier to serve as the Audience's surrogate goes a long way towards helping the themes of this movie resonate.

That isn't to say that 'Ambush Bay' is all character and no action - there's plenty of guns and explosions, as well as a tension-filled chase sequence that keeps this little action-adventure movie chugging along at a pretty good clip. Unlike 'Beachhead' it doesn't spend nearly as much time on the romantics of having a woman in a company of soldiers. Sgt. Corey is clearly attracted to Miyazaki, but they don't burn screen time talking about it. And, if you've seen Roger Corman's 1964 movie 'The Secret Invasion,' you know it's a lot of fun to watch Mickey Rooney play a total badass! If there is a weak link in this film, I would have to put the weight on James Mitchum. He's a decent enough actor and does a solid job as Grenier, but he doesn't have the natural swagger or charisma of his father Robert Mitchum to make the character stand out. It's ultimately a role that could have been played by anyone.

All in all, 'Ambush Bay' proves to be a lot of fun. I wouldn't say it's better or worse than 'Beachhead' it's about on par. Both movies take on the same story but they do it in their own unique ways. It was actually an interesting experience to watch both films back to back not realizing they're virtually the same movie. I had a couple fun little déjà vu moments as 'Ambush Bay' started rolling, but once it settled into its own groove it became a good bit of fun. My recommendation is to give them both a look, they're worth the time you put into them and feature some solid WWII action.

'Ambush Bay' arrives on Blu-ray thanks to Kino Lorber and their Studio Classics line. Pressed onto a Region A locked BD25 disc, the disc is housed in a standard Blu-ray case and opens directly to a static image main menu.

With a 1.85:1 aspect ratio, this 1080p presentation of 'Ambush Bay' has probably seen better days, but it's still in pretty decent shape. The biggest problem for this film is that almost the entire first third of the film was shot day-for-night. Because of this, colors don't really move beyond smears of deep greens, blacks, and some occasional blue. Details are lost in these scenes and at times it can be difficult to tell who or what you're looking at. Black levels also suffer as the film doesn't offer much shadow separation during these moments so depth is lost leaving the film rather flat looking. Once the sun comes out and there is some actual light to appreciate, the film looks strikingly better. All of a sudden you can take in the lush location scenery and enjoy the bright primaries and finer details. The print sourced for this transfer is in pretty good shape, some mild speckling is the worst of the damage. During the film's few optical effects and zooms, there is a noticeable amount of dirt and debris - but there's very little that can be done to fix that, and the shots only last a handful of seconds. All around for a 50-year-old movie what hasn't undergone a true restoration effort, this transfer is actually pretty good.

With a strong and natural sounding English DTS-HD MA 2.0 audio track, 'Ambush Bay' has a lot of pop and presence to its audio mix. Dialogue is crystal clear and never an issue to hear. Imaging is strong as there is a sense of directionality as to where gunshots are being fired from or foot falls in a jungle. For the most part the audio keeps to the midranges and lets the score by Richard LaSalle pull up the lower registers when there needs to be a bit of tension and drama to the scene. Levels are spot on, even during the heavy action beats or the big finale moment there isn't much of a need to adjust volume any. I did detect a couple tiny pops in the audio and a slight bit of hiss, but unless you're really listening form them they're easy to miss and don't really impact the experience - but are still worth mentioning. All around this is a solid audio track that works to the advantages of the movie.

While 'Ambush Bay' may be a virtual remake of 'Beachhead,' it proves to still be a fun and oftentimes exciting WWII action-thriller. Kino Lorber has brought this film to Blu-ray in decent shape. The Image may be a tad too dark at times but overall is a solid transfer. The audio mix does its job well enough and extra features are an assortment of trailers. Worth a look.

Sale Price 19.72
List Price 29.95
Buy Now
3rd Party 14.99
In Stock.
See what people are saying about this story or others
See Comments in Forum
Previous Next
Pre-Orders
Tomorrow's latest releases