Twilight Time has made a name for itself over the years due to the fact that they've limited their Blu-ray releases to just 3,000 copies – telling buyers that when they were sold out, that's it, that's all, you'll never see them again. Then, not so long ago, they made the decision to re-issue some of those sold-out titles that had flown off the shelves, with the caveat that they were different than the prior releases. Such titles came with new bonus materials, such as the re-issue of Fright Night, or a newly remastered transfer, such as the re-issue of Journey to the Center of the Earth.

But now Twilight Time is offering up a re-issue of 'Thunderbolt and Lightfoot' and what's different about this release? Nothing. Unless you count the different main menu, keepcase slick, disc artwork, and artwork for the enclosed booklet. But the transfer itself and bonus materials (not counting an updated version of the Twilight Time catalog that they put on all releases) are exactly the same, which kind of ruins the limited edition status of both this and the 2013 release, doesn't it? It wouldn't be a big deal if Twilight Time didn't charge such a premium for their Blu-rays (typically $29.95 for a new release), but one can't help but become a little more suspicious about their whole "limited edition" scheme if every title that does sell out is just going to get re-released a few years down the road.

Anyway, for better or for worse, here's another look at 'Thunderbolt and Lightfoot'.

The pieces that came together in 1974 to make 'Thunderbolt and Lightfoot' are almost as interesting as the completed movie itself. Clint Eastwood, whose Malpaso production company had almost exclusively worked with Warner Bros., jumped ship and went to United Artists when Warners thought the script for the movie wasn't mainstream enough for box office success. Clint and Malpaso were set to make two movies for UA, but then Eastwood felt the studio bungled the promotion of 'Thunderbolt and Lightfoot' so poorly that he vowed never to work with them again.

Director Michael Cimino wrote the script with the idea and intention that Eastwood would direct the movie. However, Clint became so impressed with Cimino (who had already worked on the script for Eastwood's 'Magnum Force') that he decided to give him his big break in Hollywood and let him direct the movie himself. As for Jeff Bridges, he had already been nominated once for a Best Supporting Actor Oscar for The Last Picture Show and would be nominated a second time for his portrayal here of Lightfoot.

Filmed in the 'Big Sky' area of Montana, 'Thunderbolt and Lightfoot' is a road picture, a buddy movie, and a caper flick all rolled into one. As the movie opens, we see Eastwood (whom we'll later find out has the nickname 'Thunderbolt') as a preacher in a church, whose sermon is interrupted by a gun-toting Red Leary (George Kennedy) – causing the congregation to scramble and Thunderbolt to run for his life. During his escape from Leary, he jumps in a Trans-Am (a full three years before Burt Reynolds would make them the get-away cars of choice) that has just been stolen by Lightfoot (Bridges).

After traveling through the countryside together, still in pursuit by Leary and his partner, Goody (Geoffrey Lewis), Thunderbolt eventually tells Lightfoot the story behind why he's being hunted: a while back, Thunderbolt, Leary, and Goody were all part of a gang that stole $50,000 from a Montana armory. Leary wound up going to jail, where the cops told him Thunderbolt had taken the $50,000 and disappeared. The truth is that the money was actually hidden in a small schoolhouse. However, when Thunderbolt and Lightfoot go to the schoolhouse's location, they discover it has been replaced with a brand-new school, and the location of the money (or if it was ever discovered) remains a mystery.

Leary and Goody catch up with Thunderbolt and Lightfoot, but before they can decide whether they're going to kill them or not, Lightfoot suggests that they just repeat the heist of the same Montana armory the other three men stole from before. At first, Leary thinks it's a silly idea, but when it occurs to everyone that no one would suspect the same place being robbed a second time, they start putting a plan in motion for the heist, which includes the men finding local jobs to establish themselves in the community.

At first glance, 'Thunderbolt and Lightfoot' can be passed off as just another Eastwood vehicle that borrows from some 'buddy' movies that came before it (and would serve as a template for many that followed it), most notably 1969's Butch Cassidy and the Sundance Kid. However, Bridges brings such a fresh, boyish, 'gee whiz' attitude to his character, that he all but steals the movie from Eastwood who, while getting top billing, is really playing a supporting character here. Bridges is the star of the film, and his Oscar nomination for the movie is well-deserved.

There have been many takes on this film over the years that suggest that the character of Lightfoot is homosexual and that the movie is about the otherwise straight Thunderbolt eventually falling in love with him. Others will argue that that's a load of postmodernism hooey. Personally, I never picked up on the context the first time I watched the movie, but being aware of it going into this viewing of the film, I will say the subtext is certainly present and think it should be left up to each individual viewer to decide. Like many Eastwood films (regardless of whether he directed them or not) there's a sense of ambiguity here involving the relationship between the two leads that I quite like.

For me, the biggest head-scratcher here is why it took so long for 'Thunderbolt and Lightfoot' to make it to Blu-ray, and why MGM didn't think enough of the film to give it a special edition themselves rather than hand it off to Twilight Time for a limited release (as noted above, this is actually the <i>second</i> "limited release by Twilight Time). Regardless, fans of both Eastwood and Bridges will want to make sure and nab a copy before these are no longer available.

'Thunderbolt and Lightfoot' return to Blu-ray in a clear keepcase from Twilight Time that houses the 50GB dual-layer Blu-ray along with a booklet featuring an essay by Julie Kirgo. Both the keepcase slick and the booklet have been re-designed for this release, although the text is exactly the same. The slick also now features a photo of Jeff Bridges and Clint Eastwood from the film on the reverse side, which can be seen when one opens the box (the initial release had no artwork on the flip side of the slick). There are no front-loaded trailers on this release, and the main menu has been updated to match the artwork of the box cover. 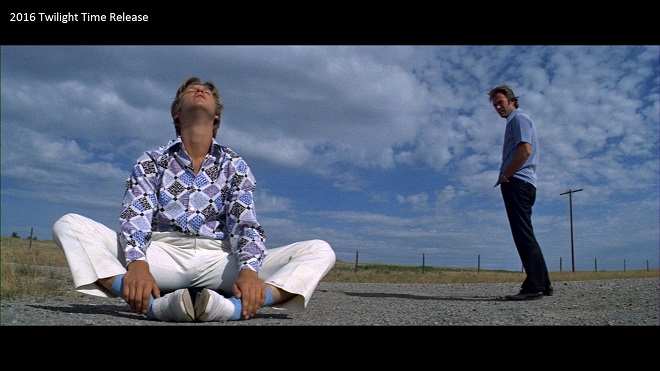 As you can see from the screenshots posted with this review, the transfer here is identical to the 2013 release.

When the opening credits first roll on this release, I had an uneasy feeling about the transfer, as those moments are heavy with grain and full of dirt and other defects from the original print. Thankfully, after the opening moments have ended and the movie gets underway, the picture quality improves drastically, although it still has some issues.

The most obvious and noticeable problem here is the amount of defects still in the print. 'Thunderbolt and Lightfoot' is set against the backdrop of the Montana countryside, and it's hard not to notice all the occasional specks of film dirt that show up in the sky or solid backgrounds every now and again. Another issue is the stabilization of the picture, which is most noticeable during the opening credits, as the image is a little shaky. This problem occurs randomly a few times more before movie's end, but it's most noticeable at the beginning. Film grain is always present, and obtrusive at times, most notably during both the opening and ending credits. Black levels are pretty decent throughout – there's a good deal of either nighttime or darker (indoor) sequences in the film, and the clarity of each is good, for the most part, although the image is much softer during these sequences.

The best thing here is that the film has retained its robust and colorful appearance, without getting into problems of oversaturation or causing colors to bloom. Skin tones lean toward the warm side, but are consistent throughout. Also, while the movie doesn't really 'pop' on the format, it does compare reasonably well with other HD transfers of 1970's titles, and background details (when the cinematographer isn't intentionally (or unintentionally) blurring them) are pretty decent. 'Thunderbolt and Lightfoot' doesn't look as good as some of the Warners transfers we've seen of Clint's older films, but minus a complete restoration, it doesn't look too bad overall.

Depending on whether you're a fan of closely repeating the original theatrical experience at home or just providing the best sound possible, buyers will either love or hate the fact that the only audio option here is a lossless DTS-HD Master Audio 1.0 mono track. That means, depending on how your sound system reads the track and how you have it set up, that you'll either get all the sound from your center speaker or you'll get it all from your front right and left speakers (but it will be the same exact audio coming from both sides).

Given the fact that the mono means there's nothing here in terms of directionality or immersiveness, the audio is pretty solid, with no obvious instances of glitches or dropouts. Occasionally, dialogue sounds a bit 'muddier' than it should but, overall, this is a solid track, with little to complain about.

Subtitles are offered in English SDH only. 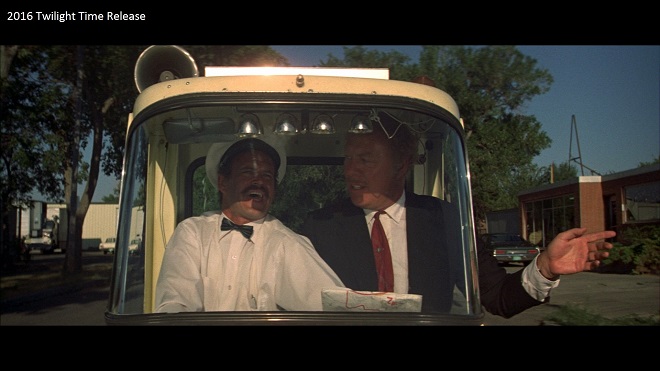 Note: Since this re-release means that a couple of the bonus materials are no longer "exclusive" to this title (since they also appeared on the 2013 release), I listed everything on this Blu-ray as non-exclusive, although potential buyers should note that the commentary track and isolated score are exclusive to the two Twilight Time releases. 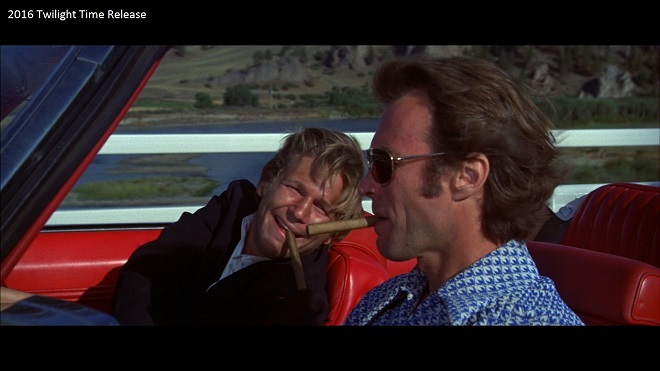 I'm an Clint completest, and if you're one too, you'll want to pick up this release before Twilight Time runs out of stock. This is one of the few movies where Clint is almost a supporting character compared to Jeff Bridges' Lightfoot, who is just full of quirkiness and energy. While the A/V quality and bonus materials provided on this release don't quite match some other older Eastwood titles we've seen in HD, they're still decent enough to make this title worthy of a spot in your collection. Recommended (strongly, if you're an Eastwood or Bridges fan).